I guess that in the United States going out and purchasing a hunting rifle is not a particularly difficult thing to do. It just requires sufficient money to buy the rifle of your choice and then, protected by the Second Amendment, you take it home and enjoy it. But for people in Europe and various other parts of the world getting a rifle can involve jumping through a series of legal and practical hurdles; so the acquisition of a rifle can be difficult and with the difficulty comes perhaps more appreciation once you have it. With that deep appreciation of getting the rifle there can also be a desire to really explore the best options for ammunition suited to the quarry you are planning to hunt. I think that for this set of reasons German ammunition maker RWS have a long tradition of making technically advanced hunting bullets and ammunition. RWS tend to be the “Porsche” of the ammunition world so just as car manufacturer Porsche make technologically advanced high performance motor cars that are something that enthusiasts covet, something of a prestige item, so RWS ammunition is also technically advanced and attractive to enthusiasts, also a prestige item. 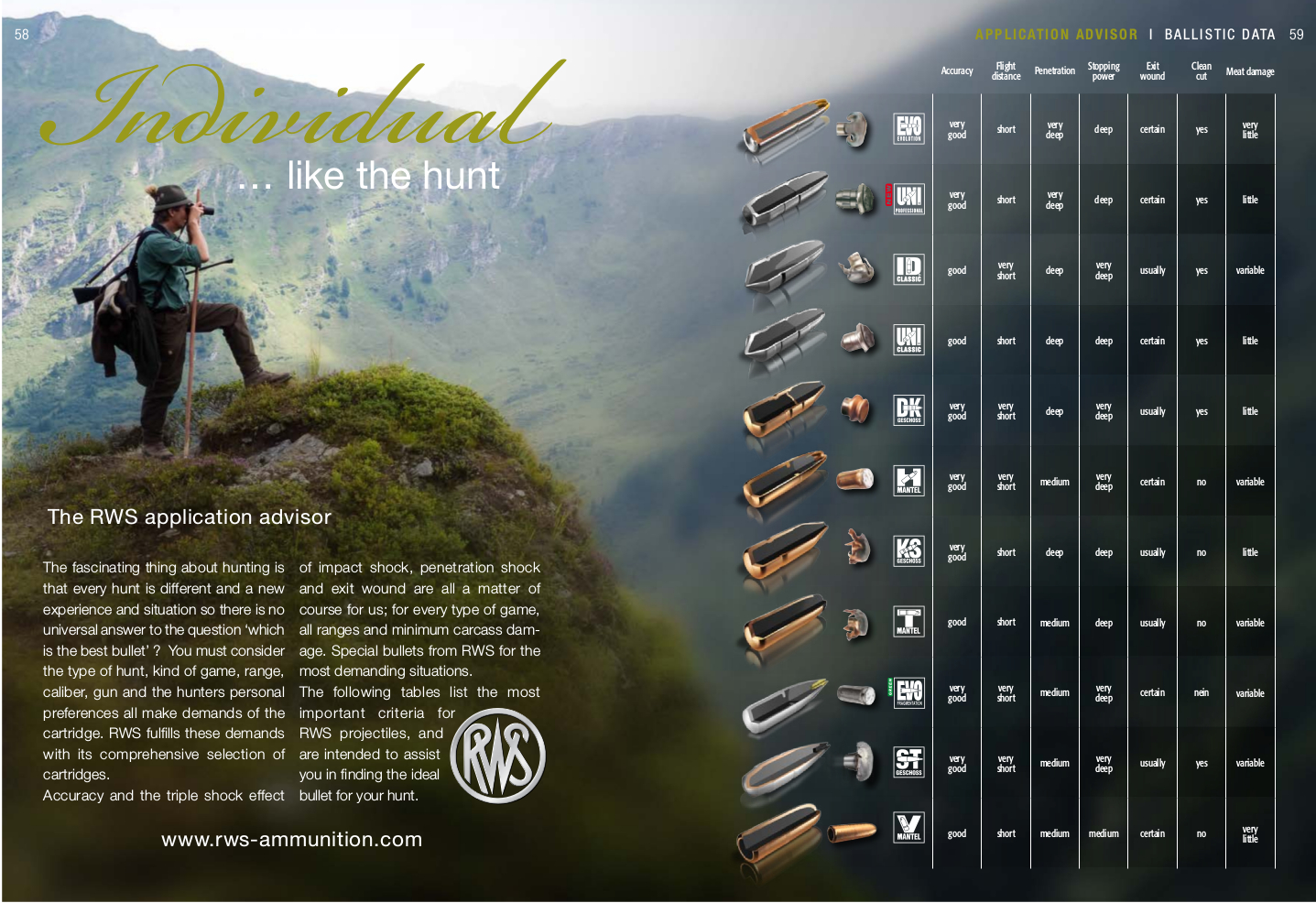 The full range of RWS bullet types is quite impressive. Not every bullet type is available in every caliber but only those best suited to the caliber.

RWS stands for “Rheinisch Westfälische Sprengstoff Actien Gesellschaft” and the company began ammunition production as “Rheinisch Westfälische Sprengstoff Actien Gesellschaft,  Munitions-Fabrik, Nuremberg,”  in 1894. The company moved to begin making technologically advanced hunting bullets during the post First World War period which included them making ammunition with Wilhelm Brenneke’s bullet designs, and with their own “H-Mantle” bullet making its debut in 1934. The H-Mantle bullet features a hard lead rear core behind a crimp in the jacket and with a soft lead hollow pointed core protected by a copper cap in the front section. The copper cap delays the fragmentation of the front section of the bullet until it has entered the heart/lung cavity at which point fragmentation takes place whilst the rear core continues to drive through ensuring an exit wound. I’ve used these bullets in .30 caliber with excellent results. 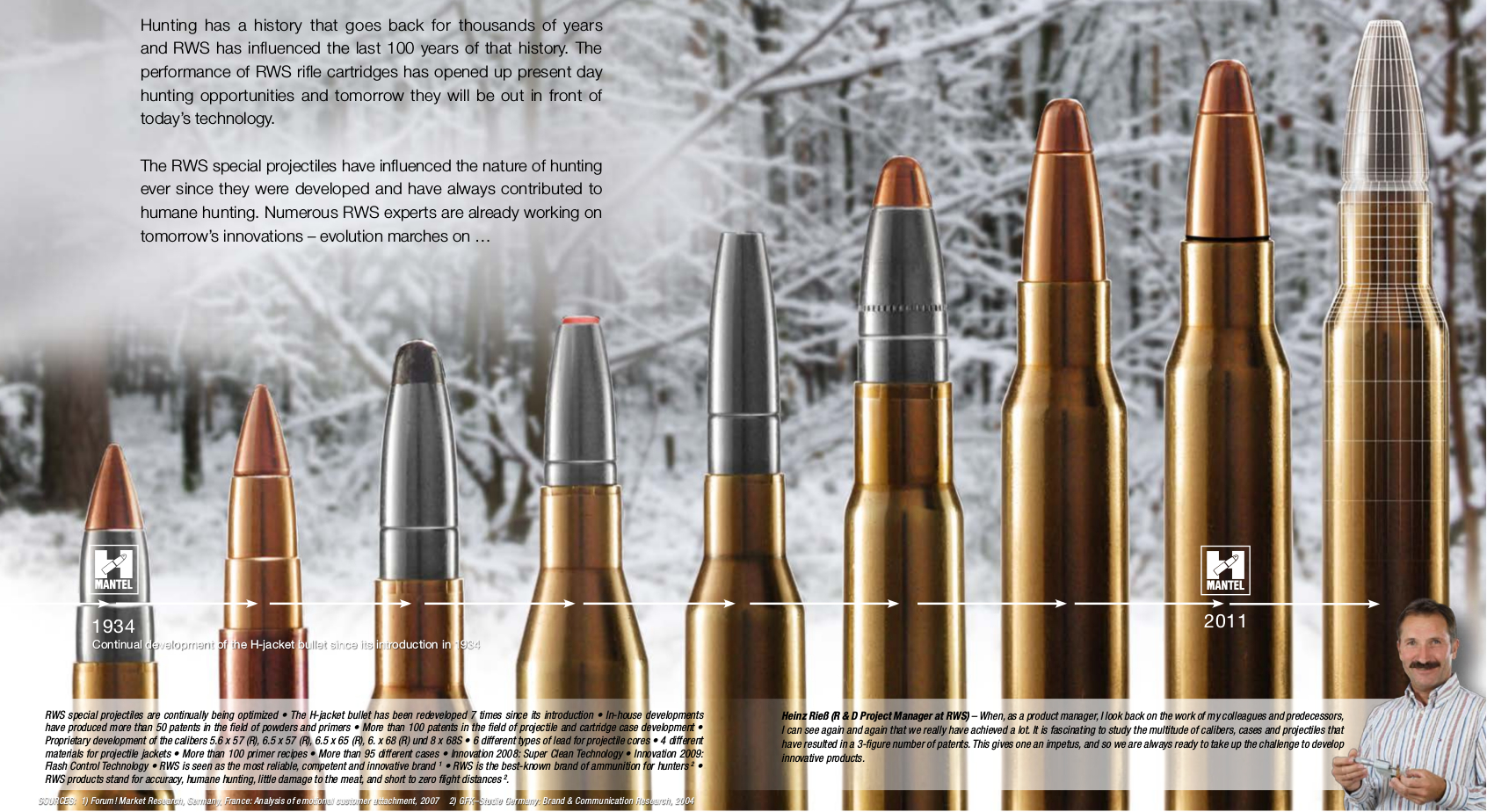 Development of RWS own premium hunting bullet, the H-Mantle, began in 1934 and continued into the twenty-first century. The fourth cartridge from the left appears to be the very unusual 123grain RWS H-Mantle bullet loading of the 6.5x68mm Schuler cartridge.

RWS continues development of their hunting ammunition and their premium hunting bullets to the present day and there are a number of new innovations that have made their appearance recently that utilize new technology, such as lead free bullets, but that also continue the technological heritage of RWS bullet designs. Some of these new bullet designs are the “EVO” Evolution which is a development of the original 1934 H-Mantle but which now uses a lead core bonded to the bullet jacket; the “HIT” which is a nickel plated copper alloy lead free bullet; the “EVO” Green, which is a dual core lead free bullet made of food safe metals, with a front core made of pre-fragmented tin designed to fragment once in the heart/lung cavity to cause maximum vital organ damage and thus a quick humane kill; and the UNI Classic which is also a dual core bullet with soft front section designed to open up whilst the hard rear core ensures an exit wound. 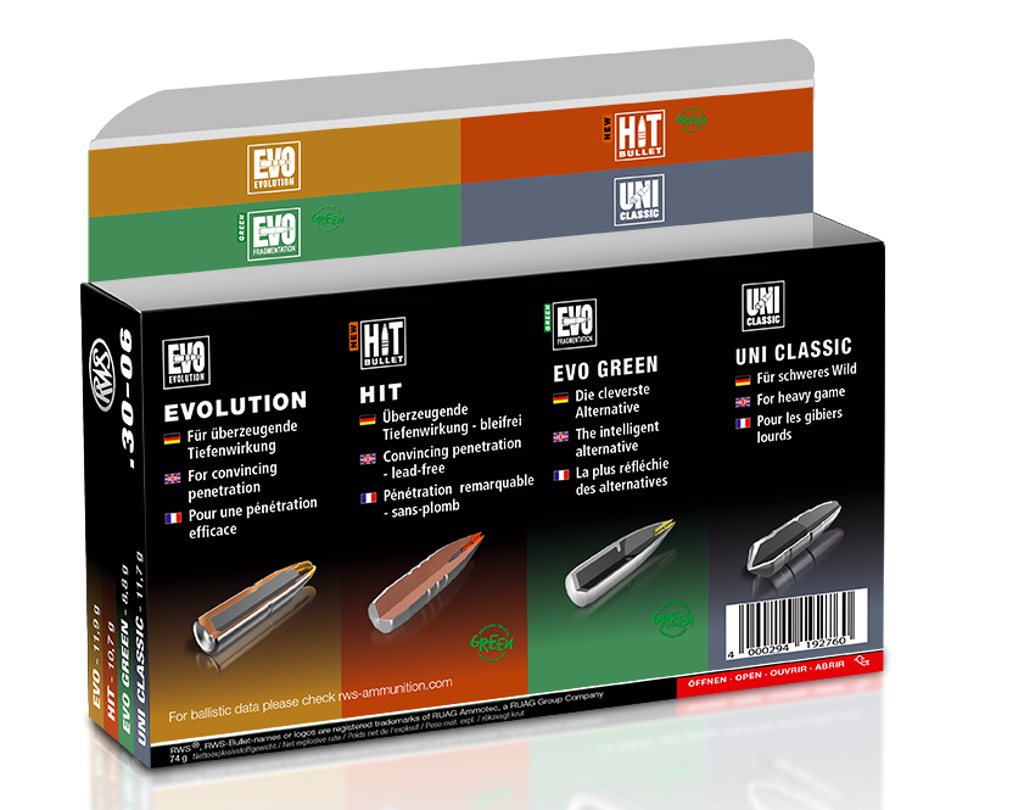 The RWS Performance Test Pack contains five rounds each of the Evolution, HIT, EVO Green, and UNI Classic bullets for hunters to try.

For shooters who would like to get just a few of each of these new RWS bullets in loaded ammunition to try RWS provide a Performance Test Pack which contains five loaded cartridges of each of these bullet types so hunters can try group shooting with each to see which might perform best in their rifle. The Performance test pack also contains four test targets so a shooter is set up to try accuracy shooting with each one and to check velocity and consistency with a chronograph if they have access to one.

The RWS Performance Test Pack is available in the following calibers with the bullets listed below:-

The test targets can also be downloaded from the RWS web site if you click here. 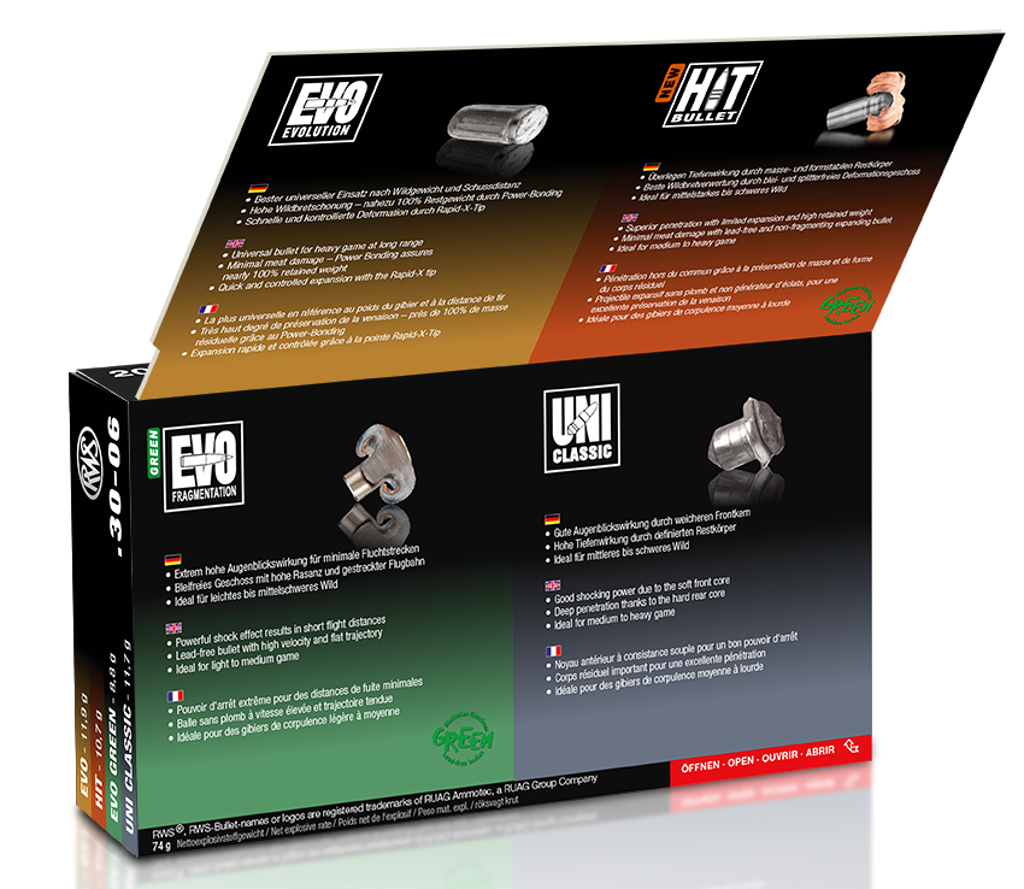 Rear of the RWS Performance Test Pack has information about each bullet’s expected performance on game.

The RWS Performance Test Pack is also quite nice for ammunition collectors who can choose to only shoot three or four shot groups and thus acquire examples of these RWS cartridges for their collection. 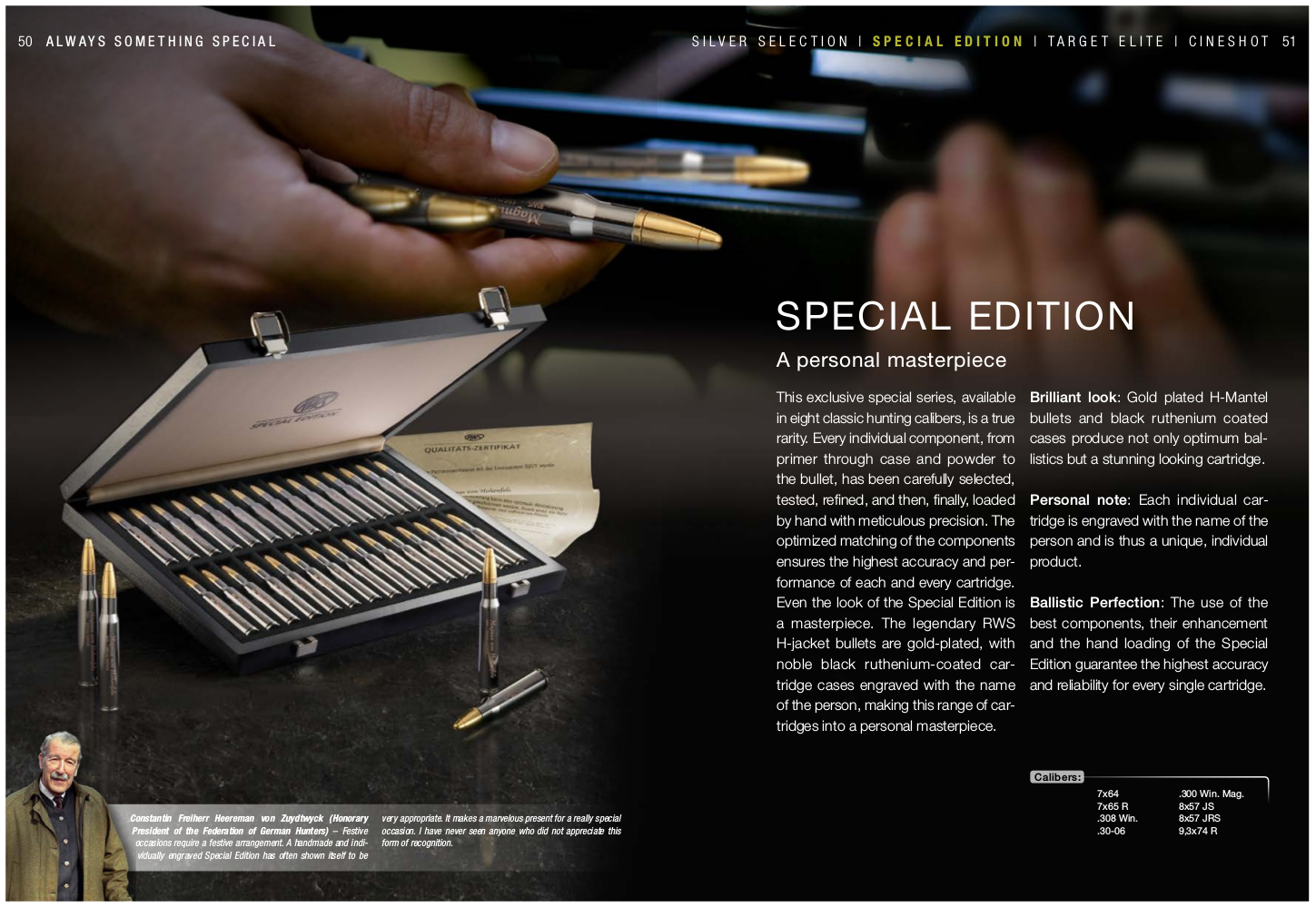 For collector/shooters and for special presentations RWS make their Special Edition cartridges loaded with the original H-Mantle bullet.

RWS also make their Special Edition boxed sets of cartridges custom engraved with the name of the person who is to be the recipient of this delightful gift. The Special Edition boxed sets are loaded with RWS original H-Mantle bullets and are made in the common European and US calibers; 7×64, 7x65R, .308 Winchester, .30-06, .300 Winchester Magnum, 8x57JS, 8x57JRS, and 9.3x74R.

You will find the RWS Special Edition boxed sets on the RWS web site if you click here.

You will find the full range of RWS ammunition and bullets on the RWS web site if you click here.

RWS is to hunting rifle ammunition what Porsche is to automobiles; sophisticated and high performance. If you are looking for the best money can buy then RWS make some of the best ammunition you could choose.