Have you ever watched dolphins playing in the water? Racing, jumping, diving and generally having a great time. Perhaps you’ve had them following your speedboat or zooming ahead of you as if to show the way. Perhaps you have wondered if a speedboat could be built that would allow you to fly through the water jumping and diving and even performing a barrel roll or two? Such a machine does in fact exist. Its called the Seabreacher and its pretty much a speedboat with the ability to jump and to dive into the water transforming the two dimensional experience of boating into a three dimensional experience.

The Seabreacher is not a submarine, it is a high performance surface craft that can dive into the water and be semi-submerged, it can also jump from being submerged up above the waves much as a dolphin can. Normally powered by a supercharged 260hp Rotax engine power is transmitted to the water by a vectored thrust system that mimics the tail articulation of aquatic animals such as dolphins.

There are three models of the Seabreacher to choose from depending on what you most want from your high performance aquatic fun. 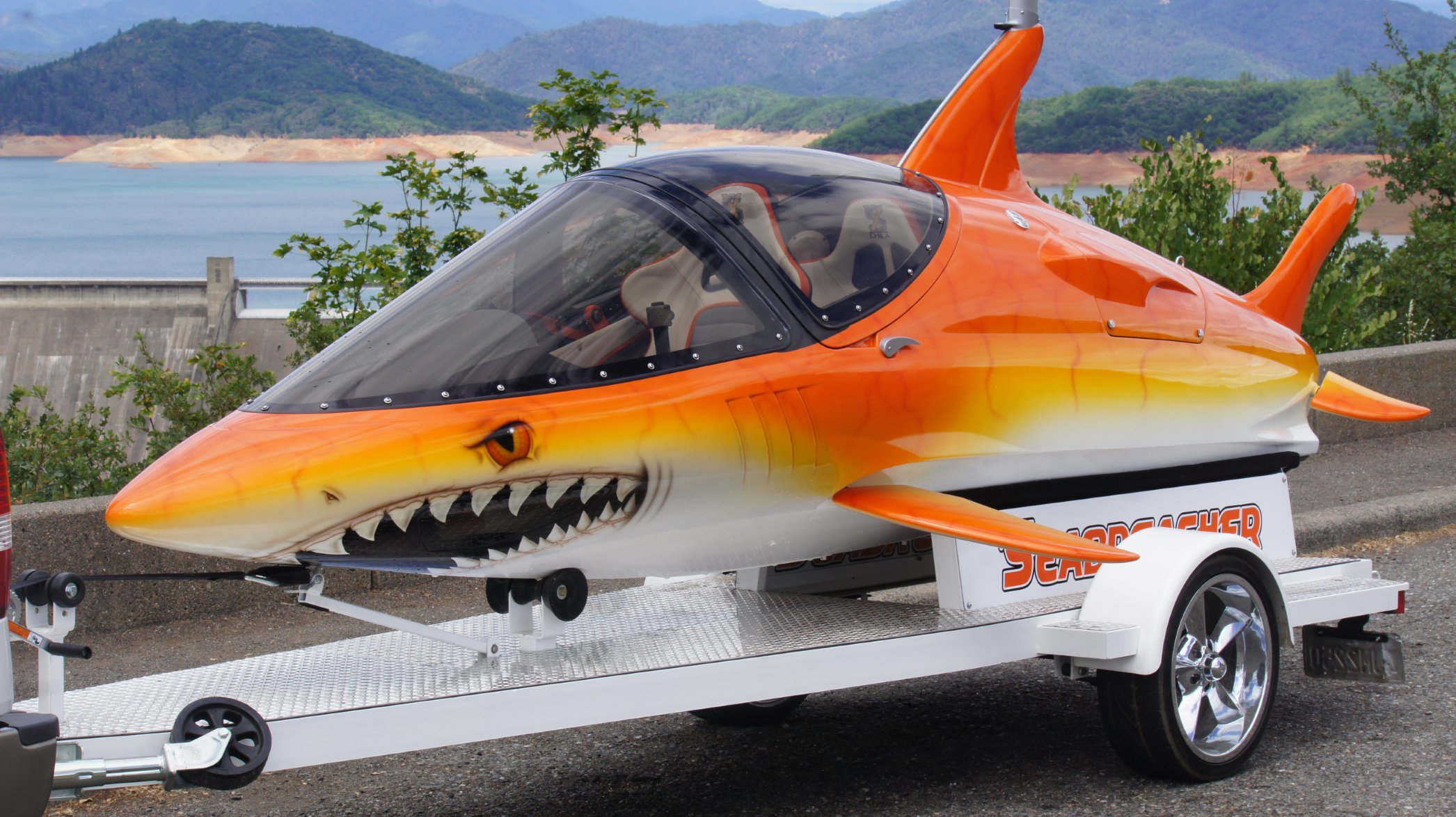 Seabreacher X on the purpose built trailer that is supplied with each Seabreacher.

The Seabreacher X is a two passenger craft that can accommodate a 6’4″ driver and 6’2″ passenger. It is powered by a 260 hp supercharged, intercooled, Rotax 1500cc 4 stroke engine. This model has relatively small control surfaces making it very agile and capable of 90° jumps out of the water. This model has underwater view ports in the “mouth” area at the front of the craft.

You will find the information page for the Seabreacher X if you click here. 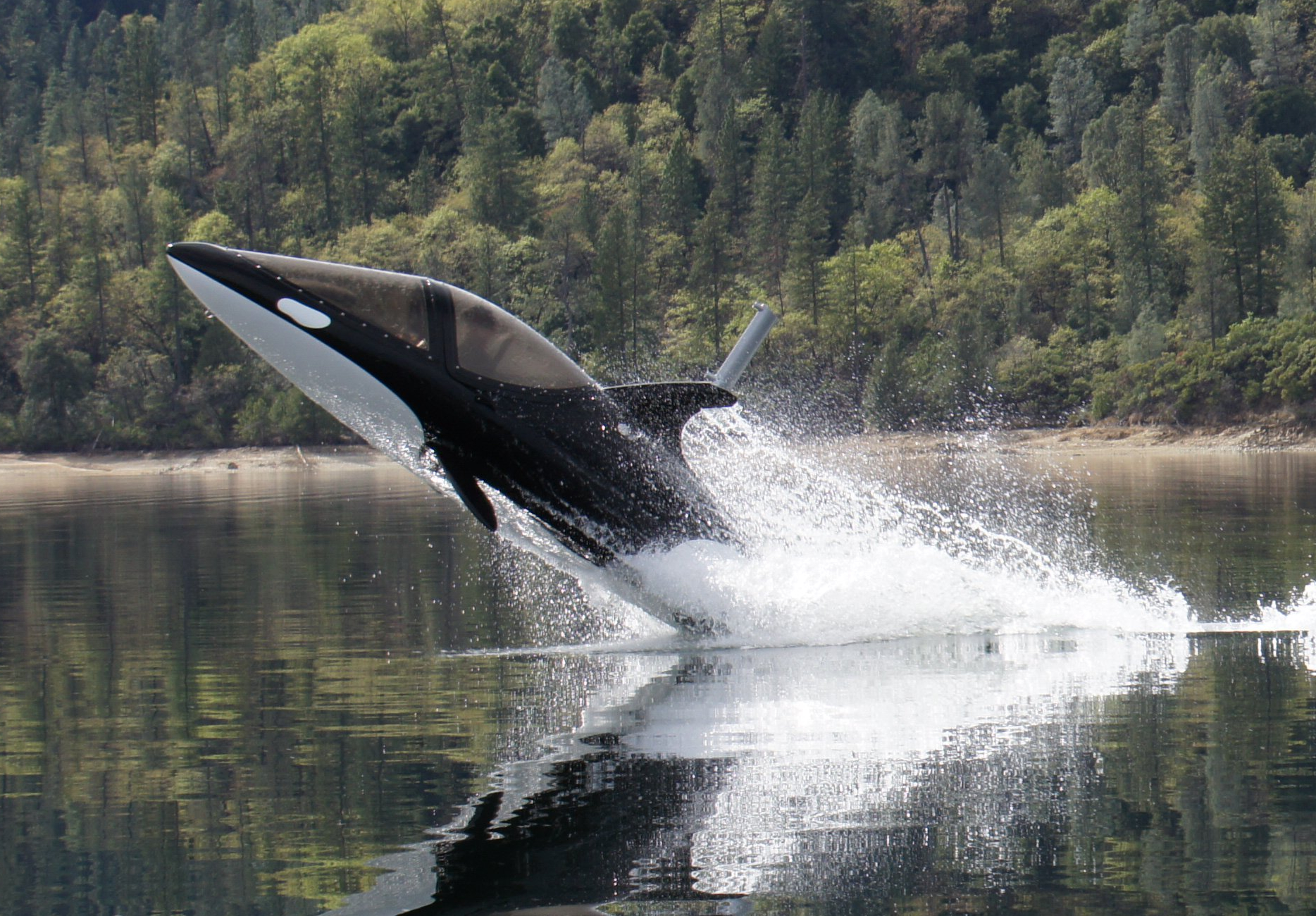 The Seabreacher Y has a full acrylic canopy so driver and passenger get a full panoramic view.

The Seabreacher Y is made in a killer whale body style and is powered by the same 260 hp supercharged, intercooled, Rotax 1500cc 4 stroke engine as used in the Seabreacher X. This model has larger “wings” and even has a “blowhole” to blast a water jet into the air.

You will find the information page for the Seabreacher Y if you click here. 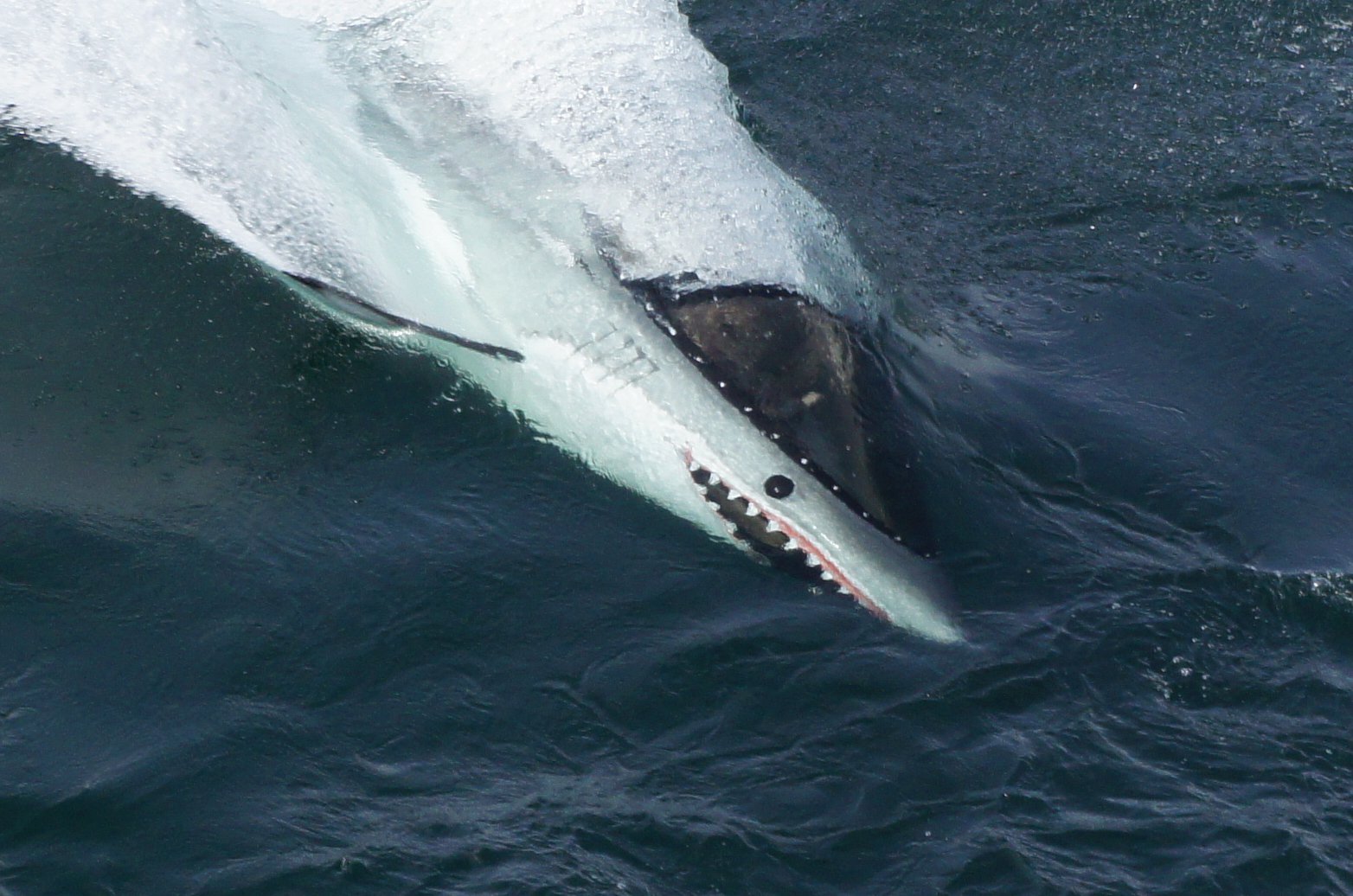 The single seater Seabreacher Z is the model you will choose if you are looking for the ultimate in aquabatic excitement. Made in a dolphin body style this model also features a retractable snorkel which enables it not only to jump and dive but also to perform full 360° body rolls. The Seabreacher Z is powered by the 260 hp supercharged, intercooled, Rotax 1500cc 4 stroke engine as used in the Seabreacher X.

You will find the information page for the Seabreacher Z if you click here.

All three models of the Seabreacher have a range of options available depending on the model including a custom trailer, custom airbrushing, and/or a strong back lifting cradle (for launching from yacht/dock)

What’s it like to pilot a Seabreacher? This video gives a bit of a taste.

The Seabreacher is quite like an aircraft to pilot. It provides three axis of control – pitch, roll, and yaw so it can carve left and right, jump over, dive under, and cut though the waves. The Seabreacher website describes the method of piloting the craft as follows:- “The hand sticks move forward and backwards and are connected to the front wing on the corresponding side. If you push them both forward, they move both wings down and it sucks the center of the craft under water. If you pull them both back the boat will get up on the plane. If you push one forward and pull one back it will roll the boat to the side and vice versa rolls to the other side.

It certainly sounds like a simple and instinctive driving experience. 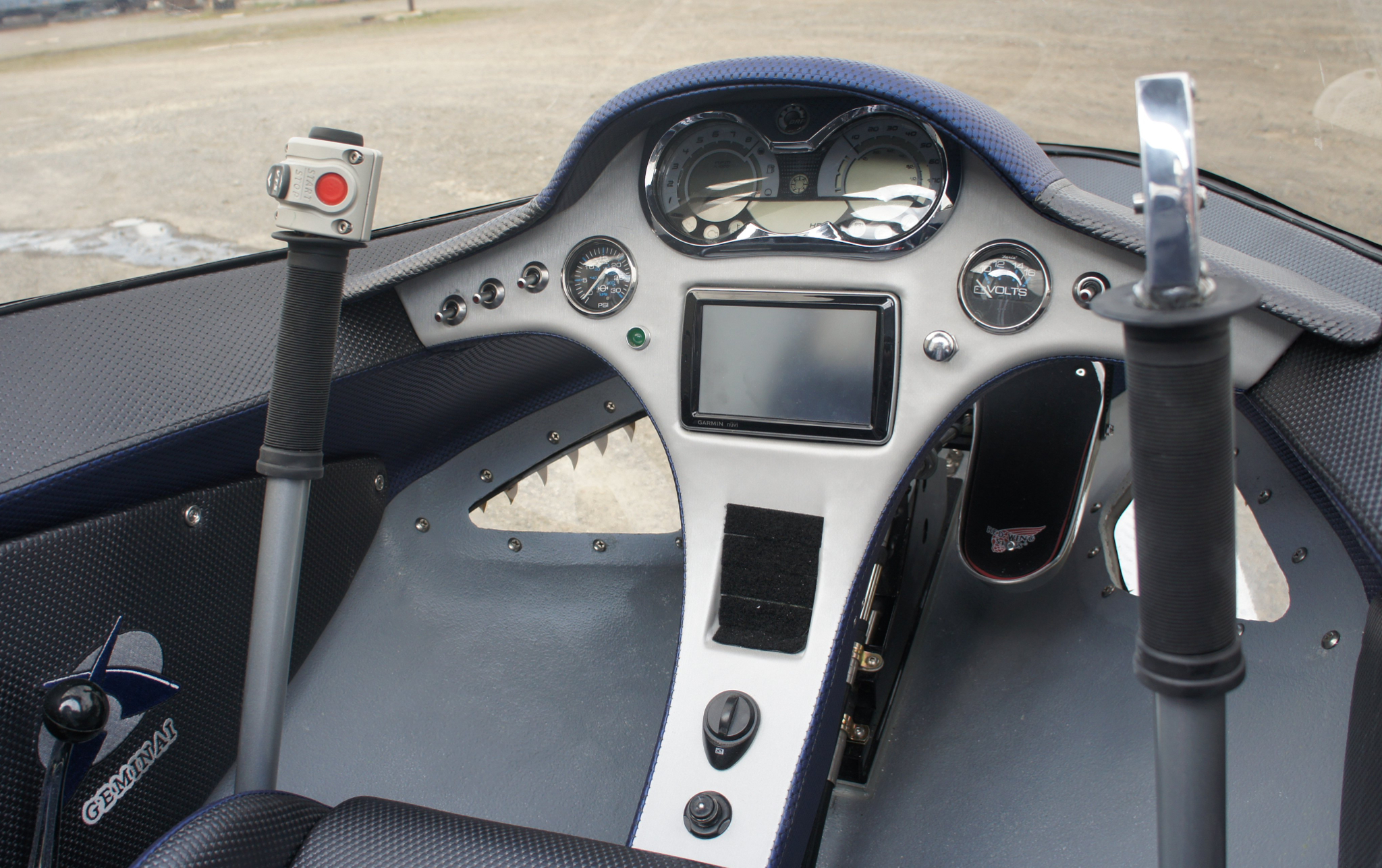 Seabreacher cockpit. The controls are kept simple and instinctive.

You will find the home page for Seabreacher at seabreacher.com if you click here.

If you would like to try the Seabreacher then you can purchase a training and try out day for USD$1000. You will find the information page on the trial and training days and Seabreacher purchase if you click here.

For many years I traveled to work by boat which was quite a nice commute but I think if I’d had a Seabreacher that the daily commute would have been a great deal more fun. If you are looking for what might just be the ultimate in adrenaline pumping fun on the water then the Seabreacher experience might be hard to beat. 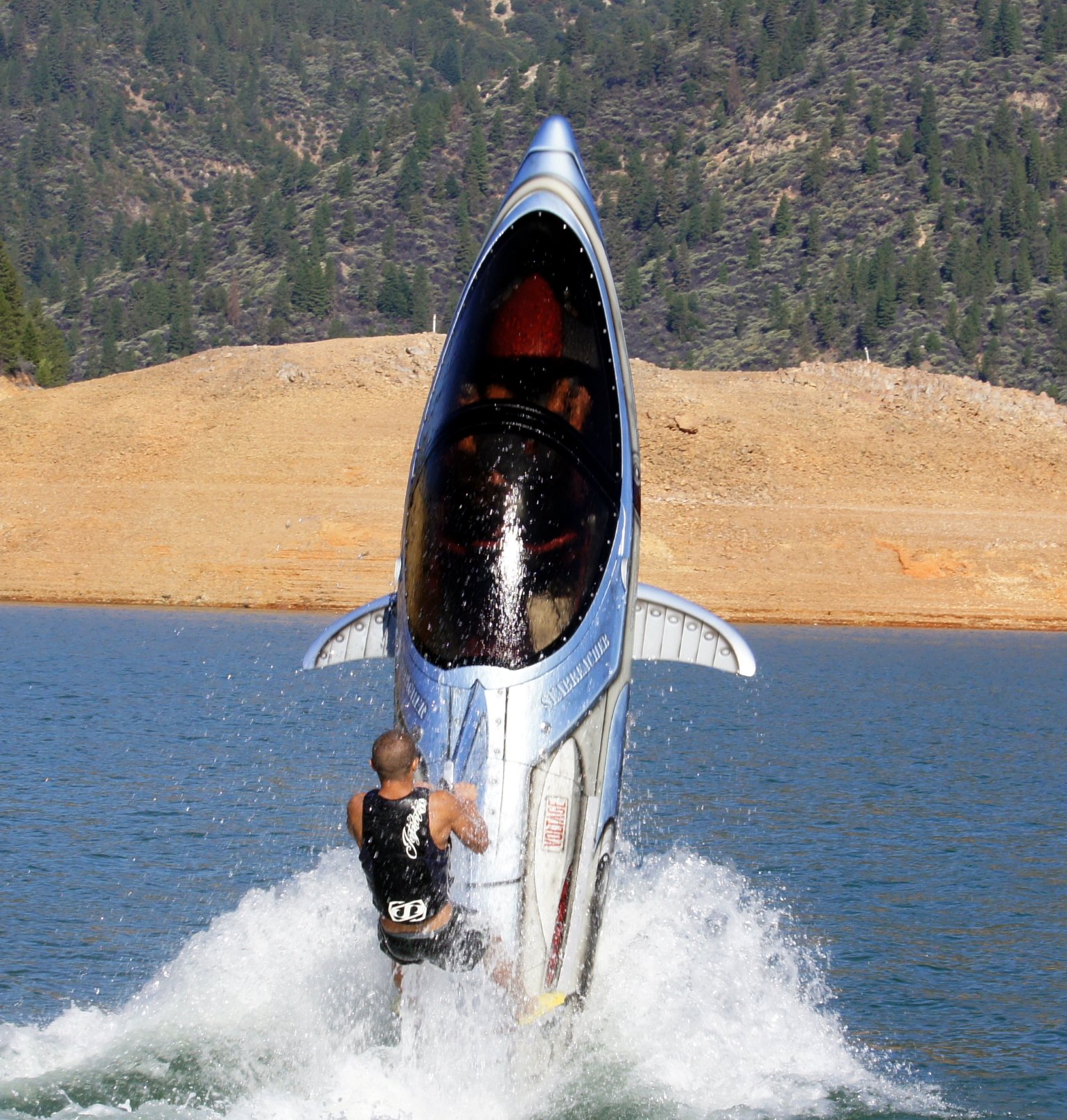 (All pictures and video courtesy seabreacher.com)