A rifle-scope needs to coordinate and blend in with the rifle it is mounted on, both functionally and aesthetically. So, especially for a rifle-scope that is going to be mounted on a heavy calibre big game rifle such as the new Rigby which is chambered for the 450 Rigby, 416 Rigby and the venerable 375 Holland and Holland Magnum, then a ruggedly beautiful steel rifle-scope such as the new steel version of the Helia 5 1.6-8x42i from Kahles of Austria is going to be something you will want to seriously evaluate. The new Rigby rifles for example are all steel, so an all steel rifle-scope will compliment them beautifully. 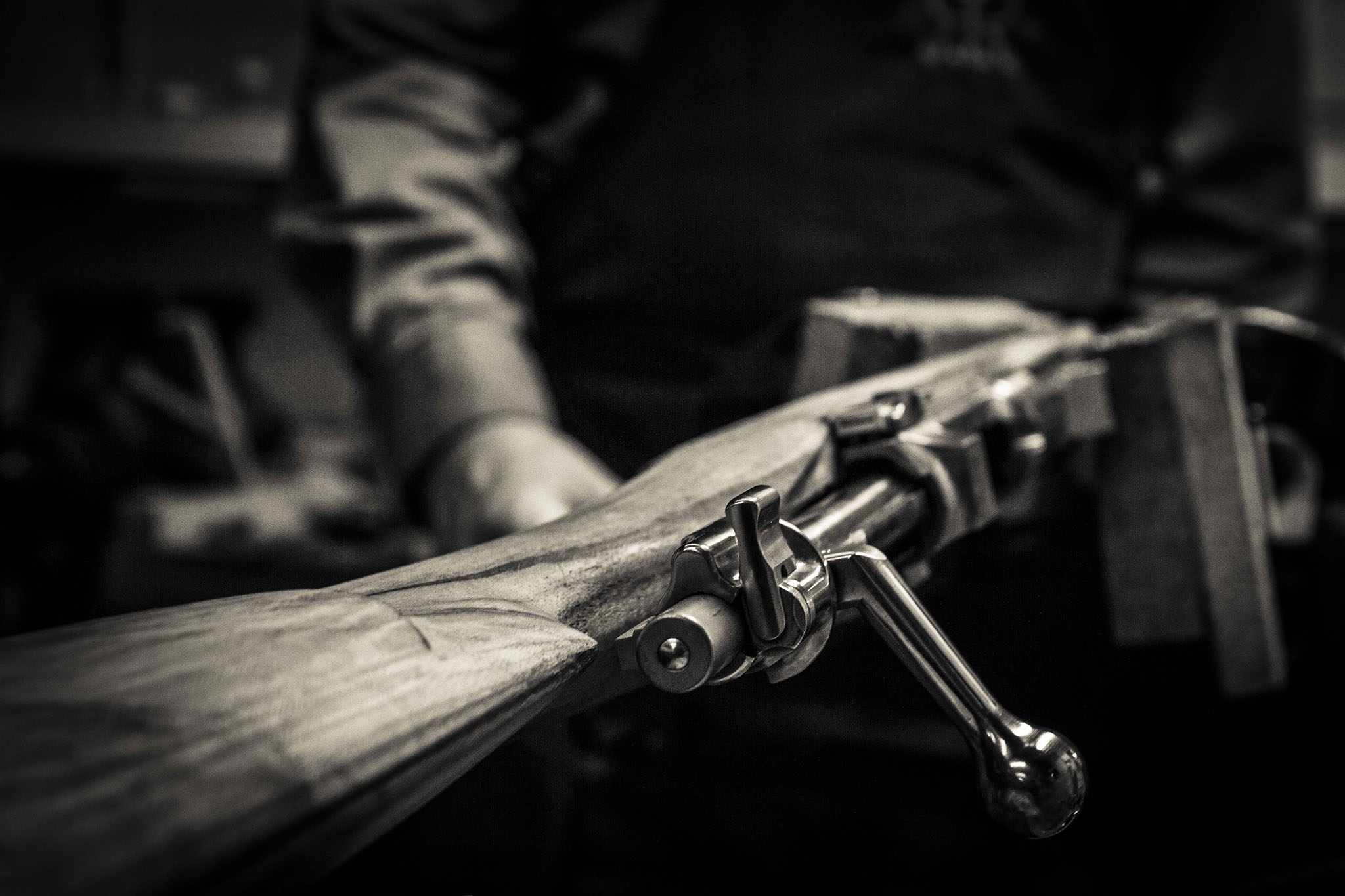 If your custom rifle is to be a graceful blending of steel and select walnut then a steel rifle-scope will compliment it beautifully. (Picture courtesy of Rigby).

Kahles of Austria have, wisely I think, chosen to offer their new Helia 5 1.6-8x42i rifle-scope in both the usual aluminium alloy and also in polished, scratch proof, tempered steel. It is the only model in the Kahles Helia 5 range that offers the choice of either alloy or steel at present and this seems a sensible starting point, although I think it would be excellent if the Helia 5 1-5 x 24i were also offered in steel as it would be a rifle-scope of choice for a dangerous game rifle. That being said the 1.6-8x42i is an excellent specification for a big game rifle and/or a dangerous game rifle offering both a wide field of view at low magnification and the ability to go all the way up to 8x for longer shots, shots that may require the ability to use that 8x magnification to clearly see and identify one’s quarry in cover and enable one to safely take the shot. 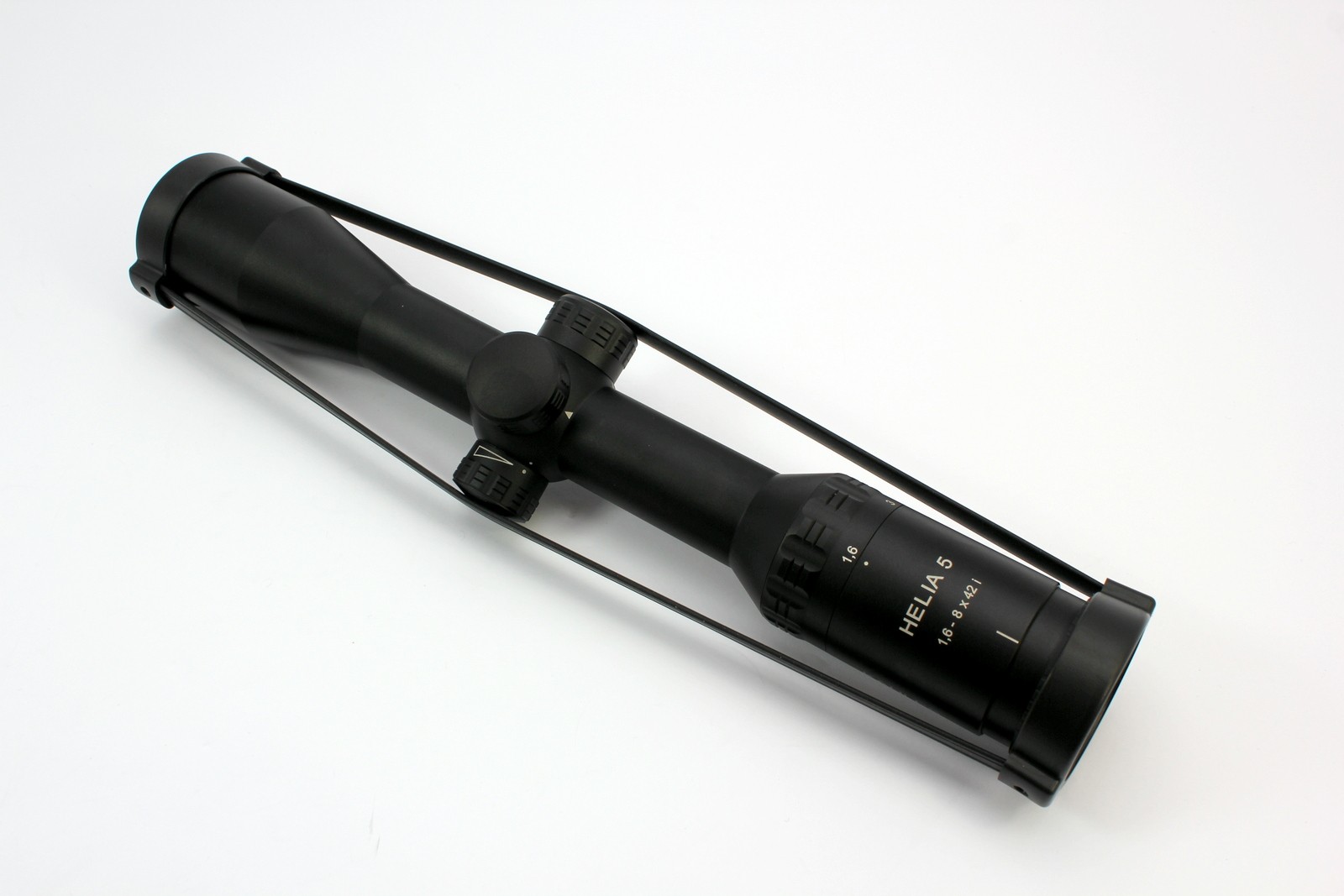 Top view of the Kahles 1.6-8x42i. Adjustment for the illuminated reticle is visible on left side of adjustment turret. (Picture courtesy of optics-info.com)

The Helia 5 1.6-8x42i is a new addition to Kahles Helia 5 series this year. It sits directly between the existing two Helia 5 models, the 2.4-12x56i and the 1-5x24i. A magnification range that begins at 1.6x provides a wide field of view of 25.5m at 100m/76.5feet at 100yards. This is good for short range target acquisition and adequate for running game. So the rifle-scope enables snap shooting on a quarry that is close by. The 8x upper magnification is a level that we used to find on rifles set up for long range and mountain hunting, Kahles own superseded 8x56mm being an example. I had a Kahles 8x56mm on my old Mannlicher-Schönauer 6.5x68mm many years ago. 8x is sufficient magnification to zero a rifle at 300 yards and to shoot out to 400 yards providing the shooter and the cartridge are up to that task. So, although there is no shortage of rifle-scopes that offer magnification above 8x, nonetheless 8x is sufficient for the longest range shots one might ethically take on game. Thus the 1.6x-8x magnification range of the Helia 5 1.6-8x42i offers enormous flexibility.

The 42mm objective lens is a decent compromise on a rifle scope of this class. It will be able to be used in really poor light up to about 6x, and in low light conditions all the way up to 8x if needed. The old method of assessing a rifle-scope’s low light capability was calculated on the notion that a human eye can accommodate an exit pupil from the scope of 7mm. Thus, to calculate the maximum magnification that will be able to be used under really adverse light conditions we divide the diameter of the objective lens by 7mm. Hence the old standard fixed power European rifle-scopes were 6x42mm and 8x56mm. Historically the 6x42mm rifle-scope was pretty much a European standard for decades. 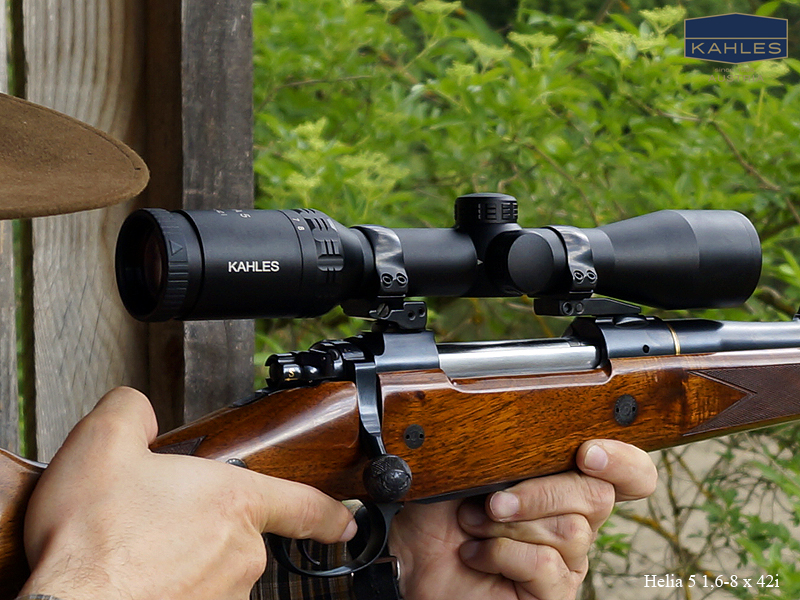 The Kahles Helia 5 1.6-8x42i is quite compact. The 42mm objective lens enables the rifle-scope to be mounted as low as is practicable. (Picture courtesy of Kahles).

In addition to rugged and reliable construction the Kahles Helia 5 series rifle-scopes feature an illuminated reticle with variable brightness and an automatic off/on feature to save battery life. The automatic off/on feature senses if the rifle is upright, as it needs to be when taking a shot, or laid over at an angle as it will be if no shot is to be taken. If the rifle is brought to an upright shooting position the reticle illumination will come on, and if it is not near upright it will automatically switch off. The shooter can of course choose whether or not to activate the illuminated reticle and can adjust the brightness to suit the hunting situation by means of the knob on the left side of the adjustment turret. The automatic off/on feature also responds to the vertical angle of the rifle-scope so, if the rifle is for example slung over the shoulder and his pointing upwards at the sky or downwards at the ground the illuminated reticle will switch off, and back on when the rifle-scope is brought back to a shooting position. The video below gives an idea of this.


There are two illuminated reticles available for the Helia 5 series rifle-scopes; the 4-Dot and the G4B. The reticles of the Helia 5 series rifle-scopes are located in the second focal plane as is the norm on rifle-scopes made and preferred in the United States. This means that the reticles are “non-magnifying” but this also means that the reticle subtensions change as the rifle-scope is zoomed up or down through its magnification range. Hence the pictures below specify different reticle subtensions at 1.5x and at 8x. 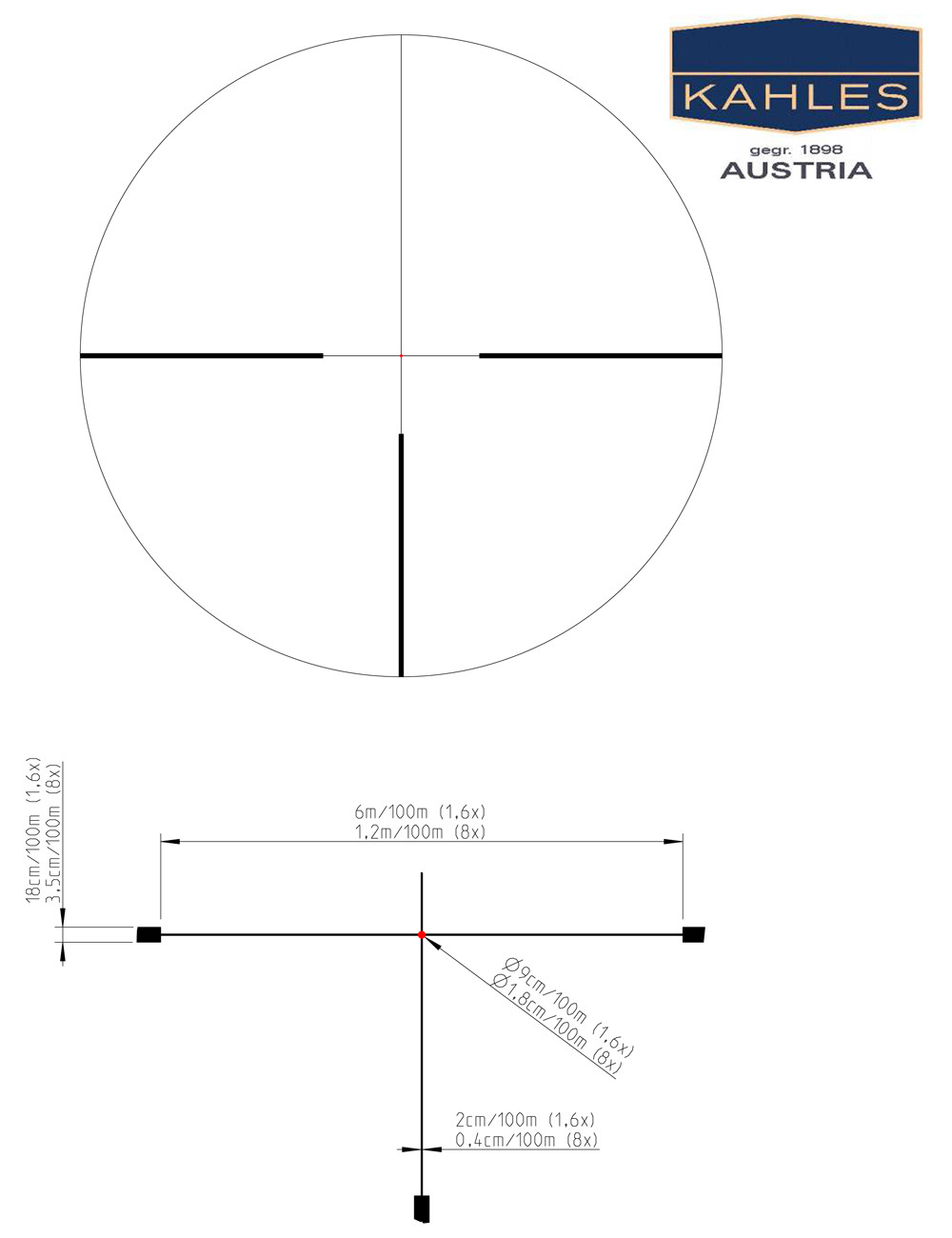 The 4-Dot reticle with subtensions for the 1.6-8x42i. The Helia 5 rifle-scopes feature reticles located in the second focal plane as typically preferred in the United States. This means that the reticle is “non-magnifying” but it also means that the size of the reticle subtensions change as the magnification is changed. (Picture courtesy of Kahles).

The 4-Dot reticle is a clean, simple old fashioned design that has been proven by years of use in the field. 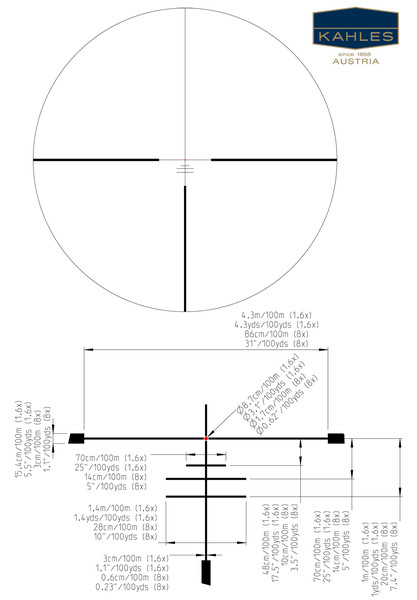 The G4B reticle is a similar design to the 4-Dot but halves the distance between the heavy bars, and includes three additional lines for range finding and aiming off guidance. (Picture courtesy of Kahles).

The G4B reticle halves the distance between the heavy bars and adds three lines as additional helps for range estimation and to provide guidance for aiming off as needed to compensate for range and/or windage.

You will find the full specifications of the three models in the Kahles Helia 5 series at the Kahles web site if you click here.

Kahles short video summarising the specifications and features of the Helia 5 1.6-8x42i is below.

The new “Ballistic Drop Compensation” device
This year Kahles have added a new optional feature to the Helia 5 series of rifle-scopes; their own “Ballistic Drop Compensation” device. This essentially works by the addition of a modified elevation turret (which can be retro-fitted to any Helia 5 series rifle-scope) that takes a customised ballistic ring for the factory ammunition being used. 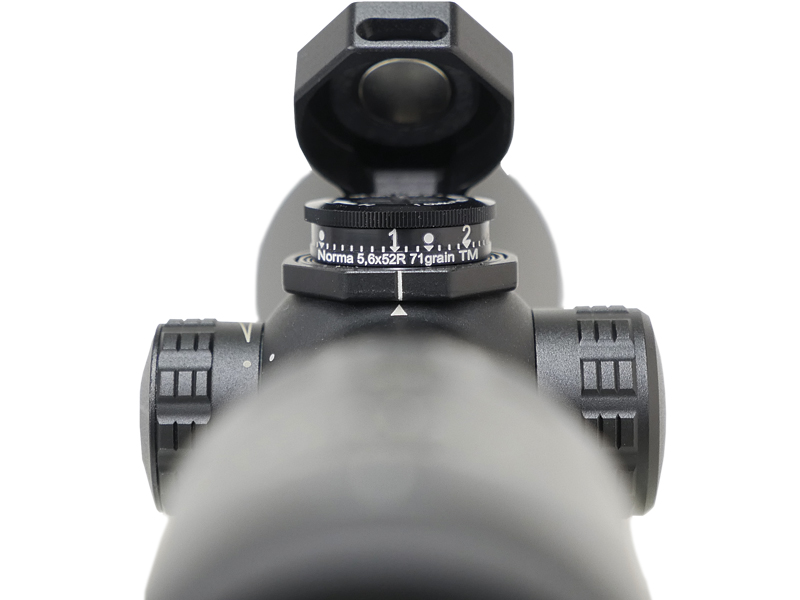 Once set up the idea is that the shooter needs only to estimate the range to his or her quarry and then dial the range into the ballistic compensator ring, which will adjust the elevation so the shooter can then simply put the cross hairs at the point of aim, without needing to hold off for elevation. For hand-loaders customisable rings are available for the shooter or their gunsmith to create suitable rings for their hand-loaded ammunition. 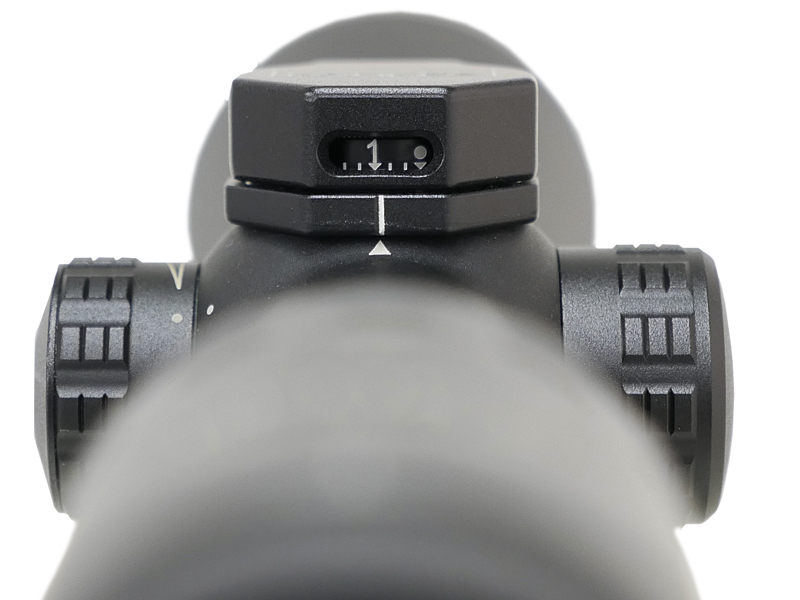 The Ballistic Drop Compensator allows the range to be seen at a glance even if it is closed. (Picture courtesy of Kahles).

This is a system that will appeal to some. Some people prefer to have a means to adjust their sights for longer shots. Personally though I would not choose to install this device onto a rifle-scope that I will be using for a couple of  reasons.

To sum up, the Kahles Helia 5 series are well worth looking at and evaluating if you are looking for a rifle-scope for your hunting rifle. The availability of the Helia 5 1.6-8x42i in both steel and aluminium versions is an exciting development and I hope it proves to be a great success for Kahles. They are creating rifle-scopes that will suit both top shelf rifles, and also rifles that are intended to be used in rugged and challenging conditions.

Whether you choose a steel Kahles Helia 5 1.6-8x42i or an aluminium alloy one you are certain to be buying a rifle-scope that has been designed and constructed to be predictable and reliable, you will have purchased a top quality item. They are also aesthetically pleasing and will look fabulous on whatever rifle the owner chooses to mount them on.

The aluminium alloy Kahles Helia 5 1.6-8x42i is available from OpticsPlanet if you click here. (Note: USA customers only) 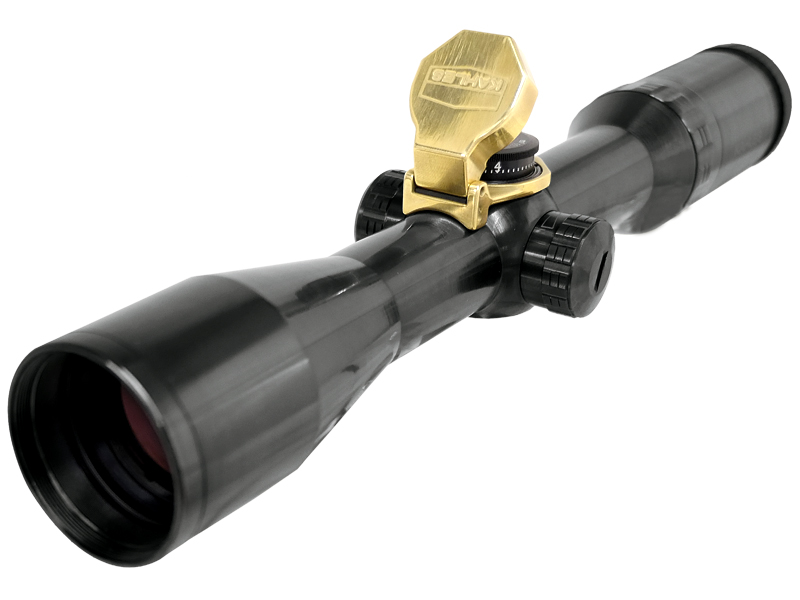 A Kahles Helia 5 1.6-8x42i steel model with the new Ballistic Drop Compensator fitted. Personally I think the rifle-scope is a lot prettier without it, but I’m really old fashioned. (Picture courtesy of Kahles).