If you get into rifle shooting for accuracy, be it for target matches such as the Australian Field Rifle or Three Positional Scoped Rifle matches, or for Benchrest competition, you are going to want to put a significant effort into preparing your cartridge cases. This will include batching cases by weight, fire forming, neck sizing, trimming, and neck reaming and/or turning. Benchrest rifle competition is something any shooter who is really determined to learn about rifle accuracy should spend some time doing. There is a lot more to rifle accuracy than just tuning for the best powder and bullet combination. If we are thinking about hunting or vermin control shooting the need for such tight accuracy is less at typical hunting ranges up to two hundred yards on medium game animals. But if we are going to be in a hunting situation where the shot may have to be taken at ranges over three hundred yards, or if we are “varmint” shooting, then getting your rifle’s consistent grouping below one minute of angle is going to become important. Bear in mind that in Benchrest competition we need to get our rifle’s consistent grouping down to below a half minute of angle to be in any way competitive.

One of my main tools for cartridge case preparation has been the L.E. Wilson case trimmer, neck reamer, primer pocket tool. My practical experience with this tool has been with four calibers, the .22 Kilbourne Hornet, .220 Russian, .308 Winchester, and the 6.5×68 Schuler. The Wilson tool holds the cartridge case by the body as opposed to most other case trimmers which hold the case by the case head. This means the case is held in the trimmer in a more strongly supported and centralized way and that means it will trim more accurately and consistently. A case holder is needed for each caliber to be trimmed. For standard calibers Wilson offers a good listing of available off the shelf case holders and for unusual calibers, such as the 6.5×68 Schuler they will make a custom shell holder if you send them a fire-formed case (or a full length resized case depending on your needs). 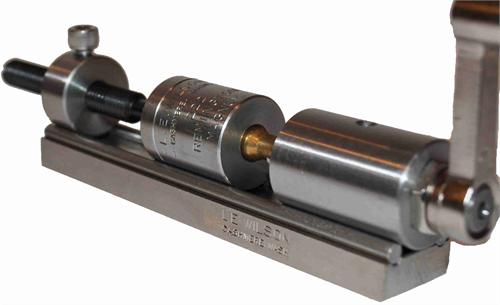 The Wilson Case Trimmer; here you can see the cartridge case held by the body fully centered and supported.

Neck reaming is something you may or may not need to do depending on the rifle caliber you are loading for. Some prefer neck turning. However some calibers may require neck reaming because of the design of the cartridge case. The 6.5×68 Schuler is an example. This cartridge case features a gently sloping 14.4 degree shoulder in a caliber that is operating with large loads of slow burning powder. In my experience, especially with RWS cases, this leads to some brass flow and consequent thickening at the junction of the case shoulder and neck. If you are loading light bullets such as the 93 grain RWS this may not be noticed, but if you load a heavier bullet, such as the 140 grain Sierra Spitzer Boat Tail which needs to be seated down into the powder space then failure to ream the neck can cause the loaded cartridge to be tight in the chamber which can then create potentially dangerous pressures. Gently sloping shoulders of this type are found on cartridges such as the German 6.5x68S and the 7×66 Vom Hofe. During this period of German sporting cartridge development, i.e. during the 1930’s, we see efforts to use a gently sloping shoulder in an effort to optimize the gas flow. The 7×66 Vom Hofe even incorporates a venturified shape to this effect. So, if you are loading a cartridge of this type then you need to ensure you monitor for thickening at the junction of the shoulder and neck and neck ream as needed.

Drawing of the 6.5×68 Schuler showing the gently sloping 14.4 degree shoulder and the relatively short neck.

The Wilson case tool is easy to use for bottleneck cartridge cases, however, if you are loading for a straight walled pistol or rifle cartridge then there is an extra step required. For bottleneck cases the case is simply tapped into the shell holder using a hard wood block, one tap does nicely. However, straight walled cases must be pressed into the shell holder using an arbor press or similar and after trimming pressed back out again. This sounds harder than it actually is. Benchrest shooters typically use an arbor press and re-load their way through a competition using a set of carefully batched and prepared cases. A typical competition may require over eighty reloads. So, if you are for example shooting a precision pistol competition such as the ISSF Center-fire match then in your search for accuracy you may well want to invest this sort of effort into your case preparation. There’s not much point in investing in the most accurate pistol you can find without similarly investing in using Benchrest rifle methods to produce cartridges that will produce all the accuracy your expensive target pistol can manage.

For me, the challenge of reloading is just as much fun as the actual shooting of the reloaded cartridges. I enjoy the process of creating cases that are as near perfect as I can make them, and loading them so that the rifle or pistol I’m using them in produces jaw dropping levels of accuracy. If you are like that then the L.E. Wilson case tool may well be something you will want to invest in. And for the accuracy aficionados out there they have a new model with a built in micrometer. I wish they had that when I bought mine.

The new model Wilson case trimmer with built in micrometer.