Wisdom with the benefit of hindsight is said to be the worst kind of wisdom to have; but in truth it is really important to fail sometimes and hopefully to have the opportunity to evaluate what went wrong and start all over again. Thus it was that the Austin-Healey would probably not have been an Austin-Healey but for the failure of Austin’s visionary car for the post war era, the Austin A90 Atlantic with its sveldt Italian inspired bodywork and 16hp engine. By the time the Head of Austin, Leonard Lord, arrived at the 1952 London Motor Show at Earl’s Court he already knew that his vision for Austin’s bright new future exporting trendy cars to the United States was a failure. But it was at the 1952 London Motor show that Leonard Lord saw the car that he should have created, the Healey 100, the car that would appeal to American buyers. Leonard Lord and Donald Healey, the creator of the Healey 100 would have dinner together and sign a contract that would create the Austin-Healey and give the world the Austin-Healey 100, backed up by Austin’s manufacturing capacity and dealer network. 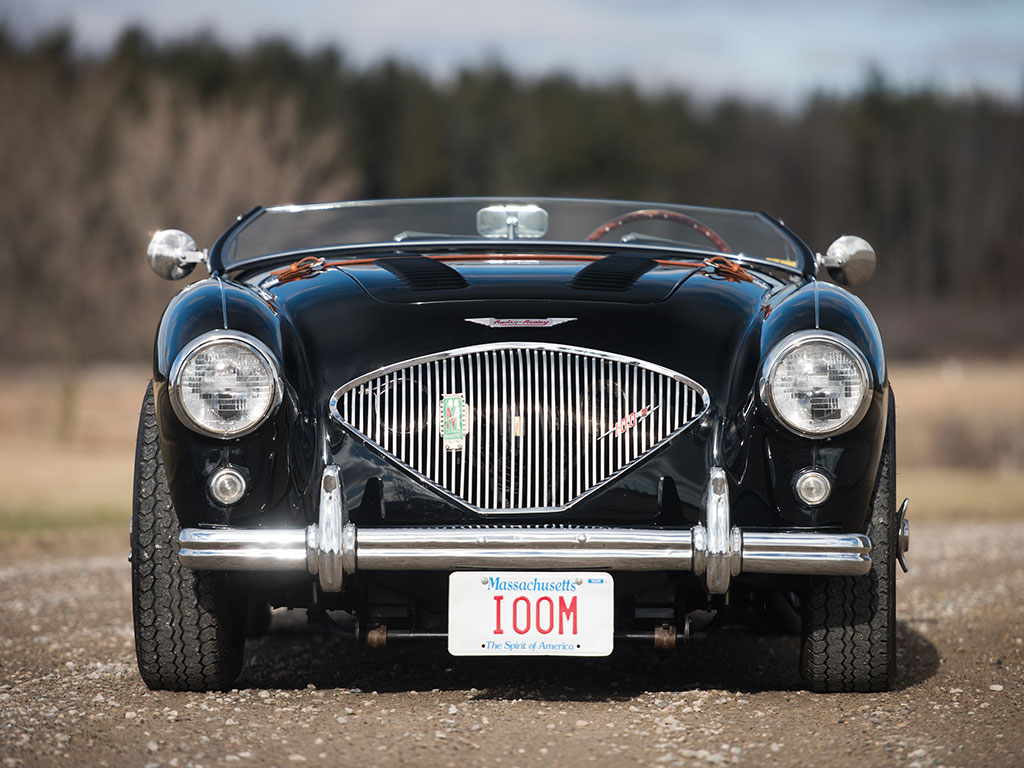 The Austin-Healey is every bit the car that the Austin A90 Atlantic wasn’t. (Picture courtesy RM Sotherby’s).

The Austin-Healey 100 was a car that movie stars would own. It was and is one of the most exciting and enjoyable cars one could ever have the opportunity to drive even in its original iteration with a four cylinder Austin engine mated to a three speed Austin gearbox even if it did have an electric overdrive. This was a car that would directly compete with the Jaguar XK120 and Porsche 356 and with anything the Americans could throw at it also. The Austin A90 Atlantic could never have competed at the Le Mans 24 hour, the Austin-Healey 100 did in 1953 its second year of production, competing both at the 1953 Mille Miglia and then at Le Mans the same year. The special version of the Austin-Healey 100 that raced in 1953 was the parent to the Austin-Healey 100M, and to the 100S which was created for the Sebring motor race and also Le Mans where, in 1953, a 100S was involved in the worst accident in motor racing history when the Austin-Healey 100S driven by Lance Macklin was hit in the rear by the Mercedes 300SLR of Pierre Levegh. 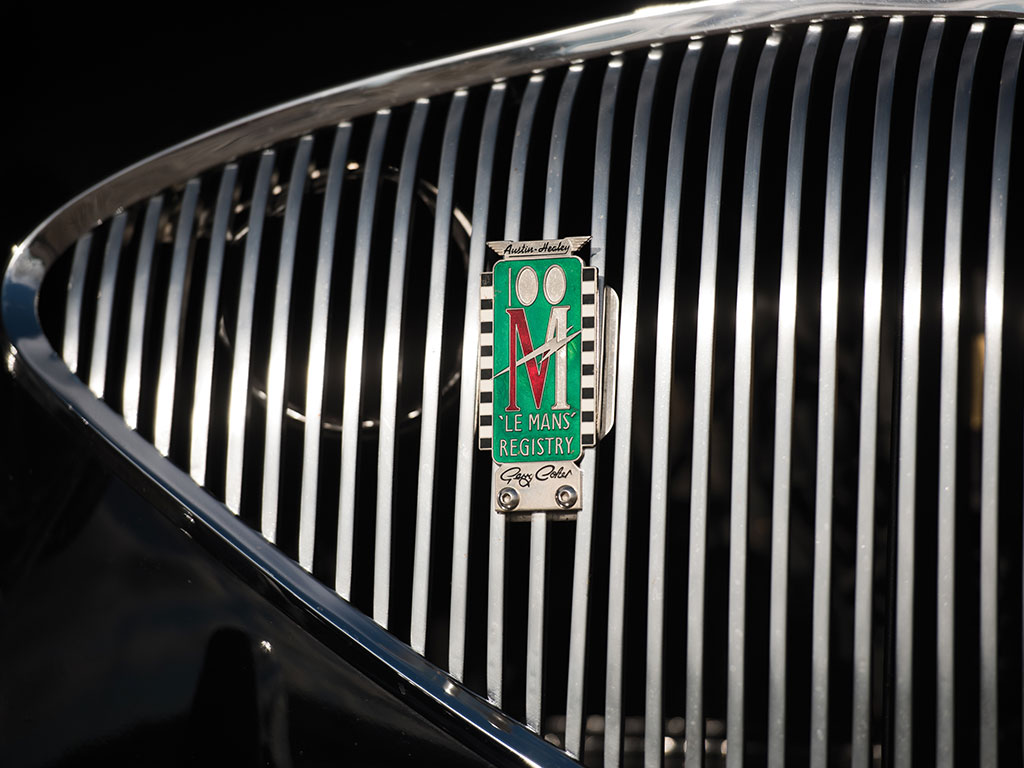 The heritage of this 100M is attested by membership of the Le Mans registry. (Picture courtesy RM Sotherby’s).

The Austin-Healey 100M retained the same 2,660cc four cylinder Austin engine as the original Healey 100 but the engine was modified by fitting of high compression pistons, larger SU carburettors with a free flow intake manifold and cold air box, a high lift camshaft and a distributor suited to sustained running at high rpm. 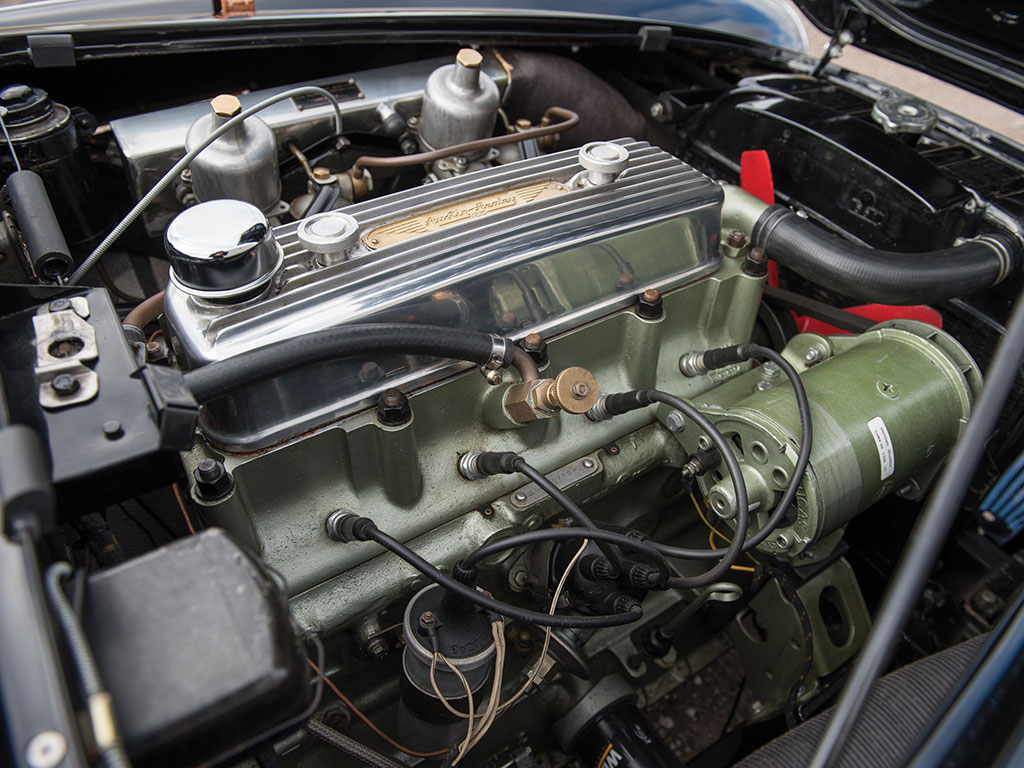 The 100M also had some suspension modifications having larger and stiffer anti roll bars front and rear, and the bonnet/hood held down by a primitive but effective leather strap in case the hood latch came loose at the end of Mulsanne Straight. The hood itself featuring twin louvred vents to help keep the air circulating over that hotted up Austin engine. This was a car built so one could drive it to the race track and go racing. 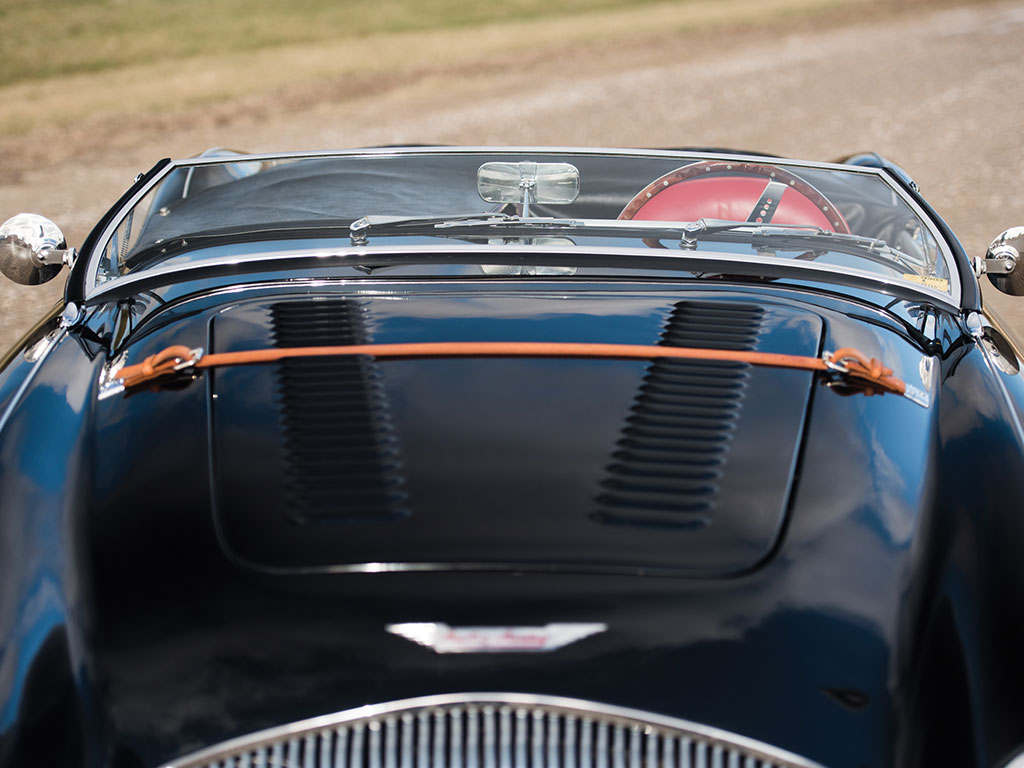 The 100M comes with purposeful air vents on the hood and a leather strap to keep the hood down in case the hood latch comes loose. (Picture courtesy RM Sotherby’s).

Actual factory production of the 100M did not begin until 1955 and only 640 Austin-Healey 100M were produced by the factory making them a sought after example of the early Austin-Healey 100. However, the year before factory production of the 100M began Healey began selling conversion kits for £105 to convert a standard 100 to 100M specification. So the only way to really know if a car is a genuine 100M or not is to know if it’s engine and chassis numbers match those of the factory made cars. The factory made cars feature the two tone paintwork and our featured car is in its original colour scheme of black over Reno Red with a matching red leather interior. 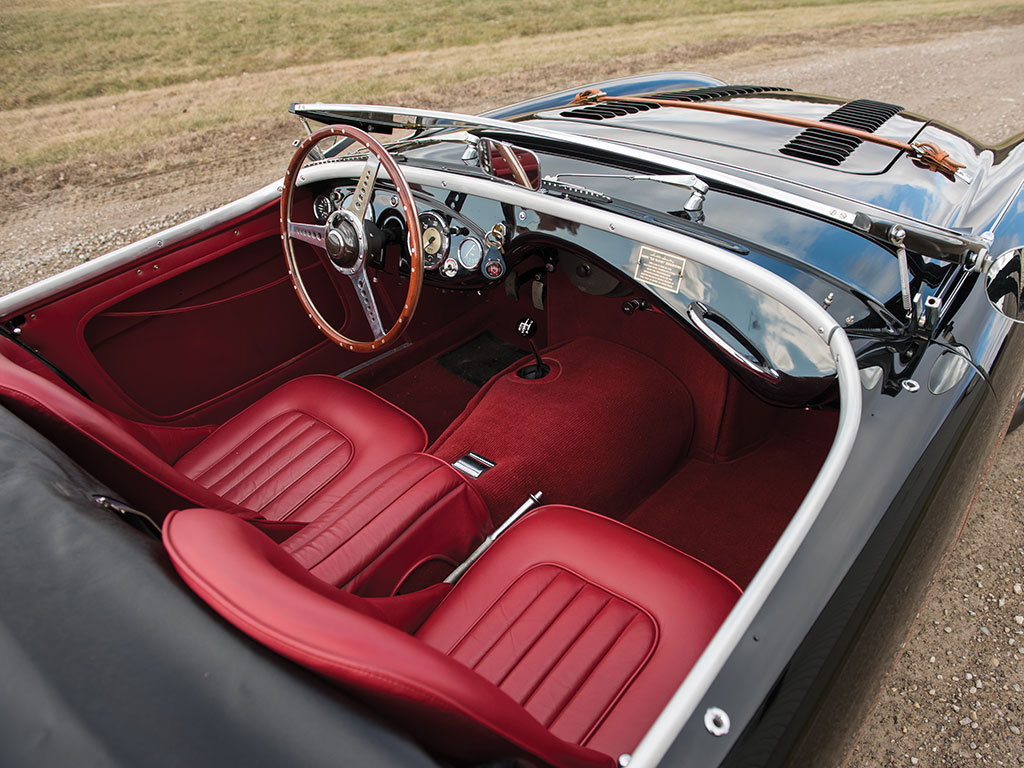 The car has a plate on the dashboard confirming it is accepted into the 100M registry as one of the original 640 factory made 100M. 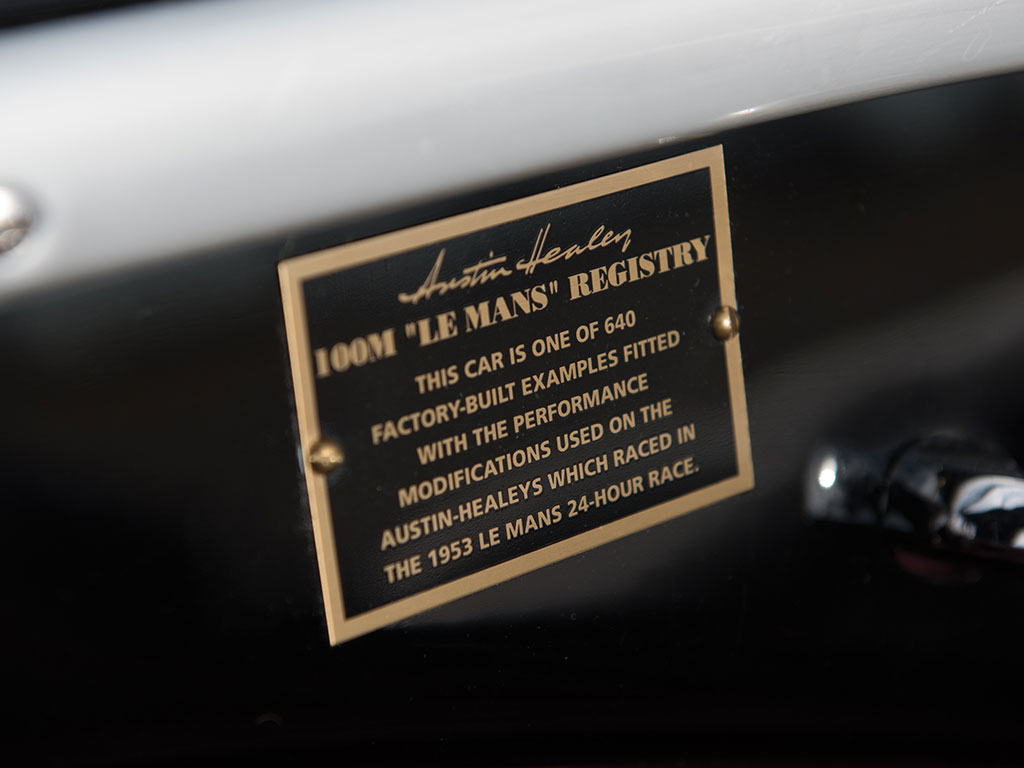 On the dashboard is a plate certifying this car is accepted into the 100M registry as a genuine factory made 100M car. (Picture courtesy RM Sotherby’s).

This car is coming up for auction by RM Sotherby’s at their Amelia Island auction to be held on 12th March 2016.

You will find the RM Sotherby’s auction page with more information about this car if you click here. 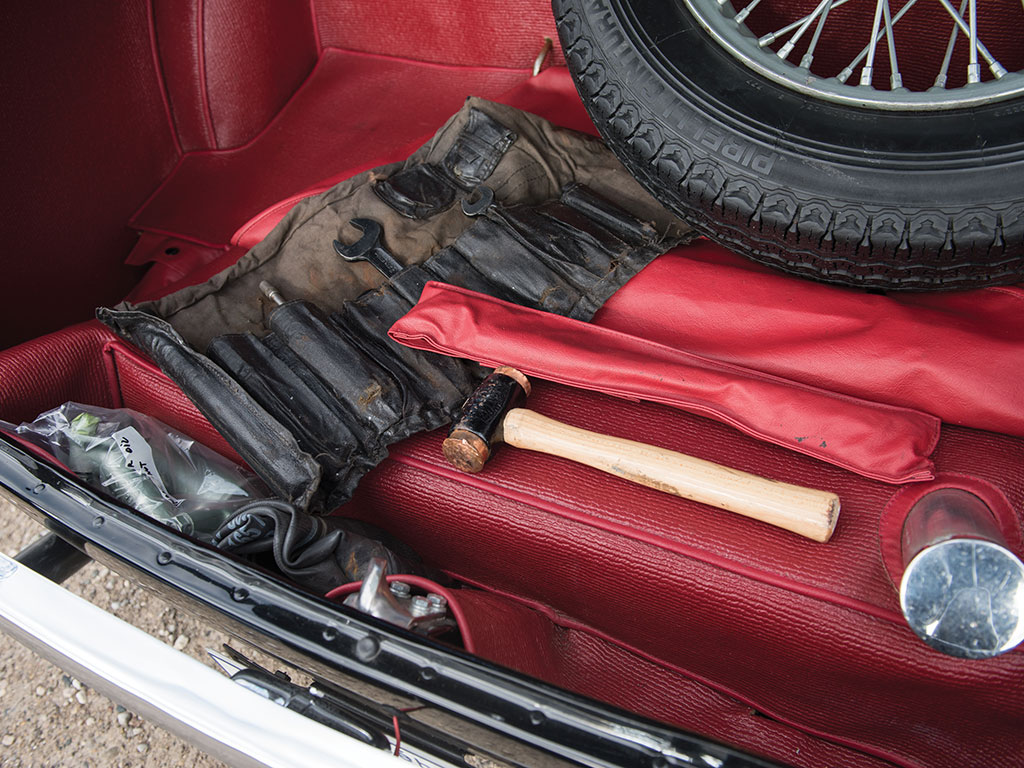 And for those who can’t own this particular car you can still own Bill Piggot’s definitive book on the Austin-Healey “Austin-Healey: A celebration of the fabulous ‘Big’ Healey.” if you click here. 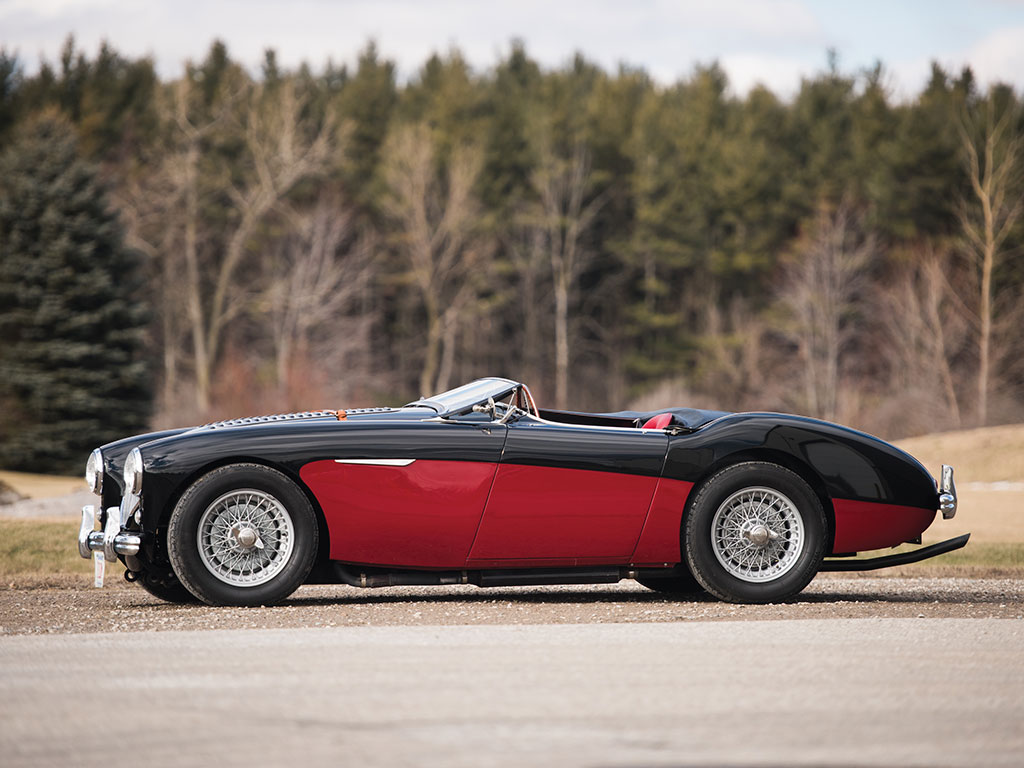