The Series 1 Jaguar XKE (or E Type as it was called in Britain) is the preferred model of them all and the revised Series 1 are the best of those having a number of nice improvements including an alternator instead of a generator and synchromesh on all four gears instead of the Moss gearbox of the first Series 1’s which did not have synchromesh on first gear. The improved Series 1 also gained the 4.2 liter Jaguar in-line six cylinder engine instead of the 3.8 liter that had carried over from the XKE’s predecessor the Jaguar XK150 3.8 S. 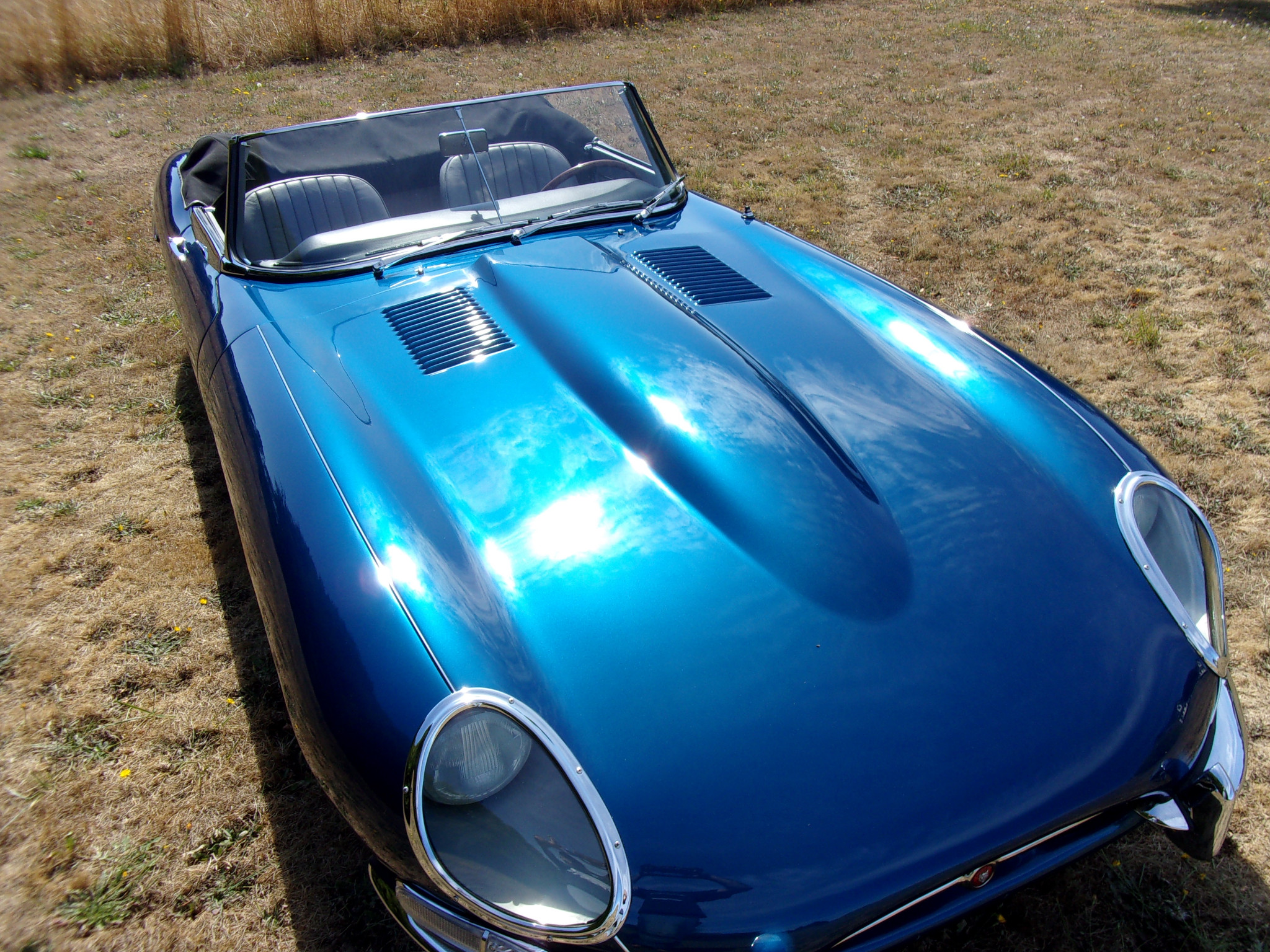 The Series 1 XKE are the cars that are most faithful to the original Sir William Lyons design.

The Series 1 Jaguar XKE are faithful to Sir William Lyons’ design and have the graceful lines that caused Enzo Ferrari to call it “The most beautiful car ever made”. These cars were spared the re-design treatments made necessary by the US government’s creation of regulations that, for example, prohibited the glass covers over the headlights. So our 1966 feature car indeed has those glass covers as it pre-dates the regulations that banned them. 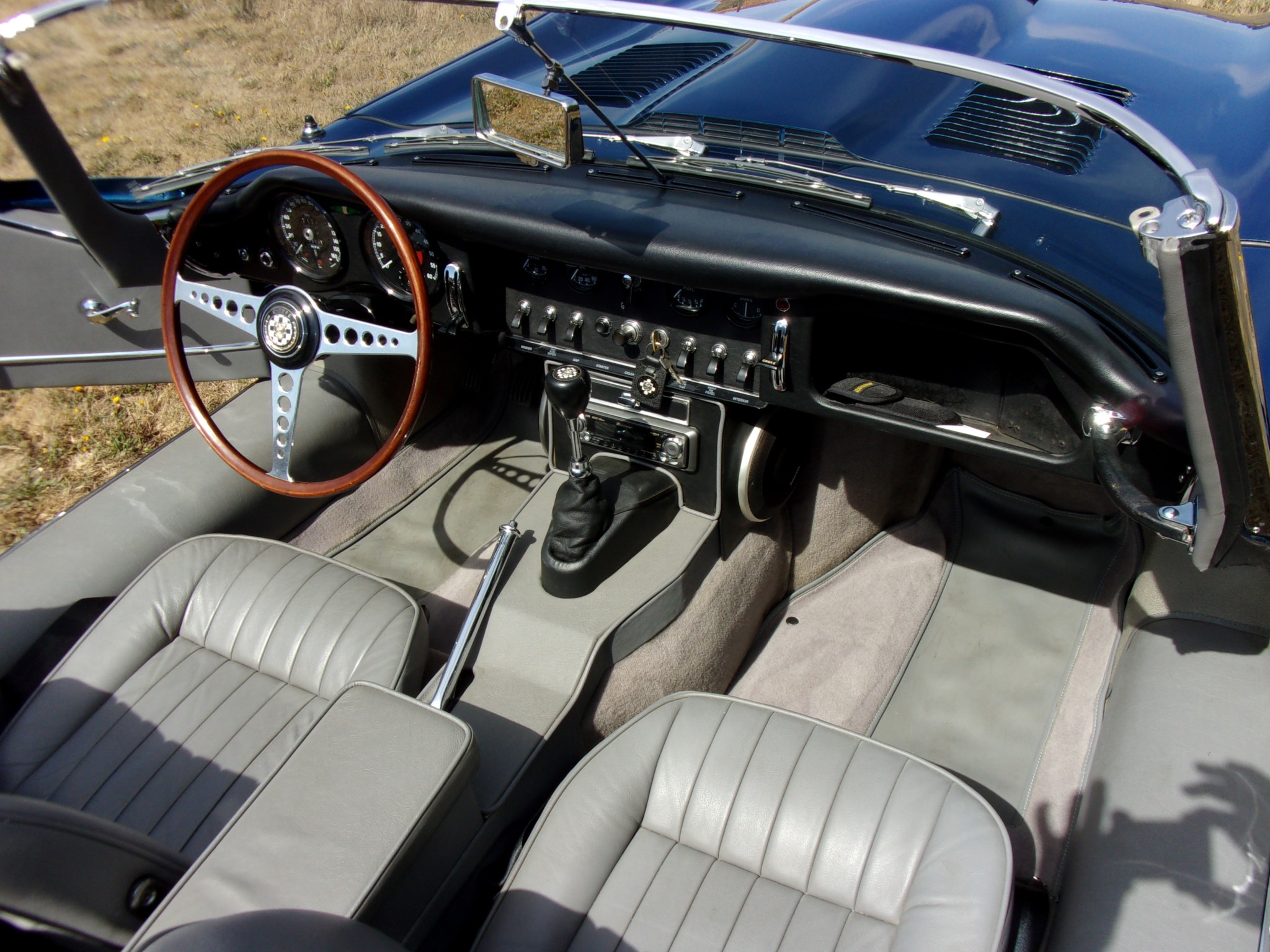 It doesn’t get more classic Jaguar XKE than this.

The Series 1 Jaguar XKE has the fully independent front and rear suspension that gave the car such legendary handling. The front by wishbones and torsion bars and the rear with coil springs and the disc brakes mounted inboard to reduce unsprung weight and reduce rear end skip to an absolute minimum. 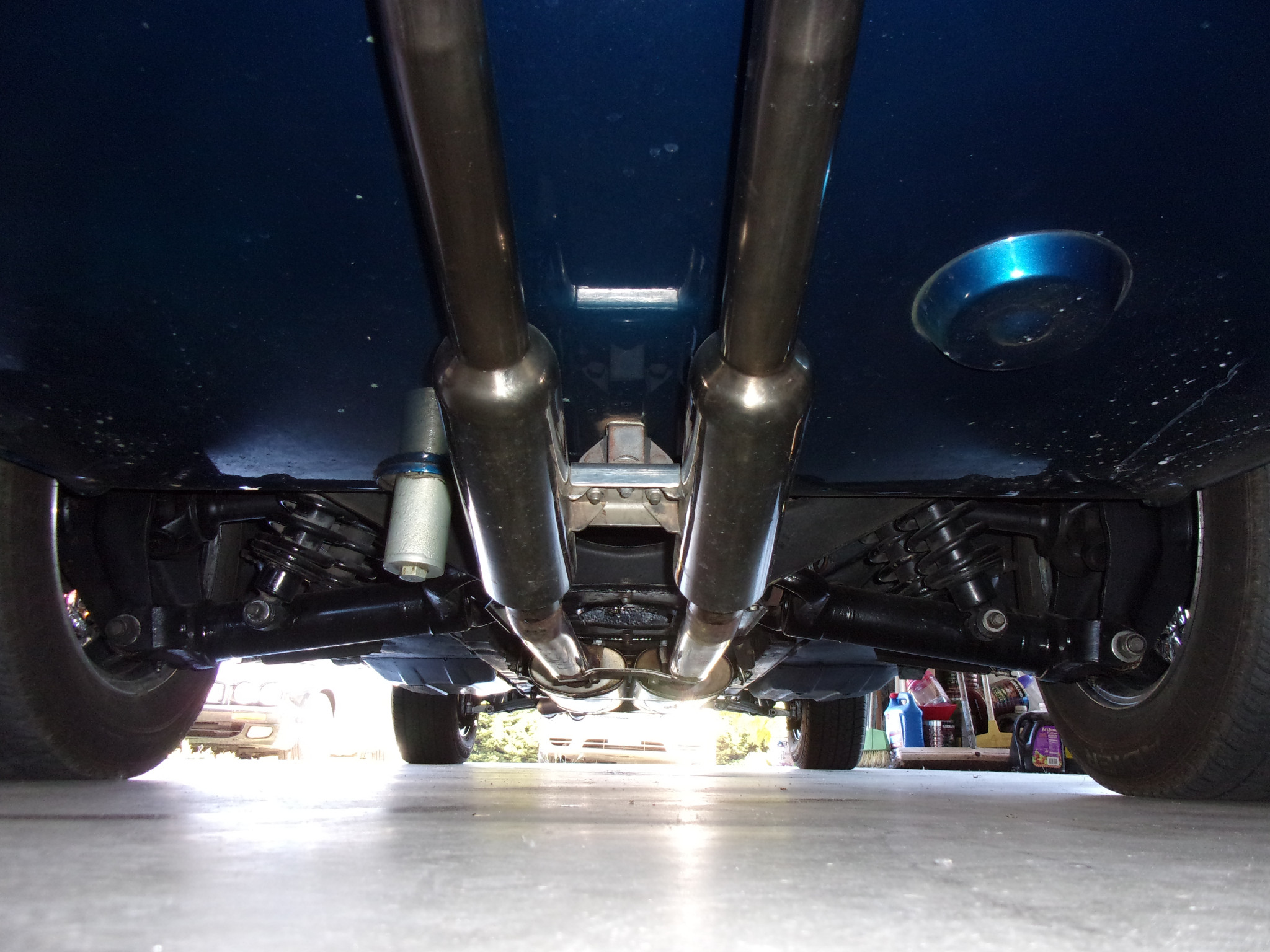 Rear suspension of the feature car is visible in this shot although the inboard disc brakes are hidden as they are mounted alongside the differential.

The 4.2 liter engine of the improved Series 1 cars did not actually increase the top speed of the XKE but it did provide more torque making this a car of which one British motoring writer commented “The absurd ease which 100 mph can be exceeded in a 1⁄4 mile never failed to astonish.” The car’s already impressive performance remained about the same between the two engines. 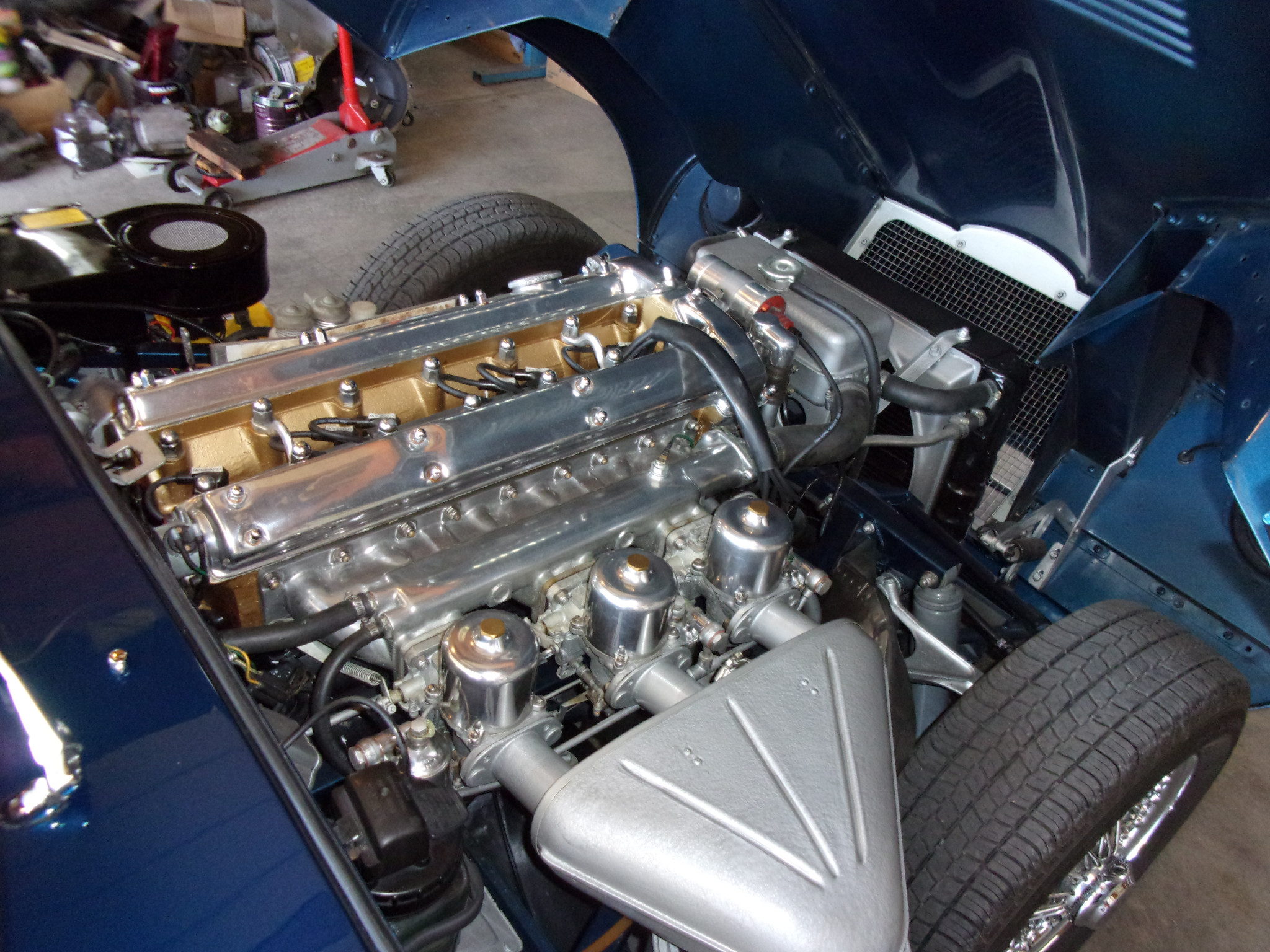 The original Jaguar XKE was claimed to be capable of 150mph and on road test it achieved that claim. However, the test cars in which that was done were specifically factory prepared and their engines had to be made capable of exceeding the 5,500rpm red line of the 3.8 liter engine and the 5000rpm red line of the 4.2 liter engine. To achieve 150mph the engine must reach at least 6000rpm. This can be done if the engine is specifically prepared for it but one should not attempt it in a fifty year old XKE unless the engine has had some custom work done on it. To illustrate this warning let’s consider that down in Australia there is a race circuit called Mount Panorama and the main straight is aptly named “Conrod Straight”. It is called that because as the cars reach their top speed on Conrod Straight the engines are normally red-lining and sometimes blow up leaving bits of engine – including con-rods – on the bitumen. 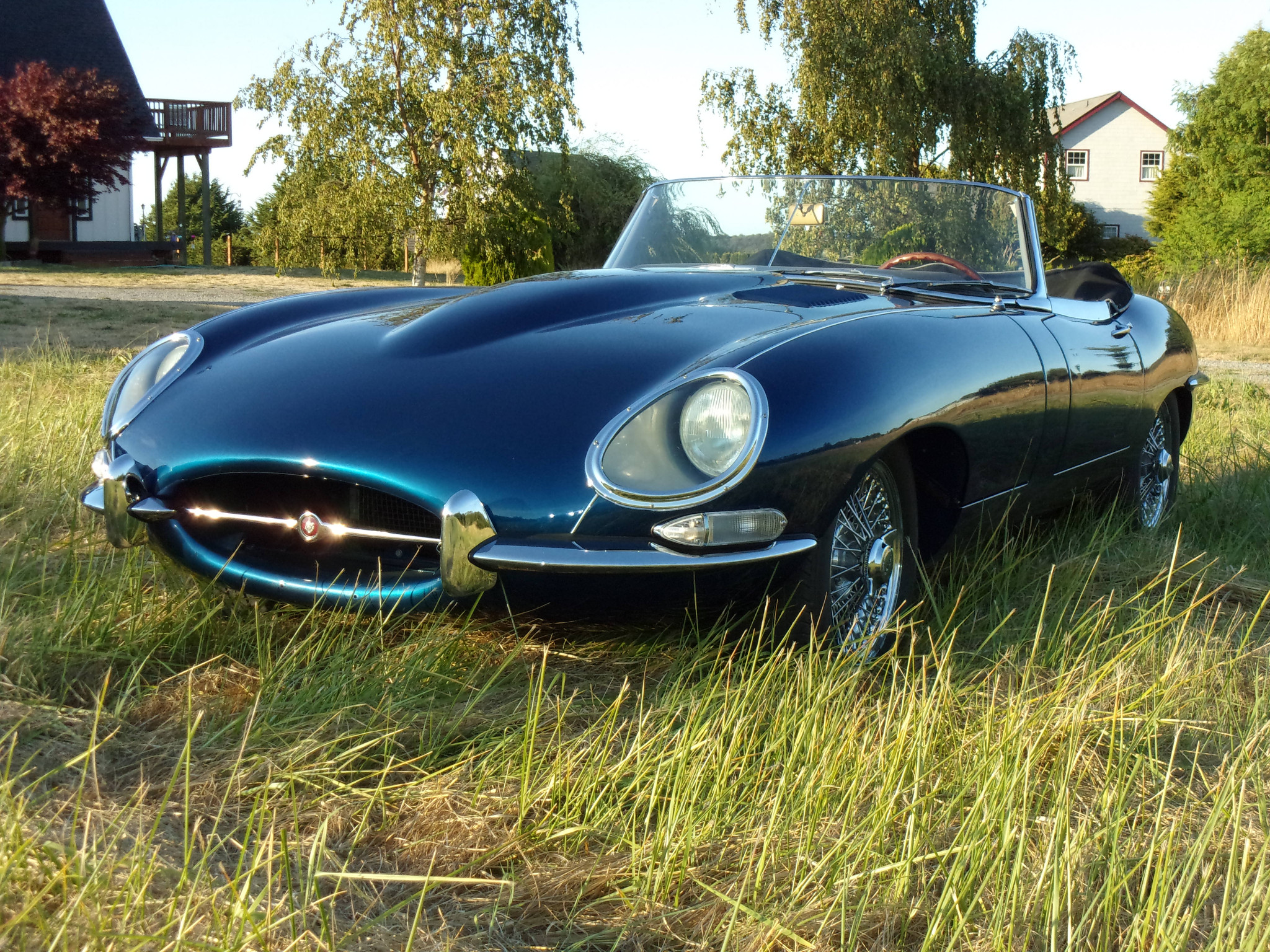 Is it any wonder Enzo Ferrari called the Jaguar XKE “The most beautiful car ever made”.

The deep Sapphire Blue 1966 Jaguar XKE Series 1 we are featuring is currently up for auction on Bring A Trailer. The car has been well maintained and has had one restoration done many years ago and another partial restoration done recently, restoration work that has included replacement of some body parts including the door skins. There are 59 good quality photos on the auction page and a detailed description of the work done.

You will find the Bring A Trailer auction page for this car if you click here.

At time of publication there were seven days left on the auction and the current bid was USD$91,919.

Looking at the description of the car and the extensive photos my guess is it is very likely worth all of that.

So if you are looking for a Jaguar XKE Series 1 in near impeccable condition this may well be a car you will want to have a very close look at. 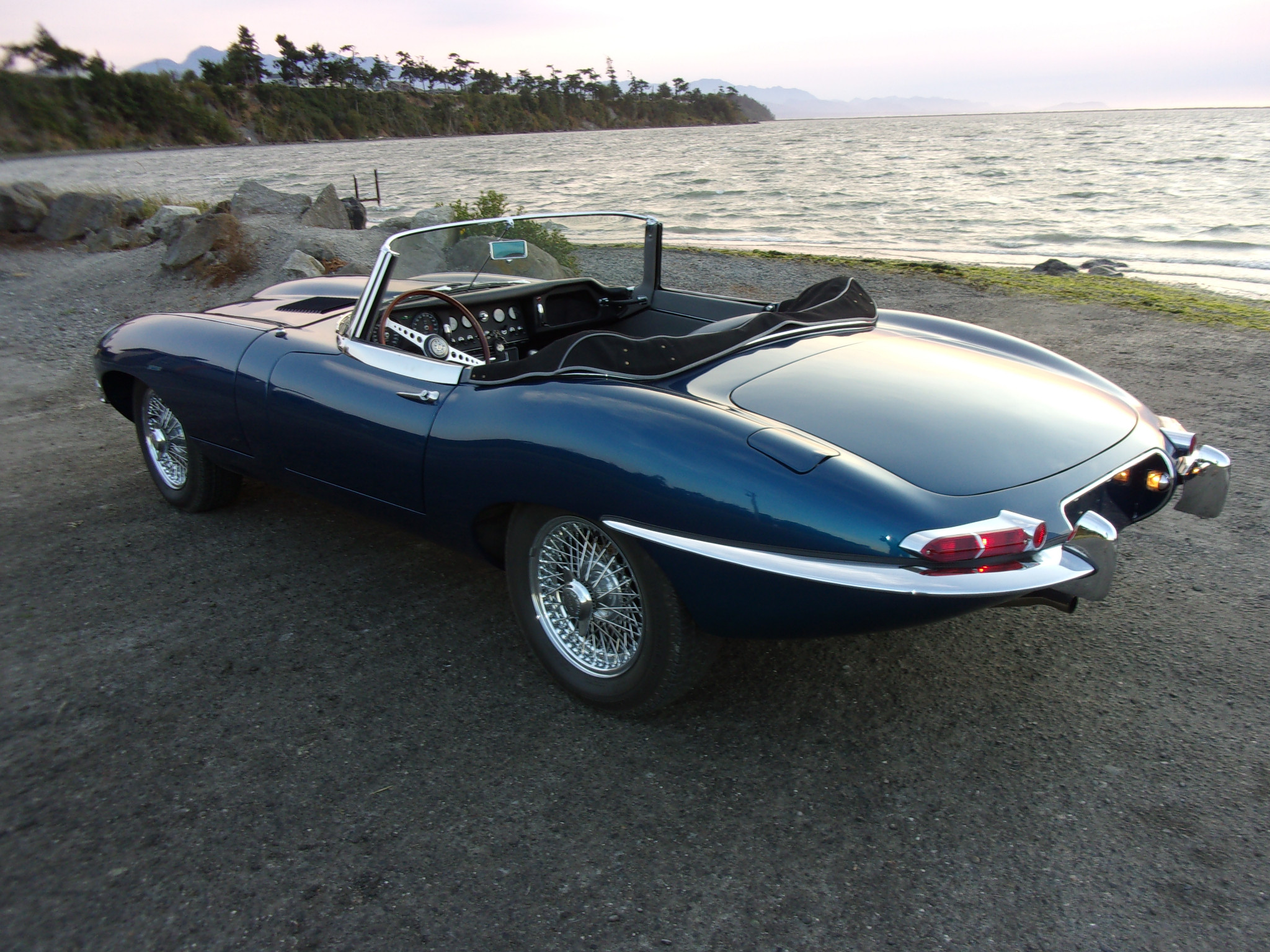 There are some things in life that just can’t be improved on.