Periodically Bonham’s feature an “Antique Arms and Armour” auction and one is coming up in London on Thursday 23rd July 2015. Amongst the more desirable items to be offered in this auction are two Tranter revolvers, a 54 Bore that was originally sold new by Wilkinson and Son in London’s Pall Mall around 1867, and a 120 Bore that was sold new by R.S. Garden of Piccadilly around 1865.

Tranter revolvers were favoured by those who appreciated reliable, well made arms whichever side of the law they happened to be on. Amongst the fictional characters to use a Tranter is Arthur Conan Doyle’s Sherlock Holmes. But the real life users of Tranter’s revolvers and revolving carbines are typically more colourful and more interesting than any fictional character could ever be. For American readers one of the most famous users of a Tranter revolver was Civil War Confederate General J.E.B. Stuart who died at the Battle of Yellow Tavern. Tranter revolvers were quite popular amongst officers of the Confederate Army. Another famous Tranter user was Allan Pinkerton, the founder of the Pinkerton Detective Agency. “Down Under” in Australia Tranter revolvers and revolving carbines are associated with some of the most well known names in Australian folklore including the bushranger (i.e. outlaw) Ben Hall. To give an idea of the esteem in which Tranter’s revolvers and revolving carbines were held at that time there is an incident involving Ben Hall that occurred on 3rd October 1863. Ben Hall and the four members of his gang went to the town of Bathurst in New South Wales and visited the gunshop of Bartolomeo Pedrotta. Pedrotta recognised who his visiting “customers” were and was in fear for his life. Ben Hall’s gang demanded to see his stock of revolvers and revolving carbines. All Bartolomeo Pedrotta had to show them were a new shipment of Colts. The Hall gang refused those saying the Tranters they already had were better.

But even in Australia Tranter revolvers were not solely the pride and joy of the lawless, but also of the police and those on the right side of the law. Just over a year after the Hall gang had visited the Pedrotta gunshop the gang attempted to rob William Macleay the member of parliament for Murrumbidgee. William Macleay was armed with both a Tranter revolver and a Tranter revolving carbine with which he was able to persuade the Hall gang to depart just as rapidly as they were able. So, although it is rare to see Tranter’s represented in movies made about these characters and events in history these revolvers played a significant role. In the 1975 Australian television series “Ben Hall” the Tranter’s are replaced with Colts as you will see in the opening titles below.

Some model Tranter revolvers were equipped with double triggers; a normal trigger inside the trigger guard that fired the revolver, and a longer trigger that extended below the trigger guard to cock the hammer and rotate the cylinder.

The revolver used by William Macleay in his “bit of excitement” with the Hall gang was of this type. It was one of those design ideas that seemed good in theory as it provided a safe carry but a light crisp trigger with which to fire the revolver. However it was a more complex manipulation to manage and when under stress by being under fire it proved more intellectually challenging than people wanted. As many reading this will know there is not much of anything that beats the instinctive effortlessness of drawing and firing a double action revolver. So the conventional single trigger, double action style tended to become more popular. The two revolvers coming up for sale are of this type. 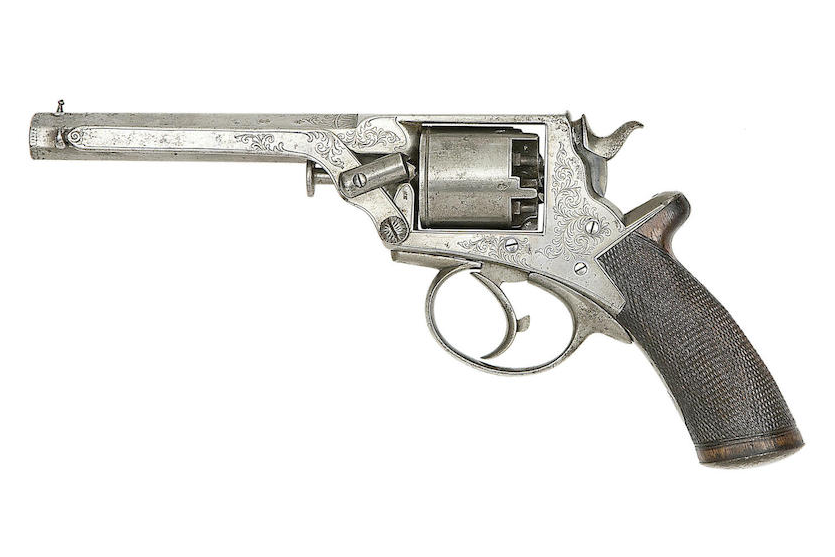 The 54 Bore Tranter Patent revolver coming up for sale by Bonhams.

The 54 Bore revolver coming up for sale is complete and has an octagonal sighted barrel of 15.2cm which is engraved  “‘C. Comp.y, 1200 Yards, Sept.r, 1867. 1st Prize Won by …”. So it appears to have been given as a prize to the winner of an army rifle competition. It’s top strap is signed in full and the revolver has a foliate scroll engraved frame, rammer, trigger guard and butt cap. The revolver also features a pivoting safety-stop, sprung arbor-pin catch, and a chequered, figured, rounded butt. There is some rust pitting as can be seen from the picture above but this Tranter looks to be in nice condition with plenty of character. 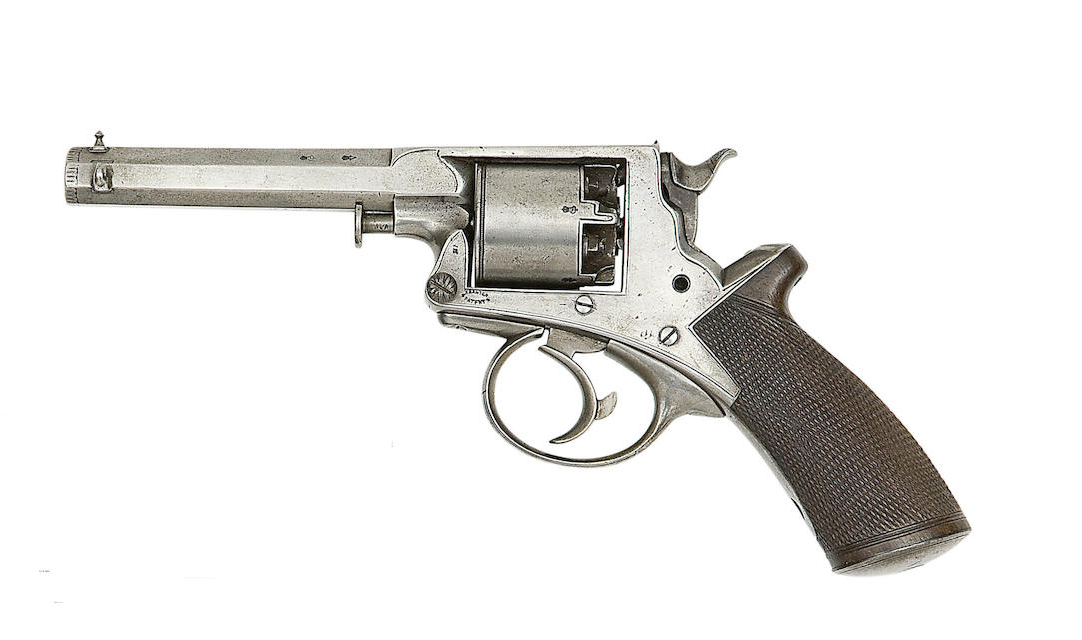 The 120 Bore Tranter Patent revolver coming up for sale by Bonhams.

The 120 Bore revolver being offered for sale is not quite complete as it is missing a hammer screw, a butt screw and the rammer (compare with the picture above of the 54 Bore which is complete). This revolver has an octagonal barrel of 11.5cm, border engraving, a pivoting safety-stop, sprung arbor-pin catch, and a chequered, figured, rounded butt. This revolver also has some minor rust pitting but is in quite nice condition. Both the 54 Bore and 120 Bore revolvers have London proof marks.

Tranter revolvers and revolving carbines were in production from 1855-1878 and gained a well earned reputation for build quality and good design. That they were so popular with people who knew their lives would depend on them is a testimony to them. Tranter’s went through the percussion cap muzzle-loading era, the rim-fire cartridge era, and were in regular production up into the centre-fire cartridge era. Tranter revolvers were used by British Army officers in the Zulu War, which was the last war in which Tranter revolvers were officially used. The centre-fire revolvers were made in a range of calibres up to the .577. Click here for an article on the “Forgotten Weapons” website to read about that.

Tranter revolvers are a desirable addition to a collection and in fact one could have an interesting and historically significant collection if one collected only Tranters. Their role in human history during the time of their manufacture was significant, and they were owned and used by people whose lives were far more interesting than any character of fiction.

You will find the Bonhams sale page for the Tranter 54 Bore revolver if you click here.

You will find the Bonhams sale page for the Tranter 120 Bore revolver if you click here.

George Prescott’s “The English Revolver: A Collectors’ Guide to the Guns, their History and Values” contains some information about Tranter revolvers. Click here to see it.

And below is a video examining a late production centre-fire cartridge Tranter revolver to provide an idea of the character of these firearms. Included in the video is a discussion on creating cartridges for it. Owning an antique firearm is just like owning a veteran or vintage collectible car; in both cases the joy of owning such a thing is in being able to use it sometimes. As 3D printing becomes more technologically advanced it is to be hoped we will be able to 3D print perfect cartridge cases for our firearms that require obsolete cartridge cases. Perhaps that may prove to be a business idea for someone out there.