After experimenting with Bosch electronic fuel injection in the Series 2 V8’s Aston Martin reverted back to four dual throat Weber carburettors for the Series 3 which was in production from 1973 until October 1978 when the October Introduction “Oscar India” Series 4 cars were released, still with the four dual throat Weber carburettors. Aston Martin, like all car makers selling in the US market, were adversely affected by the propaganda influence of an American musical called “Hair” in which one of the songs which was titled “Air” had lines such as;-

And so with everybody’s “consciousness raised” US legislators were bringing in anti-pollution laws that made it more and more difficult for manufacturers to achieve, and Aston Martin were one of those manufacturers. So the four dual throat Weber carburettors were a necessary strategy to achieve compliance with these vehicle emissions standards. 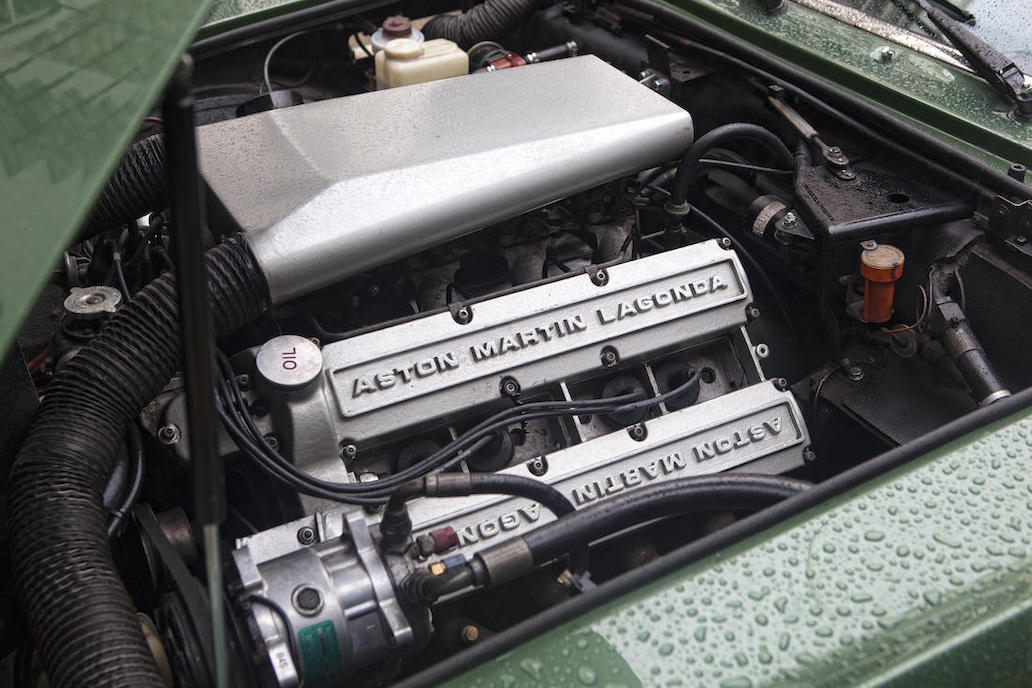 The Aston Martin 5.3litre V8 engine designed by Tadek Marek is impressive to look at and produced impressive power when not muffled by emissions controls.

So as motor manufacturers struggled to meet emissions standards the penalty was reduced power and increased fuel consumption. This is not to say that finding ways to reduce vehicle exhaust emissions is a bad thing, quite the contrary, but during the development stages there were significant problems. Over the ensuing decades however Aston Martin owners have had the opportunity to improve their cars in many ways including progressively getting the engines “problem solved” to the point where those old issues are now resolved and the Tadek Marek V8 is able to “breath deep” and produce its intended power of over 300bhp. 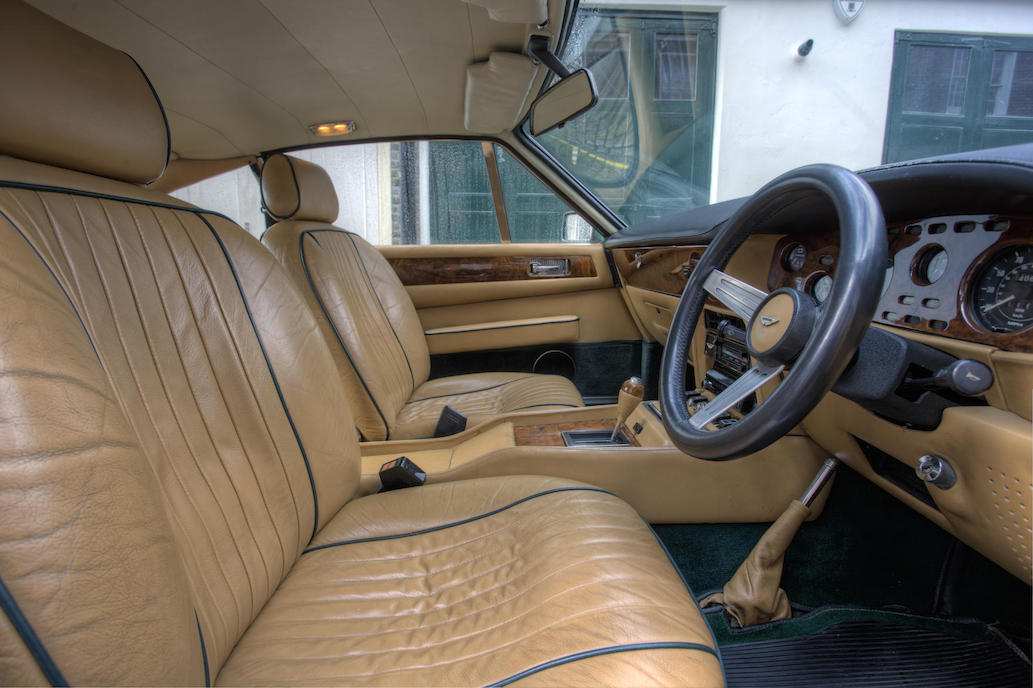 The interior of the Aston Martin V8 is luxurious and continues to look so even with the patina of years of use.

The Aston Martin V8 was a car created to be a luxurious and quite large vehicle with appeal to US customers for whom the car would appear comparable in size to the standard vehicles they were used to. The Britishness of the leather seating and wood veneer dashboard and door trims exude an air of quality, the Aston Martin V8 giving the impression of being somewhere between a Bentley and a Ferrari, except made in Britain, and Aston Martin managed this blend exceedingly well. Just like Rolls Royce and Bentley, Aston Martins were completely hand made. 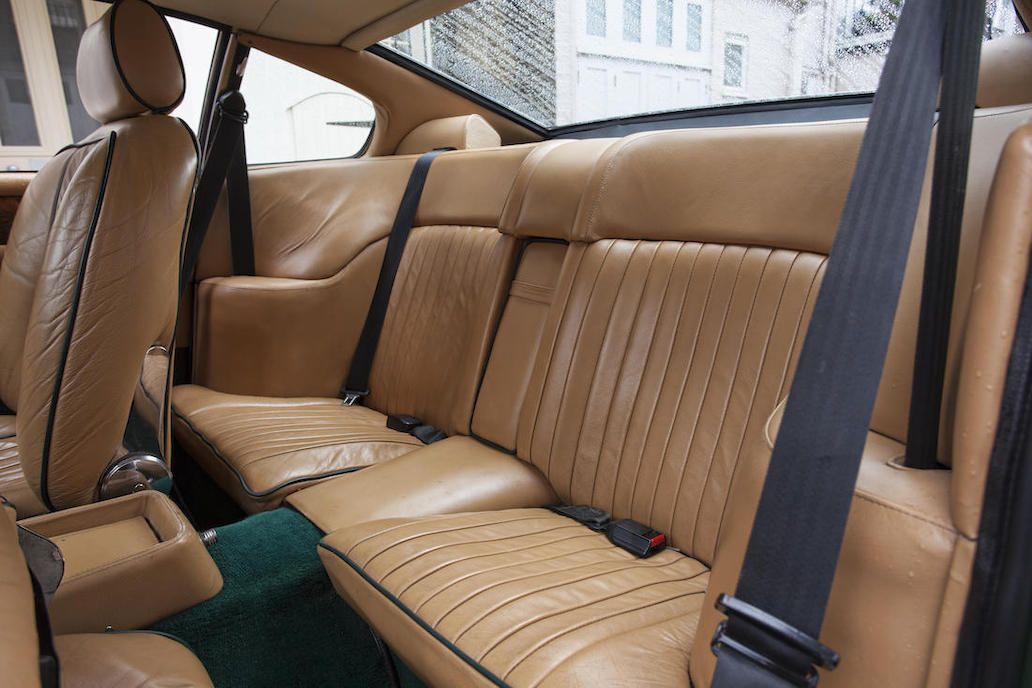 Elegant and comfortable seating in the rear, unusual in a sports car.

The Series 4 cars introduced in October of 1978 are amongst the best examples of the Aston Martin V8, especially when they’ve been improved over the years as our feature car has. This pretty Burnham Green Aston Martin V8 Series 4 has been well used and well maintained over the decades having a current mileage of approximately 140,000 miles. So it has been nicely run in and has been in consistent use giving it a patina of gentle use, and the character that goes along with that. 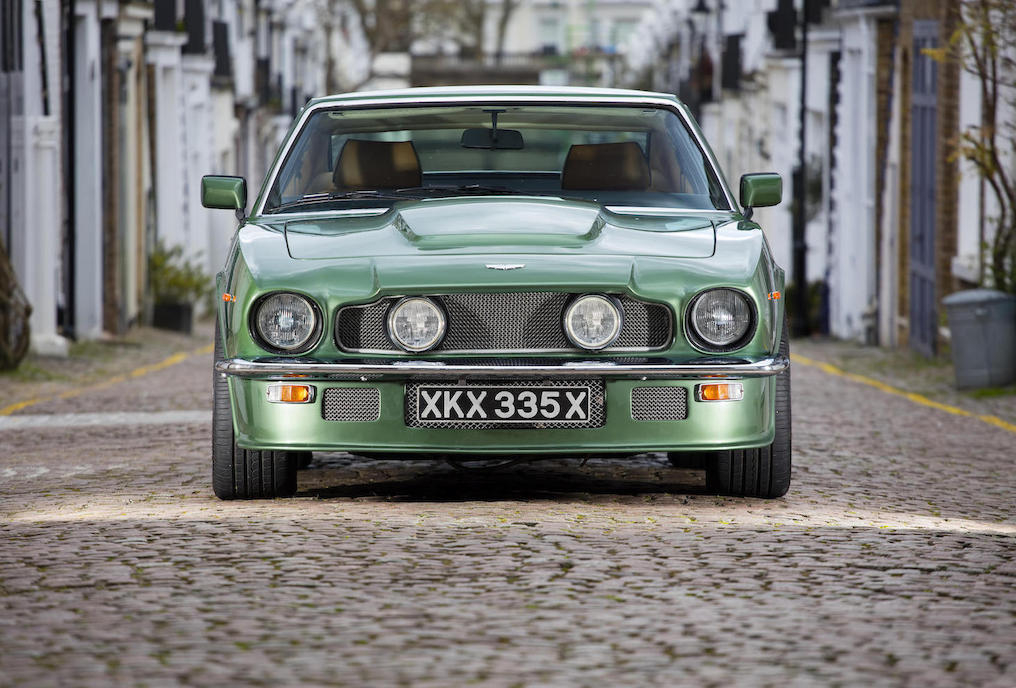 This has been an actively used Aston Martin V8, it is a driver’s car.

Unlike so many collector’s cars this is a car to be driven and enjoyed, not just preserved and looked at. This is a car one would buy to drive and to appreciate.

The looks are classic Aston Martin.

This car received a full bare metal restoration in 2006. The car has also received a number of upgrades and improvements including a TF2 performance kit for the reconditioned automatic transmission; Koni dampers all round; lightweight high-power starter motor; up-rated brakes with stainless hoses; stainless steel exhaust and manifolds; K&N air filters and cold-air induction; and split-rim alloy wheels.

The car is in very nice condition and has a number of improvements.

This is an opportunity to own a very nice and upgraded example of the Aston Martin V8 Series 4.