Browning has done something that was so obvious that it’s really quite remarkable that it hadn’t been done before. They took the action of the Browning BAR self-loading rifle and re-designed it as a straight pull bolt action repeating rifle. This has the advantage of creating a rifle that meets legal restrictions on self-loaders that exist in come countries, and yet provides a bolt action repeating rifle that enables the shooter to cycle the action whilst keeping his/her eye on the target. You’ve no doubt heard of the James Bond movie “Live and let die”? The description of how this new straight pull bolt action from Browning works is “Pull and let go”. The bolt is pulled back to eject the fired case and then simply released allowing the constant force spring to return the bolt to battery chambering a new cartridge in the process. Not only is this a fast reflexive action but it also means you don’t have to push the bolt forwards – the advantage being you keep the rifle pulled firmly back into your shoulder and thus stable for the next shot. When the last round has been fired and ejected the action locks open. 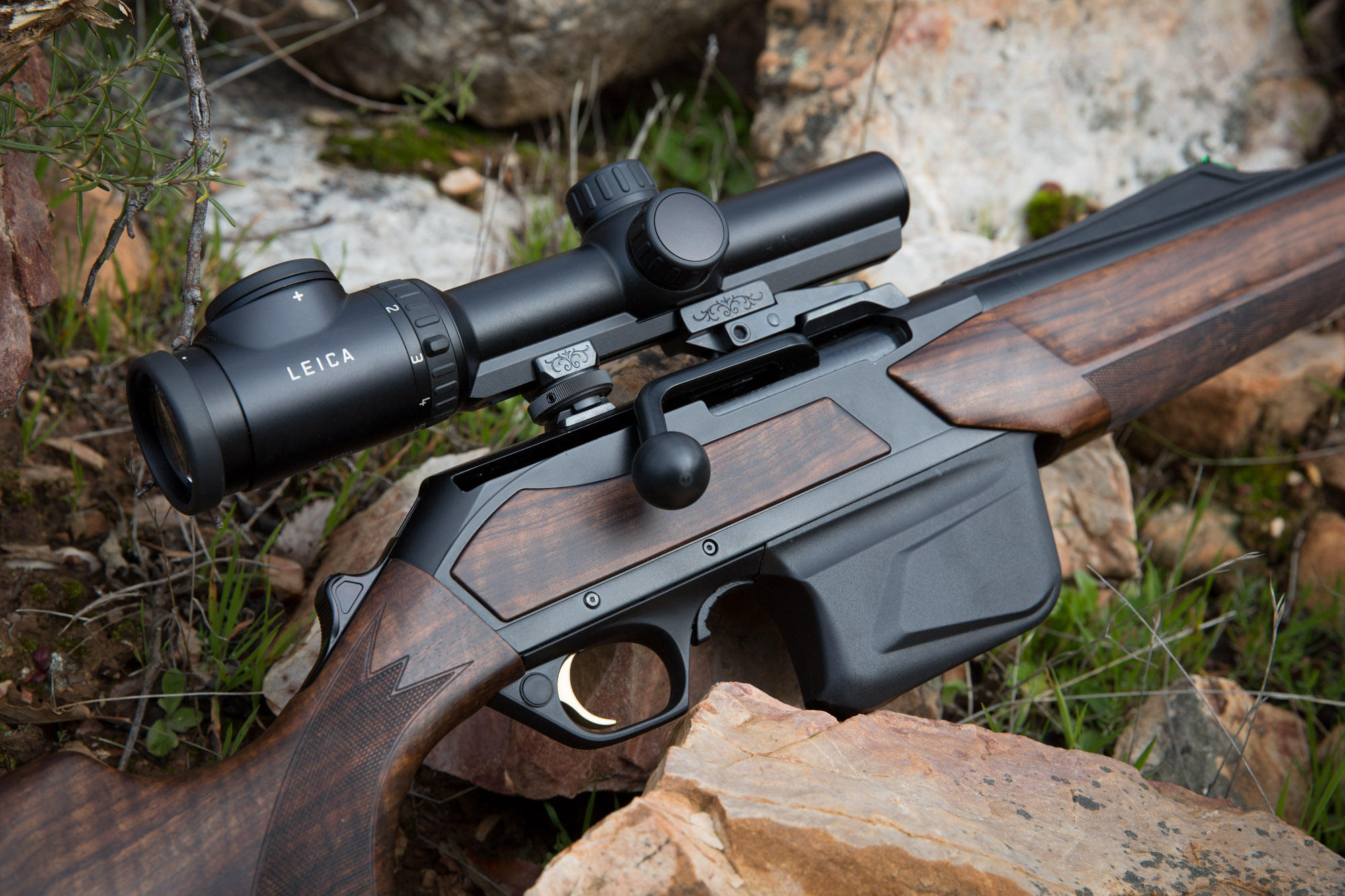 The Browning Maral uses a fully enclosed bolt action both for safety and to ensure the shooter does not need to pull the bolt back at their face. The rifle has a detachable magazine system and can be had with a standard capacity magazine of four rounds (three for magnum calibers) or a vermin control capacity magazine of ten rounds (standard calibers, as fitted in this photograph). (Picture courtesy Browning).

Straight pull bolt action rifles have been with us for a very long time, well over a century, early successful designs coming from both the United States such as the M1895 Lee Navy, and Europe with Ritter von Mannlicher’s M1895 straight pull rifles issued to the army of the Austro-Hungarian Empire. The straight pull bolt action had something of a set back when the Canadian Ross rifle was adopted by Canadian forces heading to the Western Front of the First World War. One model of the Ross rifle had a design fault that allowed the bolt to be re-assembled incorrectly and be then fired with the bolt un-locked resulting in serious injury to the shooter. Unlike the Mannlicher straight pull the Ross rifles did not perform well in the mud of the trenches of the First World War and were withdrawn and replaced with Lee Enfields. The reputation of the Ross however hung as a dark shadow over the notion of a straight pull rifle for decades and it has only been the creation of a modern generation of straight pull rifles such as the Blaser and Mauser M1996 that have demonstrated to sporting shooters the advantages of a straight pull bolt action repeating rifle. 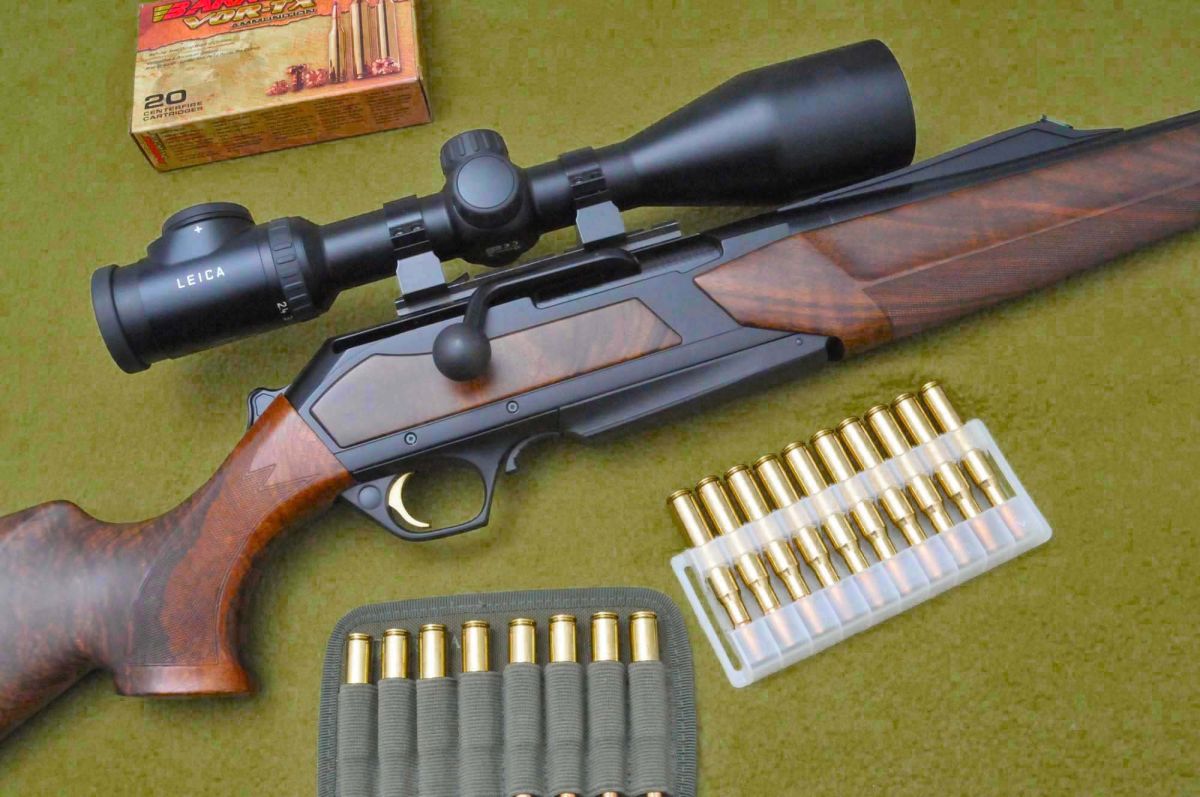 Despite the fact that the Browning Maral is not as fast to recycle as a semi-automatic BAR it offers some advantages that the BAR cannot match. From the safety standpoint because the rifle does not automatically reload a new cartridge in the chamber the shooter has complete control over if and when a new round is chambered. So whereas with a semi-automatic the shooter has to be reliant on the safety catch with the Browning Maral he/she has more control. The Browning Maral does not have a safety catch per se but a cocking/de-cocking safety switch. This makes the rifle safe to carry with a cartridge in the chamber but de-cocked and unable to fire. The other advantage of the Browning Maral is that it provides consistent chambering of the new cartridge by virtue of the constant pressure spring system. This of itself should contribute to the rifle’s accuracy potential. The rotating bolt lock up is by seven front locking lugs that provide not only strong, but also concentric chambering of a cartridge, so the accuracy of this rifle should be good, and certainly a lot better than “minute of deer”. 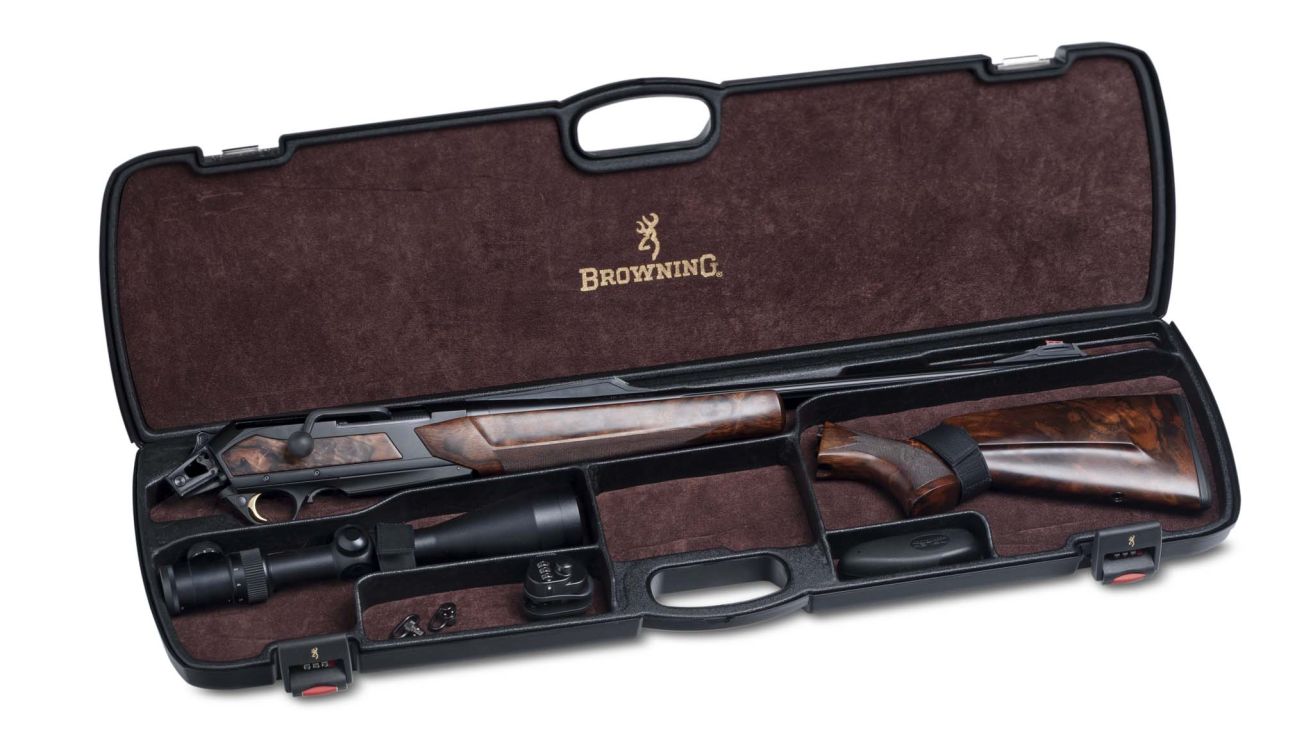 The Browning Maral is able to be taken down for convenient transportation. Note that the take down does not require the barrel to be detached from the action. (Picture courtesy all4shooters.com).

Browning provide a travel case for the Maral which exploits the take down feature of the rifle. The Maral does not require the barrel to be detached from the action for take down but instead keeps the barrel and action intact to preserve accuracy and instead allows the butt stock to be removed. Similarly the Maral can be had with QD (quick detachable) telescopic sight mounts so the whole rifle packs into a conveniently small travel case.

In the Browning video below you can see the Maral demonstrated so you can appreciate its innovative features. 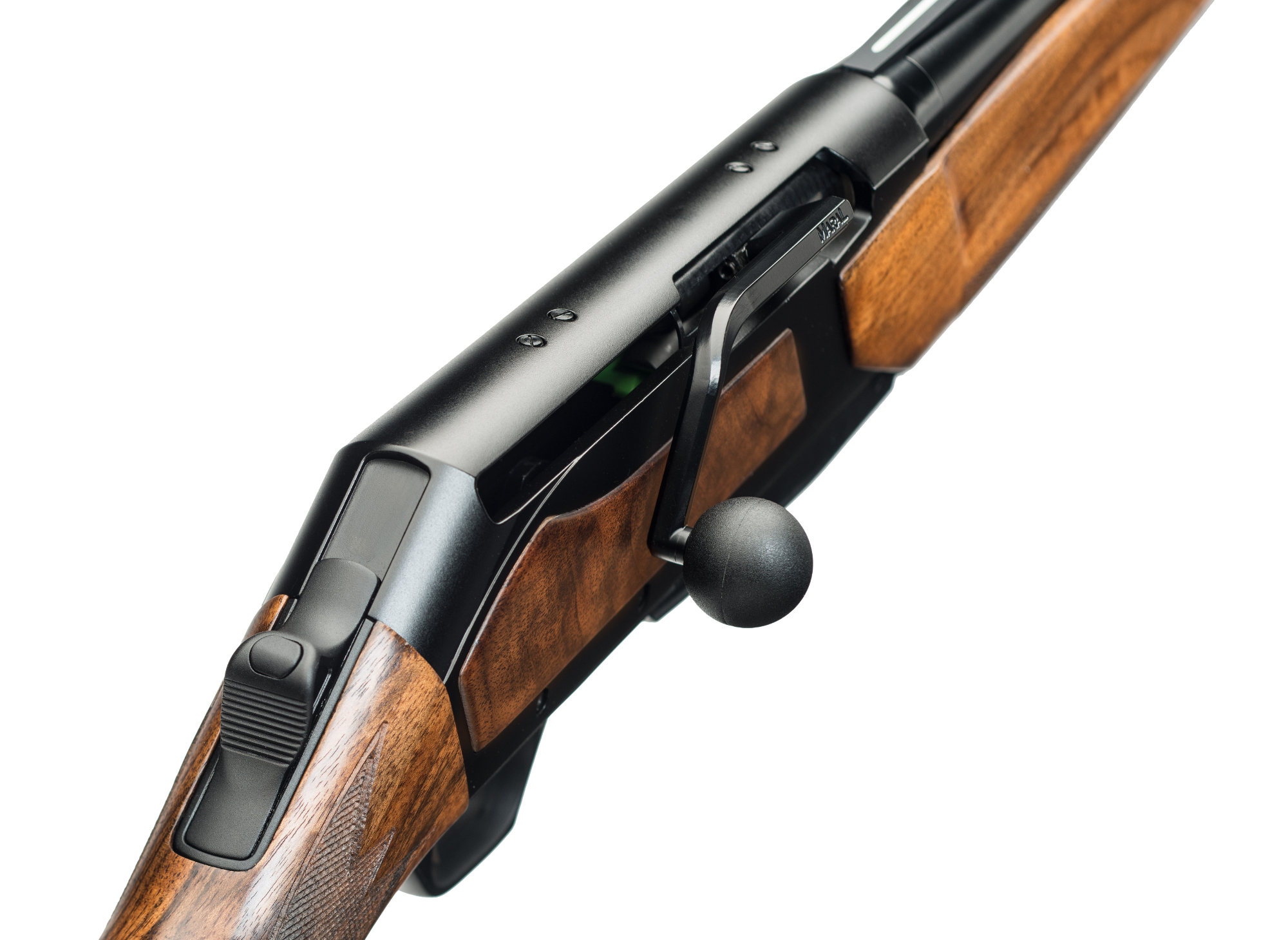 Weight: 7lb (3.2kg) depending on model and caliber.

Recoil Pad: 15mm or 25mm depending on caliber. 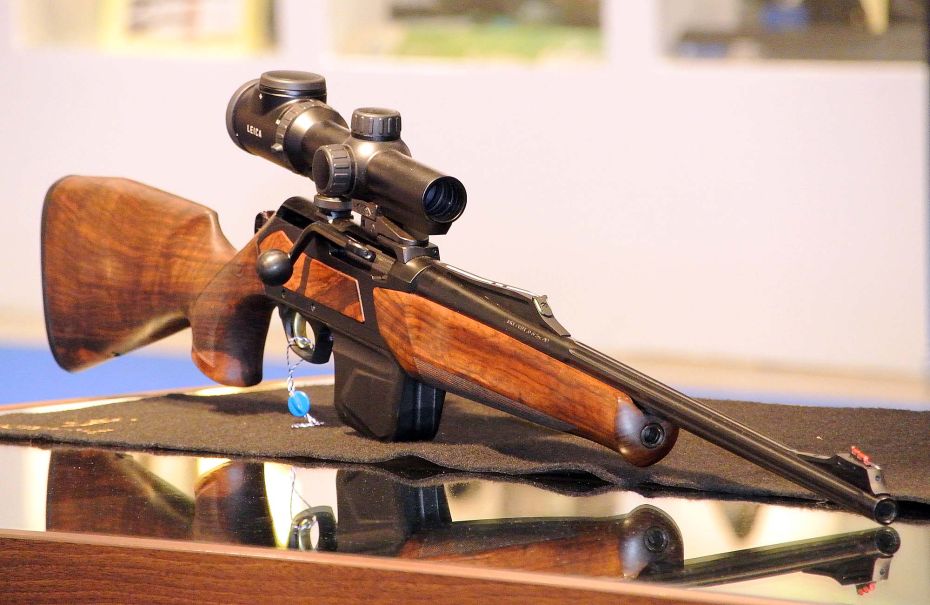 The cocking/de-cocking safety switch of the Browning Maral requires that the rifle-scope be mounted a little high, in the continental style, to leave adequate room for its operation. (Picture courtesy all4shooters.com).

Are there any disadvantages to this beautiful rifle? The obvious one is the use of an enclosed receiver which means that the barrel cannot be cleaned from the breech end but must be cleaned from the muzzle. Use of a muzzle protector when doing this can help although I personally prefer to insert the cleaning rod from the muzzle until the end appears in the breech, and then screw on the jag or brush before pulling it back out so I’m still cleaning from breech to muzzle. That’s the method I use on Martinis etc. I also use a good quality plastic coated cleaning rod such as a Dewey, not a stainless one. The other thing to beware of is not to attempt to mount a rifle-scope too low on the action because the cocking/de-cocking safety switch requires a bit of room for its operation. Other than that I don’t think there are other downsides.

Perhaps the only remaining question for many will be “What’s a Maral?” What is this thing whose name Browning decided to use for their innovative straight pull rifle. A maral is a type of Central Asian elk and they can be found in Kazakhstan and the Tien Shan. What better way of finishing a post on a rifle named after the Maral than to watch a short video by Seladang of hunting them in Kazakhstan. None of the hunters use a Browning Maral for this hunt however but it will give you a chance to see what Maral hunting is like and who knows, perhaps you will be amongst the first to try hunting a Maral with a Browning Maral? Best choose the .300 Winchester Magnum version if you do, Maral are big and require some stopping power to bring down.