I think the Daimler Ferret scout car was quite probably the inspiration for the Daleks of the British science fiction television series Doctor Who. A Dalek is a robotic looking creature that moves around shouting “exterminate” in a chilling radiophonic voice. The Daimler Ferret looks as if it could be a mobile robotic vehicle from science fiction except it was really a British Army military vehicle of the Cold War that looks rather like a Dalek. Curiously though, although the British were building these fearsome military machines they did not give them fearsome names. The Daimler Ferret was the direct descendant of the World War II Daimler Dingo. A Dingo is an Australian native dog that cannot bark and runs away at the first sign of danger, and that was the job role of the Daimler Dingo scout car – to get in behind enemy lines and scout out their positions and strengths – and to avoid detection. If faced with a fight the best strategy for a scout car is to run away to get the precious information back to headquarters. A ferret similarly is good at getting into burrows and places where rats are hiding and flushing them out. So whilst the Nazis took themselves terribly seriously and called their military vehicles by imposing terrifying names such as “Panzer”, the British sense of humor did the exact opposite, and so we get military vehicles with such non terrifying names as the Leyland Hippo, Humber Pig and the Wolesley Mudlark to go with the Daimler Dingo and the Daimler Ferret. Perhaps the British were hoping that the Nazis would be so busy laughing hysterically at these silly names that they’d forget to fight. 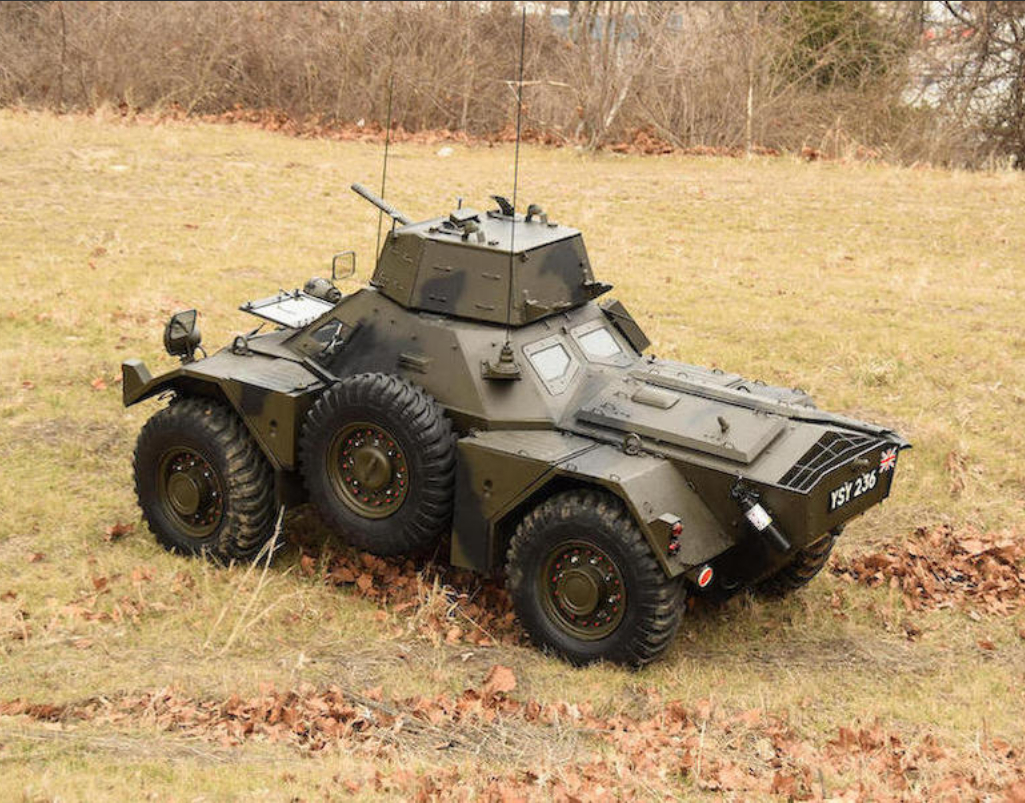 Rear view of the Daimler Ferret showing spare tire. The tires for this vehicle are run-flats.

The ancestry of the Daimler Ferret really begins in 1938 when the British Army realized that there was a real possibility of having to go to war against Hitler’s Third Reich and so they approached luxury car maker Daimler with a view to their creating a small and easily concealed scout car. The scout car would be lightly armored, just carrying a Bren light machine gun plus the crew’s small arms. The scout car also needed to be fast, and if it needed to escape in a hurry it needed to be able to back out of trouble just as quickly as it had gotten into trouble. Within a year Daimler had created a near perfect design, so well thought out in fact that it could go just as fast in reverse as it could going forwards, and it could do 60mph on road and off road – forwards or backwards. 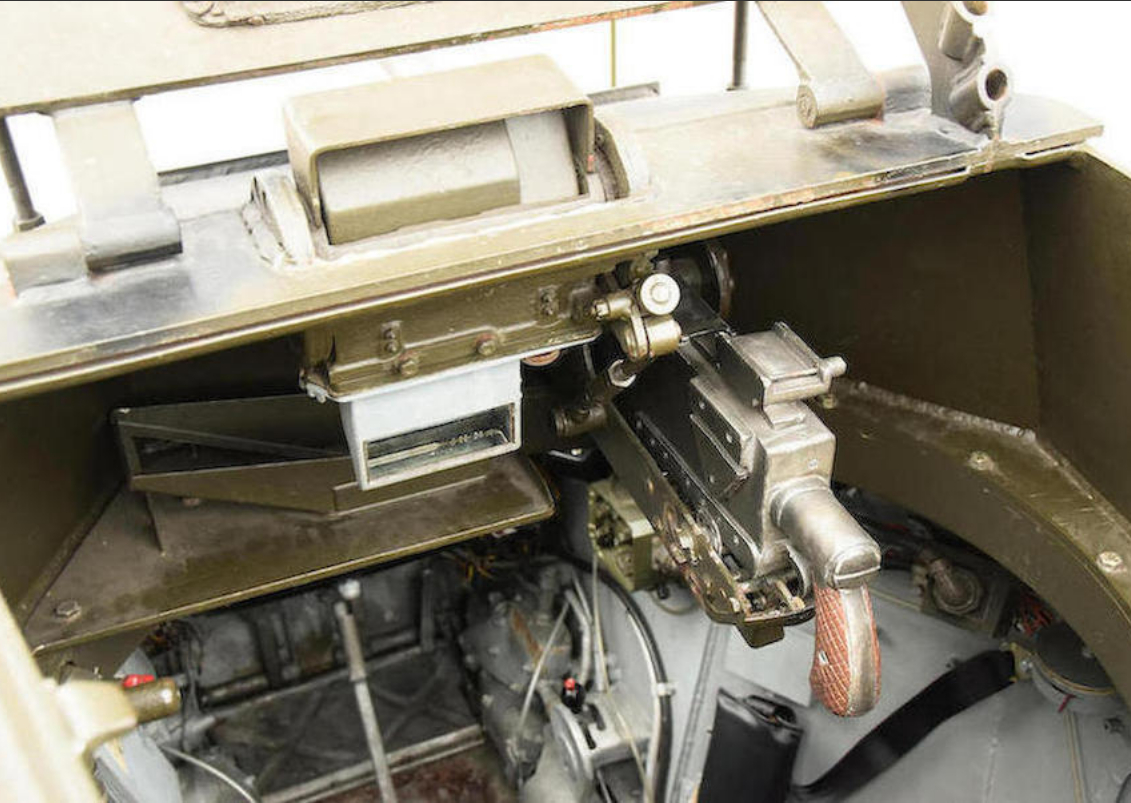 Instead of the Bren of the wartime Daimler Dingo the Cold War Daimler Ferret was fitted with a NATO standard Browning M1919 .30 caliber machine gun. This Ferret however is fitted with a paint-ball gun.

The development of the Daimler Ferret began in 1949 in a Britain that was still on rationing for the general population but which understood that just as one menace to the world had been removed so new menaces were emerging and the military were going to need to be well equipped to deal with those emergencies. Britain still had her overseas colonies at that time and her armed forces were to be kept busy in many parts of the world, thus the need for a fast lightly armored vehicle had not disappeared with the advent of the nuclear bomb. 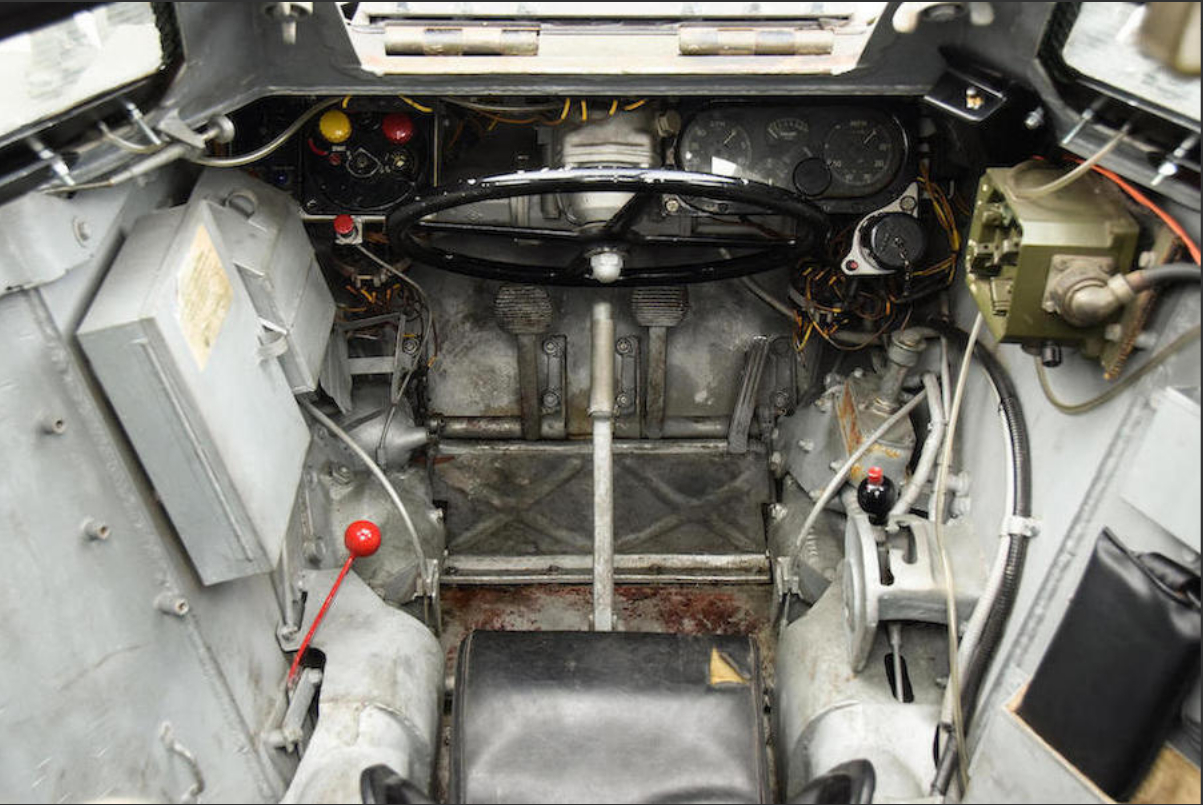 The steering wheel of the Daimler Ferret tilts at an odd angle to ensure easy escape for the driver if needs be.

Like the Daimler Dingo before it the Ferret uses an “H form” drive with the engine and gearbox driving to a centrally mounted differential and then by propeller shafts to each of the wheels providing fully independent suspension and vastly improved ground clearance due to the elimination of conventional axles. 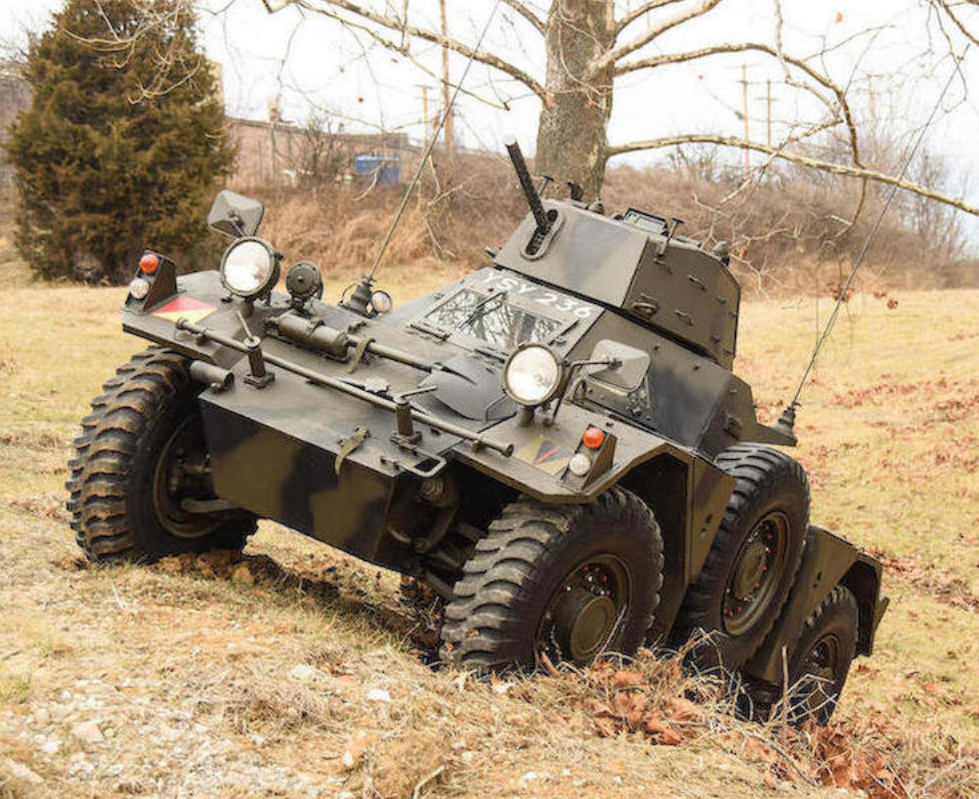 As can be seen in this picture the H form transmission eliminates the beam axle and allows a high ground clearance with fully independent suspension.

The engine of the Ferret is a petrol/gasoline Rolls-Royce B60 IOE (inlet over exhaust) in-line six cylinder producing 129bhp; enough power to give the little Ferret a 58mph top speed with which to get into trouble and get back out of trouble. I guess that the top speed might become a bit faster as the ammunition runs out. 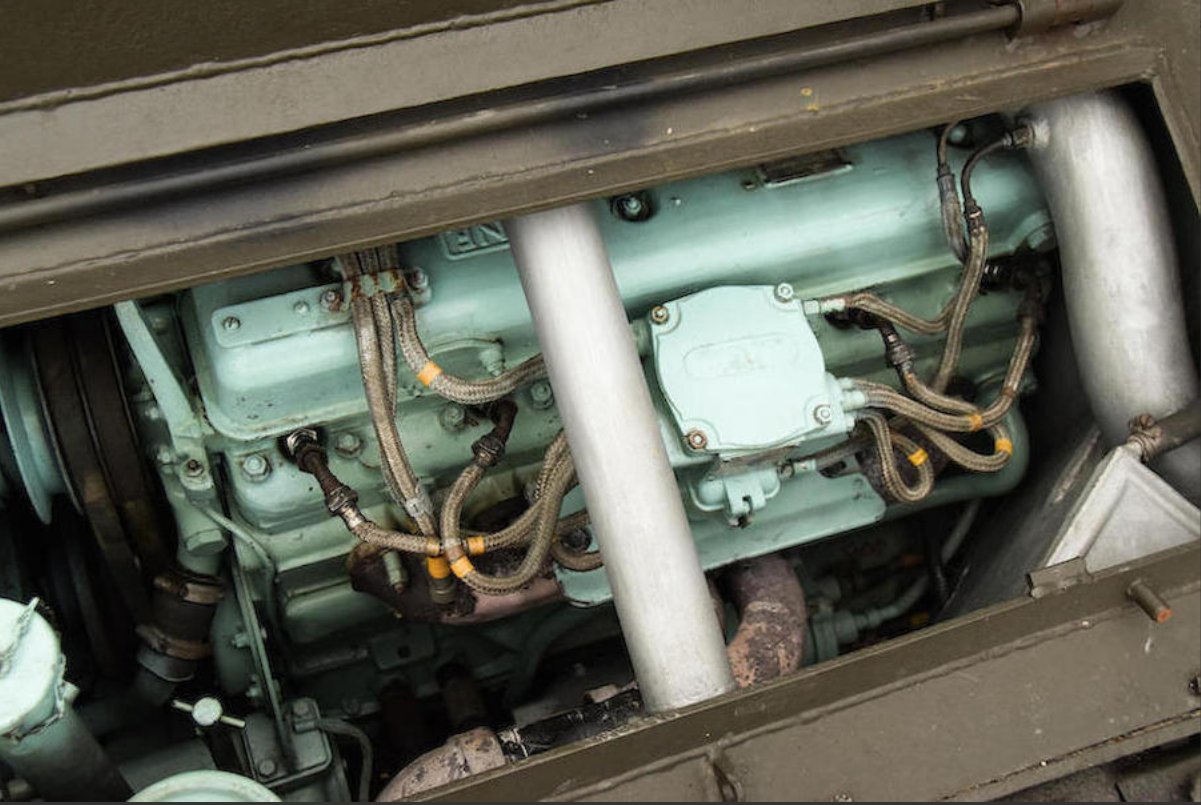 The Rolls Royce IOE six cylinder engine that sends the Ferret hurtling across the landscape.

There can be few more impressive cars to park on one’s front lawn than an armored car. You can imagine the conversation; “You have a Ford Mustang? I’ve got a Ferret with a built in paintball gun“. Ferret beats muscle car every time.

You will find the sale page for this ultimate paint-ball car if you click here.

Sadly we don’t think the nice people at the Fernandina Beach Golf Club will allow you to test drive and shoot this cute little Ferret on their fairways.

Expected sale price is in the range of USD$40,000-$60,000 but this Ferret is being offered without reserve so you might just get lucky and get a real bargain. 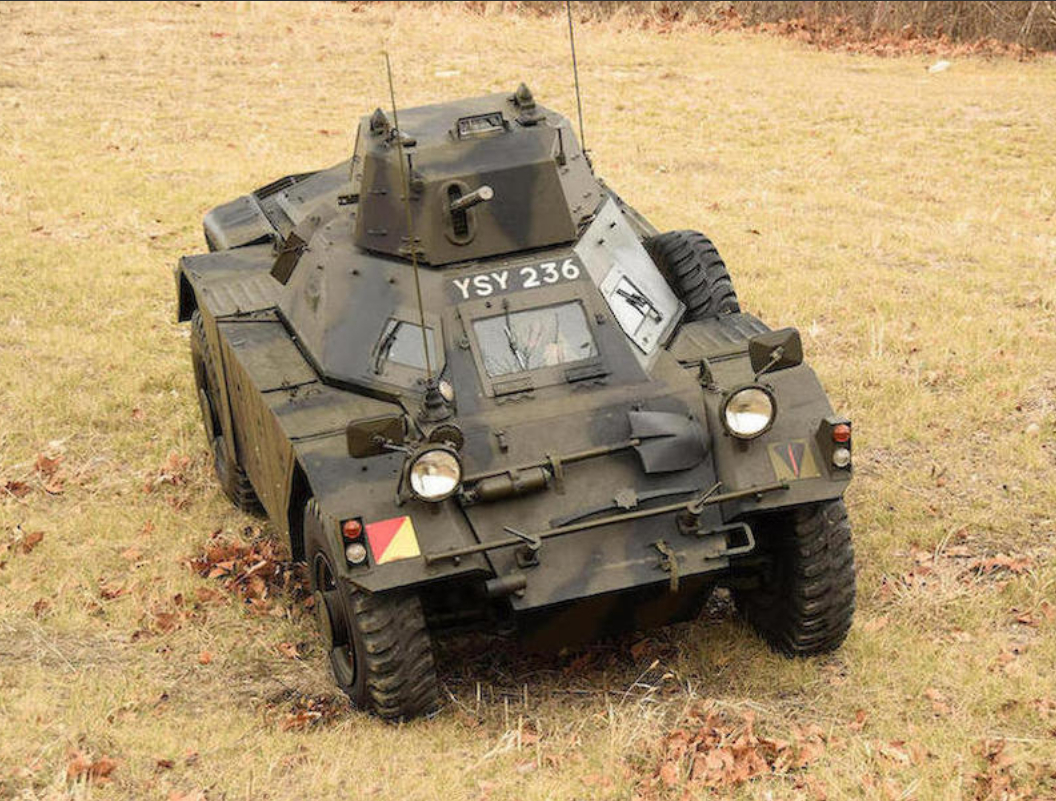 All you need is a buddy to drive and a loudspeaker system through which to bellow “exterminate” as you do paint-ball battle with all comers.