Samuel Colt was a businessman, and at the outbreak of the Civil War in 1861 he was placed in a position where, like everyone else in the United States, he would need to choose a side to support. He had initially been involved in selling firearms to both north and south, and had sold 2,000 revolvers to Confederate agent John Forsyth in 1861: and in April of that same year was also asking the Secretary of the Navy Gideon Welles to inquire of President Abraham Lincoln and Secretary of War Simon Cameron how Colt might assist with the Union’s war effort. He had offered to produce no less than 100,000 firearms that year. His transaction with the Confederacy had caused him negative press in such newspapers as the New York Daily Tribune, the New York Times and the Hartford Daily Courant, and he had been labeled a Southern sympathiser, and thus a traitor to the Union. Not only that but there was another questionable transaction Samuel Colt had been involved in.

Colt had been involved in a transaction with a General Ripley in which Colt paid USD$10 each for 10,000 Enfield rifles from General Ripley. These were sold to Samuel Colt on the assertion that the bores were 1/25″ smaller than the regular army rifles and were thus unsuited to Union Army use, so they were disposed of. The government realized this was not a good transaction and then attempted to buy the rifles back again for USD$20.00 each but Colt refused and insisted on being paid USD$25.00 for each one. Colt may well have been thinking in terms of selling them to a higher bidder, and the Confederacy may have been in his thinking. But the scandal in the newspapers such as the Detroit Advertiser put both Ripley and Colt in a rather negative light.

By April of 1861 the Civil War was underway and Samuel Colt was forced to choose a side. Thus it was that on May 16th, 1861, Samuel Colt was commissioned as a Colonel in the 1st Regiment Colts Revolving Rifles of Connecticut. By this time Samuel Colt was  dealing with gout, which had been affecting his health gravely, and so he was discharged from the Union Army on June 20th, just over a month later.

Both to gain credibility with senior Union Army officers and thus redeem his reputation that had been somewhat tarnished by the Ripley affair Samuel Colt engaged in some “free gift” salesmanship as a part of his overall strategies to win the support and trust of the Union. The Union were already alarmed by the events of the war in the fall of 1861, including the Battle of Ball’s Bluff on October 21st which had caused sufficiently heavy casualties to alarm Congress and motivated it to set up the Joint Committee on the Conduct of the War, something that seems to have served to create division rather than unity. This mood of uncertainty did serve to help Samuel Colt in being seen, quite rightly, as a man who was positioned to provide the Union Army with much needed arms. Thus it was that for Colt to give presentation sets of his revolvers was a timely thing for him to do to affirm his loyalty, and his ability to supply arms to the army in the numbers needed.

These sets of revolvers were sent out to about fifteen individuals with known recipients being General James Wolfe Ripley (Chief of Ordnance, and the man who had been involved with Samuel Colt in the scandal concerning the 10,000 Enfield rifles), General Randolph B. Marcy (McClellan’s chief of staff and father-in-law), General Joseph K.F. Mansfield (commanded the Department of Washington), General Irvin McDowell (a division commander in the Army of the Potomac), General Ambrose E. Burnside (commander of the North Carolina Expeditionary Force), General Thomas W. Sherman (commander of the Port Royal Expedition), General Andrew Porter (provost marshal of the District of Columbia, more details below), General George B. McClellan (general-in-chief of all the Union armies), General Nathaniel P. Banks (commander of the western district of Maryland), General Benjamin F. Butler (commander at Fort Monroe), General William Anderson Thornton (commander of multiple arsenals and also an inspector during the war), General Lorenzo Thomas (Adjutant General of the U.S. Army), Colonel James Cameron (brother of the Secretary of War, who was killed at the First Battle of Bull Run prior to the presentation of these revolvers), Secretary of War Simon Cameron, and Edward S. Sanford of the American Telegraph Company (worked with the U.S. Military Telegraph Service/Corps), and last but not least, Brigadier General Andrew Porter who had been appointed to that rank in May 1861 in the wake of his efforts commanding the 1st Brigade, 2nd Division at the First Battle of Bull Run.

The choice of revolver models to include in these sets was clearly thought through by Colt. The Model 1860 .44 caliber Army revolvers were intended for field use with the battlefield stopping power that could mean the difference between life and death. The addition of both a Navy Model 1861 and the more compact Model 1862 Police demonstrated a revolver for Navy use, and a very petite revolver for concealed carry where needed.

The second part of the set also included a powder flask, bullet molds, caps and tools.

Samuel Colt was in very poor health at the time these sets were given, although he had managed to host an official party in November 1861 comprising Secretary of War Simon Cameron and his party, and also Governor William A. Buckingham of Connecticut with his staff, at Coltsville. There they were treated to a tour of the Colt factory and that of the Sharps Rifle Co. followed by a visit to Armsmear where they were entertained by Samuel Colt and his family. It is quite likely that sets of revolvers were presented to guests at that function.

Samuel Colt passed away from the complications associated with gout on January 10th, 1862, about two months after that event.

There is one of these sets of revolvers coming up for sale by Rock Island Auction as a part of their Premiere Auction to be held between November 20th and December 2nd, 2018. That is the set that was presented to Brigadier General Andrew Porter. The set comprises the original pair of Model 1860 revolvers, and the original Model 1861 Navy. However, the original Model 1862 Police revolver (serial number 6497) was replaced by William M. Locke with a similar example (minus the inscription) reportedly because the original was in significantly lower condition than the other revolvers in the set. The Model 1862 Police is a quite diminutive revolver, having a five shot cylinder and being in .36 caliber these are a “pocket pistol” and it may well have been that Brigadier General Andrew Porter had found it to be a very convenient carry revolver, which would account for the original being in a more worn condition than the others.

(Note: You can find the book “The Art of the Gun: Magnificent Colts” by Robert M. Lee and R.L. Wilson on Amazon if you click here.)

The condition of this set is described by Rock Island Auction as follows: “Excellent. This revolver and its mate are easily among the finest Model 1860 Army revolvers extant even if you set aside the high quality of finish and materials and the historic inscription from Samuel Colt. With those combined with the condition, these revolvers should be virtually priceless and would be important centerpieces in any extensive private or public Colt, American, or Civil War collection. It retains 97% plus of the bright, high polish, original blue finish with minor loss on the right side of the muzzle, slight edge wear, and minor spots of faint surface oxidation; essentially all of the original vibrant original case colors on the loading lever, frame, and hammer, strong original bright blue finish on the screws and trigger; 95% plus original silver plating on the front strap which has taken on an attractive natural patina, light flaking to the right and rear of the serial number; crisp cylinder scene and markings, and very fine hand engraved inscription. The grip is also excellent and has effectively all of the original glossy varnish, attractive figure, and minor handling and storage wear. The revolver is mechanically excellent and shows no signs of having ever been fire. Provenance: Albert Foster Jr.; William M. Locke Collection; Carl Press Collection; The Robert M. Lee Collection.”

You will find the sale page with a great deal of detail if you click here.

Rock Island Auction feature this set in a video also:

This set of revolvers is a piece of American history with a direct link to a major Civil War figure, and to Samuel Colt, a man who stands tall in America’s history books. It has been cared for for 157 years, and now its time for it to pass into the hands of another custodian. 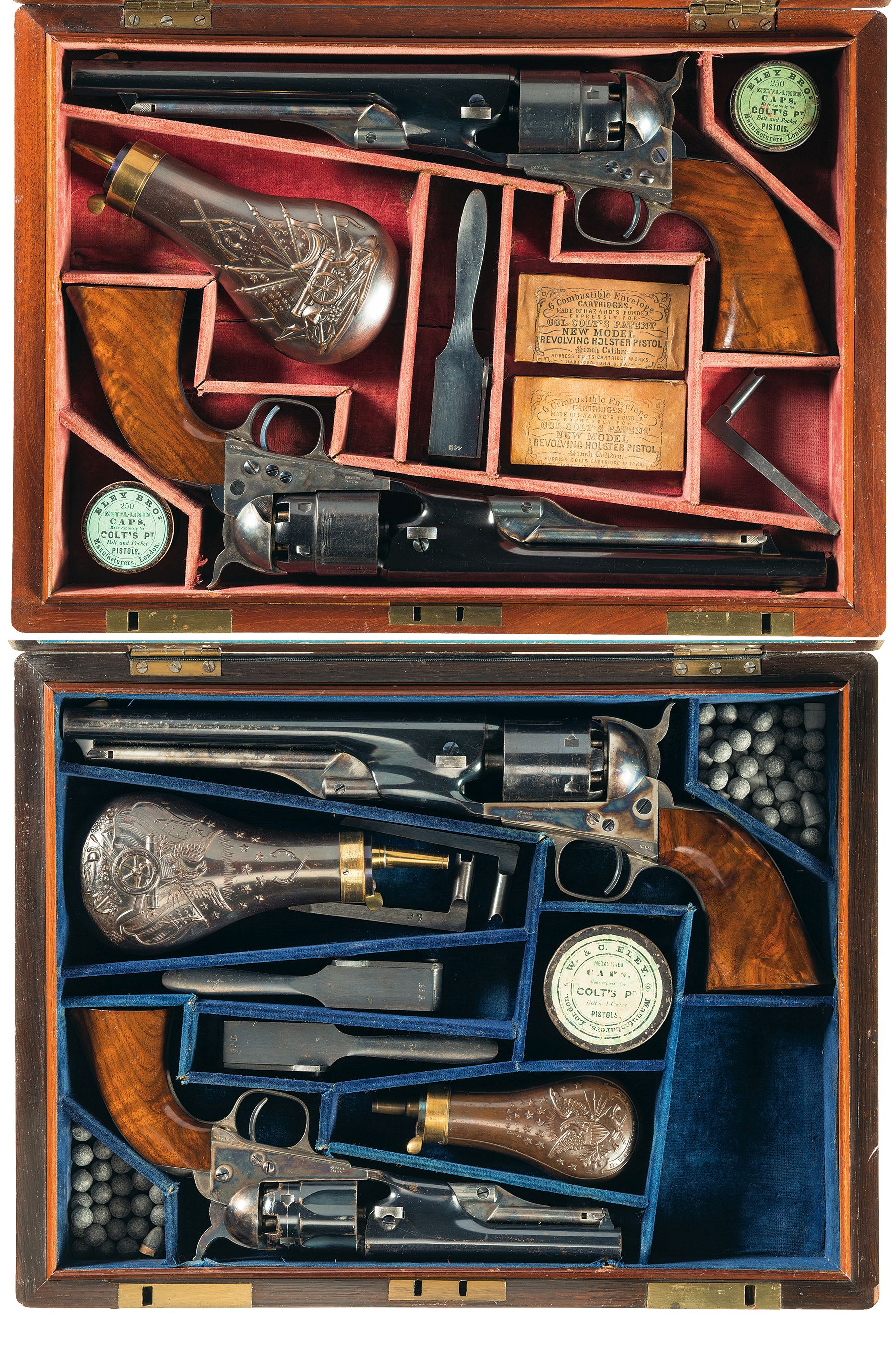 We Wish You a Joy Filled “Papa Panov” Christmas