Friedrich Geiger’s design for the Mercedes-Benz 500 K and 540 K broke the mold for thirties chassis design. Both featured fully independent suspension using coil springs and telescopic shock absorbers. The front suspension being by double wishbones and the rear suspension having double joint swing axles with camber compensation. This more sophisticated rear suspension was to ensure these cars were less prone to the sudden change of camber problems that can happen on a simple swing axle design. So whereas cars of the twenties and thirties tend to be quite truck like to drive the Mercedes-Benz 540 K is not, despite its weighing almost three tons.

The engine of the 540 K is a 5,410cc overhead valve with a Roots supercharger. Power is rated as 115/180bhp; the 115bhp being the power of the engine whilst being atmospherically aspirated, and the 180bhp being the power when the supercharger is engaged. This is a car that demands intelligent driving. The K stands for “Kompressor” (i.e. supercharger) and for general driving the supercharger is not needed and so is not engaged. However, if the driver does a “pedal to the metal” then in the last movement of the accelerator is a switch that engages the supercharger creating a sensation a bit like that in a “Star Wars” movie when a ship goes into its hyperspace jump. In addition to the pedal controlled switch there is another hand control to pre-engage the supercharger before doing the pedal to the metal jump into hyperspace. Cruising speed for the 540 K is around 85mph (140km/hr).

The Mercedes-Benz 540 K puts together modern automotive technology in a genuine 1930’s motor car. It is a classic era car with an impressive list of modern car features. Things get even better when we start looking at the special Mercedes-Benz 540 K motor cars that were made in the years immediately prior to the outbreak of the Second World War.

The Mercedes-Benz 540 K was made on a longer 129.5″ (3,290mm) wheelbase as standard or a 117.3″ (2,980mm) shorter one. The car we are featuring is custom built on the longer 129.5″ wheelbase chassis although it was made as a luxury two seater. It has the optional five speed gearbox (the 540 K was available with a four speed gearbox or a five speed with a fifth gear overdrive and with synchromesh on the top three gears).

The Mercedes-Benz 540 K Special Roadster in our photographs was custom built by Mercedes-Benz with coachwork by Sindelfinger Karosserie in 1939 and as such is amongst the last, and in fact may be the last special made to exacting customer order. This car was made according to specifications set down by the man who ordered it, Berlin art dealer Rolf Horn. The car has the set back radiator of other custom builds and a mother of pearl dashboard but also has a unique body style with cut down doors and French style almost teardrop shaped fenders. The lines of the car bear witness to the design influence of someone with a highly developed sense of aesthetics.

The car was completed and delivered in 1939 but Rolf Horn did not get to enjoy his new creation for long before Hitler’s invasion of Poland began the Second World War and although there was a period known as “The Phony War” after Britain declared war on Germany nonetheless the real fighting began and Rolf Horn had to put his 540 K into storage and hope he would be able to enjoy it once the hostilities were over. Unfortunately for him that proved not to be the case and the car remained in storage up on blocks until it was discovered in the now Soviet controlled East Berlin in 1949. It was an impressive prestige car suitable for Soviet diplomats and it was put to that use until the Soviet ZIL cars became “de rigueur” for Soviet diplomatic use.

Not being required for diplomatic duty any more the car was sent to Moscow in the heartland of a Soviet Union where Nikita Khrushchev was now in power. Surviving photographs place the 540 K in Moscow in the late fifties.

A Russian gentleman named Arthur Leshtin managed to acquire the car in the late fifties and when a Swedish gentleman named Alf Johansson came to Moscow to live for many years the car was sold to him. He was able to take the car with him back to Sweden when he left the Soviet Union in 1967 and the car was subsequently sold to an American collector named Tom Barrett in around 1977.

The Rolf Horn 540 K was subjected to a very complete restoration in 2011-2012 working with specialist Jim Friswold to ensure every nut and bolt along with all the other parts are correct and restored to near “as new” condition.

This unique car is coming up for sale by RM Sotheby’s at their Arizona sale on 20th January 2017.

You will find the sale page for this car with more details if you click here.

This is an opportunity to acquire one of the most interesting classic era Mercedes-Benz automobiles extant. 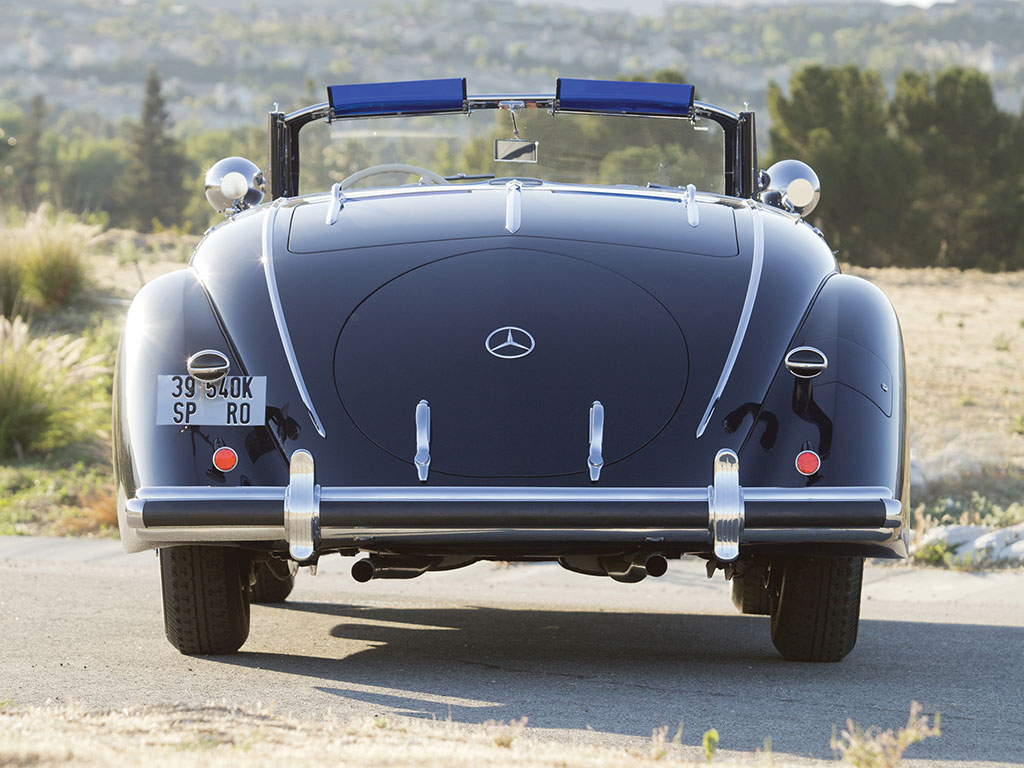