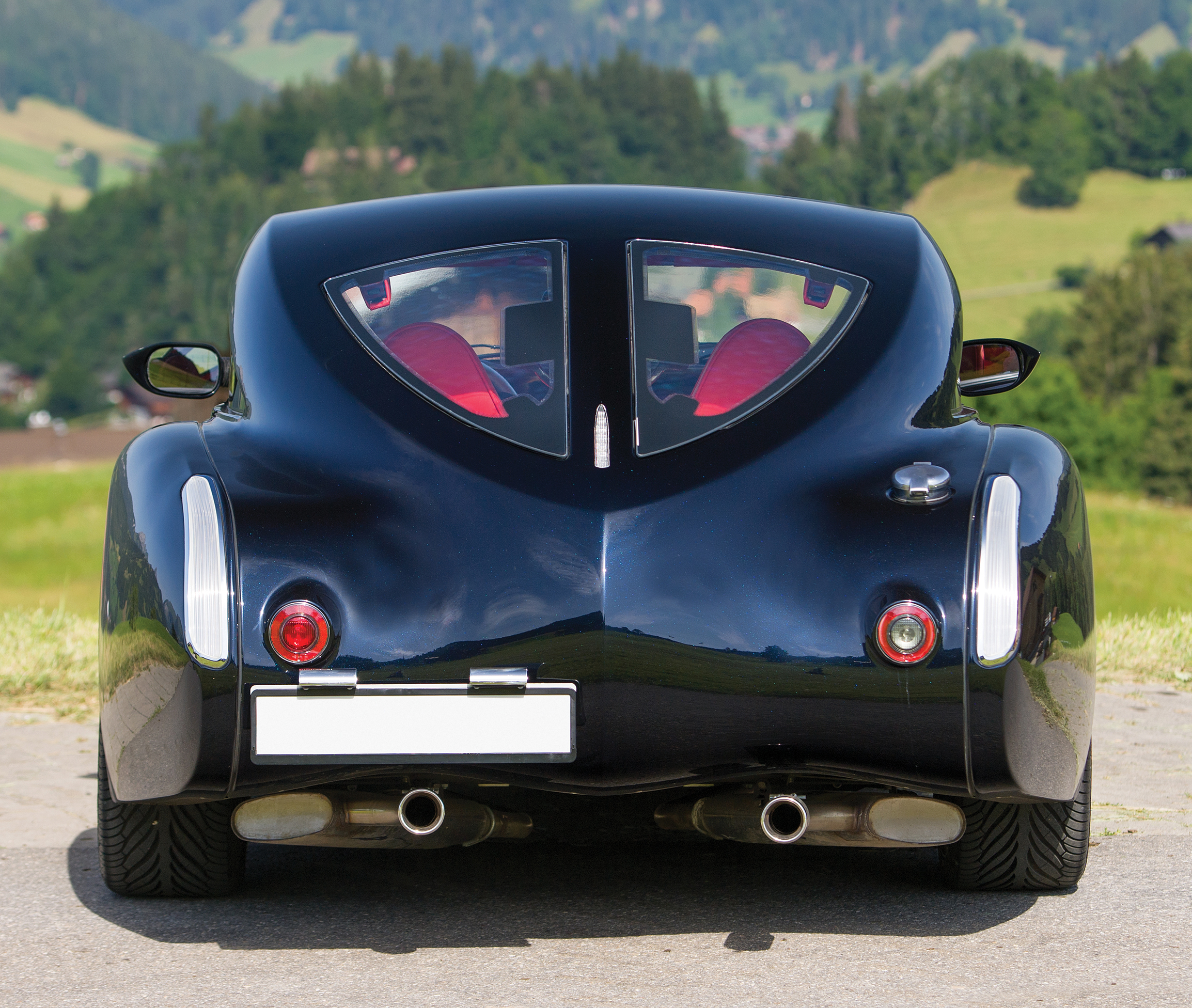 The color scheme and the rear windows almost make this car look like a potential Batmobile. The tail lights are taken from the Lancia Thesis and look perfect on the Morgan.

Made as a one hundred car limited edition based on the Morgan Aero 8 the Aeromax was created around an aluminum monocoque treated and bonded with Gurrit Essex adhesive and riveted with Bollhoff rivets, combined with traditional Morgan ash timber framed aluminum bodywork. Priced at £110,000 which was not quite double the price of the Aero 8 the Aeromax was purchased by people who could afford its Ferrari level price tag but who had the imagination and good taste to see this delightful piece of British automotive art as something that possesses such a unique blend of features that it was worth every penny, despite the fact that the engine and gearbox were from BMW and not from some esoteric highly strung performance shop. Notable people who shelled out their £110,000 to become a proud Aeromax owner included Richard Hammond of Top Gear fame and British comedian and performance car aficionado Rowan Atkinson. 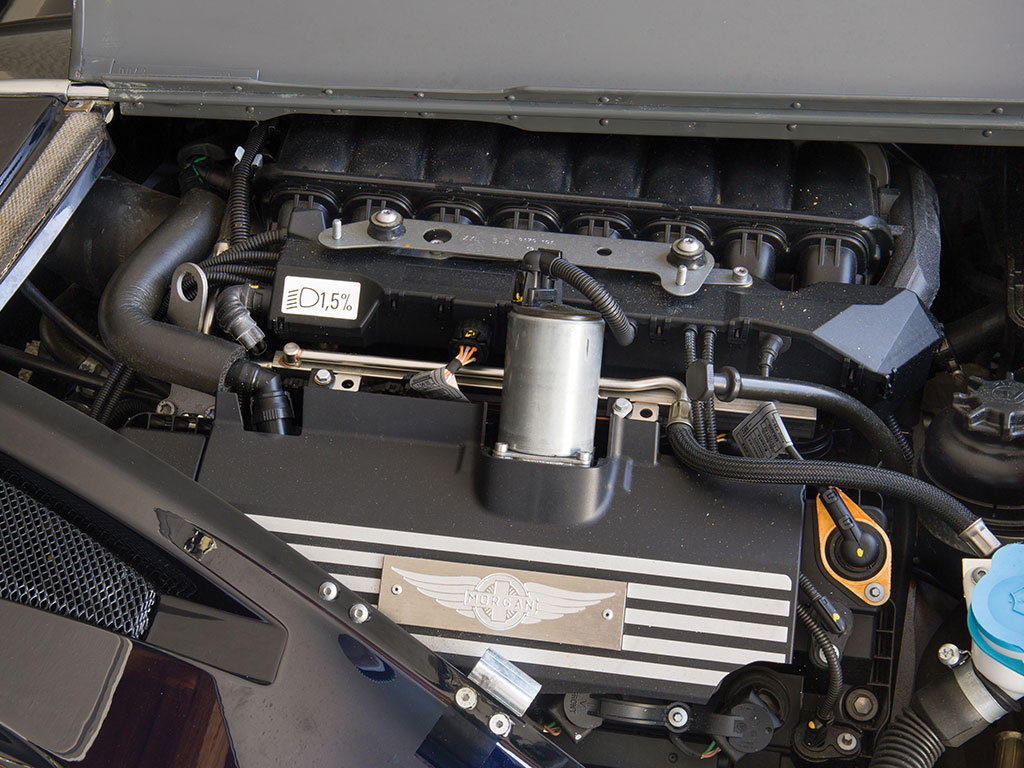 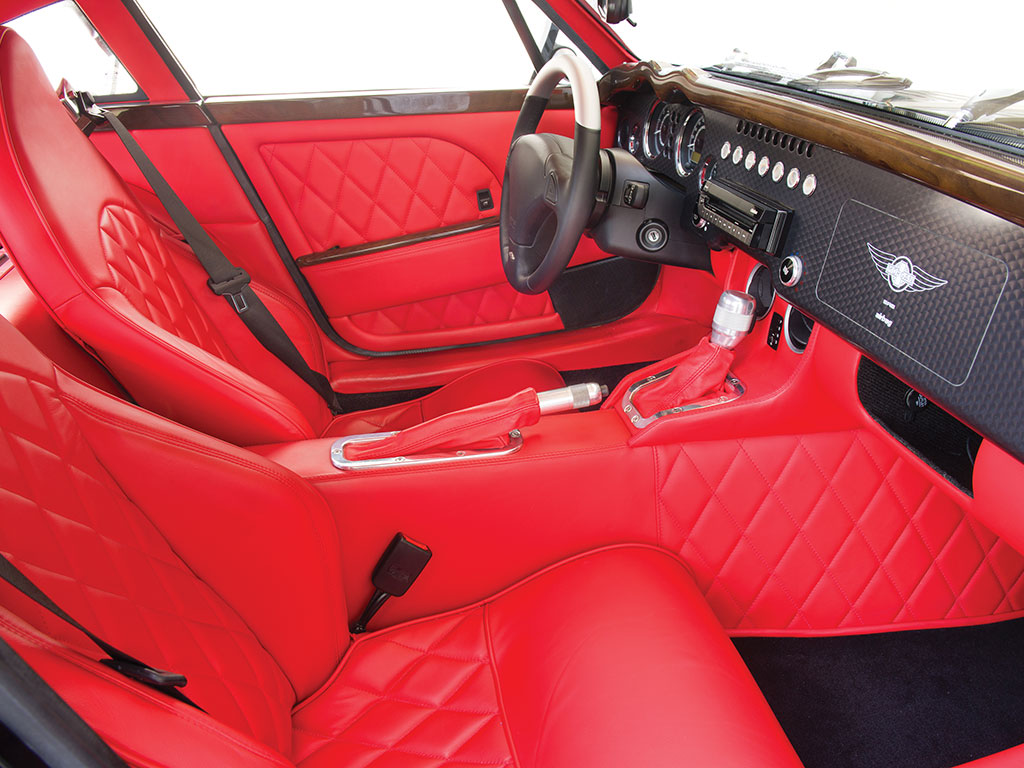 Interior of the AeroMax is luxuriously Morgan with tasteful wood framing and leather upholstery. The steering wheel is from Aston Martin.

Although the Morgan AeroMax has a distinctly 1930’s style about it yet it is built around advanced twenty-first century technology. From monocoque aluminum frame to ash framed aluminum body panels, and hand carved ash dashboard top the car is a blending of thirties bespoke coachwork over the best of modern automotive technology. 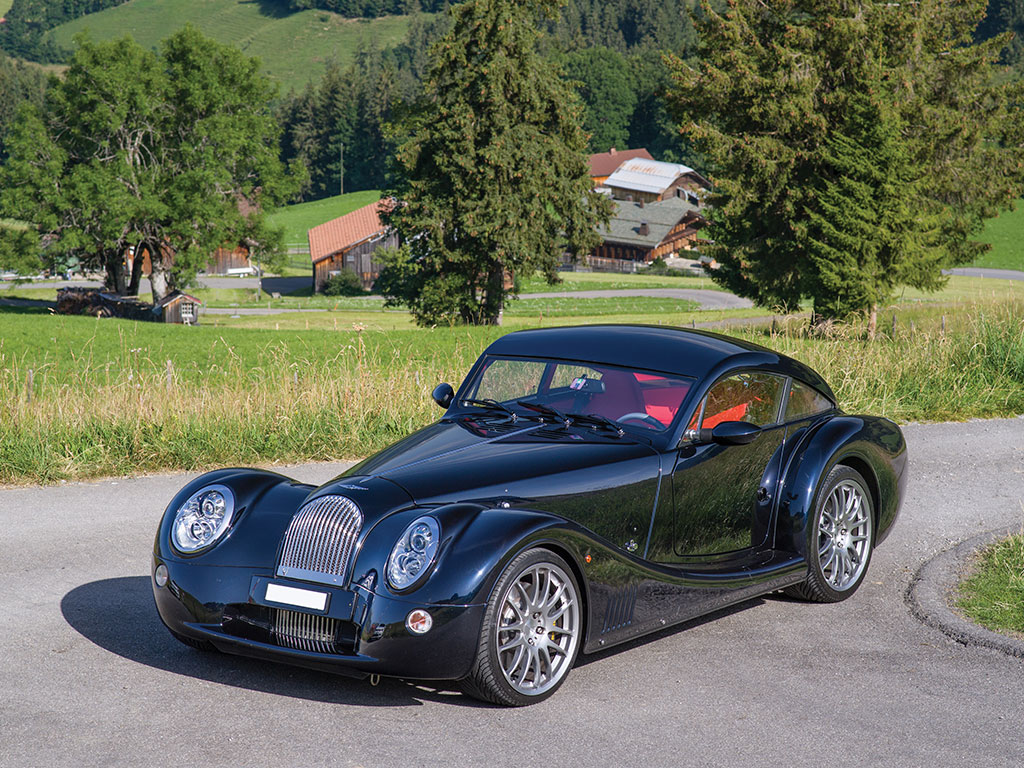 The Morgan AeroMax is now out of production, the one hundred limited edition cars having been built and sold to their respective owners. As these are a fairly rare special edition they do not come up for sale often but the one in our pictures is coming up for sale by RM Sotheby’s at their London auction to be held on 6th September 2017. 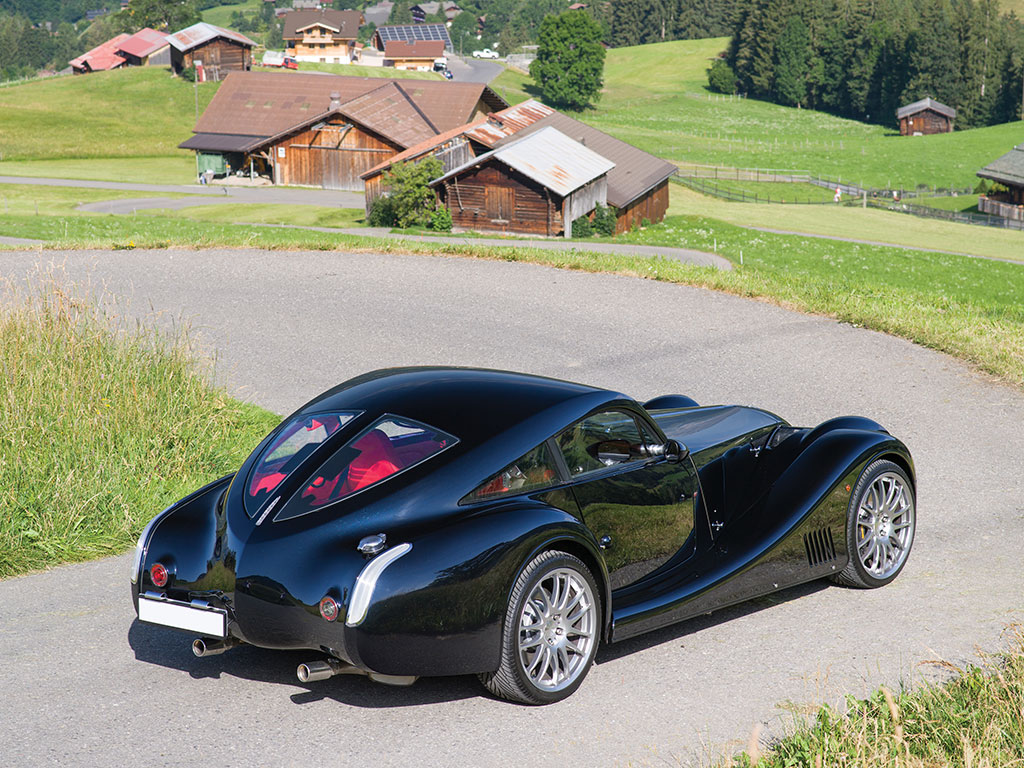 Morgan have managed to make the AeroMax visually compelling from all angles.

This particular car was made for Prince John Radziwill with production beginning on August 30th, 2009. The car is painted in Supersports Zurillic Blue Metallic with Yarwood Kensington Penfold quilted leather upholstery with black carpets. The car’s interior woodwork is in brown velvet wood stain.  This Aeromax was ordered with a number of bespoke options including satellite navigation and an upgraded sound system. The Prince is quite tall and so the car was tailored for him by removing the seat plates and installing the seats directly onto the floor, moving the pedals two centimeters closer to the bulkhead, and not fitting a footrest in the passenger foot well. 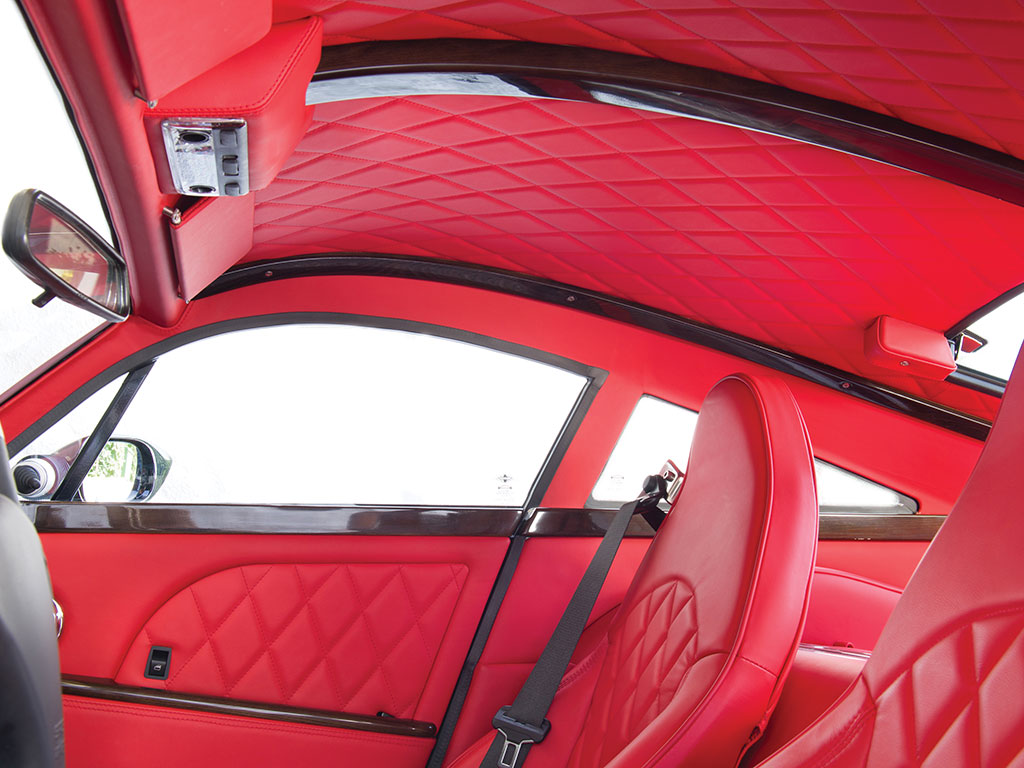 The roof features a stained ash spine that gracefully curves along its length.

This car has been well cared for and used little having just 2,700 km on the odometer. If you are looking for a Morgan AeroMax this presents an opportunity to own one of the most memorable motor cars to emanate from the mavens of Malvern’s workshops. 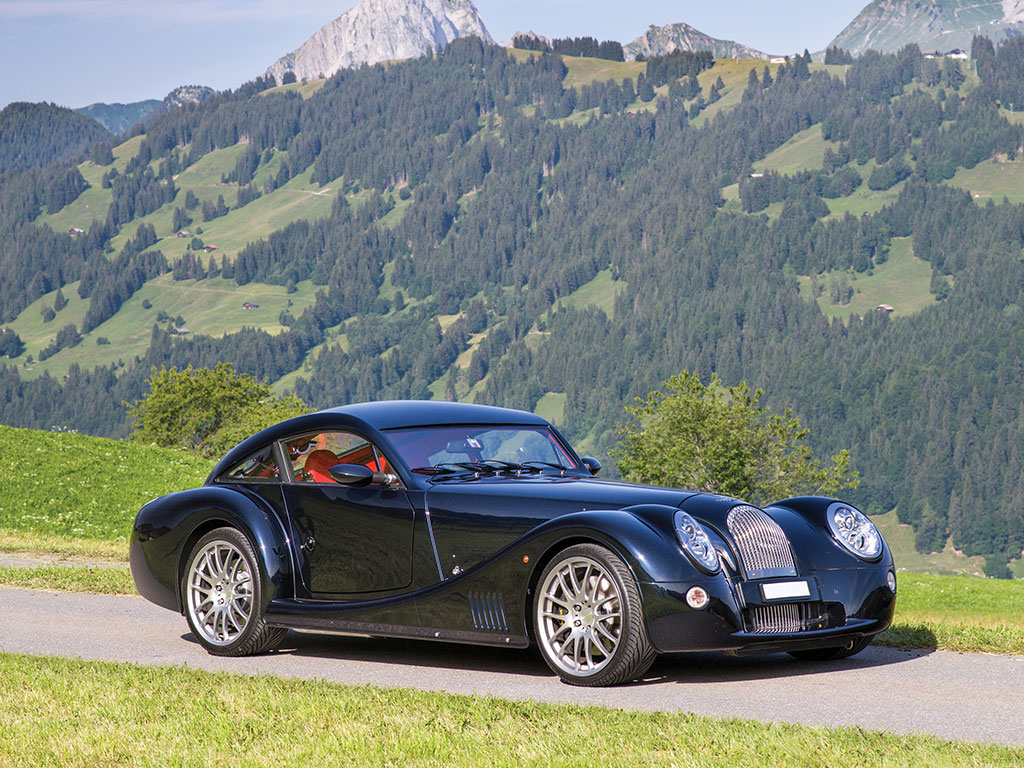