After the end of the war German designer Hans Trippel, who had begun designing amphibious vehicles during the 1930’s, decided to try his hand at creating the first civilian recreational amphibious car. This vehicle was built in a style a bit like the Volkswagen Schwimmwagen, with the engine in the rear driving the rear wheels and also providing power to the propeller. But Hans Trippel’s new vehicle was made with improvements over its wartime predecessor, notably that while the Schwimmwagen required that the rear propeller be manually lowered into the water on Hans Trippel’s new post war design there were twin propellers mounted under the rear of the car that did not need lowering or raising, so nobody needed to get their feet wet. 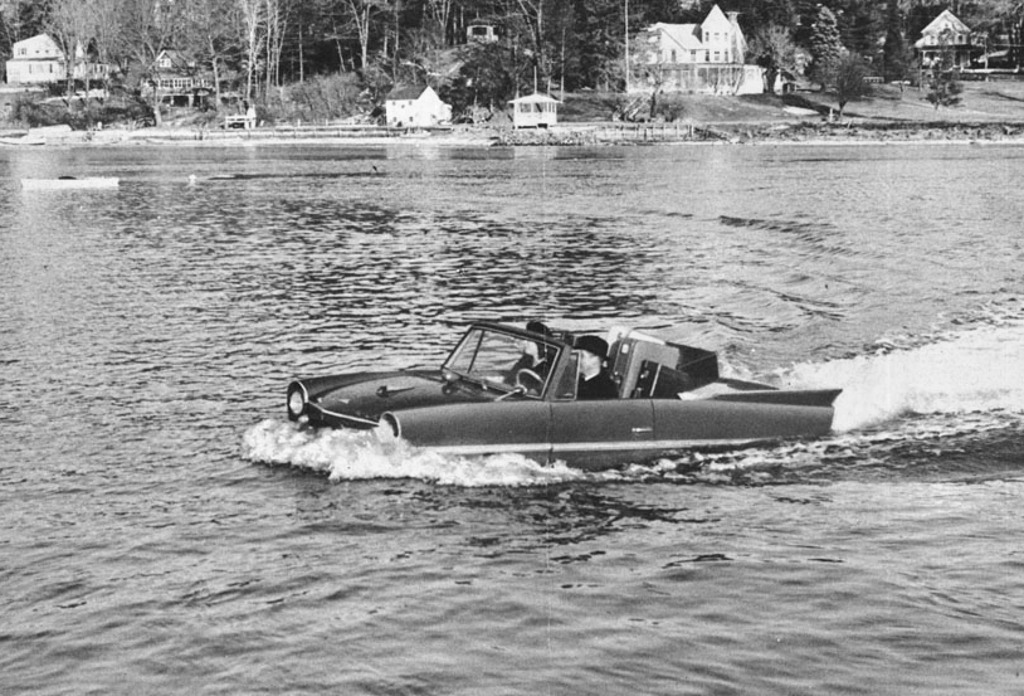 Amphicar in action, picture from an original Amphicar advertisement.

Hans Trippel’s amphibious car was introduced to the world in 1961. It was called the Amphicar and whether it was a success or not depends on whose opinion you read. Suffice to say that the Amphicar was summed up as being “the fastest car in the water and the fastest boat on the highway.” Some loved it, some did not, but as a tribute to the brilliance of the design there is a strong International Amphicar Owners Club that meets regularly to swim their cars and enjoy them.

Those who decided not to love the Amphicar were those who were not impressed by its performance. On the road the Amphicar’s standing to 60 mph time was a leisurely 43 seconds: so it didn’t really accelerate so much as gain momentum: not a car with which to turn up at the local drag strip to take on all comers. Top speed on the road was around 70 mph, and on the water 7 knots: not quite fast enough for water-skiing. Being costly sales of the Amphicar were disappointing and in 1968 when changes were made to US vehicle regulations it became no longer possible to offer it for sale in the USA and so the factory closed and the Amphicar went out of business and into the annals of automotive history.

But the idea for an amphibious sports car and sports boat that was going to be quick enough for water skiing did not disappear but became an interest for New Zealand businessman Alan Gibbs. 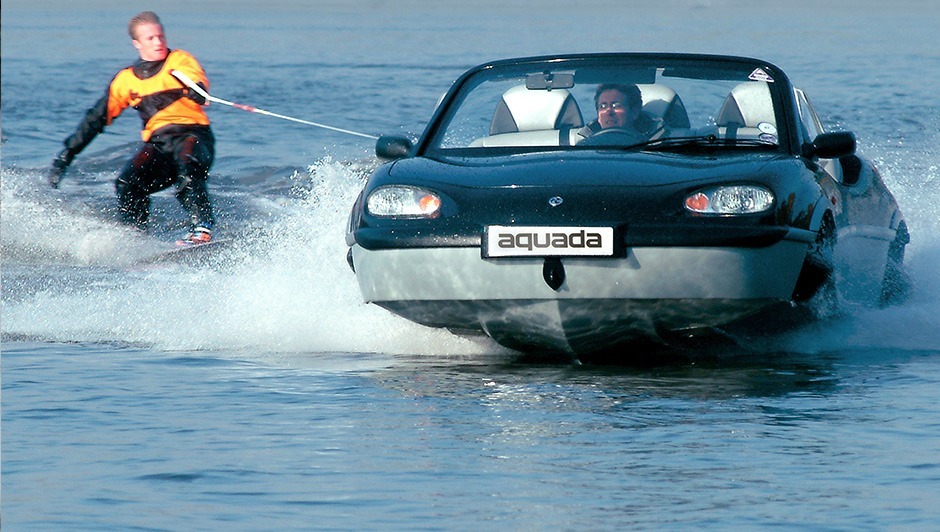 Alan Gibbs and the Aquada

Alan Gibbs interest in motor vehicles goes back to his early years and his first foray into attempting to become a motor manufacturer he undertook in 1965. Gibbs wanted to establish an automotive manufacturing business in New Zealand and was to be called the Anziel Nova. The prototype was created by British design studio Ogle and with involvement from British small car maker Reliant who had expertise in making fiberglass bodied cars. The prototype made its first public appearance in 1967 but Gibbs could not get the necessary cooperation from the New Zealand government at the time and so the project was aborted in 1970.

Gibbs moved on in life and in business and was very successful. He purchased a farm in the north west of New Zealand’s north island which had Kaipara Harbour at its western boundary and became famous for his involvement in art and sculpture at Gibb’s Farm. But the thought of becoming a car maker never went away. When and how the idea to create a high performance amphibious car came to him we don’t know. Perhaps he occasionally watched the British comedy show “Monty Python’s Flying Circus” on television and the line that was frequently repeated as the show moved from sketch to sketch got etched into his mind. That line was “And now for something completely different”. 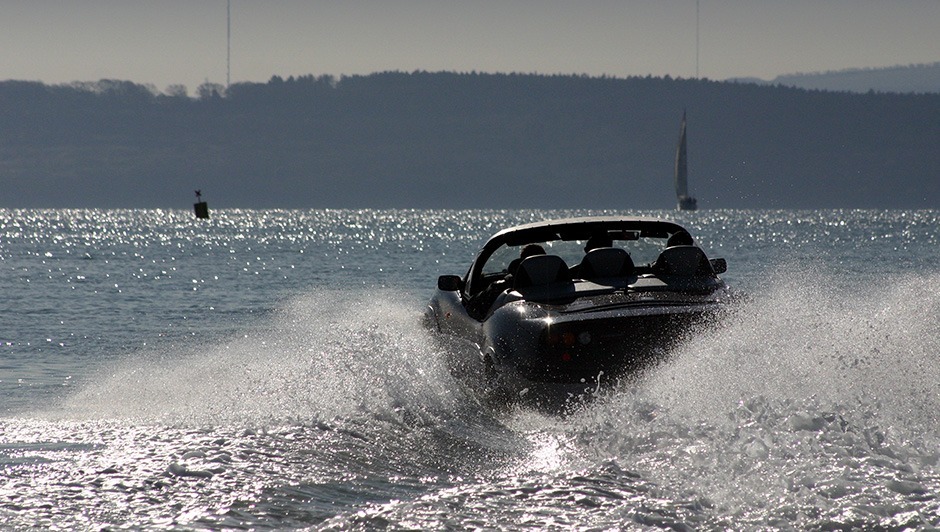 So it was in the last years of the twentieth century that Alan Gibbs mind turned to create a car that would be “something completely different”: an amphibious car that would be at home cruising the streets and waters of Monte Carlo, a car that a Hong Kong businessman could drive from his Repulse Bay home down to the sea and into the water to head out across the East Lamma Channel to Sok Kwu Wan to dine at the Rainbow Seafood Restaurant, a car that could traverse road and water, and provide for some water skiing entertainment also.

Gibbs first expedition in his quest to see if such an amphibian could be created took him to the United States’ center for automotive design, Detroit. Then in the last year of the twentieth century he partnered with a man named Neil Jenkins and relocated his project to Britain, to the town of Nuneaton in Warwickshire. It took just four years to move from design concept to operational prototype and that first Gibbs Aquada made its public debut in September 2003. 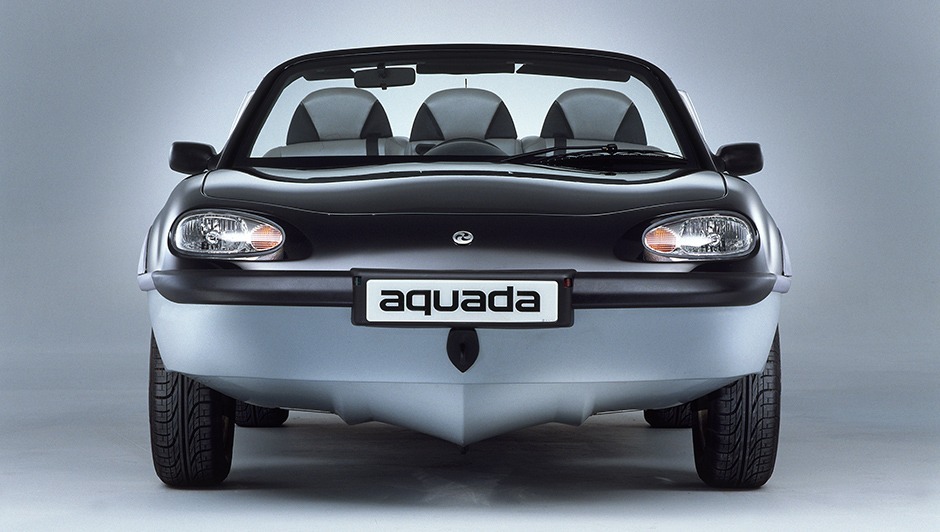 The three seater Gibbs Aquada was powered by a 175 hp 2.5 liter Rover K-series 24 valve V6 engine mounted in the rear of the car. That engine was mated to a transmission that provided power to the vehicle’s rear wheels and/or to a proprietary Gibbs water-jet for propulsion in the water. Water-jets were and are common in New Zealand because they are not only efficient in propelling a boat, but they are also capable of traversing very shallow water.

The steering on land was by a power assisted rack and pinion system while the steering in the water was via the water-jet. The suspension was fully independent with upper and lower “A” arms but the wheels were made retractable by a proprietary hydraulic system so they lift up out of the way rather like the wheels of Doctor Emmet Brown’s DeLorean time machine when it comes back from the future equipped for flying, except the Aquada was built for flying across the water. 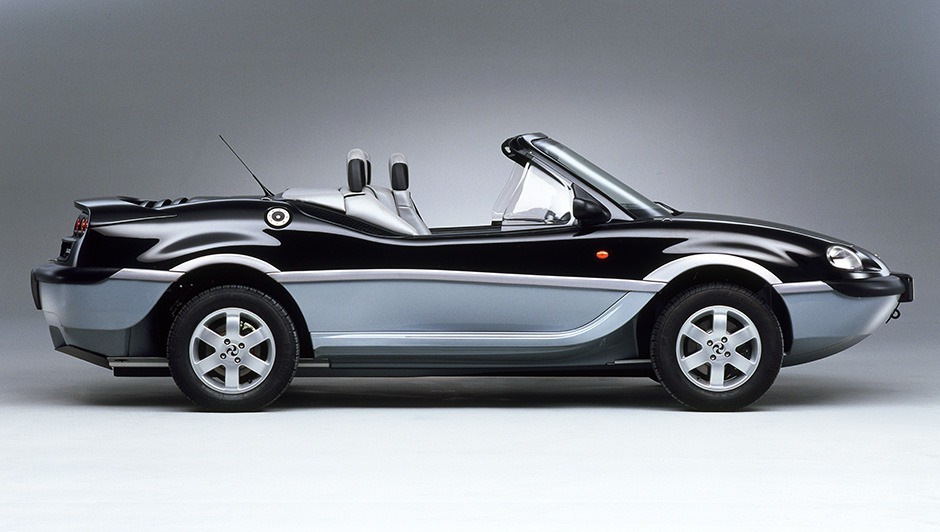 On the road the Aquada’s suspension featured a computer controlled self-leveling system that enabled the driver to adjust the ride height. The car’s approach angle was 19° and its departure angle was 13°. Wheels were 6.5Jx16 with 215/60/R16 tires for the front and  225/60/r16 at the rear. Brakes were servo assisted discs all around and the front brakes were ventilated.

Just like the Amphicar before it the Gibbs Aquada was equipped with lighting systems both for a car and also with marine navigation lights for a boat.

Sensibly the Aquada was not fitted with doors, but with a running board so passengers could step onto the running board and into the car.

The video below courtesy cplai provides a good overview of the brilliance of the Aquada.

The Gibbs Aquada was in limited production between 2003-2004 and it was the first of a number of prototype amphibious vehicles using Gibbs “High Speed Amphibian” technology systems.

And if you’d like to find out more about the creator of the Aquada you’ll find Alan Gibbs and Paul Goldsmith’s book “Serious Fun: The Life and Times of Alan Gibbs” if you click here. 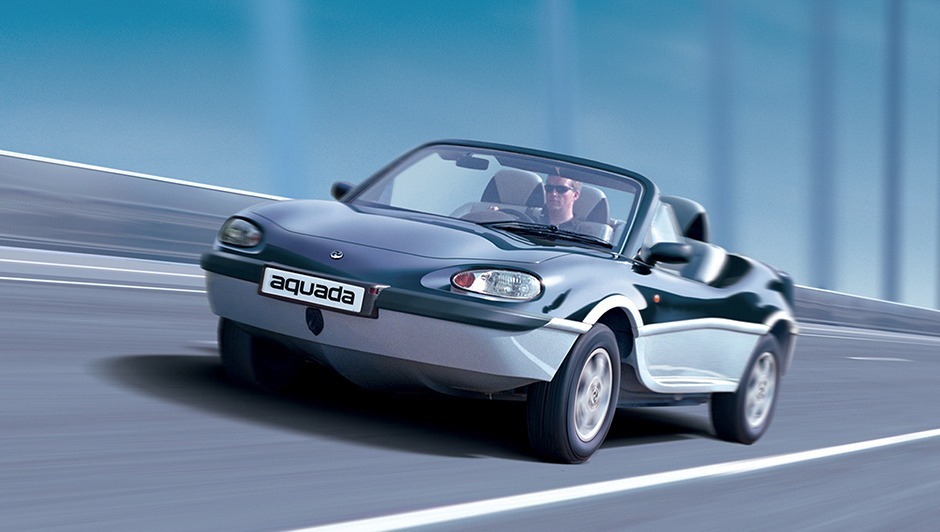