There are some distinct similarities between the Japanese and the British. Both are steeped in tradition, both value high levels of workmanship, and both have had a tendency to latch onto a basic design for something that becomes an iconic symbol of their nation and culture. For the Japanese it was a decision to adopt the two handed slightly curved sabre as their sword and then to technologically and artistically develop it to make it the best in the world. For the British it was the side by side double gun and double rifle that became at once a symbol of gentile sportsmanship, and a symbol of pride in a cultural heritage and an empire that stretched around the globe.

To be in a Japanese sword shop in Japan, sipping green tea and watching the shop owner in his relationships with his customers, and to be in a London bespoke gun and rifle maker’s shop watching the sales people in their relationships with their customers, are very like environments. The tea in the London shop will likely not be green, one will be offered the choice of “the China or the Ceylon?” a reminiscence of empire, but other than that the likeness between the two is quite something. One thing is sure, in the Japanese shop the customers will have come to buy a two handed slightly curved sabre, what we in the west refer to as a “katana”. It will have been meticulously hand made and it will be a thing of an extraordinarily deep beauty. There won’t be lots of different styles of sword in the shop. Just hand crafted Japanese “Daito” (long sword) and “Shoto” (short sword), each one unique. In the British gun shop one will have the choice of a side by side double barrelled gun or rifle, or, a “magazine rifle”, which will be a bolt action, probably Mauser. But the shop’s pride and joy will be in its hand-crafted side by side double barrelled rifles and guns.

Amongst the small number of surviving British gun-makers who exemplify the art of the double rifle and double gun James Purdey and Sons stands out, somewhat like the way the Japanese sword maker Masamune stands out. Amongst the things that make James Purdey and Sons so highly respected in addition to the quality of the rifles and guns they make is their use of the Beesley “self opening” action on their double rifles and guns.

(To see the sale page for the 1938 James Purdey and Sons 300 Holland and Holland double rifle pictured above click here.)

There are a number of “self opening” actions, however, the Beesley action that James Purdey and Sons uses and has refined is one that stands out. The action uses a single “V” spring in each lock which both powers the tumbler, and powers the self opening mechanism of the gun. The action of closing the gun tensions the “V” spring and causes the lower arm of the spring to cock the tumbler. When the trigger is pulled part of the stored energy in the “V” spring is used to fire the gun, and as the tumbler operates tension is transferred to the upper arm of the V spring such that it pushes on a rod and kicker mechanism applying pressure to push the barrels down, i.e. applying pressure to open the gun. Thus if the shooter simply sweeps the locking latch to the side the gun will immediately respond to the spring pressure and spring open. The concept is simple, making one is not. 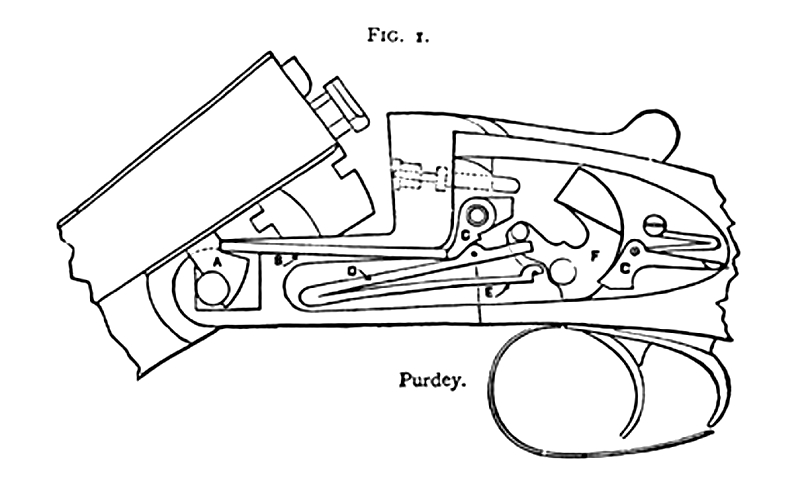 The Purdey/Beesley self opening action. (Picture courtesy of Purdey).

In order for this deceptively simple design to work smoothly and effortlessly every part must be perfectly profiled and fitted. Any error in fabrication will be magnified and result in a gun that is not pleasant to use. However, as hand crafted by Purdey, the refined Beesley self opening action is a “once bitten you’re smitten” experience. Once you’ve had the experience of one other designs are just not going to feel the same.

The self opening mechanism is co-incidentally separate from the ejector mechanism. The ejectors of the Purdey are a modified Wern system using “V” springs on the over centre principle, refined by Purdey over the years to work flawlessly.

The clean rounded shape of the Beesley side-locks presents an uncluttered area for engravers to practice their art and other gun makers progressively moved away from the “leg o’ mutton” shaped side-locks to the clean rounded Beesley/Purdey shape. The Beesley action also opens deeply providing a wide gape convenient for reloading. 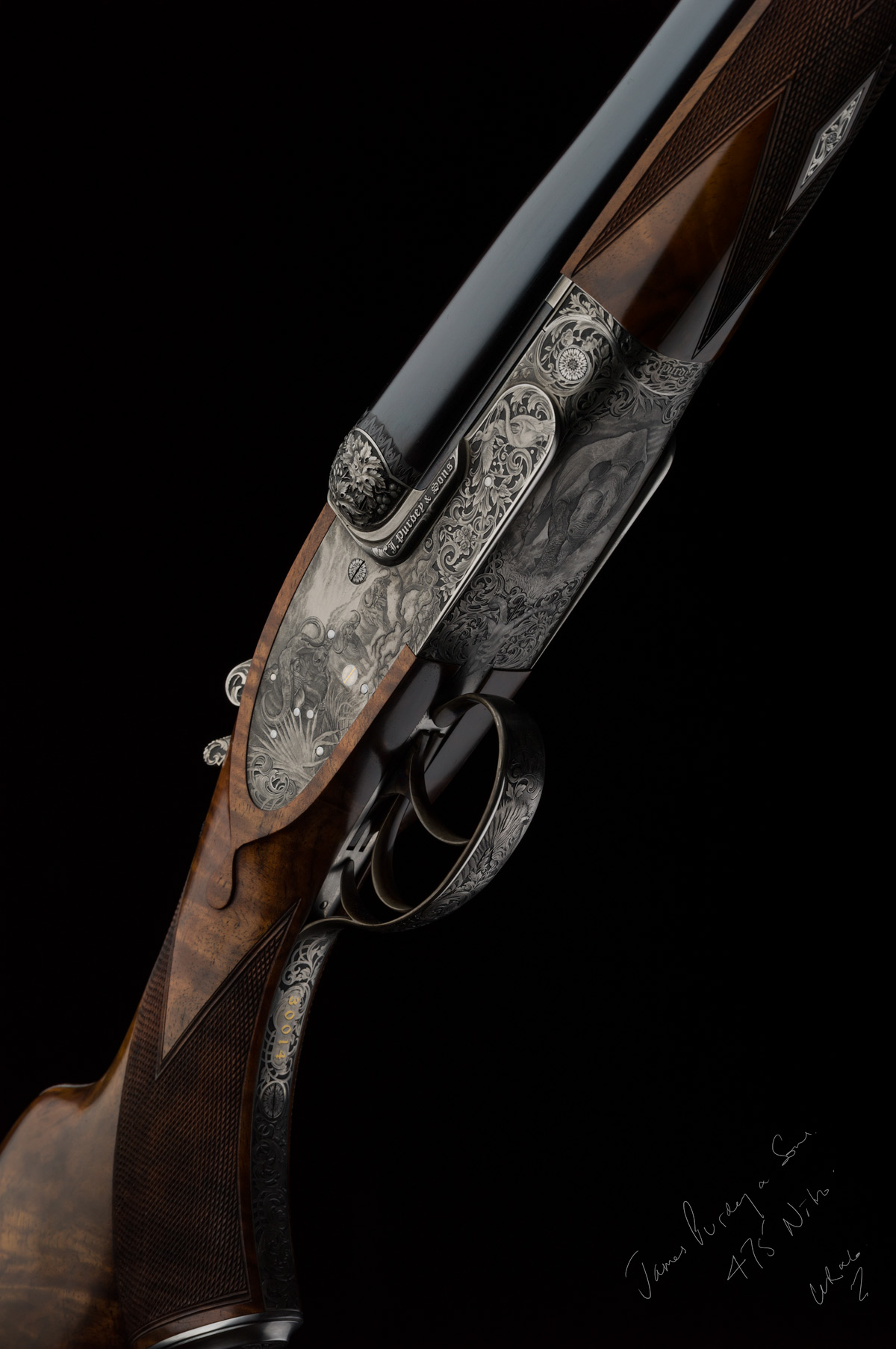 The shape of the Beesley side-lock provides a graceful area for engraving, here seen on a Purdey 475 Nitro Express double rifle. (Picture courtesy of theexplora.com).

Some have criticised the Purdey self opening action as being hard to close. It is true that the action of closing the gun must tension the main-springs and in that process cock the tumblers, and also impart the tension that will later be used to power the self-opening mechanism. So, are they harder to close? The short answer is yes. Is this a disadvantage though? Those who favour the Purdey over more conventional actions say that the gun is not difficult to close, it just requires the right technique, a technique that needs to be practised. They also say that the Purdey has a solid feeling on closing that one misses when using other types. The advantage of the self-opening mechanism is self evident; the thumb of one hand sweeps the top latch and the gun springs open by itself ejecting the fired cartridge(s), at the same time the other hand can be getting new cartridges from the belt or pouch and inserting them into the gun. The advantage of the streamlined re-loading more than makes up for the modest additional effort required to close the gun. 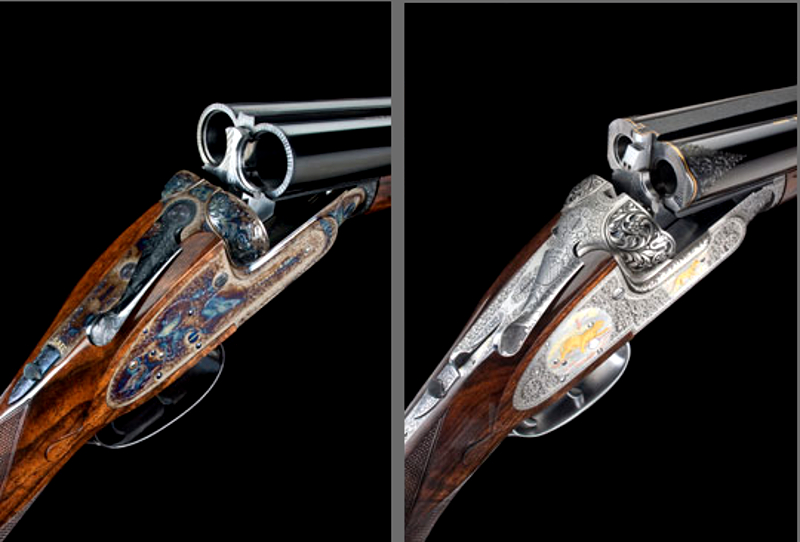 The gape and breech of the Purdey self-opening gun (left) and rifle (right) compared. In both the deepness of the gape and the uncluttered breech can be appreciated. (Picture courtesy of Purdey).

You will find Purdey’s page on their double rifles if you click here.

The late John Taylor said that his ideal “one rifle with which to travel the world” would be a double rifle in 375 Holland and Holland Flanged Magnum with a 2.5x rifle-scope in quick detachable mounts. Nowadays, with the improvements in rifle-scopes we now enjoy, about the only thing in that specification I might change would be to suggest a low powered variable rifle-scope in the 1x-4x or 1.5x-6x range on that double rifle, perhaps with an illuminated reticle such as Schmidt and Bender offer with their “Flashdot” technology. Certainly the decision to make that double rifle a Purdey self-opening double rifle would be one that couldn’t be improved on.

You will find Purdey’s page on their double shotguns if you click here.

A Purdey self-opening double rifle at top and a self-opening gun below. The rifle and gun pictured were made for Purdey’s bicentennial celebration. (Picture courtesy of Purdey).

The British double rifle and gun are as iconic for Britain as the Japanese sword is for Japan, and the Aston Martin DB5 is for James Bond. A British double rifle even features in “Skyfall”, although its not a Purdey; and amongst the British makers of double rifles and guns James Purdey and Sons of Mayfair make some of if not the best examples to be found on planet earth. 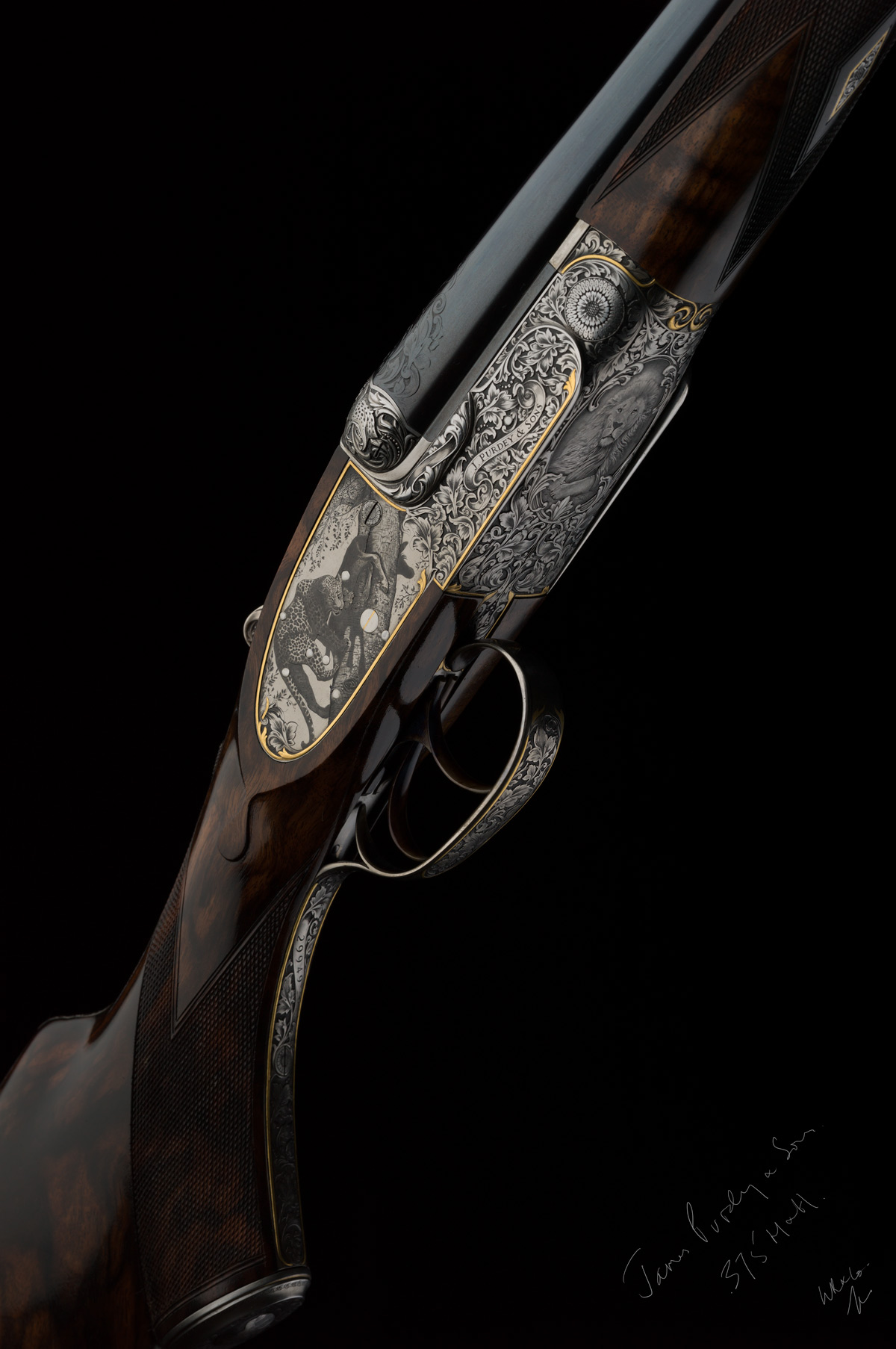