The Webley Fosbery revolver is one of the most interesting handguns ever created. Favored by First World War airmen for whom being able to shoot accurately at an enemy with one hand whilst still piloting your bi-plane with the other was a daily necessity; and for whom not having hot spent cartridge cases ejecting into your face was a much appreciated feature. The Webley Fosbery was an automatic revolver complete with a safety catch. The trigger was single action excellent and the cartridges were not ejected until the user opened the action and ejected them. Hence Britain’s World War I flying aces loved it.

The Webley Fosbery was invented by Colonel George Vincent Fosbury VC who, as a soldier awarded Britain’s highest award for bravery, the Victoria Cross, understood the practical needs of a military officer for his weaponry. He created his automatic revolver design in the 1890’s and it quickly proved its superiority at the Bisley shooting competitions in Britain where its ability to deliver accurate rapid fire shots became much admired. So at the turn of the twentieth century the Webley Fosbery became a revolver of choice for British officers who preferred it to the standard double action designs.

The event that rendered the Webley Fosbery obsolete was the First World War. No revolver, including the Webley Fosbery, withstood the mud and filth of the trenches. The one arena in which the Webley Fosbery did prove itself however was in the hands of the airmen where it was not subject to the clogging mud and was able to perform just as Colonel Colonel George Vincent Fosbury VC had intended.

The Webley Fosbery revolver was made in two calibers; the British .455 Webley which was the standard British service revolver cartridge, and the newer .38ACP which the British called the “.38 Automatic”. The .455 Webley chambered revolver held six cartridges whilst the .38ACP held eight and was reloaded by use of moon clips as you will see in the illustration below.

We should note here that the .38ACP is not the same cartridge as the .380ACP, the two are completely different. The .38ACP was designed by American John Moses Browning for his 1897 prototype automatic pistol and then used for his design the Colt M1900. This cartridge was the parent of the later .38 Super but although the cartridge cases are identical the .38 Super is loaded to much higher pressures and velocities. The .38ACP/”.38 Automatic” is of about the same power as the 9mm Parabellum as used in the Luger pistol.

The Webley Fosbery automatic revolver in our pictures was made by Webley and sold wholesale on September 19, 1903 to the Army & Navy Cooperative Stores Ltd. of London. The Army & Navy Stores then sold the revolver to Major Campbell of the Indian Army on February 16, 1904. Interestingly Major Campbell did not opt to have a revolver in the standard British service caliber but instead chose the .38 ACP version which afforded him two extra shots. Major Campbell may well have believed that he might just be going into a situation where those two extra shots would prove useful.

When he purchased this revolver in 1904 Major Campbell was the commanding officer of the 40th Pathans infantry regiment and with them he participated in the December 1903-September 1904 Younghusband military expedition to Sikkim and Tibet. This military expedition was deemed necessary by the British because they feared that Imperial Russia was seeking to obtain influence there. Major Campbell’s 40th Pathans took part in the march to  Lhase in Tibet in August 1904 which led to the the 13th Dalai Lama fleeing to China to escape the British. This revolver may have been taken on that expedition by Major Campbell.

This rare .38 Automatic Webley Fosbery is coming up for auction by Rock Island Auction on May 5th, 2017.

Rock Island Auction describe the condition of this revolver as follows: “The frame has “WEBLEY FOSBERY” and the W&S winged bullet logo followed by “38 AUTOMATIC” on the left side and an overstruck serial number on the right side (“7336” over “1126” believed to be a factory error; factory letter has serial number “1126”). The barrel is marked “ARMY & NAVY CSL.” The leather flap holster is unmarked. Very fine. The revolver retains 80% original blue finish with the balance thinning to a gray. The grips are very good with a couple missing minor chips, some minor pressure dents and scratches and some wear in the checkering. Mechanically excellent. The holster is very good showing minor flex wear and overall tight stitching. A rare opportunity to acquire a Webley Fosbery self-cocking revolver in scarce .38 ACP documented to being purchased by a British Indian Army Officer just before participating in the Younghusband Expedition to Tibet.”

This is an opportunity to obtain one of these very rare Webley Fosberys in .38 Automatic and to obtain one with a documented historical significance.

As a bonus this is a revolver that could be fired and used because .38 ACP ammunition can be obtained and/or reloaded. The Hornady Handbook of Cartridge Reloading 9th Edition lists it on pages 777-778. 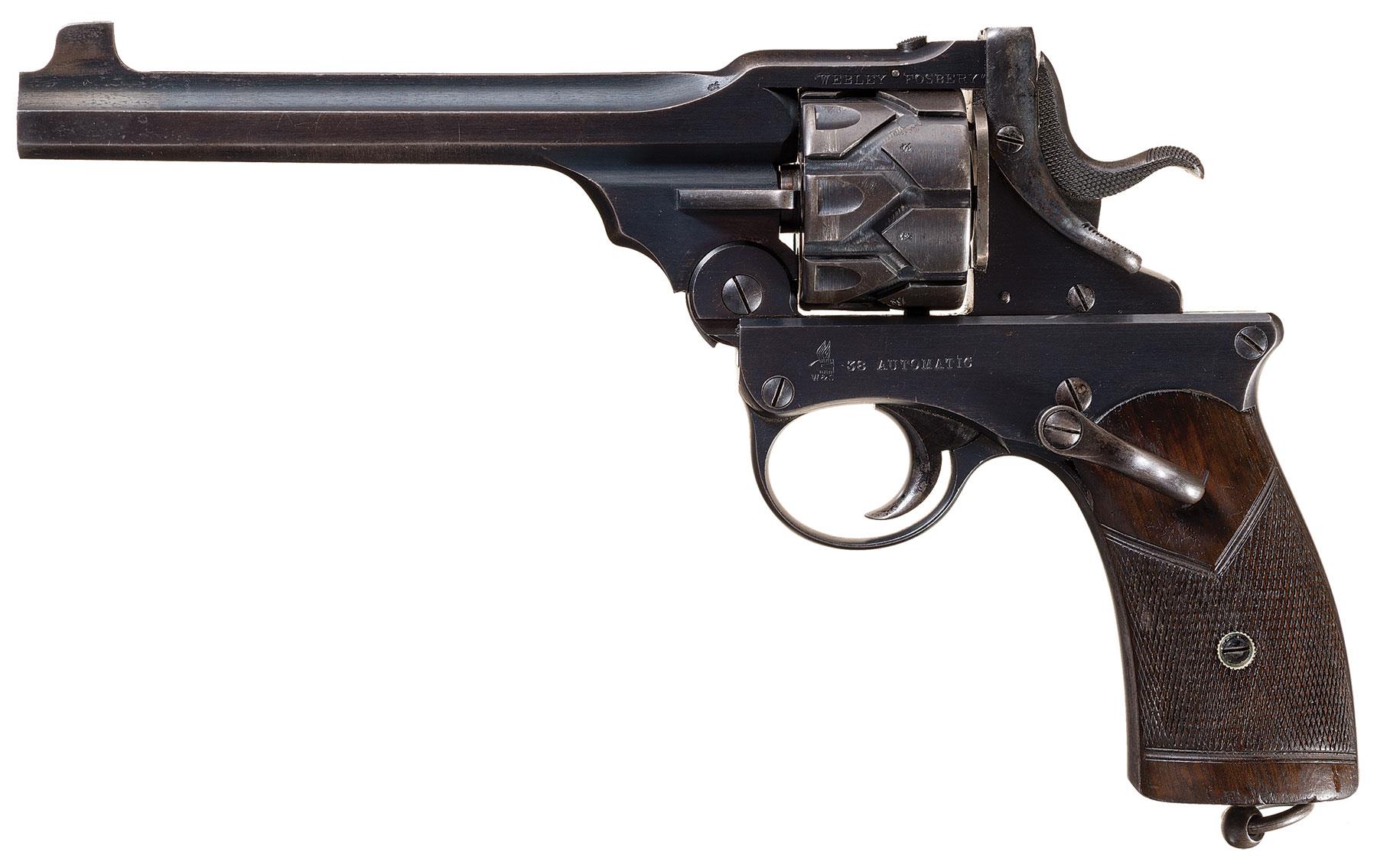 On Any Sunday – Original Movie Poster