I was casually looking through the 2017 RWS Hunting Ammunition catalog recently thinking about what I might like to try in my .300 Winchester Magnum sometime, and whilst looking at the data sheets I noticed a couple of loadings listed as suitable for buffalo. These were the 180grain UNI Classic and the 165grain HIT (which is a nickel plated solid copper expanding bullet with a plastic tip). Now I must admit that my first thought was that, yes, the .300 Winchester Magnum is a capable “all rounder”, but would I go after buffalo with it? Then I thought back and considered that many elephant hunters of old shot elephant and buffalo with much smaller and less capable cartridges than the .300 Winchester Magnum; and that one of the popular calibers used for elephant and African buffalo was the .318 Westley Richards “Accelerated Express”. The .318 Westley Richards Accelerated Express came in a variety of bullet styles to suit plains game up to elephant. Note the stripper clips; these rifles were built on military style Mauser 98 actions and the stripper clips were used for speedy reloading. (Picture courtesy theexplora.com).

Despite its nomenclature the .318 Westley Richards used a .330″ diameter bullet (i.e. bore size was .318″ and groove .330″) and loadings were either a 180grain at 2,700fps or a 250grain at 2,400fps. What made these loadings elephant killers was their combination of a bullet with high sectional density and sturdy construction combined with relatively high velocities. The effectiveness of course depended on the hunter using brain shots simply because there isn’t sufficient power in this caliber to reliably use a heart/lung shot on something the size or toughness of a buffalo or elephant. 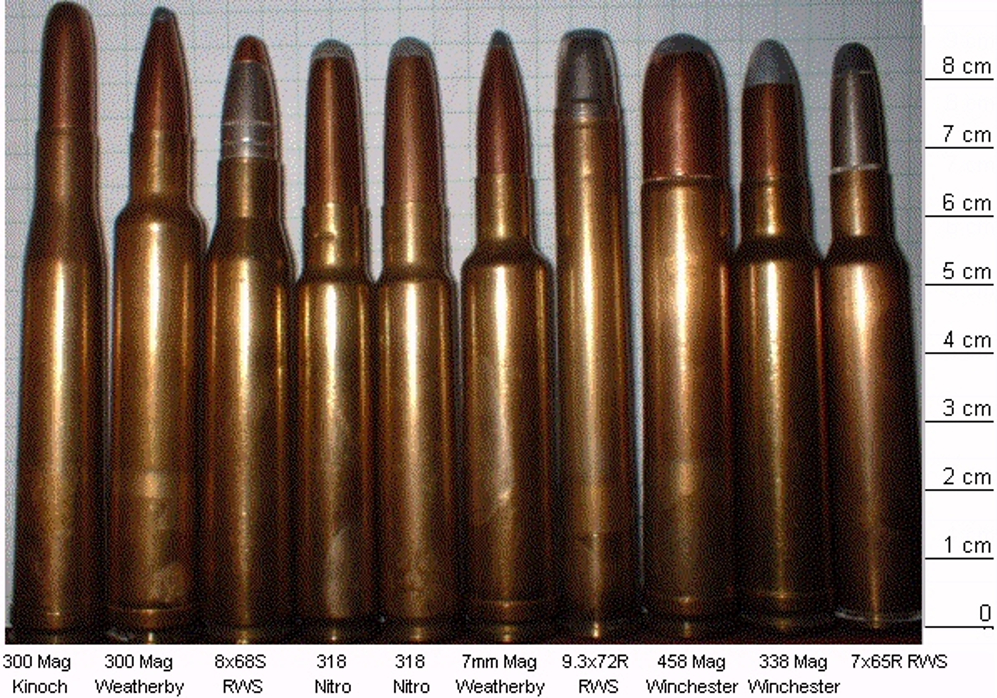 The .318 Westley Richards Accelerated Express is not a big cartridge for its power. In this line-up it is labeled “.318 Nitro”. (Picture courtesy Wikipedia).

The .318 Westley Richards Accelerated Express is not an easy cartridge to get shooting but ammunition and bullets are available from Midway USA at time of writing. The Westley Richards rifles are very nicely made examples of British rifle making and they are well worth having.

There is a nice looking original Westley Richards full stock carbine in .318 Accelerated Express coming up for sale by Rock Island Auction on May 6th, 2017 so if you have a penchant for top shelf British bolt action magazine rifles this represents and opportunity to acquire one. The near full length stock is a bit unusual and this rifle looks to be a fairly light and quick handling piece.

The condition is described as: “Very fine overall as refinished with 98% plus of the blue finish remaining, minor oxidation/pitting at the muzzle, and some minor handling and storage marks. The refinished stock has crisp freshened checkering, glossy varnish, a seam 1 5/8 inches from the butt, and some slight handling and storage marks. It is mechanically excellent. The case is very good with moderate storage wear and an absent lid plaque.”