Not everyone is a perfectionist but some have perfectionist tendencies. The Japanese as a nation tend to be perfectionists which is why their camera optics and their swords are second to none. Likewise the Germans are known for attention to detail and quality control. Whilst I was living in China many years ago I got to know a German quality control engineer who was in charge of quality control for a number of Chinese factories. The mainland Chinese engineers, managers and workers did not share his German passion for quality so he was having a bit of a difficult time. Persuading workers who are being paid the equivalent of USD$100 per month to seek perfection was just not going to work. He did his level best to make it happen and he did manage to ensure that only decent quality products got his German company’s brand on them. 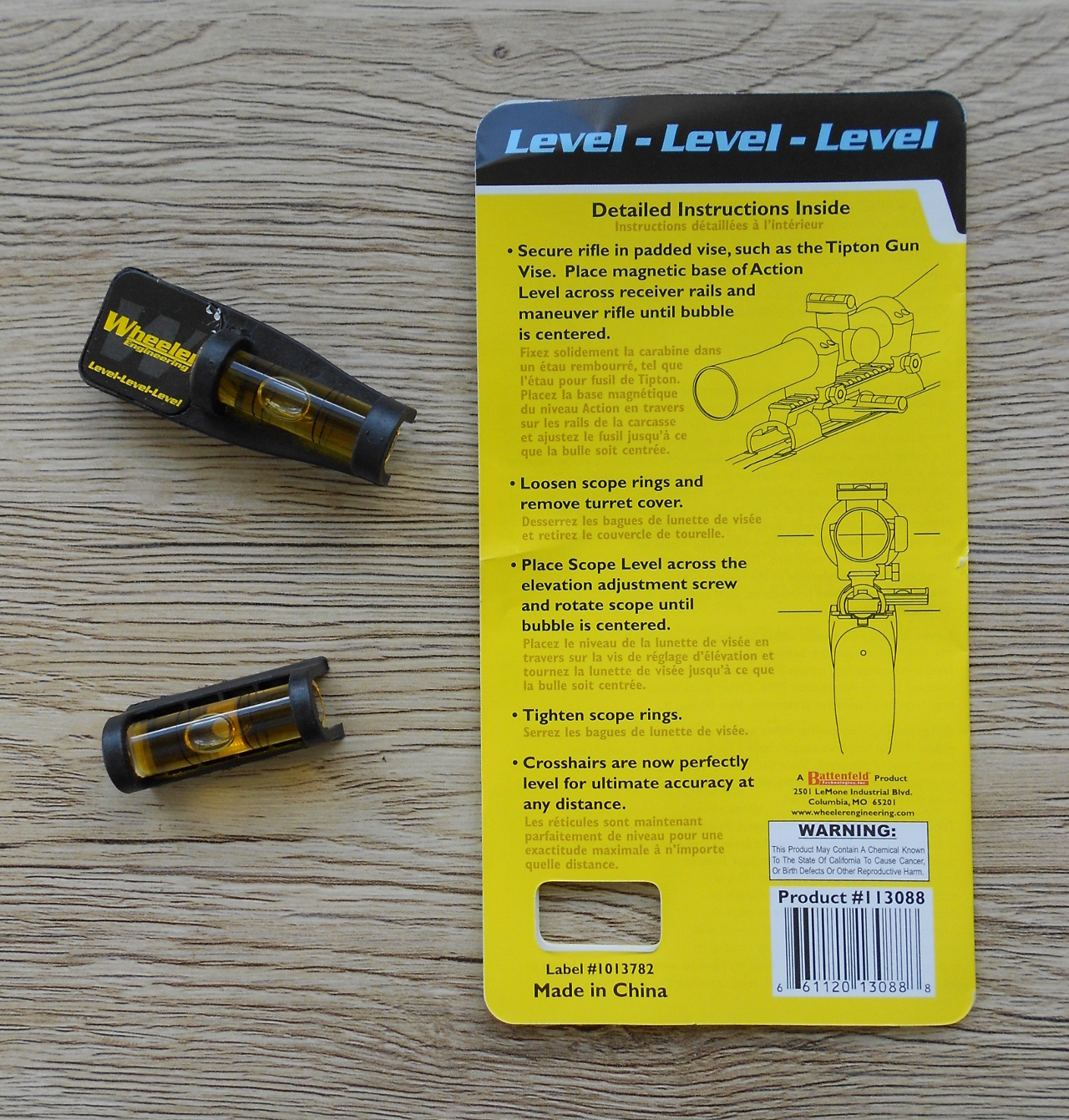 When it comes to mounting a rifle-scope most shooters will quite happily undertake the task themselves. Some do the cheapest and lowest effort mounting job they can whilst others seek to do as perfect a job as they can.

The key elements in ensuring the rifle user will have the best possible experience are to get the rifle-scope height and eye relief correct for him/her, and to ensure that the rifle-scope is as near perfectly level as possible. If those key items are not done well it really won’t matter how solidly the rifle-scope is mounted it will always feel and look wrong. 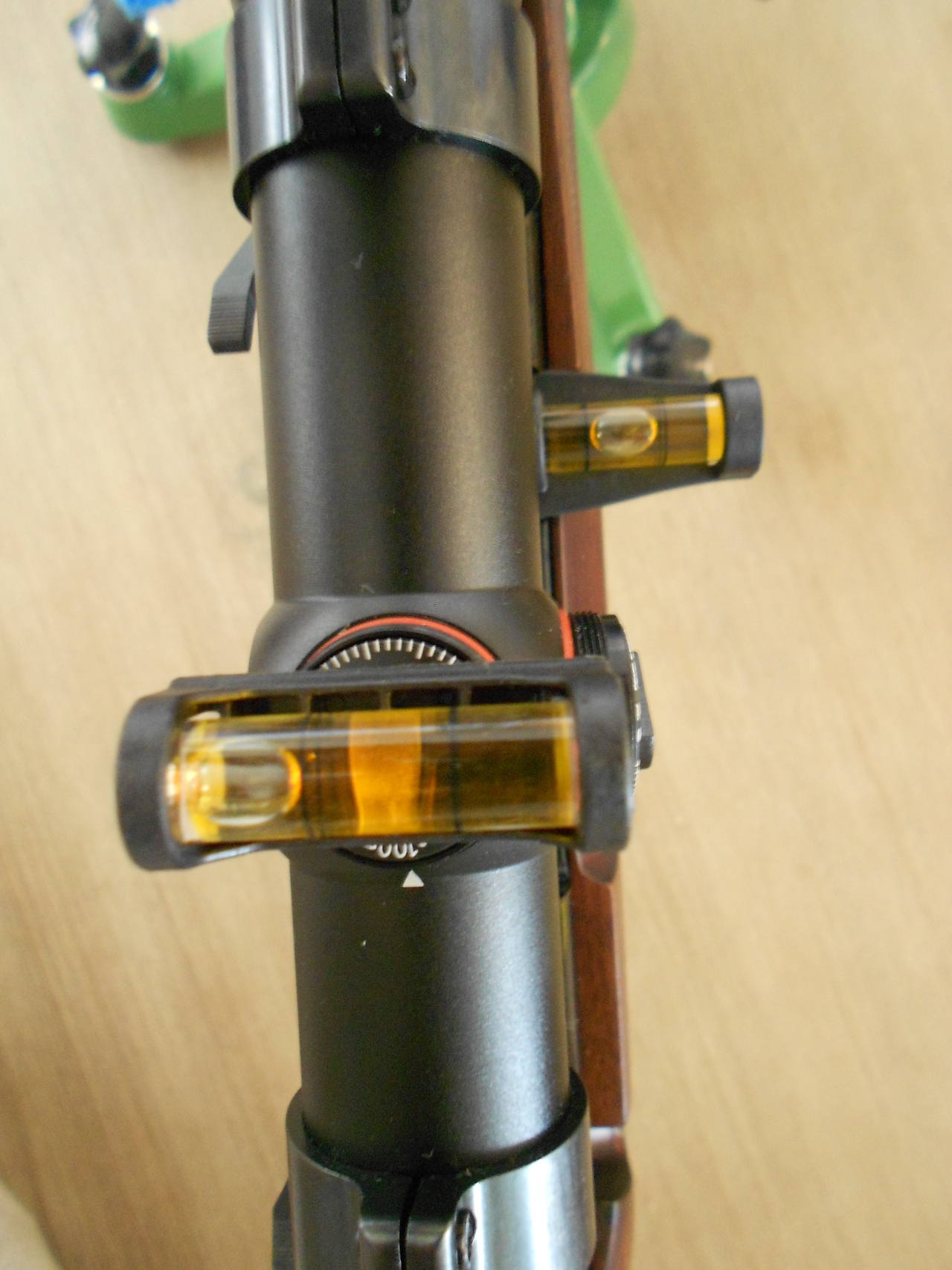 The Wheeler Engineering Level-Level-Level is a nicely designed and inexpensive tool to ensure you mount rifle-scopes level. The kit comprises two spirit levels. One spirit level is made to magnetically cling to the action rails of Mauser 98/Winchester Model 70 and other similar actions and it enables us to set the rifle level as measured on the action rails. I don’t know of any other tool that allows that to be done so easily. 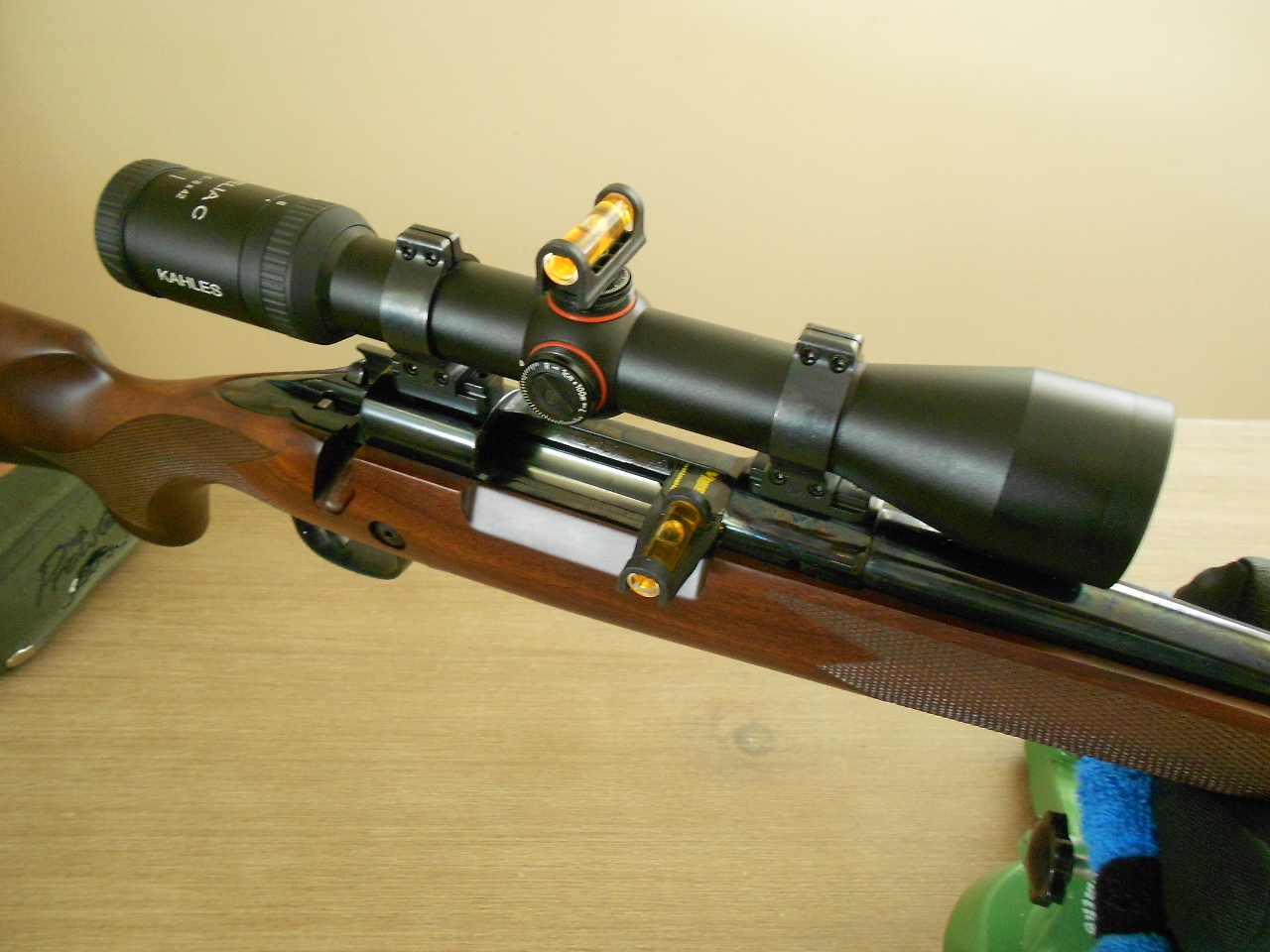 What I’ve described above is how the Wheeler Level-Level-Level is intended to work. There is however one additional step that I recommend. On a top quality rifle-scope such as the Kahles in the pictures we can expect that the scope’s reticle will be level in the turret. Occasionally though we may find ourselves with a rifle-scope whose reticle is not perfectly level with the adjustment turret. To check this set the rifle and rifle-scope to be perfectly level using the Wheeler Level-Level-Level and have the rifle-scope aimed at something you know is perfectly vertical. A plumb line is best but you may find a door frame or window frame that when you check it is perfectly vertical. 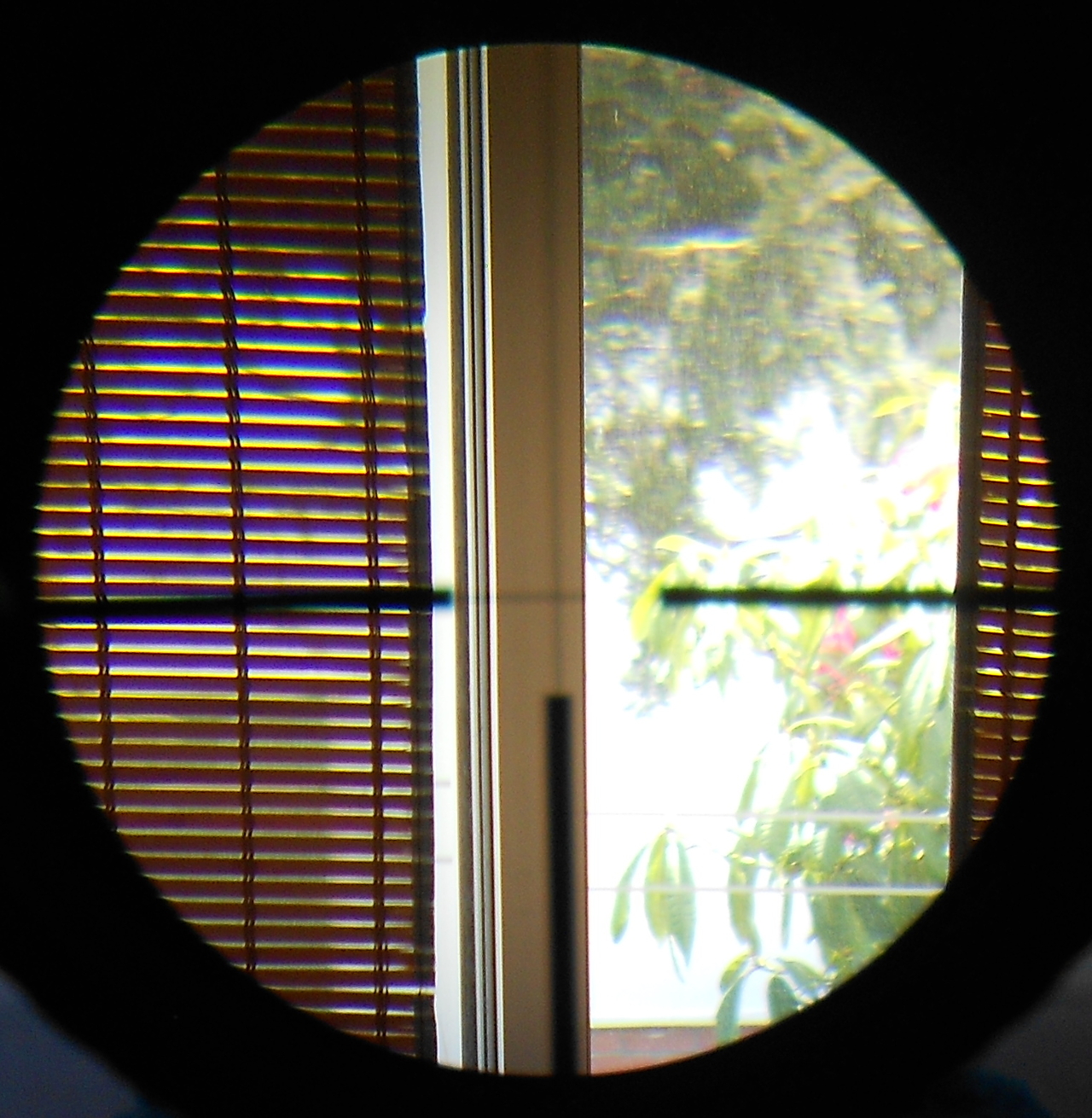 With the rifle and rifle-scope perfectly level look though the scope and check the vertical cross-hair against a plumb-line or something like a window frame you have checked is perfectly vertical.

If all three things match up then you have a rifle-scope that is as perfectly aligned with the rifle’s barreled action as you can get. If you find that the rifle-scope’s reticle is not perfectly level with the adjustment dials then you are armed with that knowledge and you can do the best compromise alignment possible.

The Wheeler Engineering Level-Level-Level is an inexpensive little tool that is a great aid when mounting rifle-scopes. The action spirit level is designed to work on bolt actions that have two front locking lugs such as the Remington, Winchester Model 70, and the Mauser ’98 and similar. I haven’t had the chance to try this device on a bolt action with a 60° bolt lift such as the Weatherby. The main criteria is that the rifle action has two level action rails that the Wheeler Level-Level-Level can fit on and magnetically stick to.

The Wheeler Engineering Level-Level-Level is an inexpensive little tool that works beautifully. You can find it at the merchants listed below:- 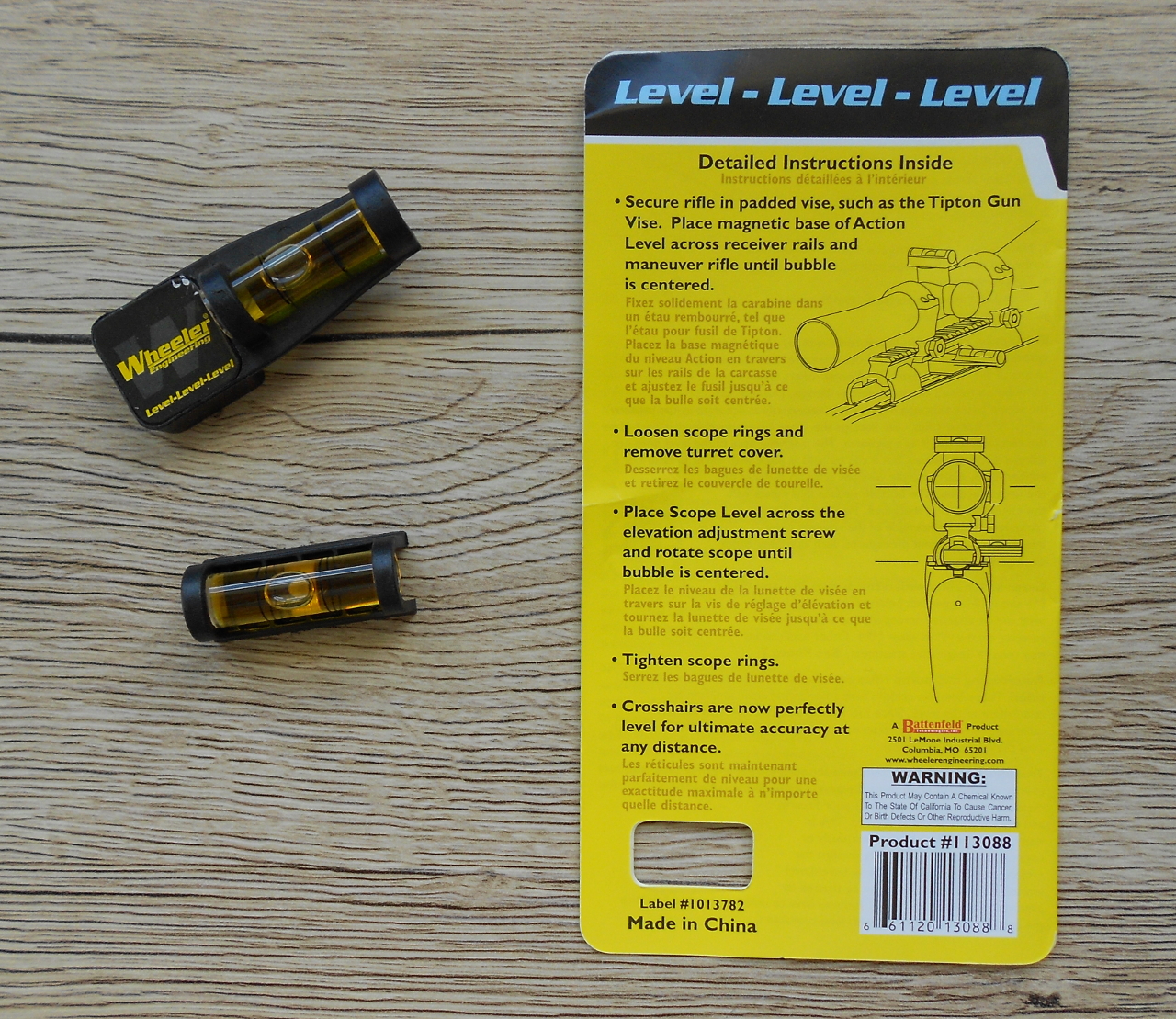