America’s Service Pistol Could Have Been the Luger

The turn of the twentieth century was a time when self-loading pistols were first appearing and looked to be the way of the future. This was also the period when black powder was being replaced by nitro powders which produced higher velocities and permitted the use of smaller bore sizes in military rifles, such as the 30-03 and its successor the 30-06 Springfield. As a result this was a period when military organizations were trying to evaluate not only the possible migration to self-loading pistols but also the new smaller bore cartridges they were made for.

After some promising testing by the American Springfield Armory the U.S. Board of Ordnance purchased 1,000 Luger Model 1900 pistols chambered for the .30 Luger (7.65x21mm) cartridge and fitted with 4¾” barrels on April 16th, 1901. These pistols were issued to each troop of US Cavalry, to the light artillery, and to officers of the West Point military Academy for testing. All these pistols were marked with an American Eagle crest on the action receiver ring and also had proof marks that resembled US ordnance marks.

With their natural pointability and “in the hand” balance no doubt these pistols demonstrated great potential. Georg Luger’s pistol with its 55° grip angle was and still is one of the most ergonomically excellent handguns ever made and Elmer Keith was one who appreciated their handling qualities and accuracy. The feedback from those who tried the M1900 Lugers seemed positive enough for the Army to purchase another 50 Model 1902 Lugers with shorter 4″ barrels also chambered for the .30 Luger.

In 1904, with interest in the Luger unabated, Springfield Armory purchased a special order of 50 Model 1902 Luger pistols fitted with the “Powell Indicating Device” fitted into the grip and which provided a “cartridge counter” feature showing the user how many rounds remained in the magazine. These pistols were chambered for the more powerful 9mm Parabellum cartridge which was ballistically equivalent to the John M. Browning .38ACP (i.e. .38 Automatic, not to be confused with the .380ACP) and featured a more heavy barrel contour. 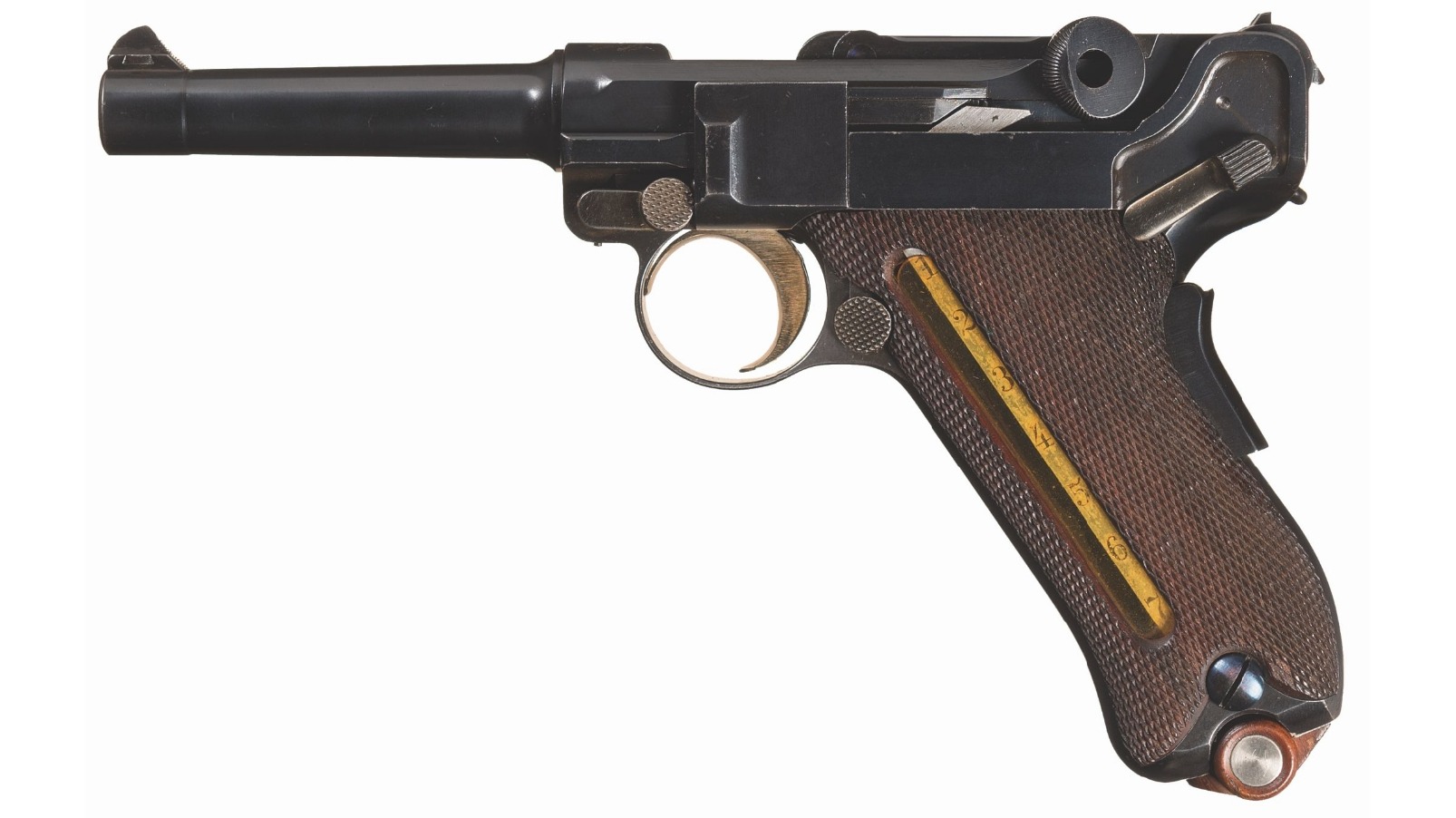 Things were looking promising for the Luger pistol, it was without doubt a serious contender to become the new pistol of the US military as it had already become for the Swiss and German armies.

One of the key elements in ensuring the US military would not adopt one of the .30″, 9mm, or .38″ calibers was field experience in the Philippine-American War of 1899-1902: experience that demonstrated the lack of stopping power of the new smaller bore calibers as represented by the .38 Colt revolvers then in army service. These observations were affirmed by the Thompson-LaGarde tests of 1904 which, despite their lack of scientific rigor, stated that the minimum caliber for a service pistol needed to be .45″. This is not a surprising conclusion as the 45 Colt had proven itself to be an effective man stopping cartridge so it provided the ballistic model for a future self-loading pistol, which would ultimately be the John M. Browning designed Colt M1911.

It was the field experience with the .38 Colt cartridge in the Philippine-American war and the conclusions of the Thompson-LaGarde tests that stopped the US military from adopting the Luger, even in 9mm Parabellum, and regardless of whether it was fitted with a Powell Indicating Device “cartridge counter”, neat idea though that was. It is likely that Georg Luger was losing patience with the U.S. Board of Ordnance by this stage, and Luger pistols were selling well around the world. So when he was invited to re-create his pistol for the newly minted .45ACP cartridge he made two or three and brought them to the US. The Board of Ordnance had supplied George Luger with 5,000 rounds of the new .45ACP cartridge and in Germany he had tried this ammunition and found it to be wanting: it simply did not function his re-designed pistol properly and the fault was not fixable. So Luger had DWM (who made both the Luger pistols and ammunition) to pull bullets from the American ammo and load them with a faster burning powder in new top quality DWM made cases. With that ammo it was possible to get his enlarged Luger pistol in .45ACP to work with German flawless precision. He took these sample pistols and 746 rounds of his DWM loaded ammunition to the 1907 US Pistol Trials to compete against the American home grown pistols from Savage and Colt. 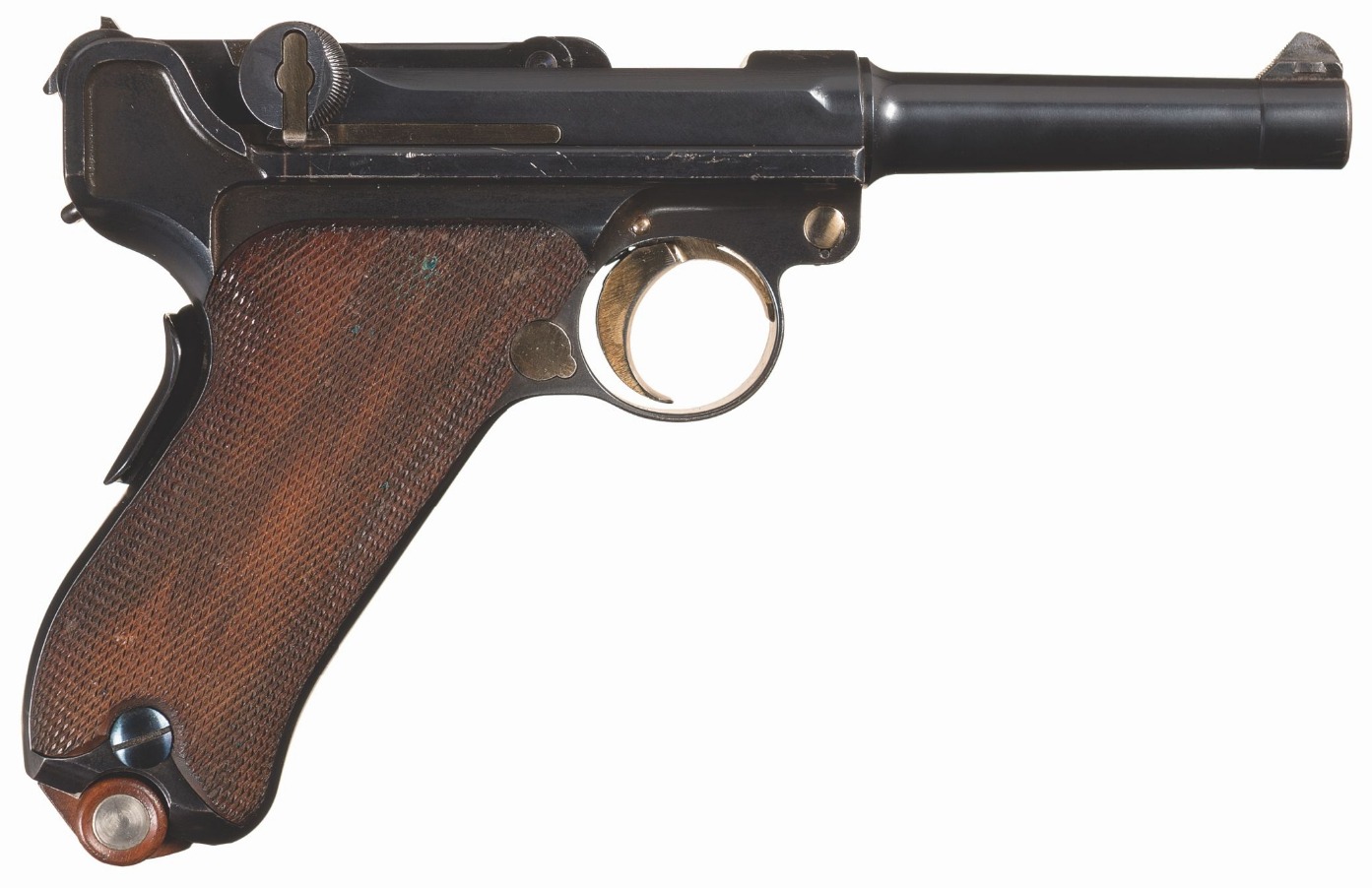 The result was, predictably, that the .45ACP Luger would not meet the reliability requirements with American ammunition (although it did well with the DWM loaded ammunition) and so it was not accepted. Neither the Savage nor Colt were of an acceptable standard either at that point. Thus it was that Georg Luger and DWM withdrew from the American trials despite being invited to submit another 200 pistols for evaluation. In the end result it was John M. Browning who re-designed his pistol and created the Model of 1911 which would go on to serve the United States through two world wars and a number of others, and which is still in use.

The “Cartridge Counter” American Eagle M1902 Luger is one of the most rare Luger variants because only 50 of them were made. These pistols have serial numbers in the range 22401-22450 and were all chambered for the 9mm Parabellum cartridge. 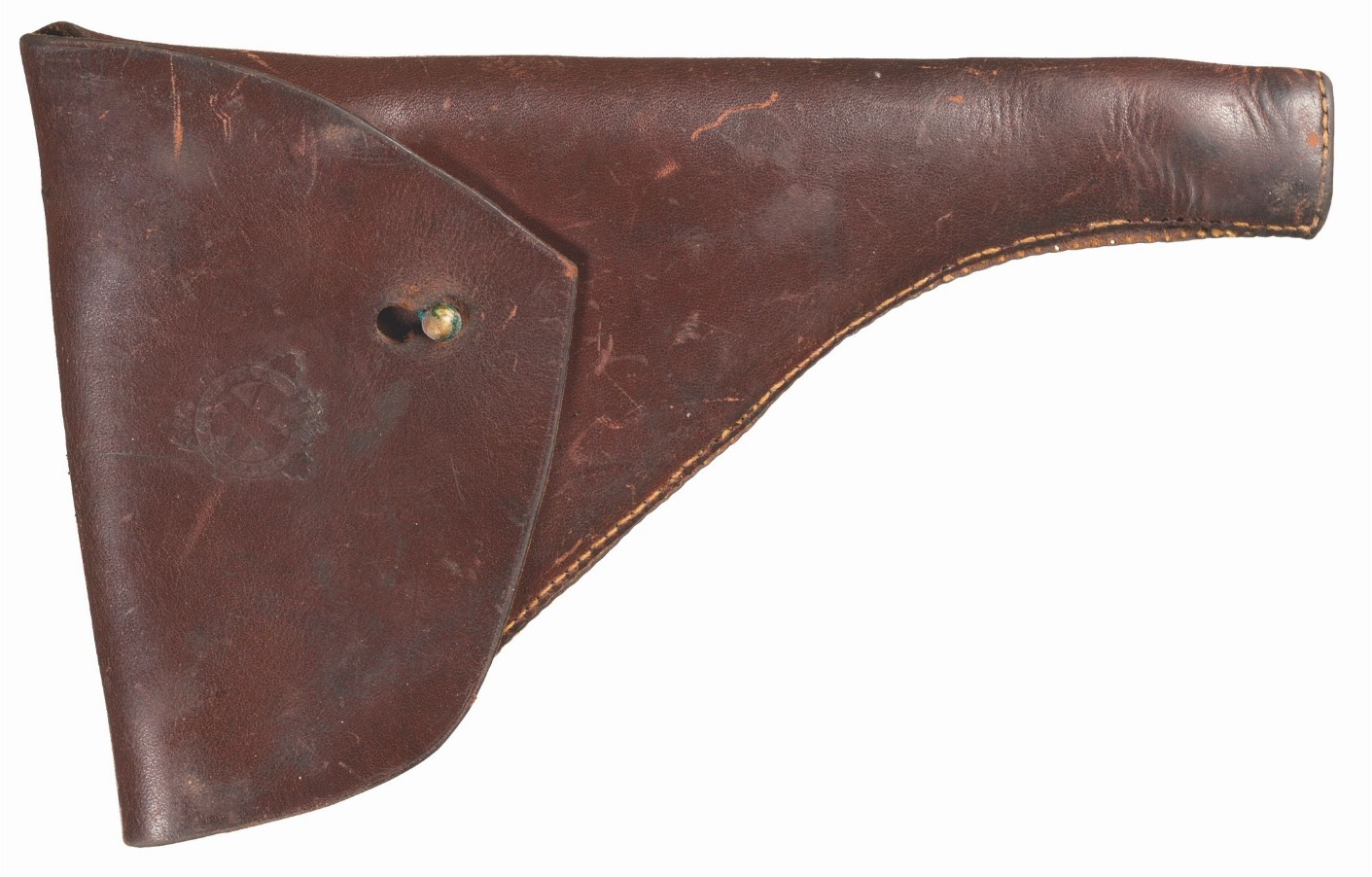 The “cartridge counter” model features a celluloid window in a cutout in the grip. Inside that is a screw which engages with the magazine follower so that as rounds are fired the indicator shows how many are left.

These pistols were issued to the Cavalry and Light Artillery Boards at Ft. Riley, Kansas, on April 19, 1904 for testing and as a result of that testing the Boards recommended that the pistols not be adopted.

One of these rare pistols is coming up for sale at time of writing by Rock Island Auction at their Premier Gun Auction to be held between December 6th to 8th, 2019.

You will find the sale page for this M1902 cartridge counter Luger pistol if you click here.

Rock Island Auction describe the condition of this pistol as follows:- “Excellent plus, as issued, with over 99% of the original blue finish, showing only the smallest amount of minor handling marks overall. Grips are excellent with some minor yellowing of the correct original celluloid cartridge window and very crisp checkering. Holster is very fine, showing a few minor scuffs. Mechanically excellent. The Crown Jewel of Luger or American Martial Automatic Pistol collecting. Provenance: The Putnam Green Collection, The Gabe Lawson Collection.” 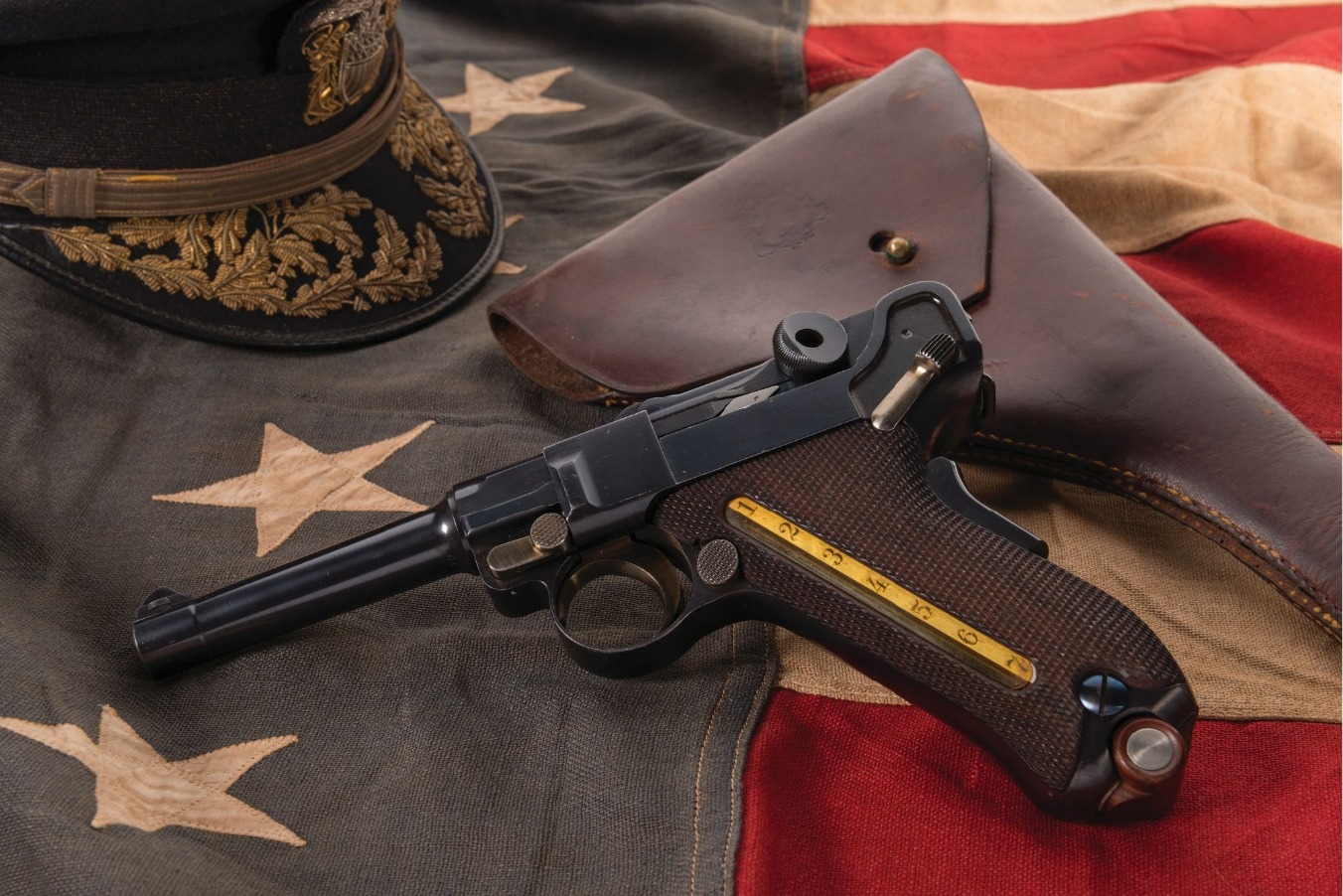