The Battle of Campeche

The story of the Colt Model 1851 “Navy” begins at the Battle of Campeche fought on April 30th, and on May 16th of 1843. Mexico won the Battle of the Alamo of February 23rd – March 6th of 1836 but the barbaric cruelty the Mexican army engaged in, in the hope of frightening their opponents into submission, backfired on them and instead of instilling fear the Mexican’s cruelty instilled a deep desire for revenge in their enemies. It was thus on April 21st of 1836 that General Sam Houston’s army met with Mexican General Santa Anna’s army, the army responsible for the Alamo and subsequent slaughter at Goliad, at the Battle of San Jacinto, and inflicted that revenge while paving the way for Texas to become an independent state.

Following on from this victory it was believed however that the Mexicans were quietly plotting a revenge of their own and that it would take the form of an amphibious assault on Texas in order to reclaim it.

In order to ensure this was not going to be an option for them Commodore Edwin Ward Moore had been harassing Mexican shipping in the Gulf of Mexico keeping it nicely unsafe for them to attempt anything.

The main battle for control of the area began with a skirmish on April 30th, 1843 between the Mexican steamer “Regenerator” with some sailing ships and the combined Texian and Yucatan ships that had been engaging in the clearance of Mexican shipping from the Gulf. The skirmish finished up as a draw with both sides withdrawing to repair and rearm ready for the main confrontation that was sure to come. 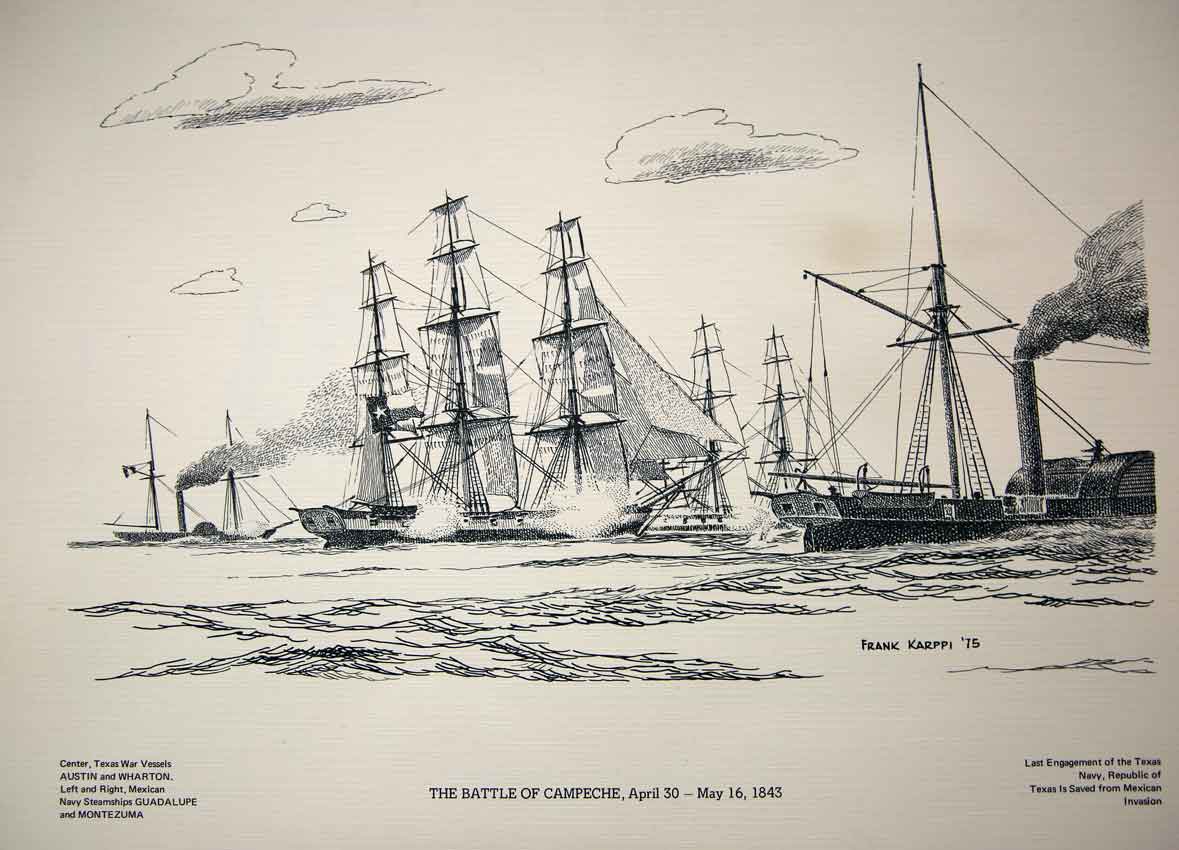 On May 16th that main confrontation occurred when Mexico sent the most modern warships in its fleet, the steam powered 1,200 ton “Guadalupe” and the “Moctezuma” at the head of a squadron of another five warships assembled with the aim to remove the Texian and Yucatan nuisance and restore Mexican dominance in the Gulf.

The “Guadalupe” and the “Moctezuma” were fitted with Paixhan’s guns which could fire exploding shells and being steam powered should have had the advantage over the Texian/Yucatan squadron which comprised the 600 ton, 20 gun sloop of war “Austin”, the 16 gun brig “Wharton” from Texas, plus two schooners and five gunboats from Yucatan.

It was to become the only battle in naval history in which sailing ships were able to defeat steam warships and the Battle of Campeche set the seal on Texas independence.

Samuel Colt had been helped by Commodore Moore who had purchased Colt Paterson Revolvers for the Republic of Texas Navy in 1837, many of which were likely involved in the Battle of Campeche. Despite that Colt’s business had gone bankrupt by 1843 but he was financially rescued when Colonel John C. Hays gave him the order to make the firearms that would be used by the Texas Rangers in 1847.

When Samuel Colt began work on the design of a new revolver in 1847 he was originally going to call it the “Ranger” in honor of his order to make arms for the Texas Rangers, but seems to have changed his mind and settled on the name “Navy” in honor of Commodore Moore’s victory at the Battle of Campeche. Not only was Colt’s new revolver named in honor of that battle but Colt had an engraving of a scene from the Battle of Campeche put on the cylinders of this “Navy” model.

This engraving on the cylinders of the “Navy” model revolvers was done by use of the “pantographic” machine invented by Waterman Lily Ormsby, which he called the “grammograph”. So the engraving was able to be done inexpensively in a mass production environment. 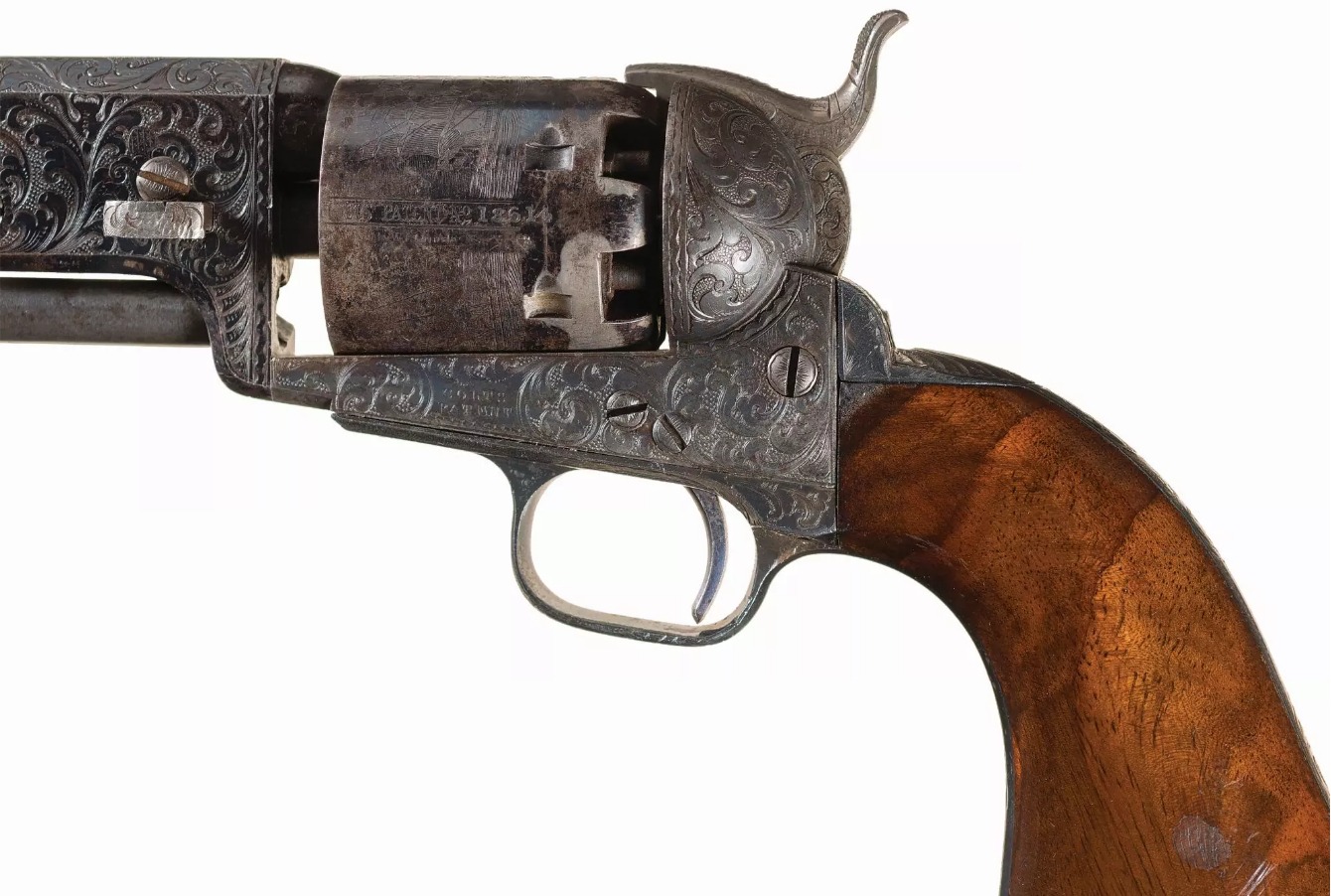 Colt finalized his design for the new “Navy” revolver in 1850 and it entered production in 1851. The revolver was a .36″ caliber single-action “cap and ball” muzzle-loading arm which could use loose black powder or combustible cartridges with either ball or conical bullets of .375″-.380″ diameter. Ignition being provide by mercury fulminate percussion caps that were seated on nipples on the revolving cylinder end.

The cast lead bullets used in the Model 1851 Navy were of 80 grains weight and were driven at the quite high velocity of around 1,000fps.

The Colt Navy of 1851 became Colt’s second most popular model of that time with 215,000 manufactured in the United States and another 42,000 made in Colt’s British factory in London. So these revolvers were not only popular in the United States but also across the British Empire. 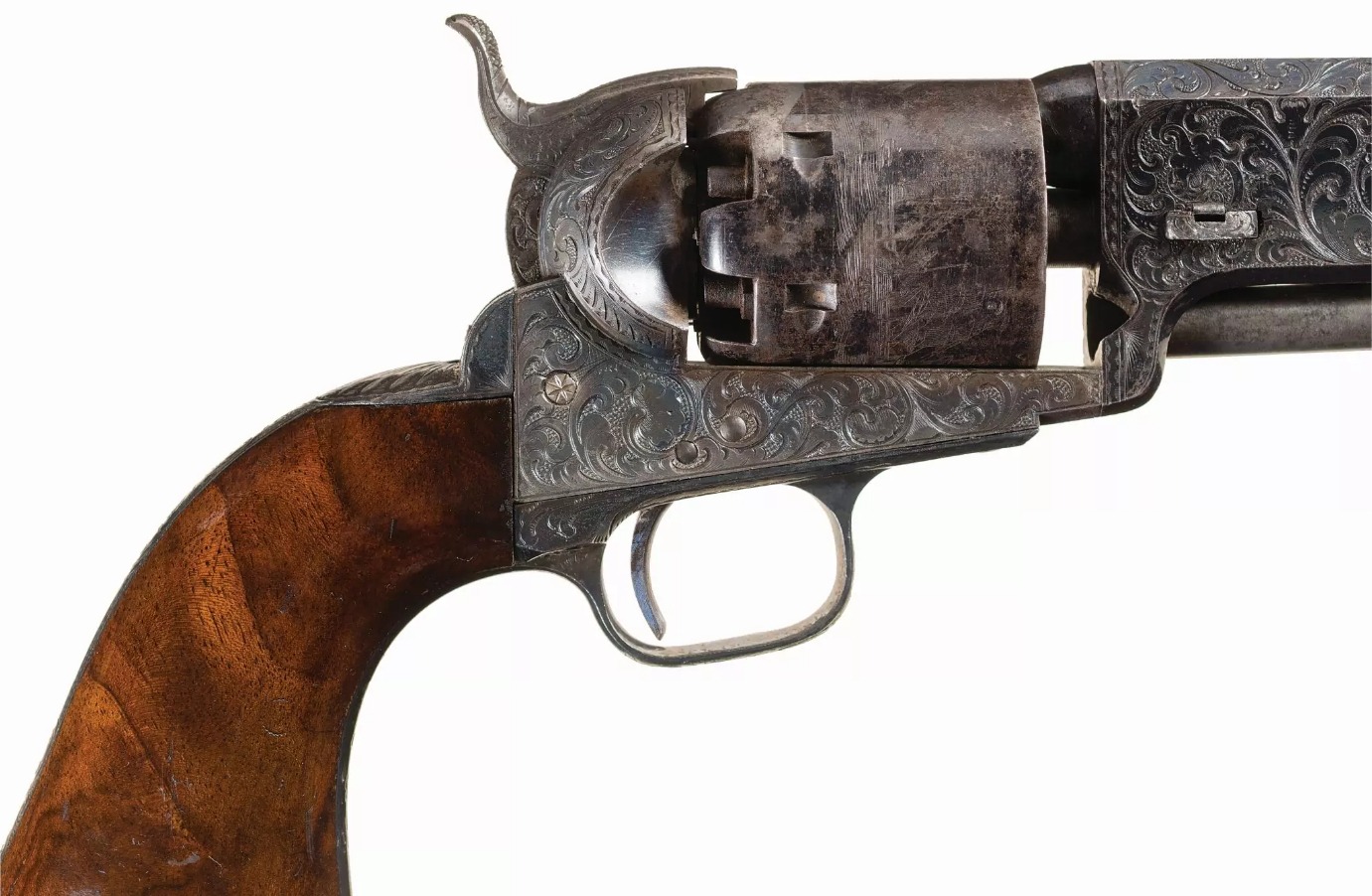 The Colt Model 1851 Navy remained in production all the way through until 1878 with the muzzle-loading version remaining popular despite the advent of cartridge loading revolvers such as Colt’s Single Action Army of 1873, otherwise known as the “Peacemaker”.

A Cased and Factory Engraved Example

An original cased and factory engraved example of the Colt Model 1851 Navy is coming up for sale on 6th December, 2019 by Rock Island Auction. 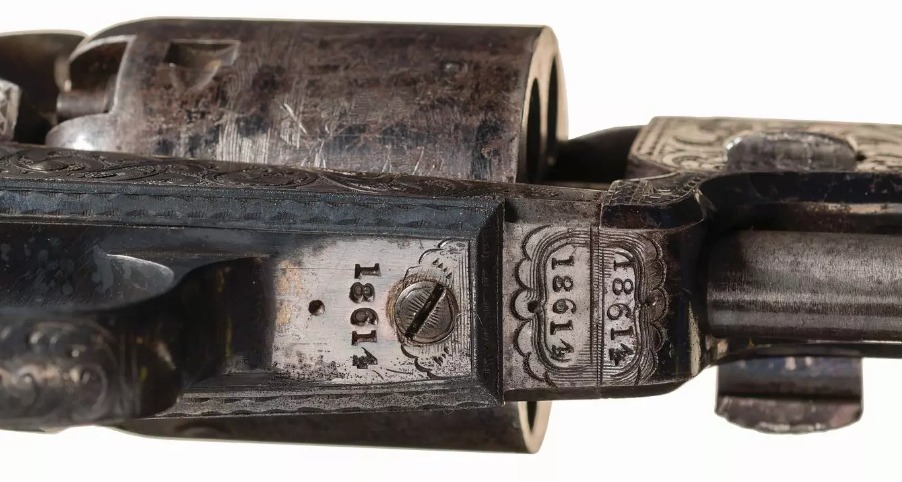 The “donut scroll” engraving on this revolver matches other revolvers engraved by Master Engraver Gustave Young, while the cylinder features the standard “grammograph” engraving of the scene of the Battle of Campeche. 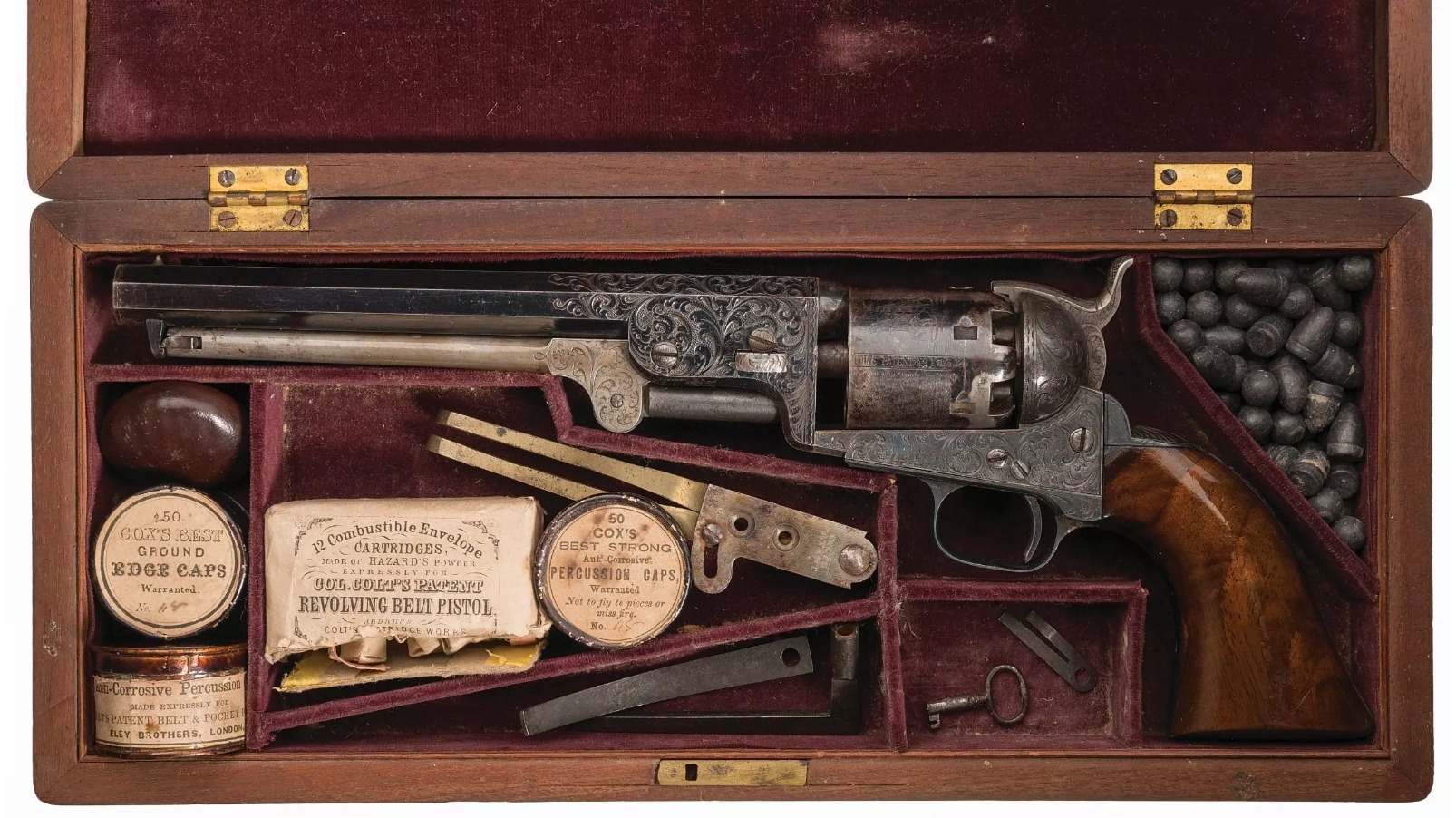 You will find the page on the Rock Island website with full details on this revolver if you click here.