The Steyr Model 1912 was, arguably, one of the greatest pistols of the early era, around the First and Second World Wars. It stands alongside the Colt M1911 and the Luger P08, and yet it is not nearly as well known as its peers. Yet this was a handgun built to withstand the rigors of trench warfare, and it was built to use a more powerful cartridge than the 9mm Parabellum, it was designed around the 9x23mm Steyr cartridge which drove a 115 grain bullet at 1,215fps, ballistics similar to standard loadings of the .38 Super. 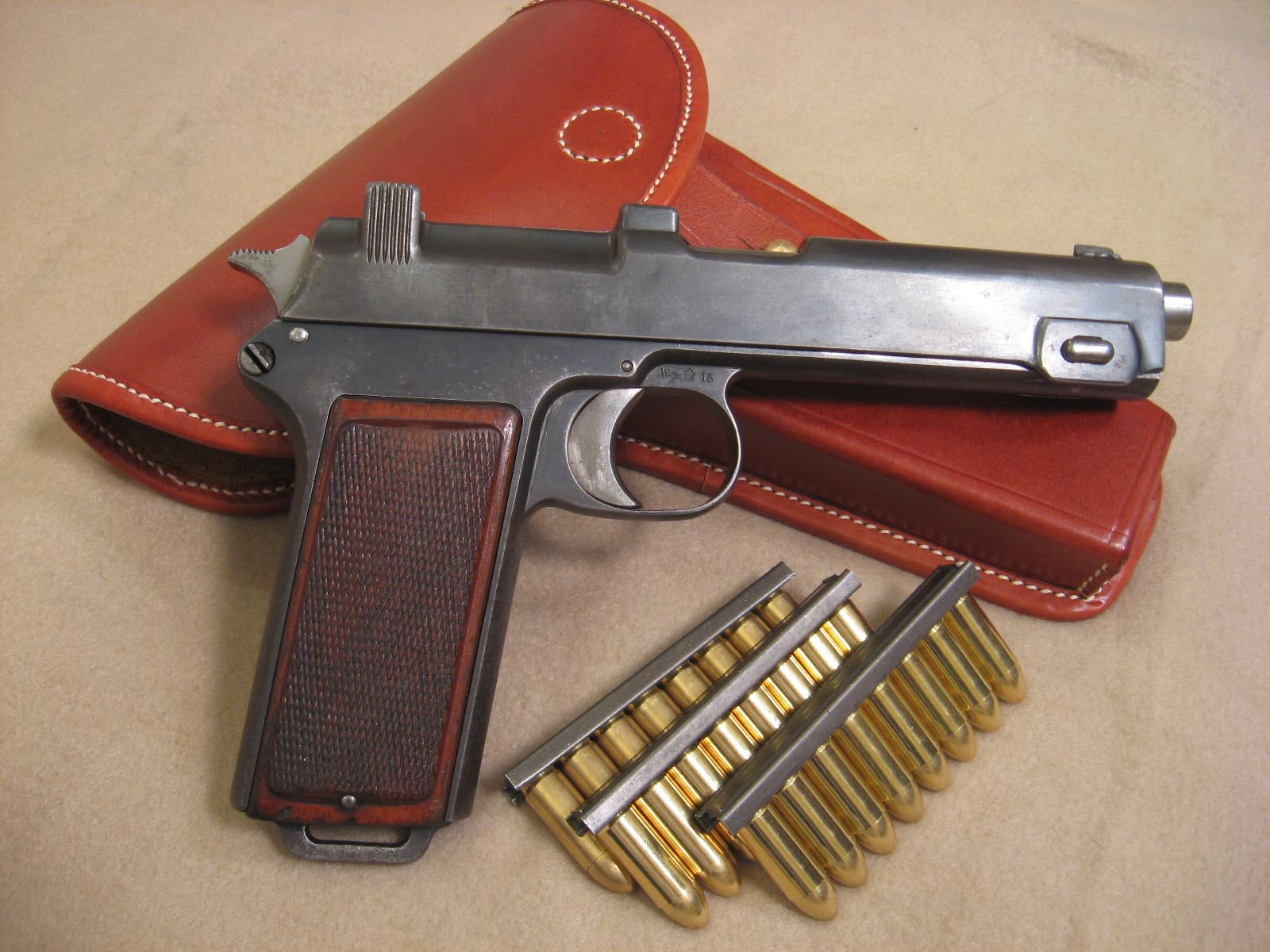 The Steyr Model 1912 with the 8 round stripper clips it used to reload its fixed magazine. (Picture courtesy Drake000 @ Wikipedia).

The design of the Model 1912 was based on practical experience by Austro-Hungarian military officers with its predecessor, the Roth–Steyr M1907, which had been designed by Czechoslovakian designer Karel Krnka. The Steyr Model 1912 is essentially an improved version of the Roth-Steyr M1907 although the two pistols look very different externally. Looking at the M1912 however we can quickly see the ergonomic changes that were made; the pistol was made with a slim profile, like the Colt automatic pistols of the time, the cocking lug is serrated and prominent to provide a good grip in the mud and slime of trench warfare, the pistol does not have a detachable magazine, and field stripping was kept as simple as possible. To field strip the pistol the spring wedge at the front left of the slide was pushed downwards and then out of the slide (see part #003 in diagram below). These wedges were marked with an arrow on the top to help ensure they were re-assembled correctly. Once the wedge was removed the slide could be withdrawn to the rear and upwards and the pistol taken apart for cleaning. 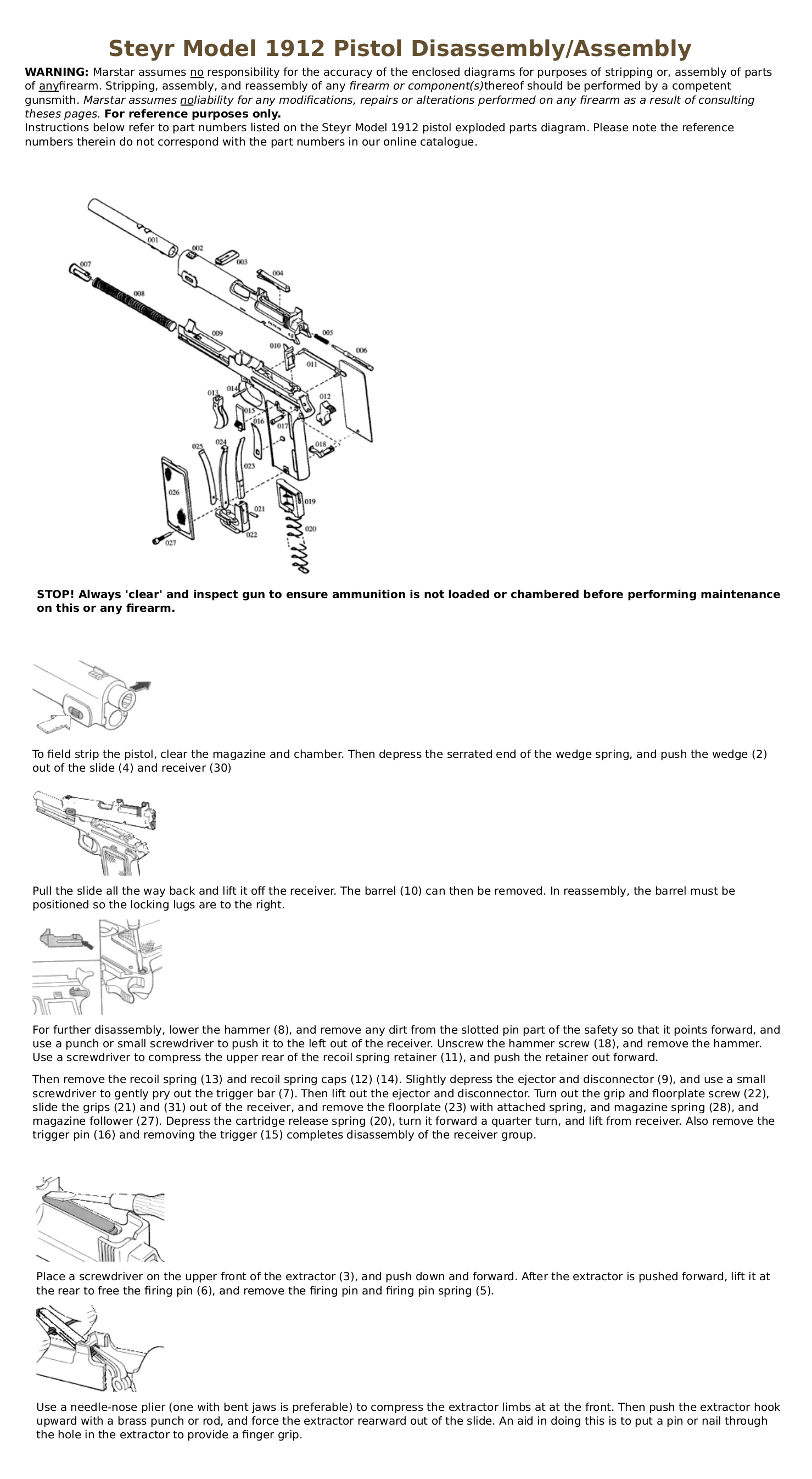 Many will immediately ask how not having a detachable magazine could be a design advantage? The answer requires some lateral thinking: the principle cause of an automatic pistol failure to feed reliably is damage to the magazine, or the magazine being just a little incompatible with the pistol through manufacturing variations. By making the magazine an integral part of the pistol the designer eliminated the potential for it to be lost, damaged, or incompatible. The M1912 was made to be reloaded by the use of eight round stripper clips, just as the Austro-Hungarian military rifles were reloaded, simplifying training. Whilst it is true that dropping a magazine from a Colt M1911 and inserting a new one is quicker than using a stripper clip, it must be remembered that even for US soldiers serving in the First World War spare magazines were not usually supplied for the M1911 pistols, and loading a Steyr M1912 with a stripper clip is much faster than reloading a Colt M1911 magazine one round at a time. 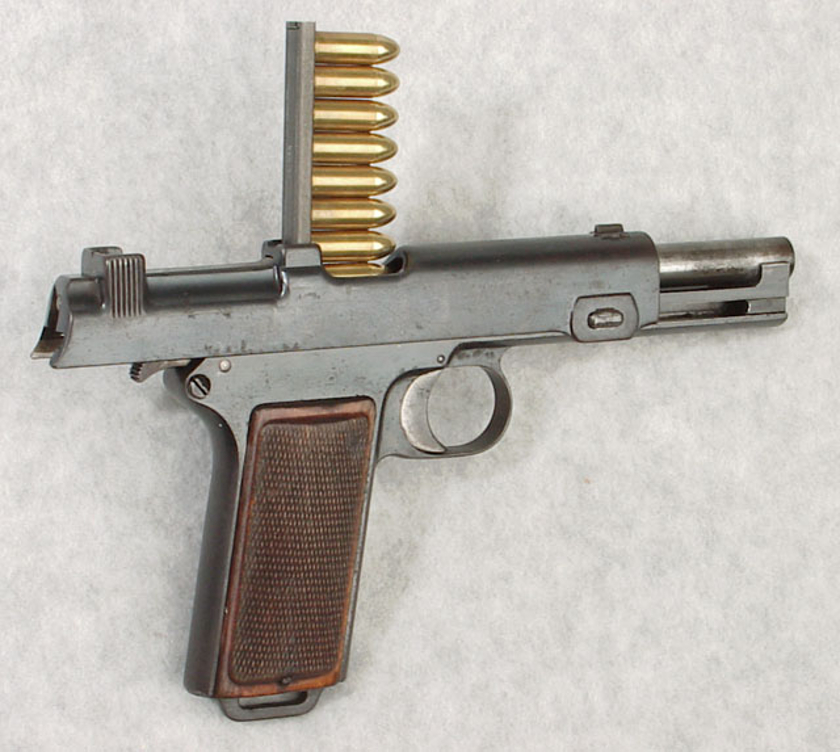 The Steyr M1912 was loaded by stripper clip.

The Steyr M1912 was not a Browning inspired design and it inherited the short recoil rotating barrel principle from Karel Krnka’s Roth -Steyr design, but simplified and tidied up to create a ruggedly reliable system which kept the barrel in the same alignment throughout it’s firing/reloading cycle. 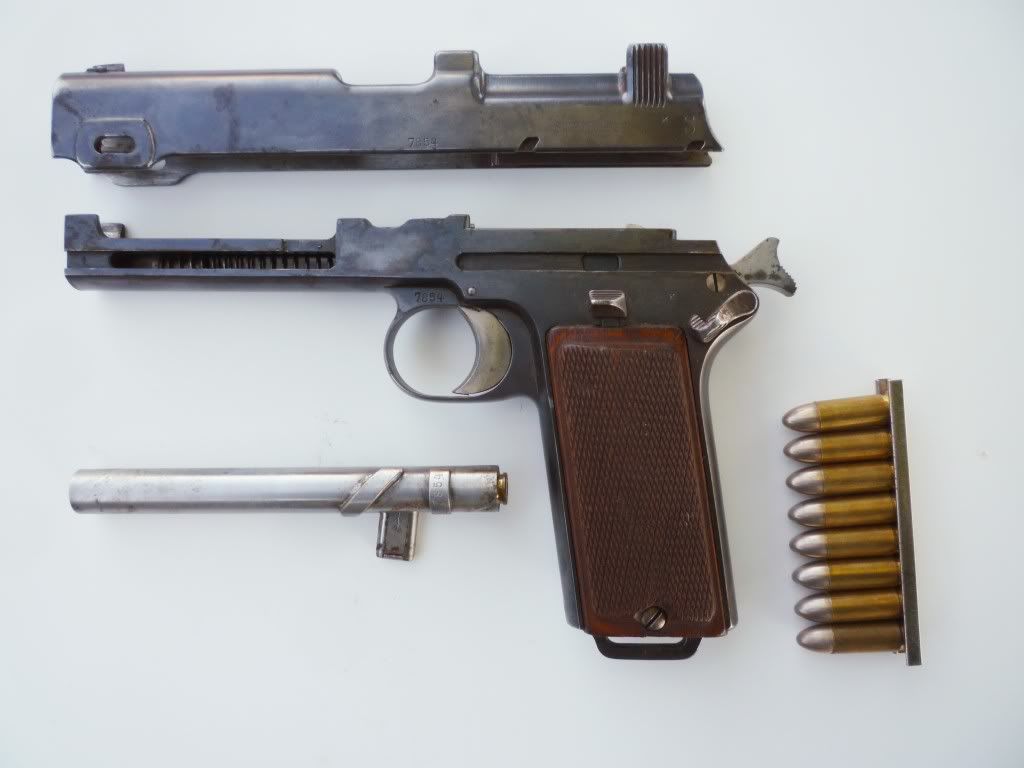 The pistol’s mechanism features two locking lugs on the top of the barrel which engage in recesses in the top of the slide. Under the barrel, at the breech end, is a third locking lug that engages in a slot the frame but that slot allows the barrel and slide to recoil about 0.5″, and just ahead of that is an angled cam that runs in a recess in the frame. 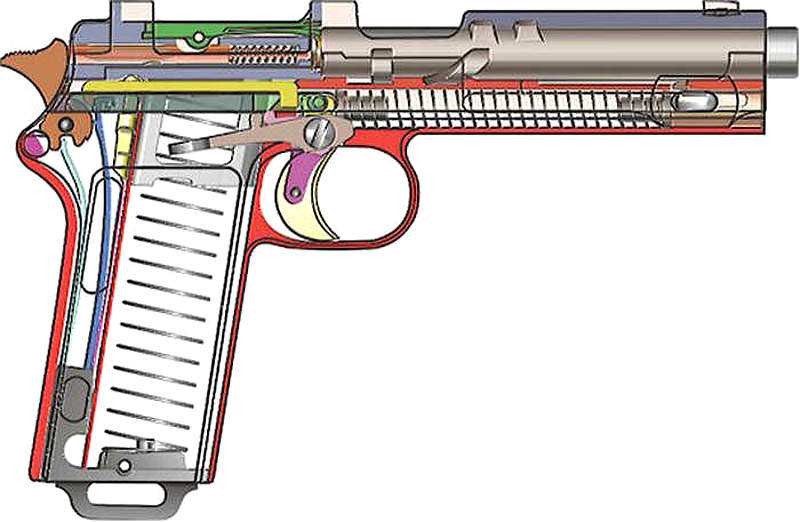 Cross sectional diagram of the action of the Steyr M1912.

On firing the barrel and slide are locked together and they recoil together until the angled cam under the barrel forces the barrel to rotate, disengaging the two locking lugs on the top of the barrel. The lug under the barrel, just behind the lug behind the angled cam, stops the rearwards travel of the barrel whilst the slide continues rearwards to battery ejecting the fired cartridge case in the process. The spring then propels the slide forwards stripping a cartridge from the magazine and causing the barrel to rotate and lock the action ready for firing again. The action proved to be efficient and reliable, with good resistance to being clogged by mud or grime. 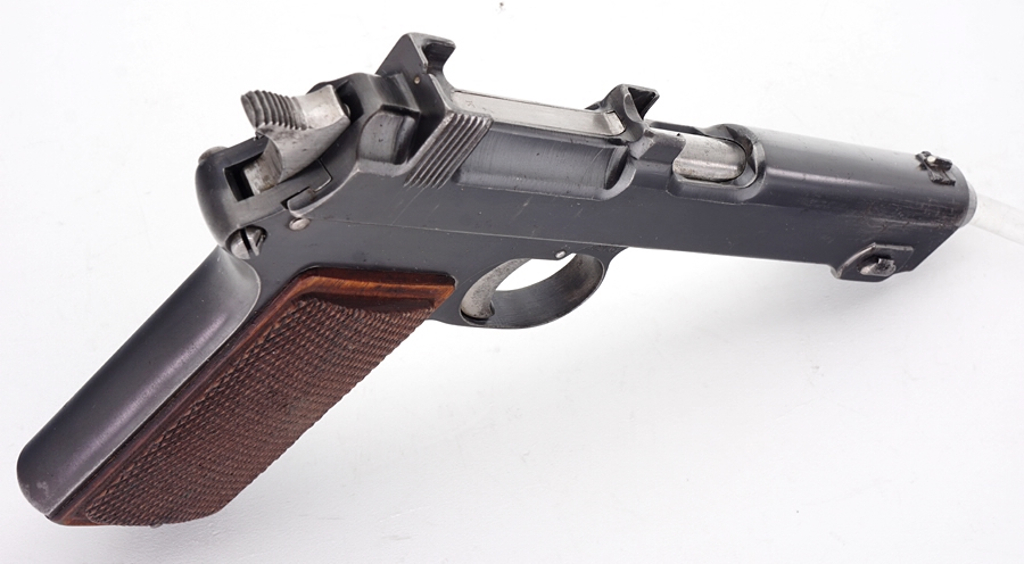 The dimensions of the Steyr were very similar to those of the Colt M1911, barrel lengths for both being 5″ and the weight of the two pistols being almost identical.

The Steyr M1912 was created as the replacement for the Roth-Steyr M1907 and the aging Rast & Gasser revolvers of 1898. Both the Roth-Steyr M1907 and the Rast & Gasser M1898 used 8mm cartridges (rimless for the automatic pistol and rimmed for the revolver) but with the situation in Europe leading inexorably to war it was understood that the Austro-Hungarian military needed reliable and more powerful weapons for the coming conflict: and the Steyr M1912 was one of the results of that decision-making. Although described as the Model 1912 the Steyr was actually created in 1911, the same year as the Colt M1911, but not formally adopted into the Austro-Hungarian military until 1914, as the war broke out. Demand for the pistols was high and even the German military ordered 10,000 of these pistols. Orders for the M1912 also came in from the governments of Chile, and Romania, although when Romania entered the First World War on the side of the enemies of the Austro-Hungarian Empire Steyr stopped shipment to them. 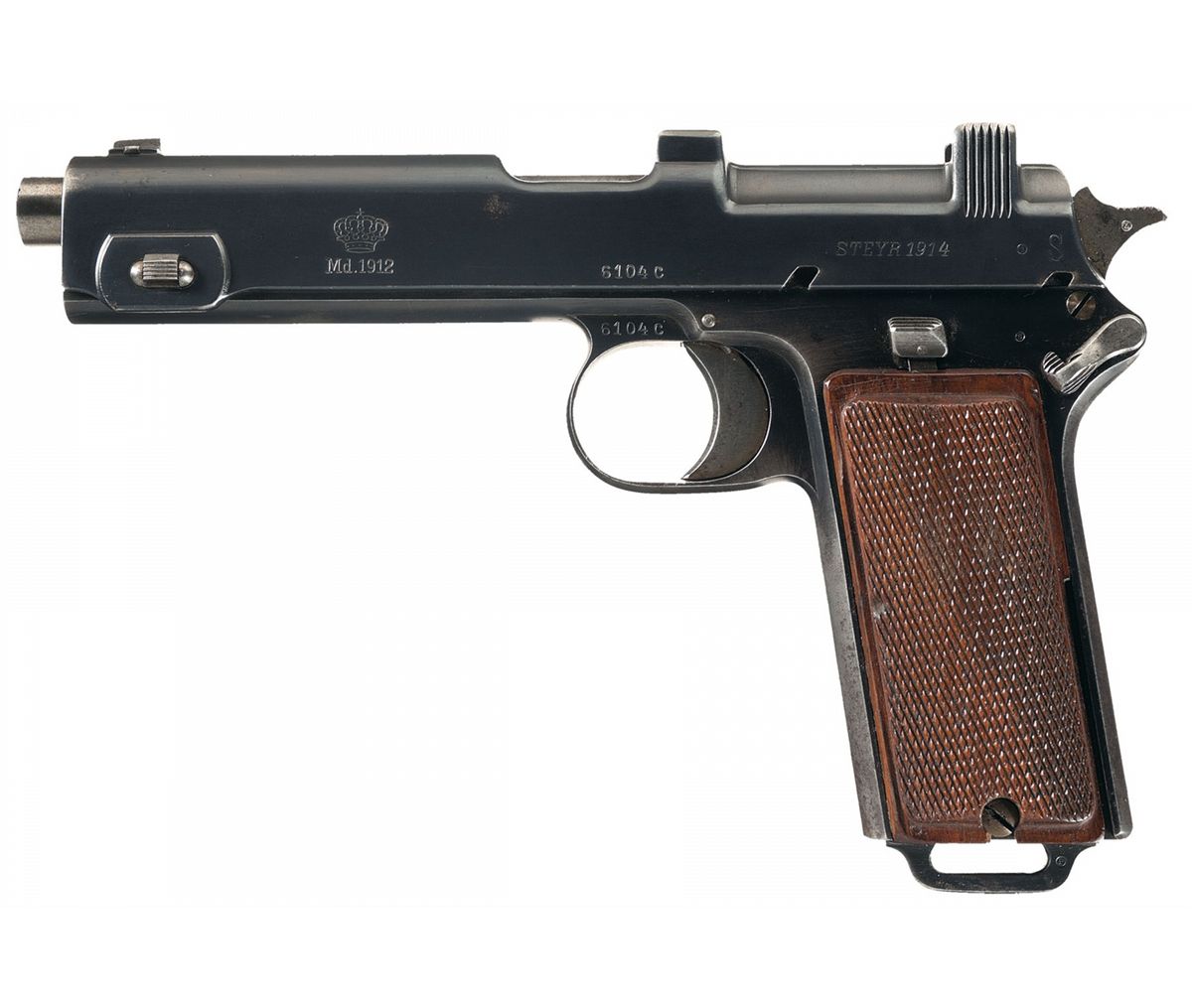 After the end of the First World War Steyr produced a commercial version of the M1912 which was popular with Austrian officers, but the pistols were not made in large numbers again until Austria was annexed by Nazi Germany in 1938. It has been jokingly said that Hitler liked Steyr arms so much that he annexed Austria so he could get control of the company. Steyr were the makers of the much admired Mannlicher-Schönauer rifles and whether their arms were made for sporting or military use they were always of the highest quality. Once in control of Austria the German military placed on order for 60,000 Steyr M1912 pistols, this time wanting them chambered for their standard military cartridge, the P-08 9mm Parabellum. These M1912 were officially designated 9mm P12(Ö) (the Ö standing for Österreichisch (translated “Austrian”). These pistols can be identified by an “08” or “P-08” stamp on the slide and on the frame above the trigger guard a small “Wehrmacht Eagle” proof/acceptance mark. A quantity of existing M1912 9x23mm Steyr pistols were converted to 9mm Parabellum and sometimes these have their hand-grips marked with a large “9” to distinguish them from their unmodified siblings.

An unusual variant of the standard M1912 was the M1912/P16 machine pistol that was capable of fully automatic fire. These pistols feature an extended 16 round magazine that were to be loaded by using two 8 round stripper clips. The long magazine may have been of some help in controlling the machine pistol in fully automatic fire mode but with a cyclic rate of 800 rounds per minute a full 16 round magazine would be emptied in just over a second. 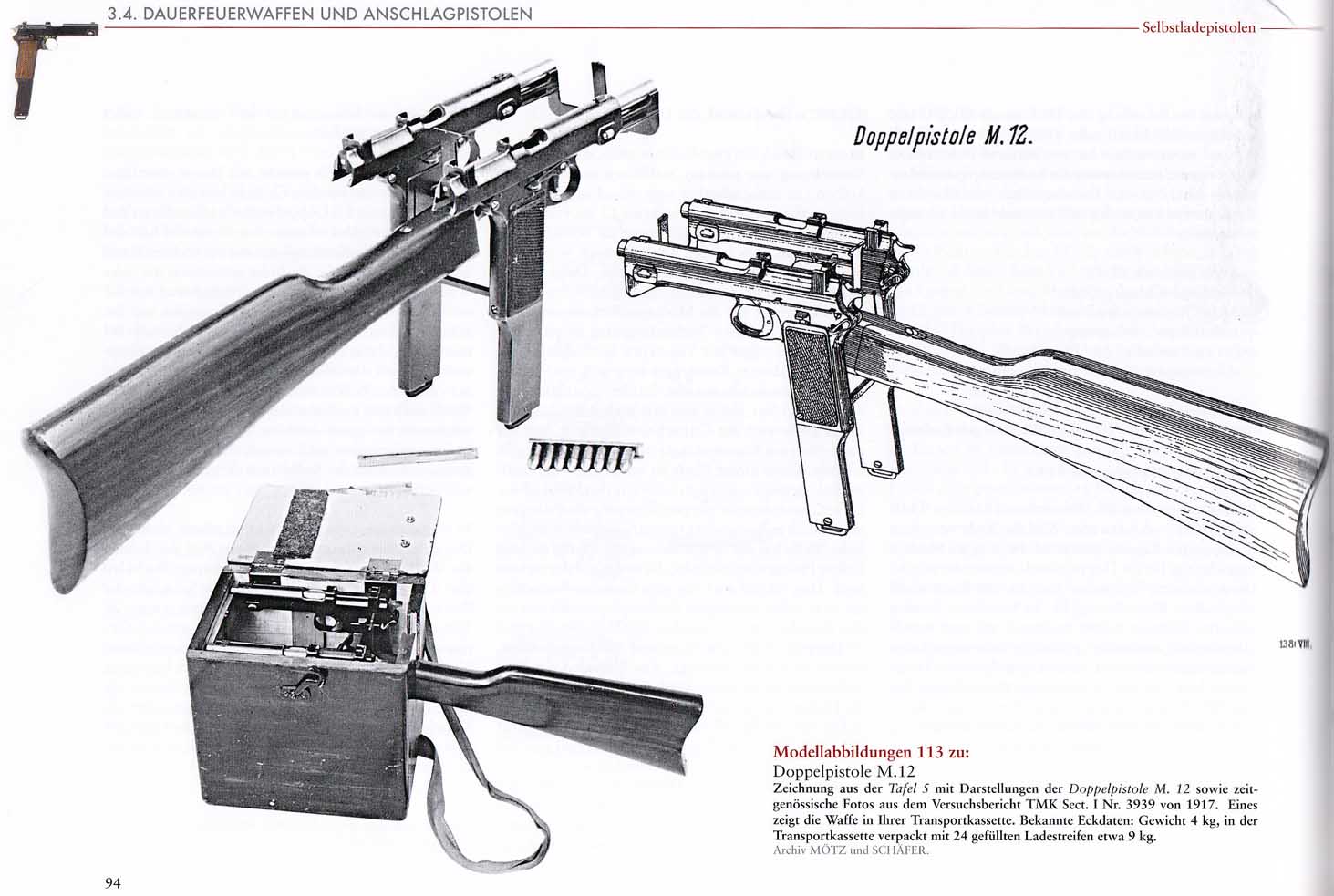 The Doppelpistole M.12 was an arrangement to have two Steyr P.16 machine pistols side by side.

The Doppelpistole M.12 was simply two Steyr P.16 machine pistols bracketed together with a single shoulder stock. Only a handful of these were made and must rate as one of the more unusual inventions of the First and Second World War periods. 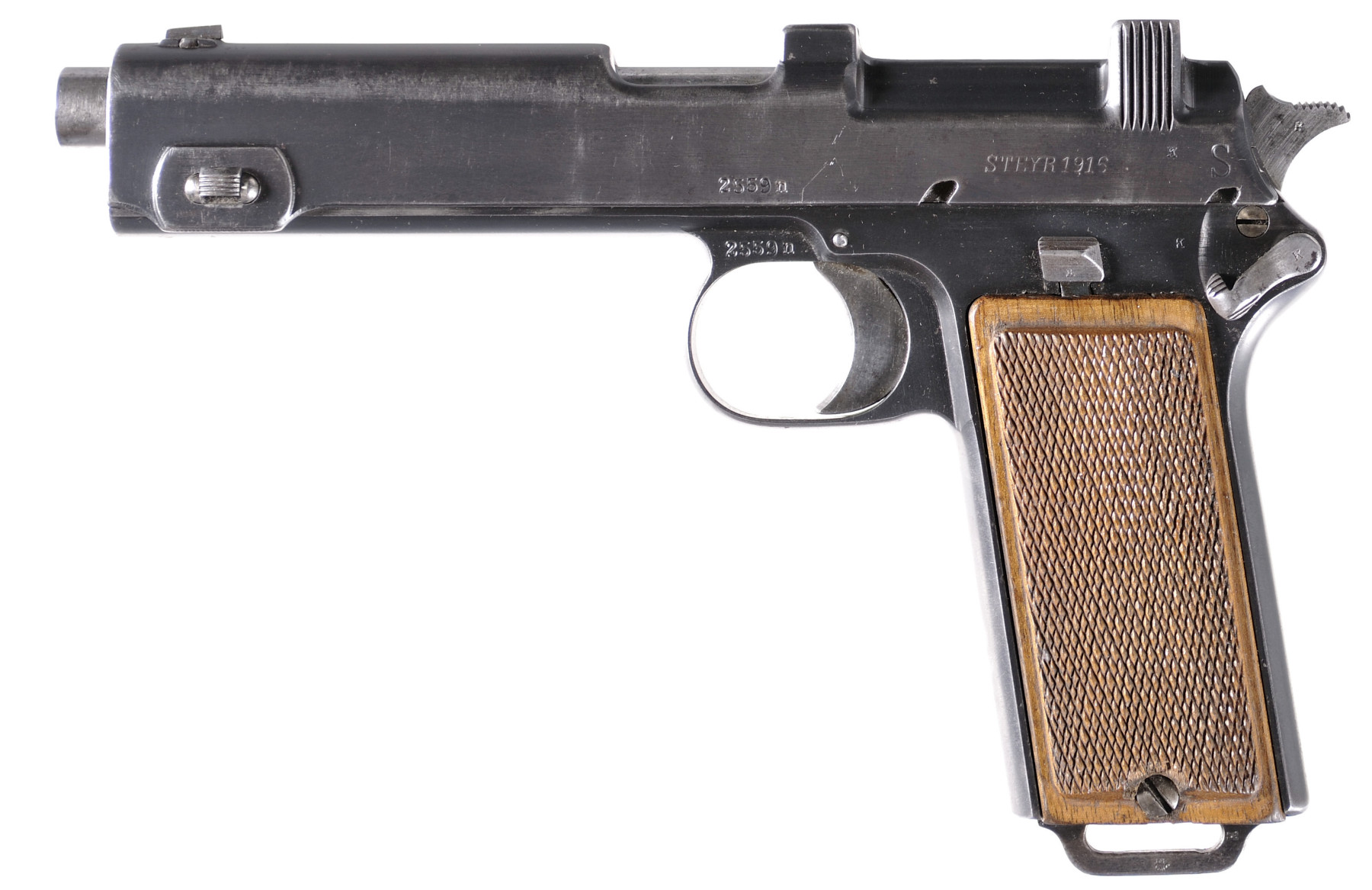 The Steyr Model 1912 was one of the great handguns of both the First and Second World Wars. It was a thoroughly thought out design manufactured to Steyr’s usual exceptionally high standards. Although many have labeled the design as being something of an oddity we need to remember that it was created in a period of much new “out of the box” thinking. When understood in the light of how Karel Krnka and the engineers at Steyr understood their design brief there is nothing odd about it. About the only thing that feels a bit awkward about the M1912 is the grip angle which seems a tad upright if one is used to something like a Colt M1911. But this was one of the great military pistols of the twentieth century.

9x23mm Steyr ammunition for M1912 pistols is not easy to find but sometimes can be found, Fiocchi have made the cartridge in recent years.

These pistols were made in large numbers, exact numbers are not known but probably around 300,000. Some variants are quite rare and are expensive collector’s items, but the general issue versions can often be picked up at gun shows and auctions for reasonable prices. Rock Island Auction have the pistol pictured above and below coming up for sale at their March 29th, 2018 auction. 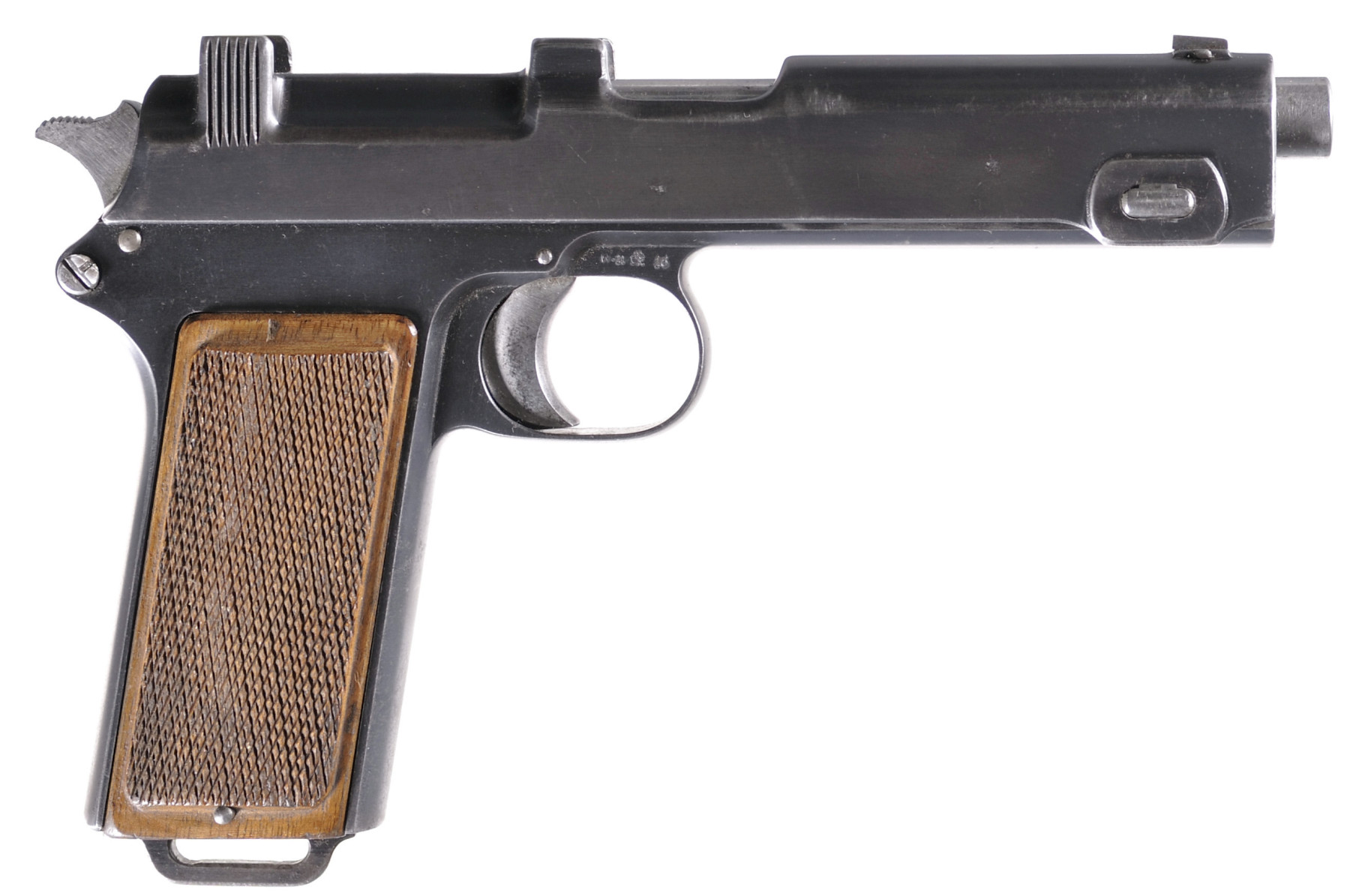 This pistol is expected to sell in the range USD$400-$600, so it’s a quite affordable collector/shooter that could be much fun to take to the range, and enjoy in the display cabinet.

You’ll find the sale page for this pistol if you click here.

The Steyr Model 1912 is a handgun I’ve got a lot of respect for. It is a clever design made to Steyr’s very high quality control standards.