When I think of a “Tahr Hunt” my mind conjures up images of a plane trip to “The land of the long white cloud” (New Zealand) and a journey into the “Lord of the Rings” country to hunt Himalayan Tahr. So when I first came across the guns from TarHunt I initially wondered if that was the sort of hunt they were named after. They’re not, they’re intended for a very different style of hunting than that practiced in New Zealand’s alpine ranges. The guns from TarHunt are the logical extension of the old British idea of a “ball and shot gun” exemplified by the Holland & Holland Paradox and the Westley Richards Explora guns of the golden age of African and Asian hunting. 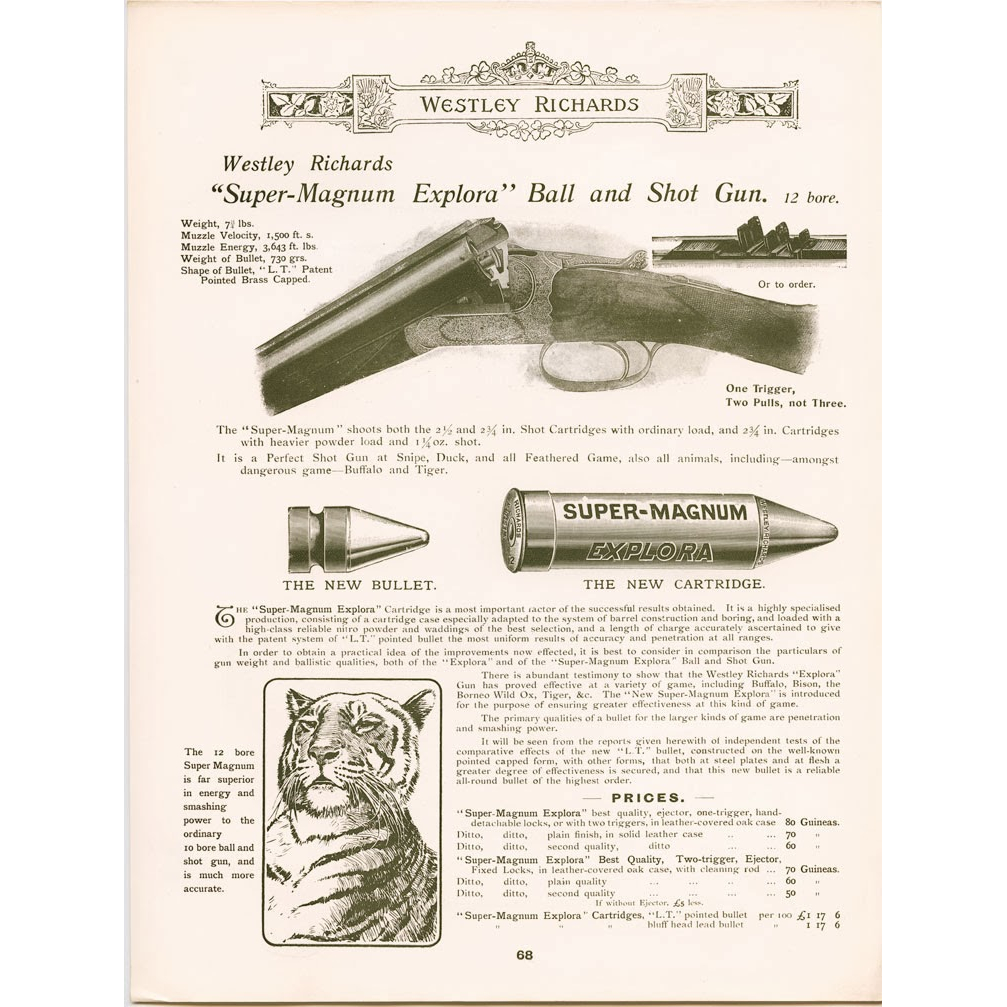 Westley Richards advertisement for their Explora guns and unique ammunition.

The original idea behind a ball and shot gun was that it would combine the attributes of a shotgun and a rifle in the one firearm. This was a great idea in places like Africa, India, Indo-China and South-East Asia. In such places one might go out for a bit of bird hunting but unexpectedly come across a lion, tiger, buffalo or gaur. An encounter with any of those wild creatures would not tend to finish up as being a harmless experience. Wild animals have not all watched Disney’s “Bambi” nor have they read the animal rights pamphlets that assure us that lions and tigers don’t kill people, and that cape buffalo and gaur are our furry friends. Chance encounters such as these were, and still are, deadly dangerous. So to provide the hunter with a shotgun that could be used for small game shooting but which would double as a dangerous game rifle the Holland & Holland Paradox and the Westley Richards Explora were invented.

With the progressive ending of the Empires of Britain, France, Germany, Holland, Portugal and Spain the need for the ball and shot gun declined and they faded into obscurity, but the idea of having a shotgun that could perform like a rifle did not, thanks in part to the inventiveness of such men as Wihelm Brenneke and his shotgun slugs.

Just as times change so the types of firearms needed for hunting in different places also change, and in some places there is a requirement that deer hunting only be conducted with a shotgun: that shotgun is permitted to have a rifled barrel in the interest of ensuring exact shotgun slug placement and a humane kill. This sort of restriction is commonly enacted in areas where it would not be advisable to use a typical center-fire rifle simply because the area is too heavily populated. A shotgun requires a much smaller danger area than a center-fire rifle so it can be used in places a rifle should not. This is true in some US states, such as upstate New York, and in places like Hokkaido in Japan for example. 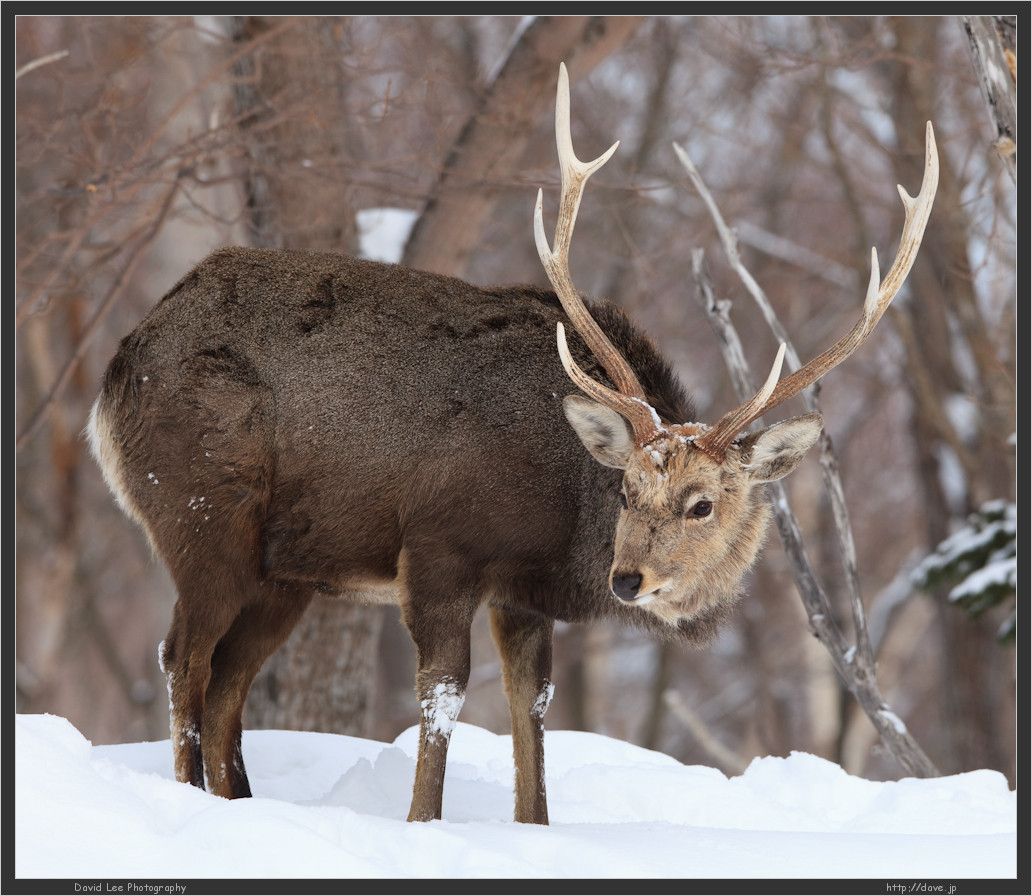 Historically, shotgun slugs were not intended for accuracy back in the 1960’s and 1970’s. Back then the thinking seemed to be that a shotgun was really for shooting shot, and slugs were really not for use out beyond fifty yards, and truthfully smoothbore shotguns were only capable of “minute of pie plate” accuracy, enough for twenty to thirty yard shots on wild pigs for example, but, to be sensible, not much beyond that. Of interest is that the older Paradox and Explora ball and shot guns were capable of much better accuracy than that. So it was only a matter of time before people started creating rifled barrels for slug guns all over again: but this time no so much for Africa, Asia, and dangerous game situations, but for deer and wild boar in places where either regulation, or practicality, dictated such use.

Remington 870 with interchangeable slug barrel and smoothbore barrel. A typical approach to slug use in the past. (Picture courtesy Rock Island Auction).

Randy Fritz, founder of TarHunt, had experienced hunting in upstate New York during the 1960’s and had been quite dismayed by the accuracy – or rather the lack thereof – that slug hunters were stuck with. But he’d moved back to Pennsylvania and gotten back into shooting accurate rifles, including much benchrest shooting. It was not until 1987 that Randy saw an advertisement for a rifled shotgun barrel and it caught his interest. By this stage he was building his own accuracy rifles and he had a “why not” moment, why not build an accuracy “rifle” using a rifled shotgun barrel. A year later Randy put that “why not” into action and built his first “shrifle” (i.e. a cross between a shotgun and a rifle). That first effort was capable of 5″-6″ groups at 100 yards, performance that could be described as “minute of rather small pie plate”, but not MOA. 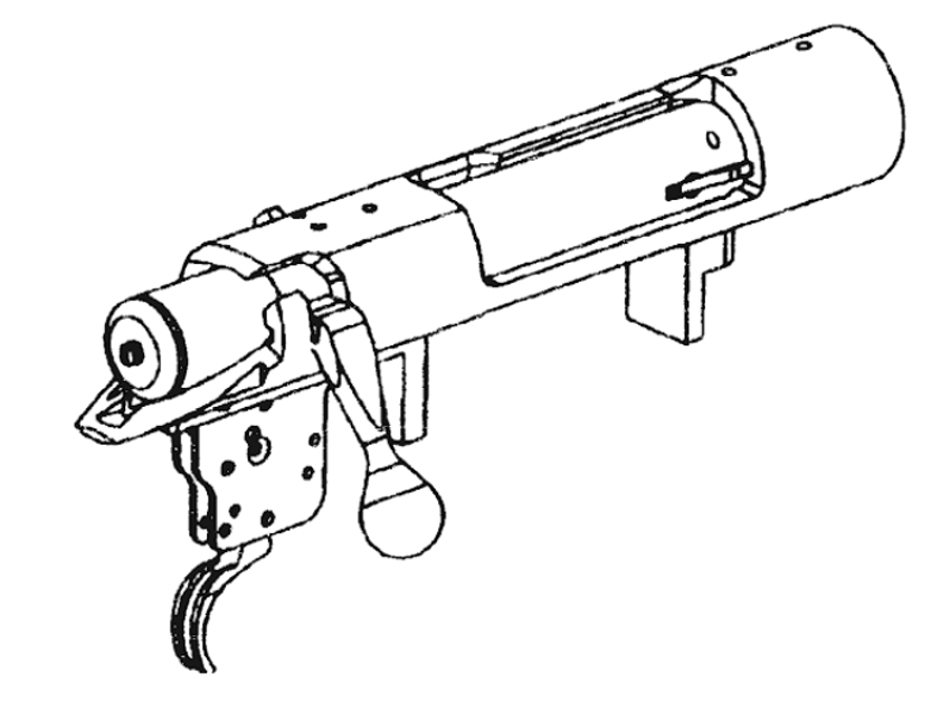 Action of the production model of the TarHunt bolt-action. The modern production action is controlled feed and rear locking with two lugs. (Picture courtesy “Bolt Action Rifles” by Wayne Zwoll).

Randy Fritz had made friends with a number of high profile people involved in the accuracy rifle business, including Gale McMillan of McMillan rifles – one of the most famous and respected makers of accuracy rifle barrels in the world. With involvement from both Gale McMillan and his son Rock the “shrifle” was developed until it became a true minute of angle tack driver, and equal of most hunting rifles. The new gun was called an RSG (Rifled Slug Gun) and when the TarHunt RSG-12 proved capable of delivering 1″ groups at 100 yards it was declared to be “one of the fifty best gun designs” by Field and Stream magazine. 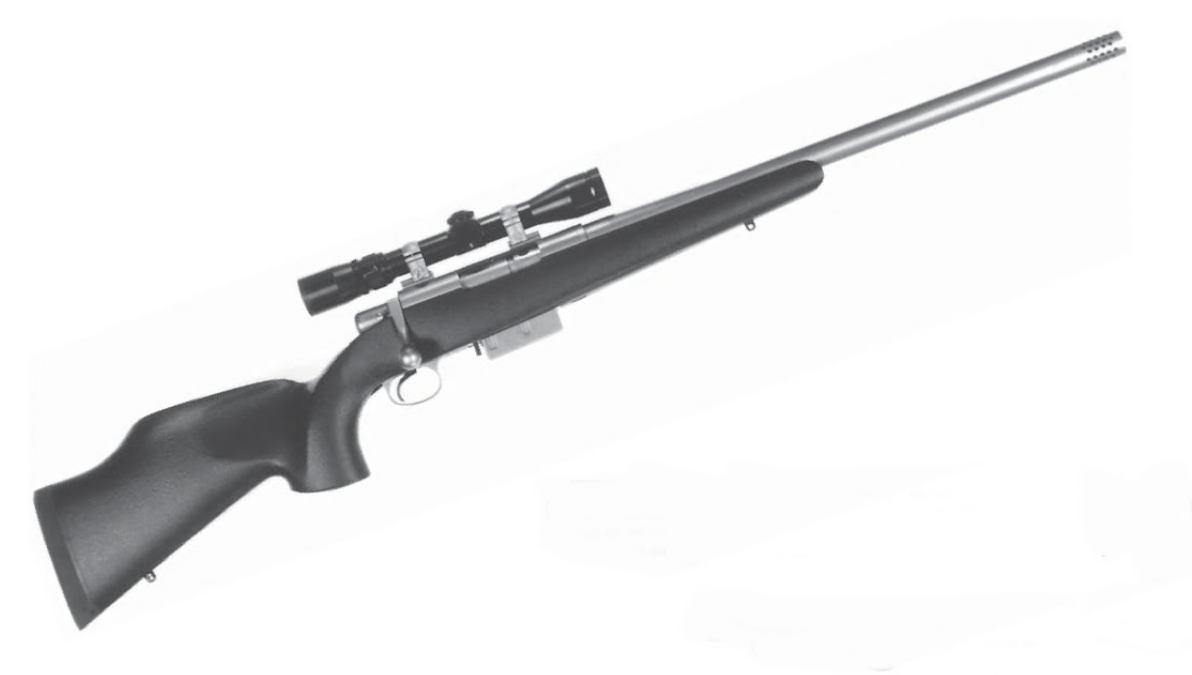 The early model TarHunt RSG-12. Note the two round magazine protruding from the bottom of the action. The later RSG-12 that were made from 2000 onwards were fitted with a one shot magazine to provide a flat blind floor that makes the gun more comfortable to carry. (Picture courtesy “Bolt Action Rifles” by Wayne Zwoll).

(Note: you can purchase the book “Bolt Action Rifles” by Wayne Zwoll at Amazon if you click here).

The RSG-12 was followed by the RSG-16 in early 2000. Both these guns were made using custom rifle grade parts and construction methods and so they were, and are, priced accordingly. The TarHunt guns were not created to be inexpensive mass production guns, but to be top-shelf custom guns. However, in order to provide much improved accuracy at mass produced gun prices TarHunt introduced their DSG-12 (Designated Slug Gun). This was a modified Remington 870 pump action (i.e. The customer supplies the Remington 870 pump gun, then TarHunt do the conversion on it). This involves the fitting of a fixed (i.e. non-removable, except by a gunsmith) rifled barrel of 0.850″ muzzle diameter, with a barrel stabilizer and muzzle brake, and re-worked trigger. The owner can then fit the rifle-scope and mounts of their choice.

The TarHunt DSG-12 requires the customer to provide a suitable Remington 870 pump action which they modify to turn it into an accurate slug gun. (Picture courtesy TarHunt).

The TarHunt custom rifles are the Envy RSG-12 and RSG-20 Stainlesss, RSG-12 Professional Stainless, RSG-20 Mountaineer Stainless, and a range of Remington 870 conversions.

The TarHunt Envy RSG-12 and RSG-20 are the top of the line custom guns. (Picture courtesy TarHunt).

The Envy is the top of the line model of the RSG-12 and RSG-20. The gun is available with a fine wood stock with pistol-grip and fore-end checkering, and with a Decelerator recoil pad. The action is glass bedded into the stock in best benchrest rifle style. The standard trigger is the Jewell with a 2½lb pull weight. The gun uses the RSG controlled feed action and the magazine allows the gun to hold two shots: one in the chamber and one in the magazine. Options included a fluted bolt, a fluted barrel (Pictured above), and for the Envy RSG-20 the Envy Schrifle chamber.

Barrel has a 1 in 23″ twist rate and its length is 23″. The barrel is equipped with a muzzle brake as standard.

Retail price at time of publication was listed as USD$6,295.00

You will find the TarHunt page for the Envy RSG-12 and RSG-20 if you click here.

The RSG-12 is similar in specification to the Envy but with a black McMillan fiberglass stock fitted with a Pachmayr Decelerator recoil pad. The rifle is stainless steel which can be had either in bright stainless or blackened non-reflective finish. The barrel is an E.R. Shaw Stainless Steel barrel with muzzle-brake. The action is glass-bedded and the barrel free floating. The standard trigger is the Jewel with a 2½lb pull weight.

The action is drilled and tapped for standard Leupold or Weaver bases for rifle-scope mounting.

Retail price at time of publication was listed as USD$3,495.00

You will find the TarHunt page for the RSG-12 Professional Stainless if you click here.

The RSG-20 Mountaineer Stainless is similar to the RSG-12 except in 20 Gauge. The model features a muzzle-brake and the 2½lb custom Jewell trigger as standard equipment. The gun is fitted with an E.R. Shaw Stainless Steel barrel with satin finish and the barrel is free-floating. The action is glass-bedded and drilled and tapped for standard Leupold or Weaver bases.

There are a number of options for the RSG-20 including the use of the “20 gauge Schrifle Chamber” as an additional cost extra.

You will find the TarHunt page for the RSG-20 Mountaineer Stainless if you click here. 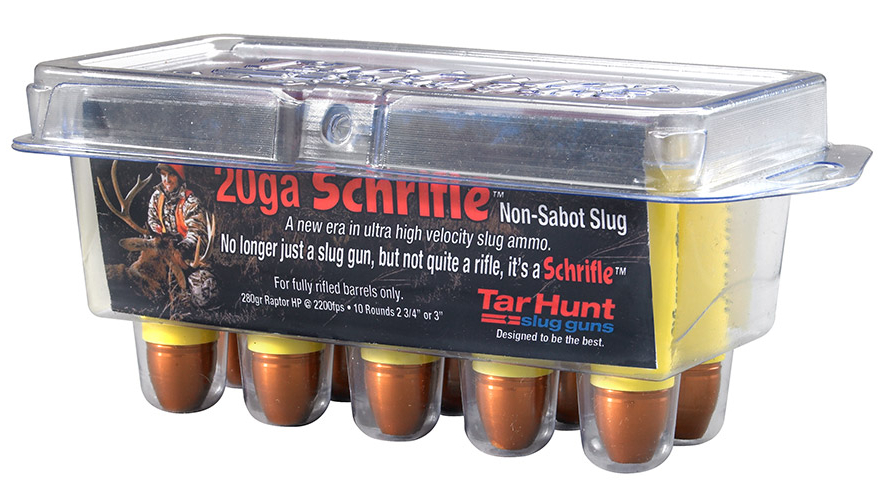 The Schrifle 20 gauge shotgun slugs are made for the special Schrifle chamber and are a non-sabot slug. (Picture courtesy TarHunt).

TarHunt do conversions on customer supplied Remington 870 shotguns, and their listed versions are the:-

The prices of these conversions ranged from USD$1095.00 to $1,325.00 at time of publication. Click each of the links above to visit the relevant page on the TarHunt website.

Randy Fritz vision for TarHunt was born out of three short years of frustration using the smoothbore slug guns of the 1960’s and 1970’s. He became a rifle accuracy aficionado and then, almost by accident, got into building a shotgun that was at least as accurate as a rifle. Although to some this might have seemed a strange idea, yet this has been a wonderful accomplishment benefiting those who live in places where it is required that a hunter uses a shotgun, and benefiting those who hunt in more settled areas where using something like a 7mm Remington Magnum would be greatly frowned upon. Whether you are more interested in the highly accurate bolt-action guns from TarHunt or their Remington 870 conversions these are imaginative and practical guns.

If however you head to New Zealand for a “Tahr Hunt” then we suggest that you take your 7mm Remington Magnum or .300 Winchester Magnum and high ballistic coefficient bullets along, as the shot may have to be taken out as far as half a kilometer, and you’ll need all the help you can get in dealing with the wind drift and the trajectory path.

But for the woods, out as far as 200 yards, a TarHunt RSG shotgun might just be perfect.

Mountaineer RSG-20 with a stock colored especially for the ladies. (Picture courtesy TarHunt).