Sometimes we come across an artifact and we think it would be just so interesting if that item could talk and tell us the stories from its history. The Mauser Bolo Broomhandle pistol we are featuring is one of those items. It comes complete with leather holster and a set of memorabilia from China complete with a China War Memorial Medal. This looks to be a gun with some stories to tell.

The Mauser Model of 1896 known as the Mauser C96 (i.e. Construktion 96), otherwise known as the broomhandle because of the shape of its grip, was Winston Churchill’s favourite pistol in his early years in the military although once he discovered Colt’s M1911 he purchased one in London in 1916 and had a holster custom made for it to fit his Sam Brown belt. At that time he was taking up command of the 6th Battalion, Royal Scots Fusiliers in front line service during World War I and that was the handgun that went to the front with him. That pistol was possibly not chambered for the .45ACP but may have been one of the rare Colt M1911’s chambered for the British .455 Automatic cartridge as was used in the Webley Automatic pistol and in the specially made Colt 1911’s used by British forces personnel. Notwithstanding that before the advent of the Colt M1911 the Mauser C96 was a handgun of choice for military personnel such as Winston Churchill and T.E. Lawrence who is otherwise known as “Lawrence of Arabia” and it found its way into the major trouble spots of the turn of the century, Russia, Asia and China especially being places where the Mauser C96 was used and where many unlicensed copies were made. There were even copies made in .45ACP. 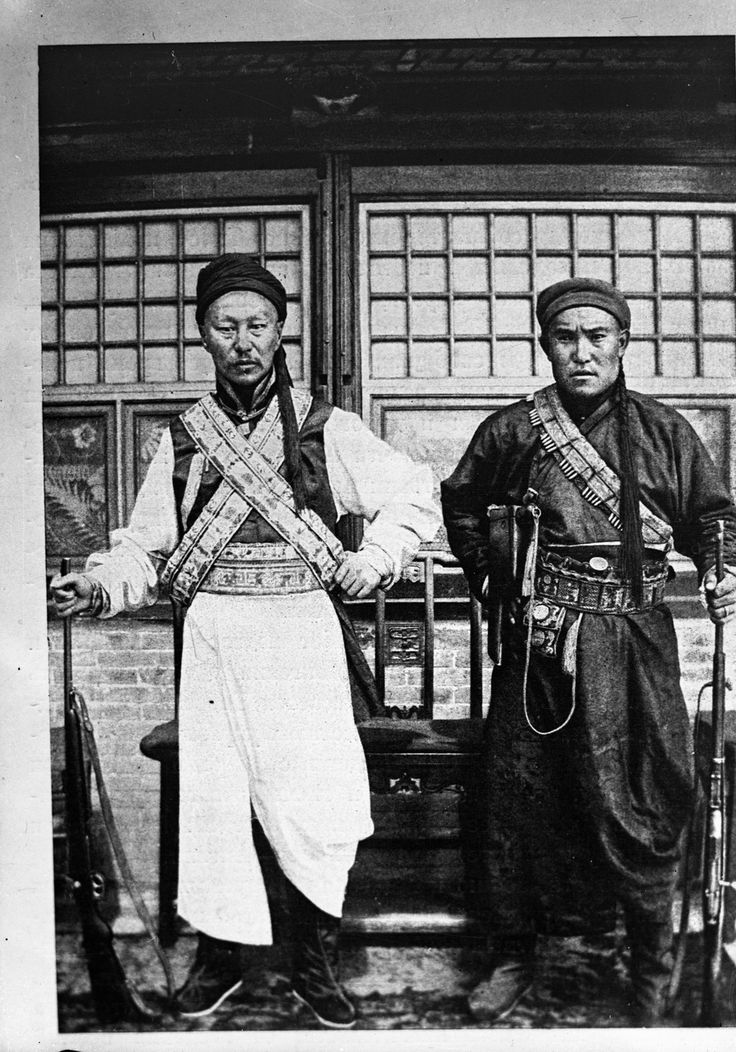 Armed Chinese, the gentleman on the right has a Mauser C96 in the wooden holster that doubled as an attachable shoulder stock. (Picture courtesy the British Library).

The “Bolo” Mauser is the short barreled (i.e. 3.9″/99mm barrel) version of the original C96. These pistols were made in large numbers for the new Bolshevik government of Soviet Russia and the name “Bolo” came from the word Bolshevik. The Bolo Mauser is correctly known as the M1921 and they were made during the 1920’s. The pistol we are featuring is one of those and chambered for the 7.63x25mm Mauser cartridge. This cartridge is not to be confused with the 7.65 Parabellum. The 7.63x25mm is almost identical with the 7.62x25mm Tokarev and the two cartridges are considered to be interchangeable. So if you have a Mauser C96 Bolo you can get ammunition that will safely work in it and you can use 7.62x25mm Tokarev reloading data (information sourced from the Lyman Reloading Handbook 49th Edition). The 7.63x25mm Mauser cartridge was the highest velocity pistol cartridge in the world prior to the creation of the .357 Magnum.

This period of history that gives us the Mauser C96 is the period that takes in the Russian revolutions and World War I, pivotal times that shaped the world we now live in. Mauser C96 pistols were made in vast numbers and were very much a part of the events of those turbulent times. 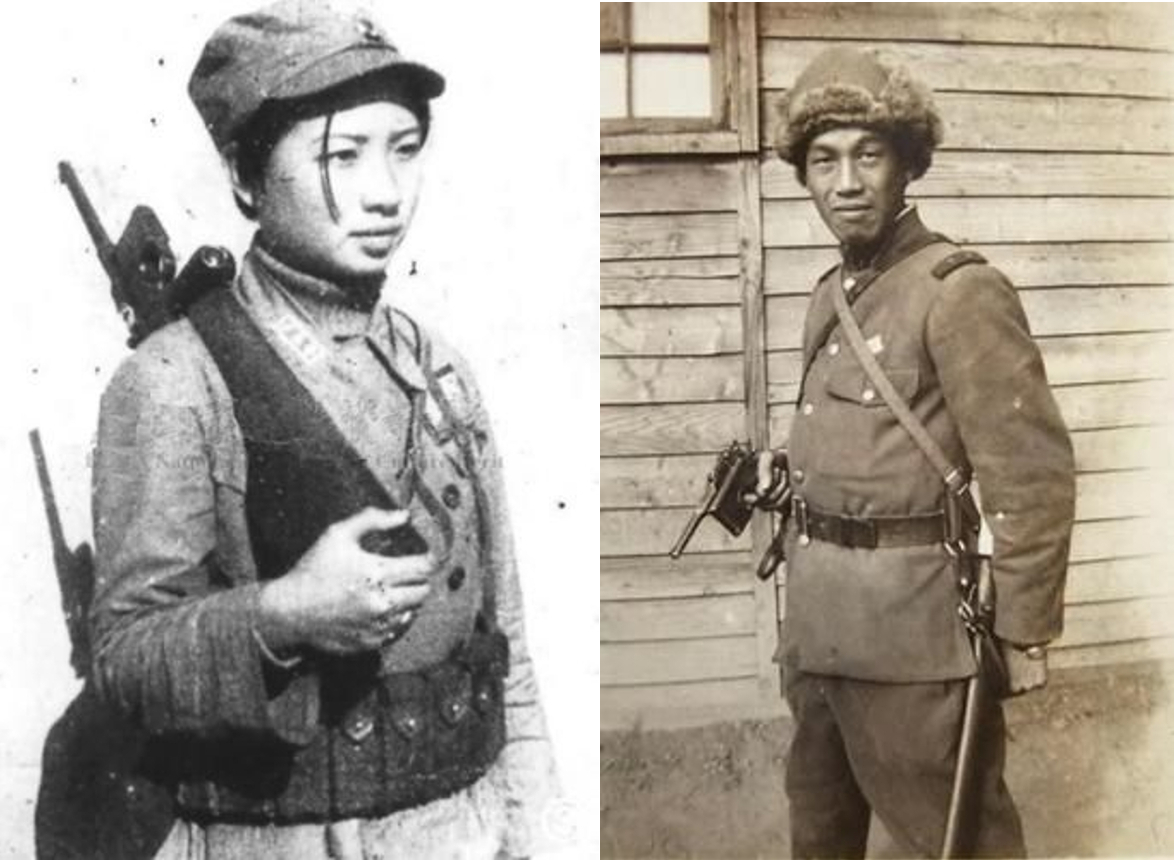 Foes of the war between China and Japan that preceded World War II; Chinese guerrilla on the left and Japanese officer on the right. The Japanese officer appears to have a Bolo Mauser which may have been a souvenir of the Russo-Japanese War of 1904-5. The Chinese woman’s pistol may be one of the long barreled Bolo Broomhandle pistols in 7.63x25mm Mauser that were also made.

In China the Mauser C96 was called the “box cannon” (Chinese: 盒子炮; pinyin: hézipào), the Chinese word for gun or cannon being “pào” for the “pow” sound the gun makes.

The Mauser C96 is a complex pistol, complex to machine, and complex to field strip. Compare the following video with the process for field stripping a Colt M1911 and you will immediately understand why Winston Churchill was wise to swap his C96 for an M1911 before heading to the front in 1916.


In operation the C96 is a locked breech short recoil operated automatic pistol. On firing the barrel and bolt are locked together by two locking lugs on the underside and recoil a short distance together. As they recoil the lugs are released from their lock position and brought down out of engagement allowing the bolt to continue to travel backwards to battery compressing the main spring and cocking the hammer. Spring pressure then forces the bolt forwards and it strips a new cartridge from the magazine and pushes the barrel forward so that the locking lugs are forced up into locking position again.

The following video demonstrates this with illustrations. A picture is worth a thousand words.


The C96 was a top loading handgun with a fixed magazine in its first iterations. Although six, ten and twenty round magazines were tried the design settled on a ten round box magazine which could be loaded either by individual cartridges or by a stripper clip, much like a Mauser 98 bolt action military rifle.

Use of the stripper clip to load and also attachment of the shoulder stock are demonstrated in the following video.


The Bolo Mauser Broomhandle pistol we are featuring is coming up for auction by Rock Island Auction February 25 – 28, 2016. Estimated selling price is in the order of USD$800-$1200.

You will find the Rock Island Auction page for this handgun if you click here. 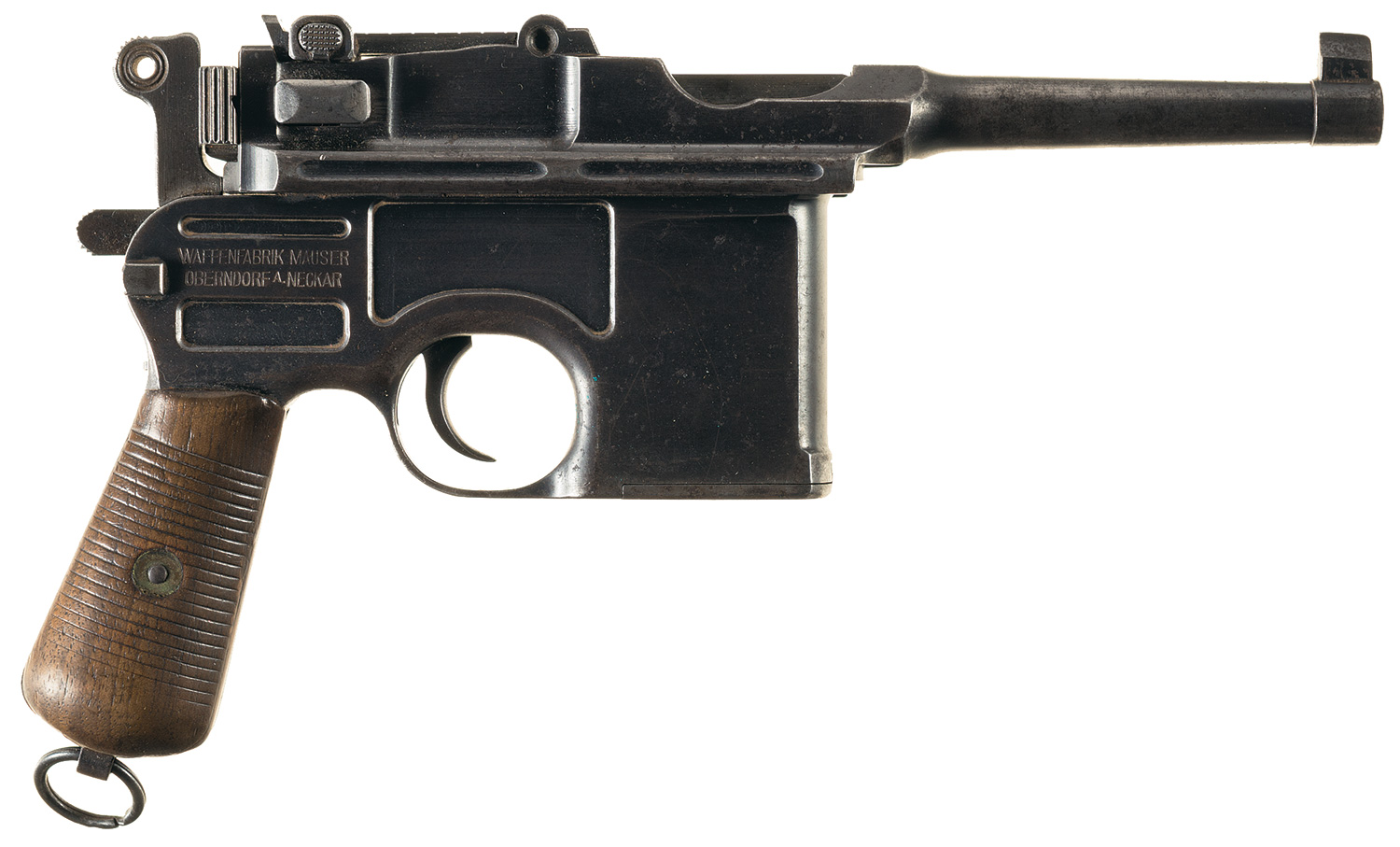 This Bolo Mauser has its original bluing and is describes as being in very good condition with all original parts. (Picture courtesy Rock Island Auction).

The pistol also comes with an intriguing assortment of associated souvenirs from military service in China. 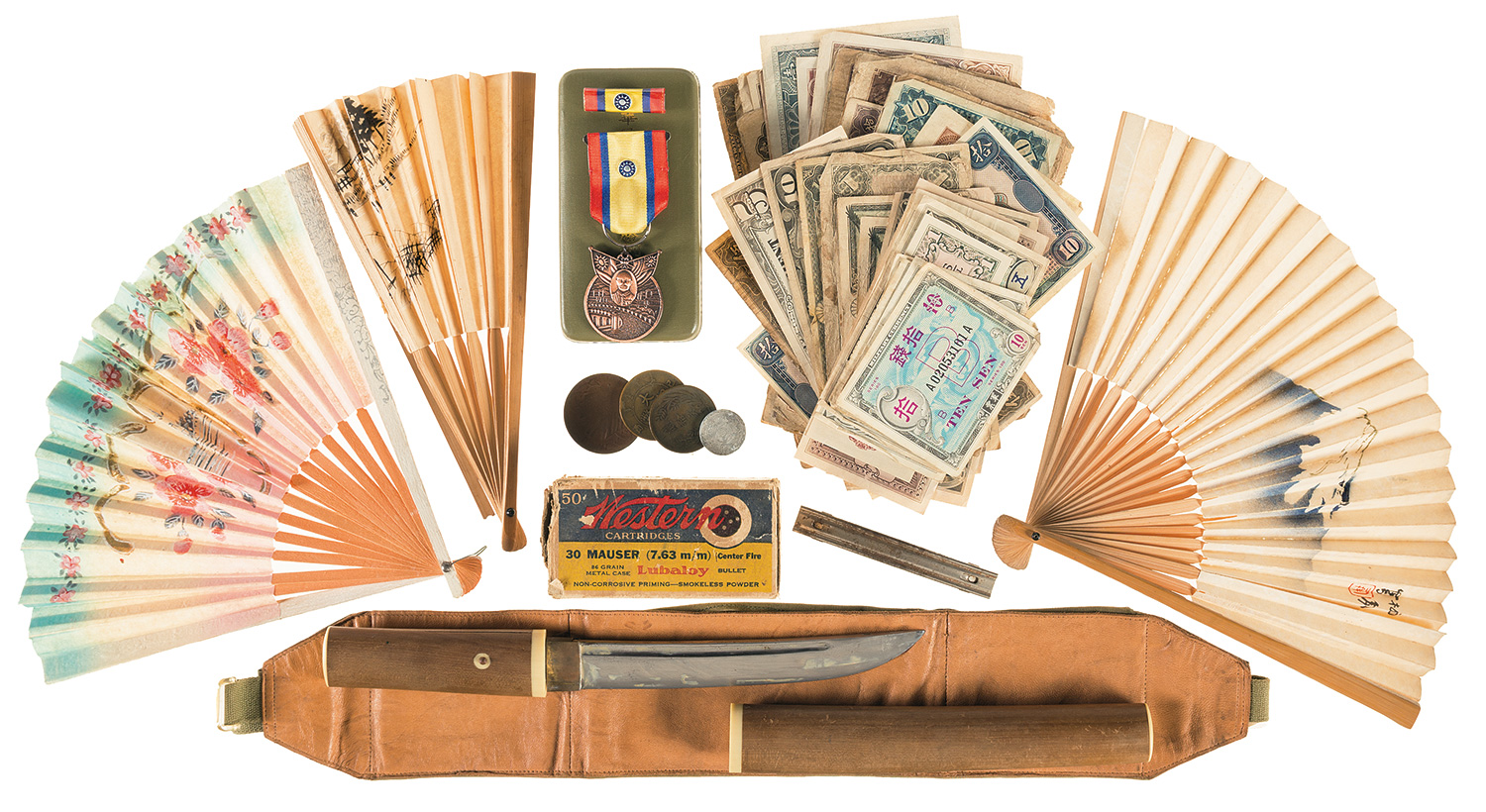 The items included with the pistol include fans, a China War Memorial medal, stripper clip and a pack of 7.63x25mm Mauser cartridges, some money from the period, and a Japanese tanto (knife) which is unsigned and which may be hand made or may be mass produced as were many lower ranking Japanese officer’s swords during the Second World War.

These items give this pistol a story to tell. Sadly it can’t tell us its story. But there is enough inspiration in this pistol and its assorted collection of souvenirs to create a movie script.

For those interested in learning more about the Mauser C96 there are some excellent books on Amazon if you click here.

And there is a nice Umarex blowback air gun replica of the C96 if you click here.