When I began competitive pistol shooting in the early seventies the name Margolin was renowned as one of the best choices you could make for your Olympic Rapid Fire pistol and for your pistol for the Standard Pistol Match. There were three competitive choices at that time for Olympic Rapid fire, the Margolin MTsU, the Walther OSP, and the Hammerli. The Margolin hailed from the USSR’s Tula works and pistols from there may be found branded with the Baikal or Vostock names. What most people didn’t know about the Margolin was that its designer, Mikhail Margolin, had been blinded during the Russian Civil War in 1922 and had accomplished the feat of becoming a firearms designer after he had been blinded. 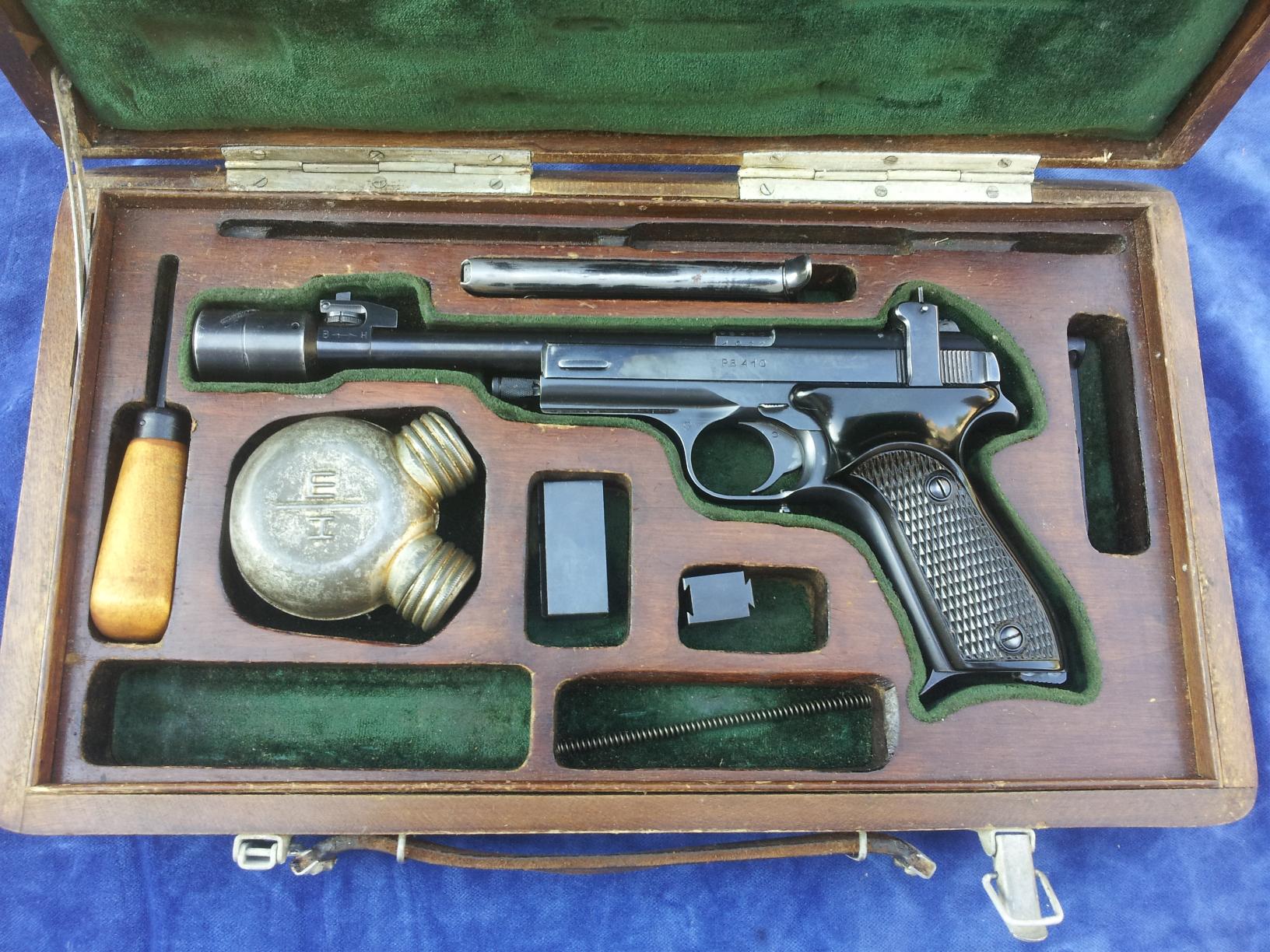 The Russian target pistols such as the Margolin MCM were usually presented in a fitted wooden box complete with accessories. (Picture courtesy wapenhandelwagemakers.nl).

The young Mikhail Margolin had managed to get three years of formal education prior to the outbreak of the Russian Civil War and even as a teenager had been fascinated by firearms and their designs. He had been a lathe operator’s assistant at the age of nineteen. In his military service he had served in the Black Sea and had been in charge of a platoon. It was during that time he was able to handle and examine various firearms including pistols American manufacturers such as Smith and Wesson in addition to the Russian Nagant revolver. 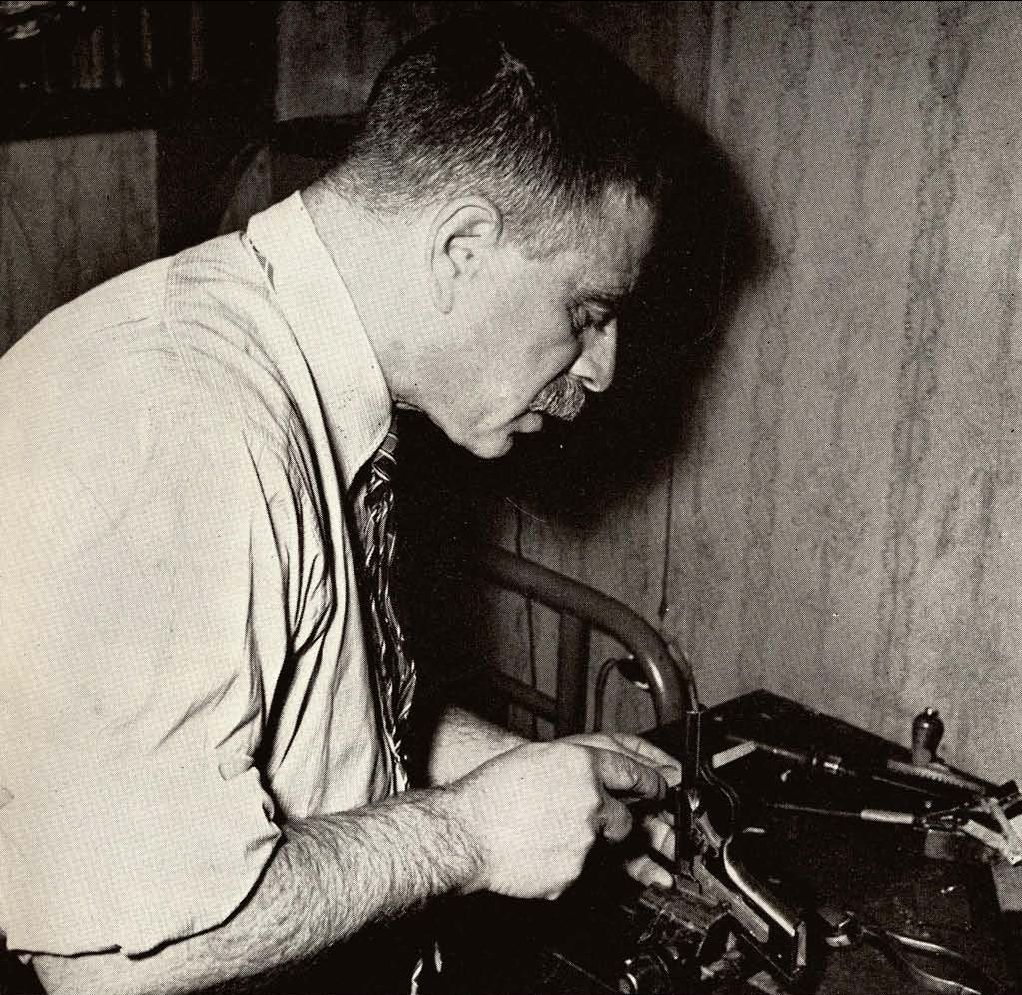 Mikhail Margolin in his workshop working on a pistol. (Picture courtesy toyfj40.freeshell.org and a Guns Magazine’s 1958 issue).

After he lost his sight Mikhail Margolin made a solid effort at getting the education he would need to be a firearms engineer. He learned Braille, and with the help of friends he learned the relevant mathematics, and his wife read to him from books on firearms so he developed a theoretical knowledge. In addition to this he began collecting firearms and practiced taking them apart and putting them back together – all by touch. But he found being blinded to be depressing to the point where he went to a sanitarium for a break and refreshment. Whilst there he was introduced to plasticine and clay modeling. It was a revelation and it was a short jump from there to modeling with wood and cardboard parts fixed by nails to model firearm parts, and then to having a vise and working with metals such as aluminium. 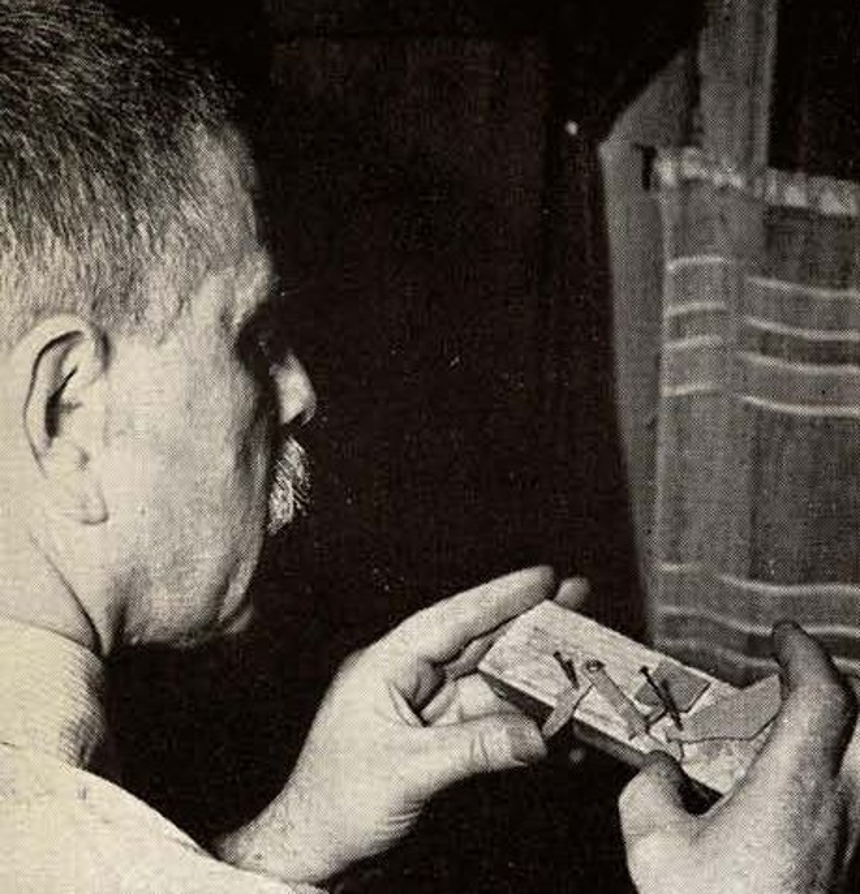 Eventually Mikhail Margolin was offered a job at the Tula arms factory. There he was given every assistance so he could design and communicate his designs. He was not able to actually draw his designs, he had to use models and descriptions so that his assistants could put his ideas onto paper and the designs brought into production.

At first Margolin worked on a semi-automatic .22 rimfire rifle and on a .22 rimfire version of the Soviet Degtarev drum-fed sub-machine gun. This included the creation of magazines that would feed reliably, the largest being a 35 round magazine. But Margolin’s real interest was in the creation of a sport pistol, a target pistol and once he was given the go ahead he began work on that project beginning with a design based on the Tokarev. World War II intervened however and Margolin worked on other projects for the war effort until at the end of the war he was able to return to his target pistol project. By this time he had a few years to think about the design and he discarded his original Tokarev based design and created something completely new. This was the MCM pistol and it was completed in 1948. 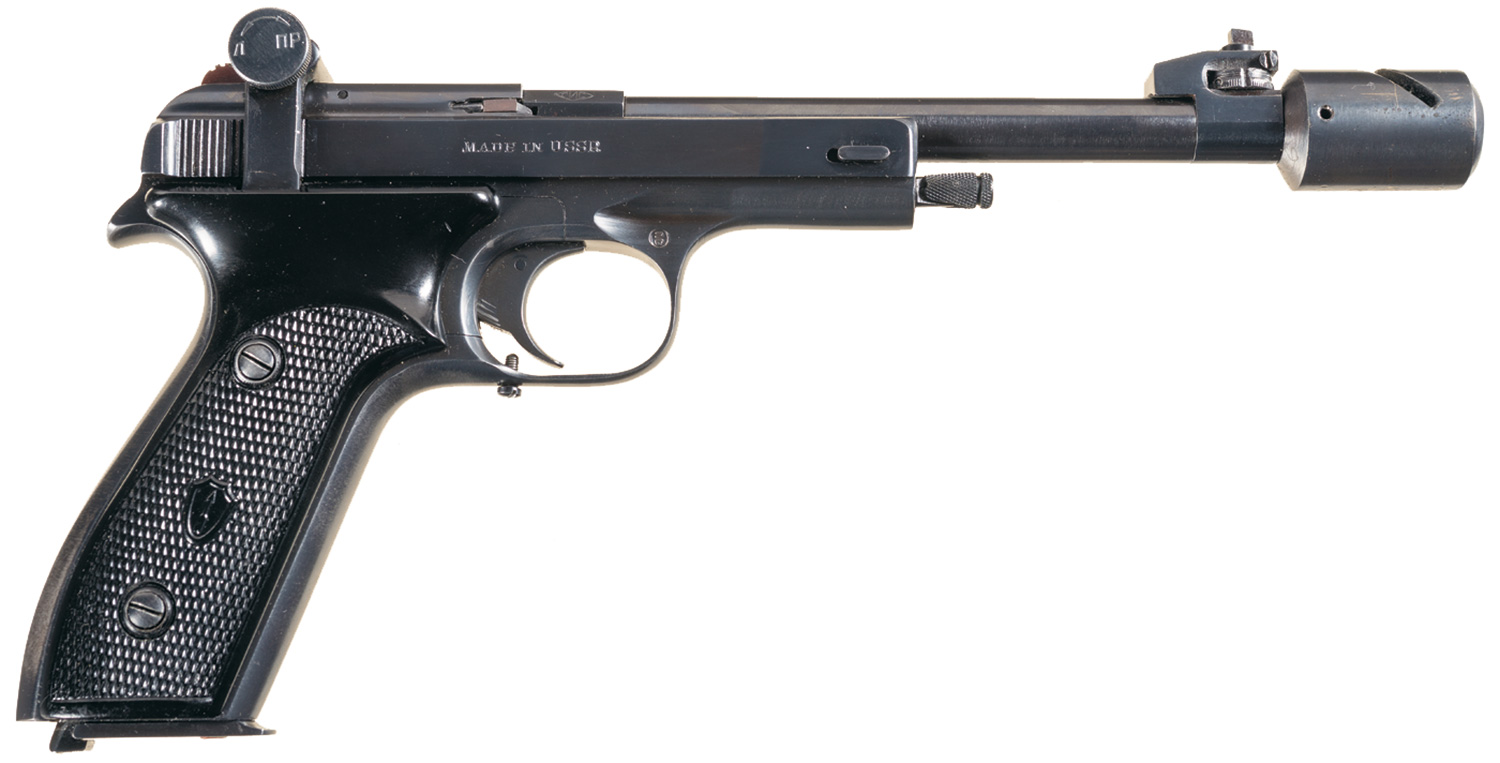 Margolin’s MTsU Olympic Rapid Fire pistol has a number of features that were new thinking back in the post war world of Olympic pistol shooting. The drum sights are micrometer adjustable both front and rear, and are intentionally mounted a little high on the action so as to cause the shooter to position the pistol in such a way that the recoil comes straight back on the line of his/her arm. The rear sight is not fixed to the slide but to the frame and is thus unaffected by the movement of the slide. The recoil spring sits underneath the barrel in a guide rod and at the muzzle of the barrel there is a compensator to both add weight to the muzzle and to release the muzzle blast gases upward and rearward to reduce muzzle flip as near to zero as possible. The pistol has a reputation for accuracy and reliability second to none of its contemporaries. This pistol in the hands of Soviet shooters earned the Soviet Union Gold the ISSF World Championships when they made their competitive debut in 1954. The pistols had made their mark and many serious competitive shooters sought to acquire one.

Amongst the most famous pistol shooters who upgraded to the Margolin MTsU was Hungarian Károly Takács who had already overcome the odds and had won an Olympic Gold Medal at both the 1948 and 1952 Olympic Games in the 25metre Rapid Fire Match. Károly Takács is not only legendary because he managed to win the 25metre Rapid Fire Gold Medal at two consecutive Olympic Games but also because he had originally been a right handed shooter, but had suffered severe injuries to his right hand during his military service. No longer able to shoot with his right hand Károly Takács secretly trained to use his left hand. When he was presented with his gold medal at the 1948 Olympics he astonished the crowd by producing a prepared victory speech from his pocket. 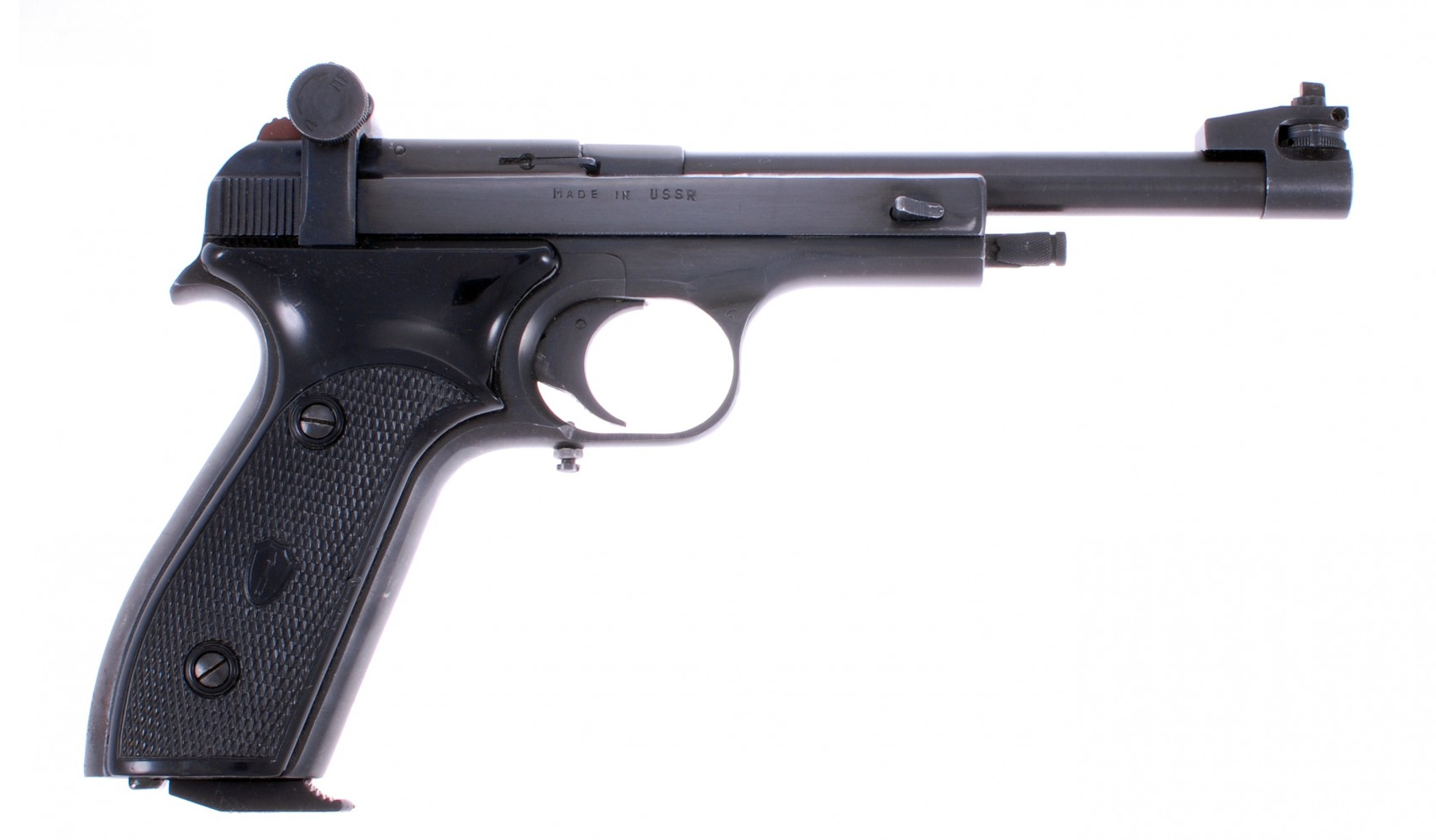 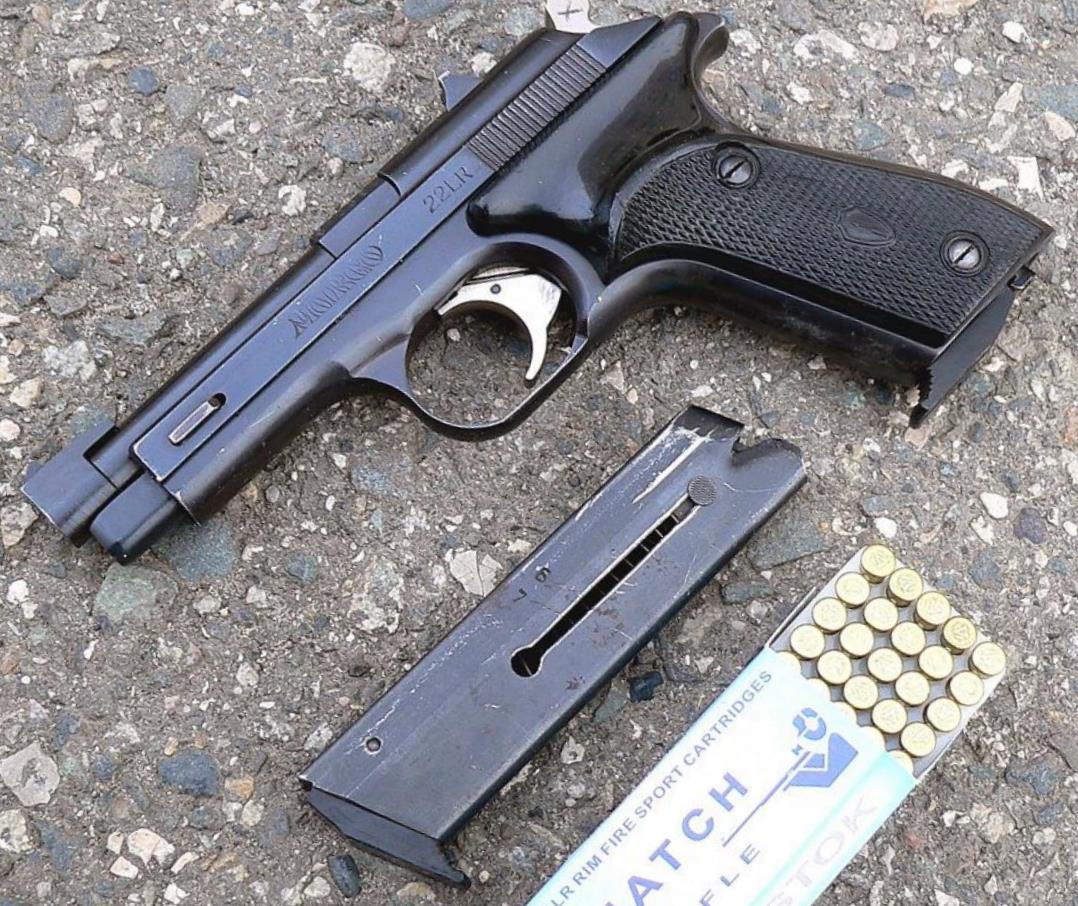 The Baikal Margo version of the Margolin is for informal target shooting and can be used as a self-defense pistol. Magazine capacity is ten rounds. (Picture courtesy historiadelasarmasdefuego.blogspot.com_.au)

These pistols, the Margolin MCM, MTsU, Margo and MP-449 are the firearms that Mikhail Margolin is most remembered for. However he created one more pistol that took the shooting sports by storm. In fact it created such a storm when it debuted at the 1956 Melbourne, Australia Olympic Games that the controlling body changed the rules for the 25metre Rapid Fire Match after those games so Margolin’s new design could not be used. This controversial pistol was the MTsZ-1. To create it Mikhail Margolin literally turned his auto-loading pistol design upside down. 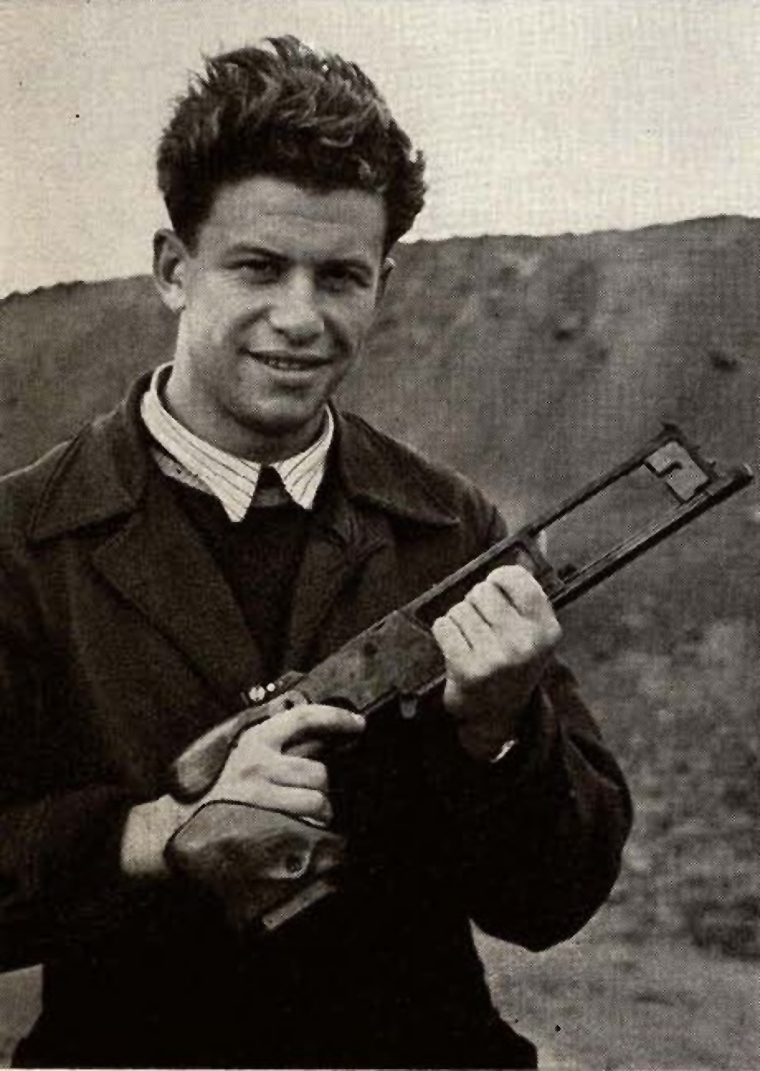 Mikhail Margolin, although initially discouraged by becoming blind did not allow that to end his productive life. Instead, despite the learning curve and the enormous difficulties he faced he went on to become one of the most influential designers of competitive pistols in the world. Likewise, one man who used one of Margolin’s pistols, Hungarian Olympian Károly Takács went through the loss of the use of his right hand and trained to use his left to win gold at the Olympics not just once, but twice in succession. When we face difficulties and trials we will do well to remember these two men and remember that trials produce endurance, endurance produces patience, and patience produces character.

If you have a Margolin pistol you will find a manual for it in downloadable PDF format if you click here.

There is video below demonstrating how to field strip and re-assemble the pistol.

(Feature image at the head of this post courtesy wapenhandelwagemakers.nl)