BMW’s first venture into motorcycle manufacture was with their tube framed R32, R42, and R52 series (See our Revivaler post on these bikes here). Tube frames proved to be fine for motorcycle construction but BMW had entered into motor car manufacturing with their acquisition of Automobilewerk Eisenach who were making British Austin Seven based automobiles under license. Automobilewerk Eisenach had pressed steel manufacturing expertise and capability and so BMW engineers decided to use that pressed steel expertise in creating a range of motorcycles with pressed steel frames. 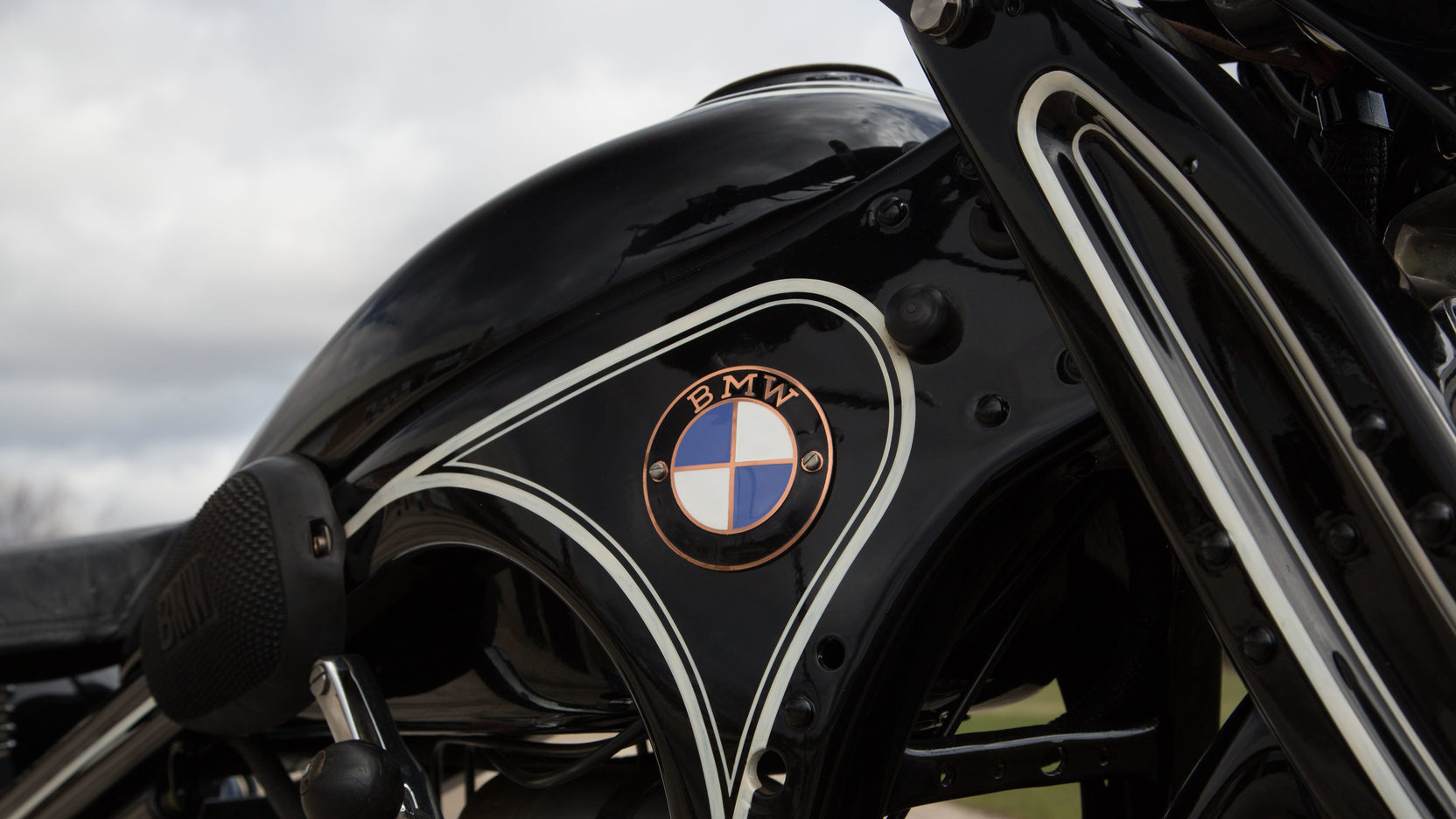 The pressed steel frame of the BMW R16 is stiff, light and gives the bike a distinctive “Art Deco” appearance.

Just as in car production the use of a pressed steel frame proved to work very well for motorcycles. The pressed steel construction allowed the creation of a frame that was lightweight yet stiff and structurally sound. It also created an “Art Deco” appearance for the motorcycle which made it look “Roaring Twenties Modern”. Pressed steel frames and chassis were being used to reduce weight and increase structural strength in cars, trucks and agricultural machines (such as the American Rumley Oil Pull tractors and traction engines) and now BMW successfully applied the technology to motorcycle construction. The added advantage of pressed steel construction was the ease with which it enabled mass production. 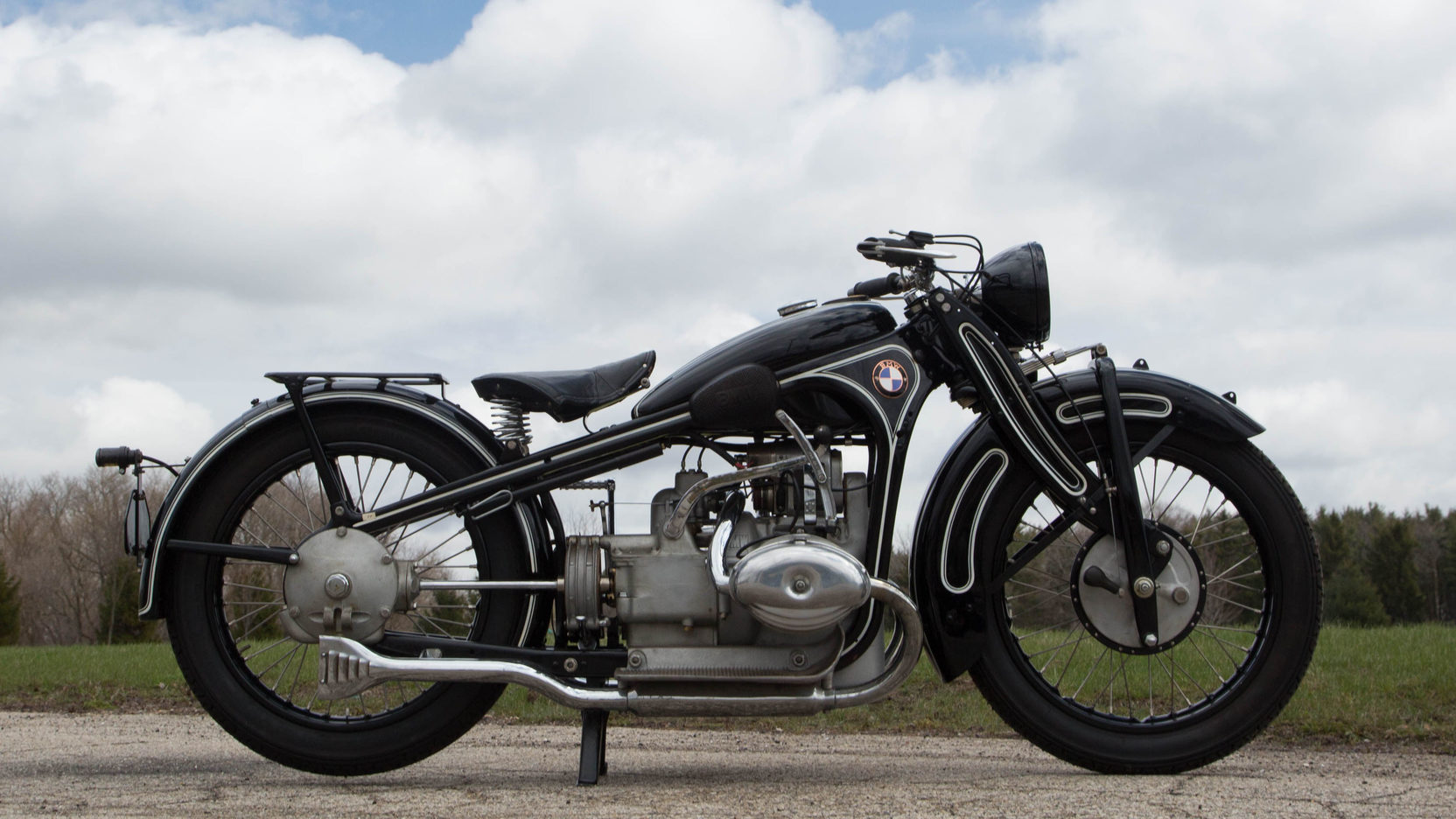 If you compare the design and construction of the BMW R16 with its pressed steel frame with the R52 with its tubular frame the design similarities will become obvious.

As they moved into the late 1920’s BMW were producing their R32,R42 and R52 series motorcycles and they introduced their 750cc (actually 745cc) horizontally opposed engine as an option on the R52 in 1928. In creating the new R11 and R16 bikes BMW basically took the engine and transmission of the R52 and put it into the pressed steel frame of the new R11 and R16 bikes which entered production in 1929. The new R11 and R16 even had the rear drive-shaft brake of the earlier R52 despite its being a weak brake that works more efficiently than a brick tied to a length of string but still only really causes the bike to lose momentum rather than decisively stopping it. The front drum brake provides the real stopping power. 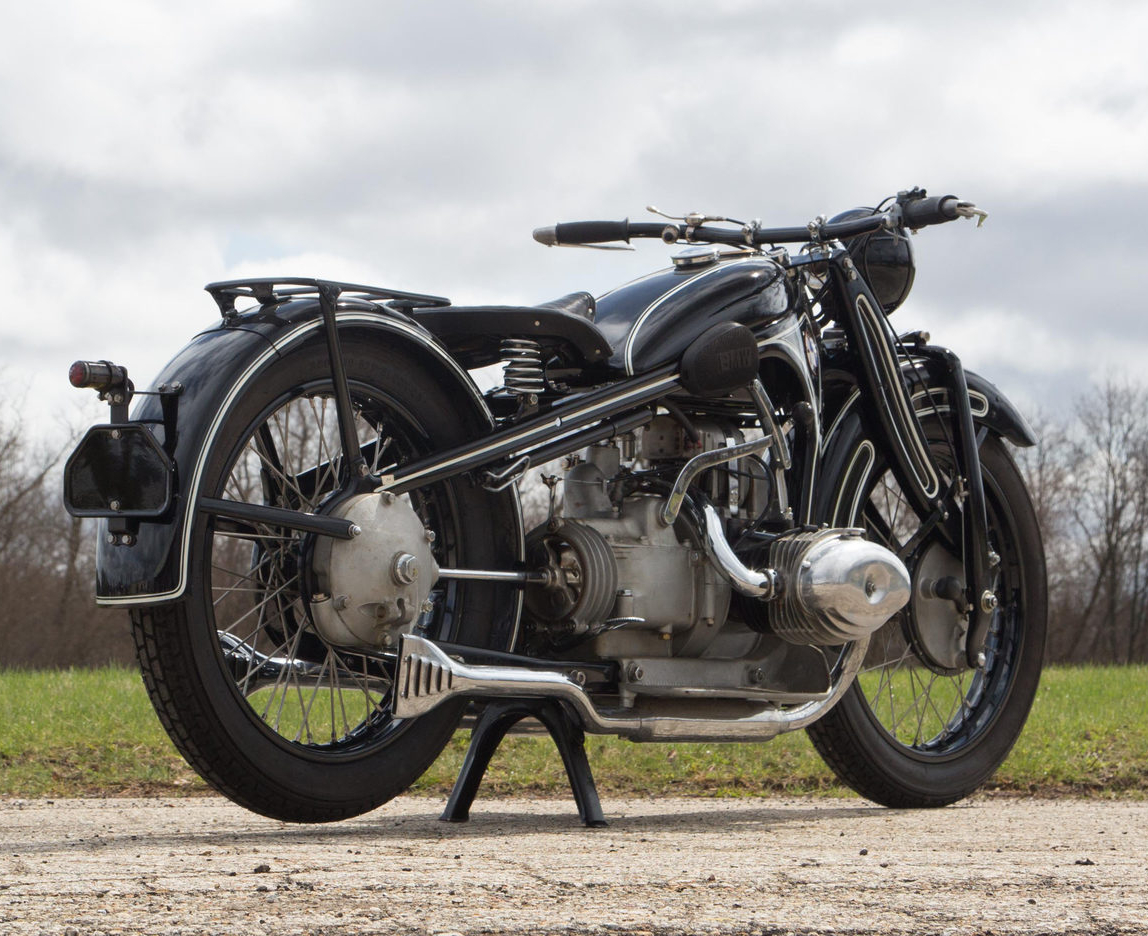 The R11 and R16 have the same engine and transmission of the 750cc R52. The rear brake mounted on the drive-shaft is visible in this picture.

The R11 and R16 are two variants of the same bike. The R11 being the “toermotor” (touring bike) and the R16 being the “sportmotor” (sports bike). The R11 would be the father of the later R12 whilst the R16 would later be the ancestor of the R17.

As BMW’s sports-bike the R16 was the top of the range motorcycle for BMW and was a highly capable machine with a top speed around 90mph. With an engine that had its ancestry in an aircraft engine design the bike already had a bit of an aviation look about it and the use of the pressed steel frame accentuated that impression nicely. The BMW paintwork with the black bike decorated with white pin-striping enhanced its appearance even more. But the appearance was not the only thing the BMW R16 had going for it. Starting the bike’s engine produces a loud and purposeful engine note that gets attention straight away. The front suspension by pressed steel trailing link leaf spring girder fork aids in giving the motorcycle stability and predictable handling even at speed. You’ll find a rider’s impression of the BMW R16 at “The Vintagent” web-site if you click here. 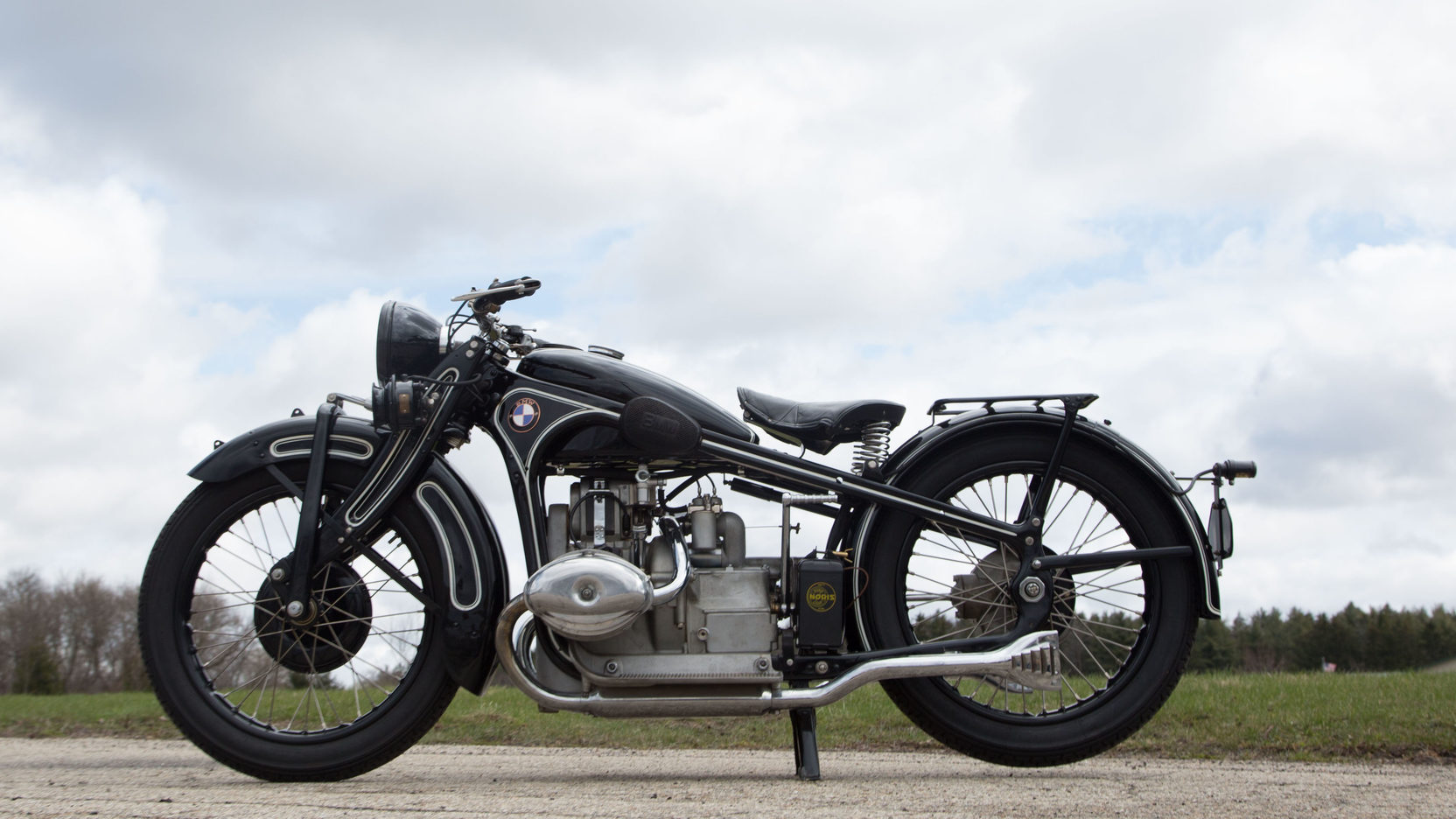 The BMW R16 is a modern looking motorcycle despite the fact that it was designed and made between 1929-1934. Note the unusual kick starter located at the rear of the gearbox, the same as on the earlier R52.

The 1931 BMW R16 Series II in our pictures is coming up for sale by Mecum Auctions at their Las Vegas auction to be held between January 25th-28th. The Series II R16’s have a rounded-back Bosch headlamp, wider 4-rib rear brake shoes, a stronger clutch thrust bearing, and an extra bearing in the rear wheel.

Known for their reliability and performance these BMW motorcycles set a standard that was hard to beat and the successors of the R11 and R16 were copied by the American Government when they were so impressed by how the military BMW motorcycles performed in North Africa that they asked Harley-Davidson and Indian to make similar bikes. Not only that but the Soviets were also impressed and that led to the creation of the Ural motorcycles. The BMW R16 is a fascinating vintage motorcycle that is arguably more fun than a lot of modern bikes to ride and to own. They have a character all their own. 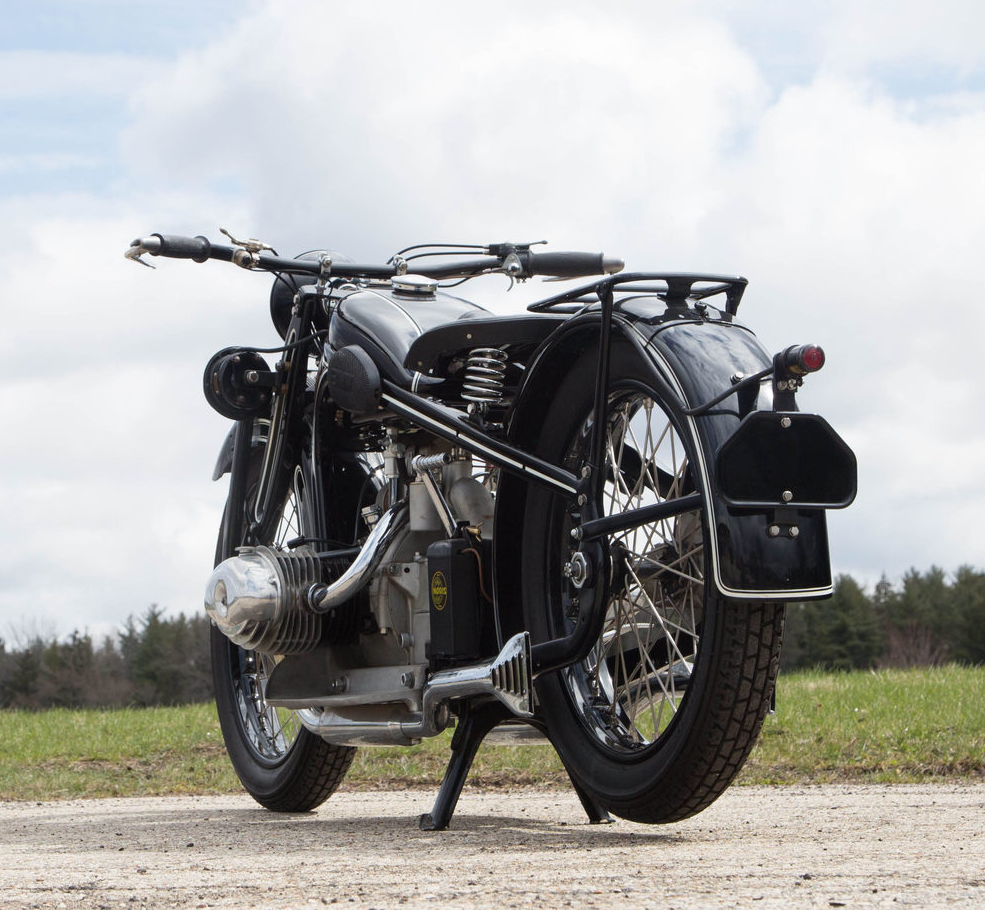