The High Standard Supermatic pistols were amongst the best American made .22 rimfire as evidenced by the fact that they have been the only American made pistols to win gold medals in the Olympic Rapid Fire match, first in 1952 and again in 1960. My own experience with these was as a pistol club armorer many years ago when I had both an Olympic Citation and a Supermatic in my care. The Olympic Citation was made chambered for the .22 Short cartridge and featured a special barrel fitted with movable weights and a muzzle brake to minimize muzzle flip. As I recall this pistol had the older style “slant” grip which provided a greater grip angle which kept the top of the shooter’s wrist and hand in flat alignment enabling an excellent and instinctive grip. It was a pistol that not only pointed instinctively but one that remained rock steady as it was fired making the Olympic Rapid Fire match as easy as it can be made to be. The Supermatic was set up for the ISSF Standard Pistol Match with a bull barrel and regulation 1,000gram trigger pull. This one had the later Colt 1911 style grip. 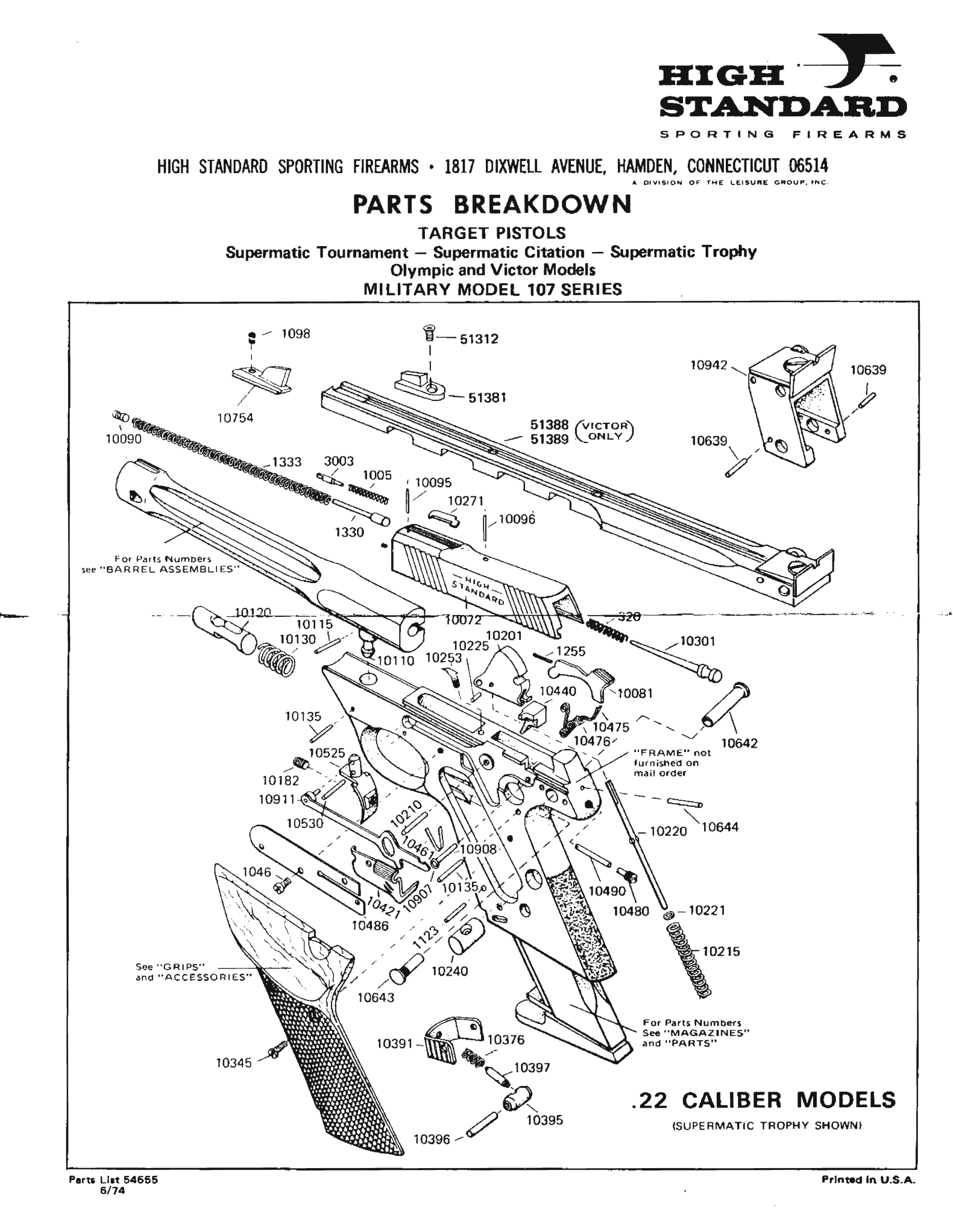 High Standard’s original factory was in Hamden, Connecticut but this factory burned to the ground in the mid seventies forcing the move to Hartford, Connecticut. Amongst collectors and enthusiasts the Hamden made pistols are more highly prized and have a reputation for excellence in manufacture. That being said the High Standard pistols generally have a good reputation for build quality and as pistols that are superbly accurate. The target pistols usually have the rear sight mounted on an extension piece mounted directly onto the frame and not on the slide. This can be seen in the diagram above as part #10942. The reason for this was to ensure that the rear sight would not move at all during firing and would remain fixed in its relationship with the front sight. Models that have the rear sight mounted directly on the slide are subject to some lateral movement to the detriment of accuracy. The downside of this is that the slide is slightly more awkward to cycle, but on a target pistol this is not the most important issue; accuracy is. 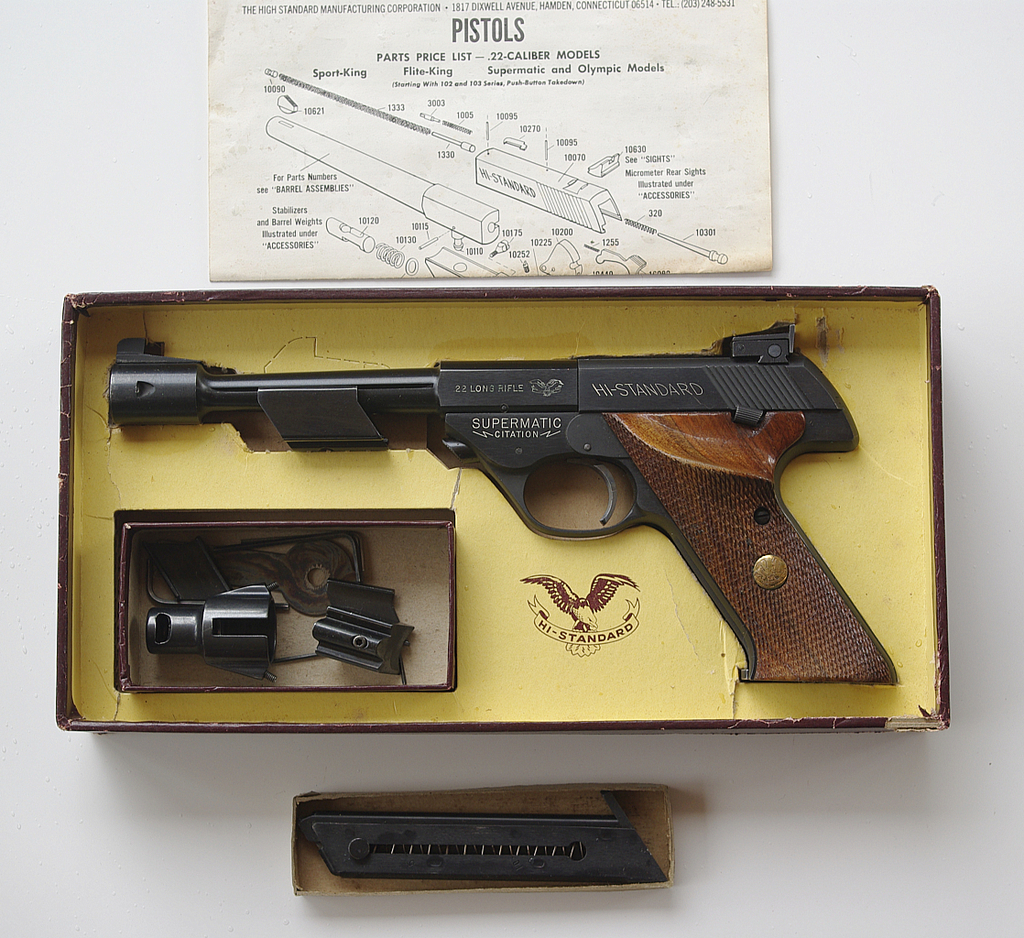 One interesting feature of these High Standard pistols is that the barrel is made to be easily removable and these pistols were sometimes sold with interchangeable barrels so they could be used for different pistol matches or for small game hunting or casual plinking. Barrel removal is as simple as depressing the button at the front of the frame just below the barrel. Commonly this button was fairly stubborn to depress so the best method was to pad the edge of a bench or table with a piece of leather and then press the pistol down on the button to apply the necessary pressure to make it release.

There are three High Standard Supermatic pistols coming up for sale in August by Rock Island Auction and two of those are the more sought after Hamden, Connecticut made models. 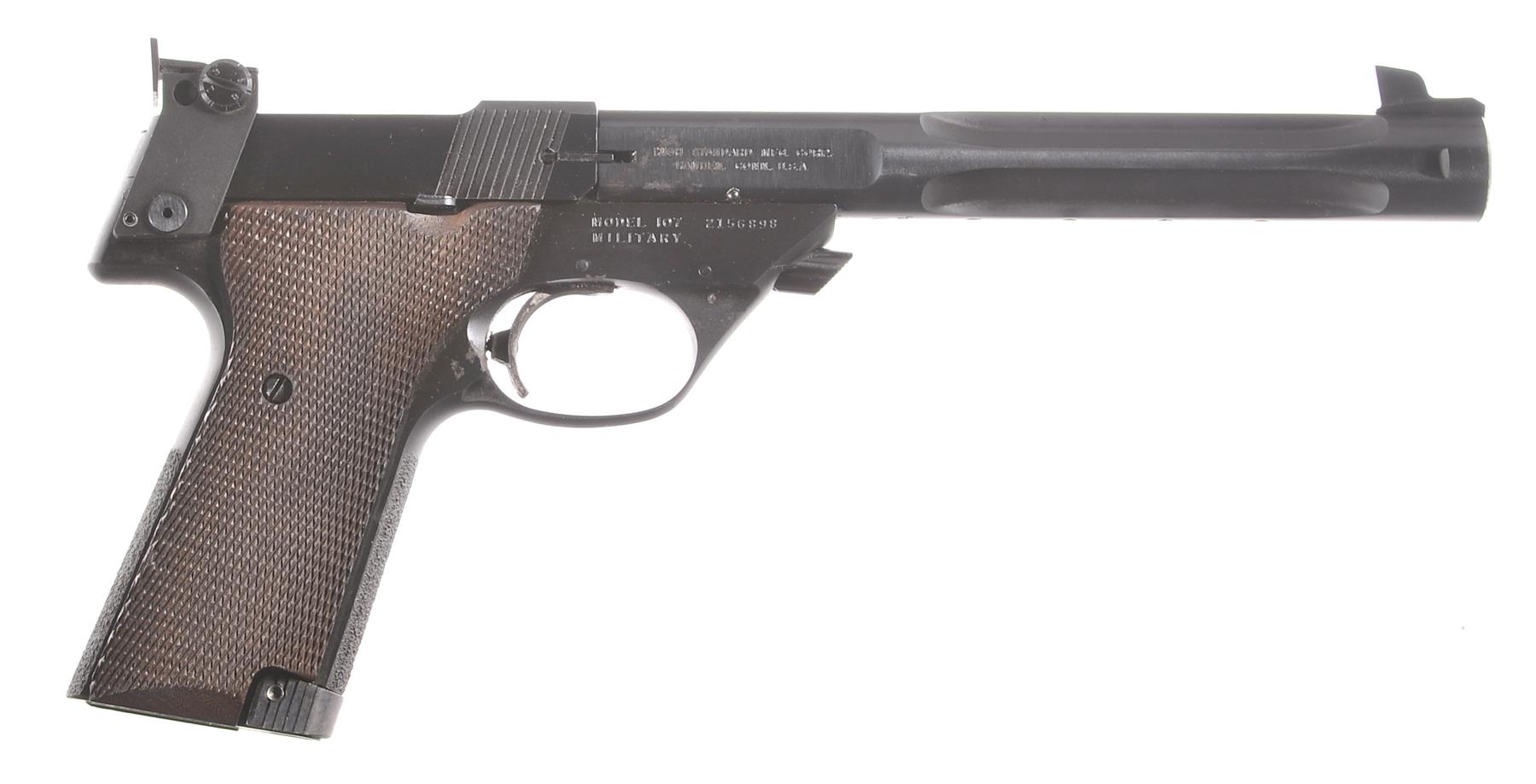 Condition of this pistol is described by Rock Island Auction as follows: “NE – GOOD: in working condition, finish 40% – 79%.” 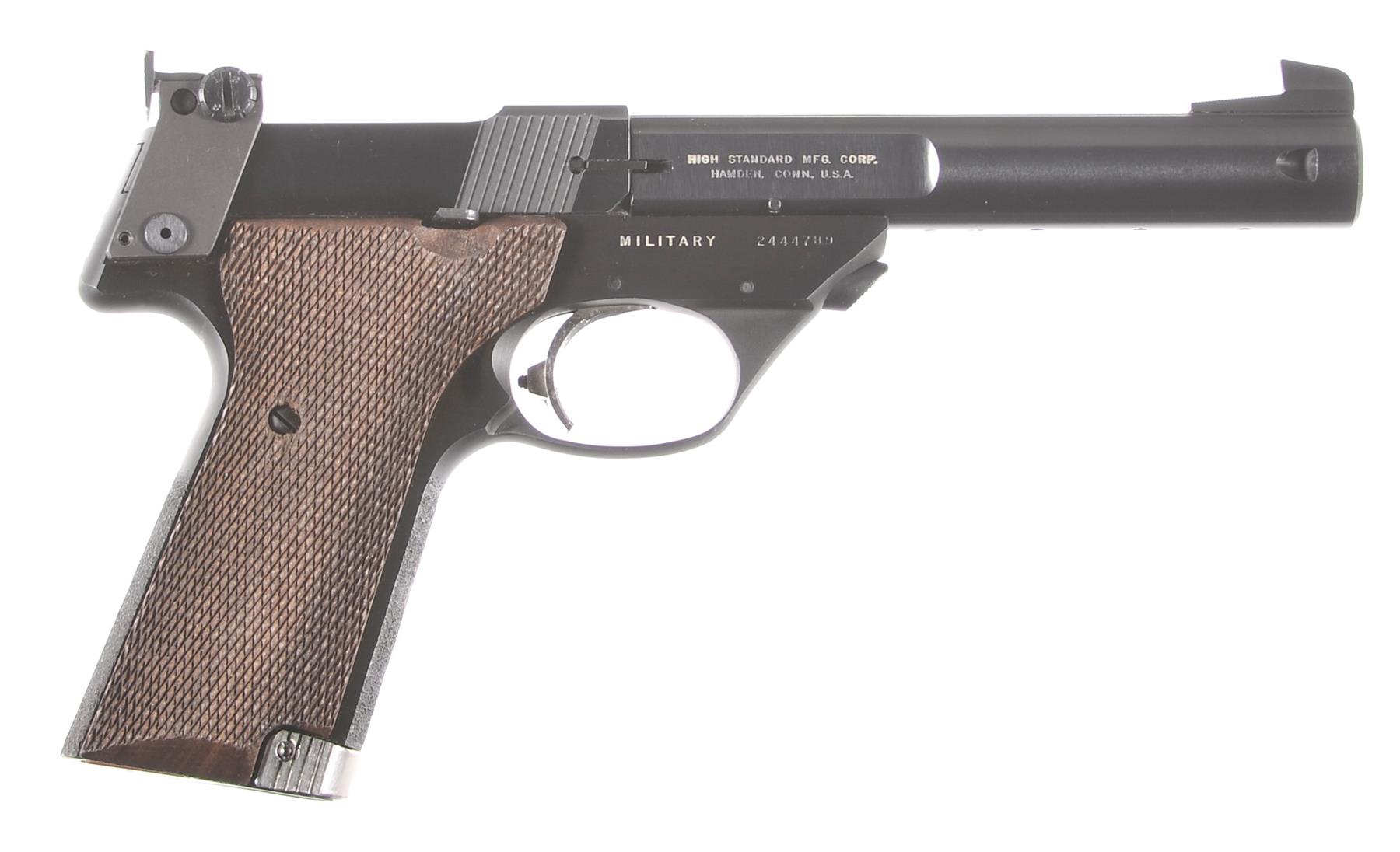 Condition of this pistol is described by Rock Island Auction as follows: “ND – VERY GOOD: in working condition, 80% finish or better.” 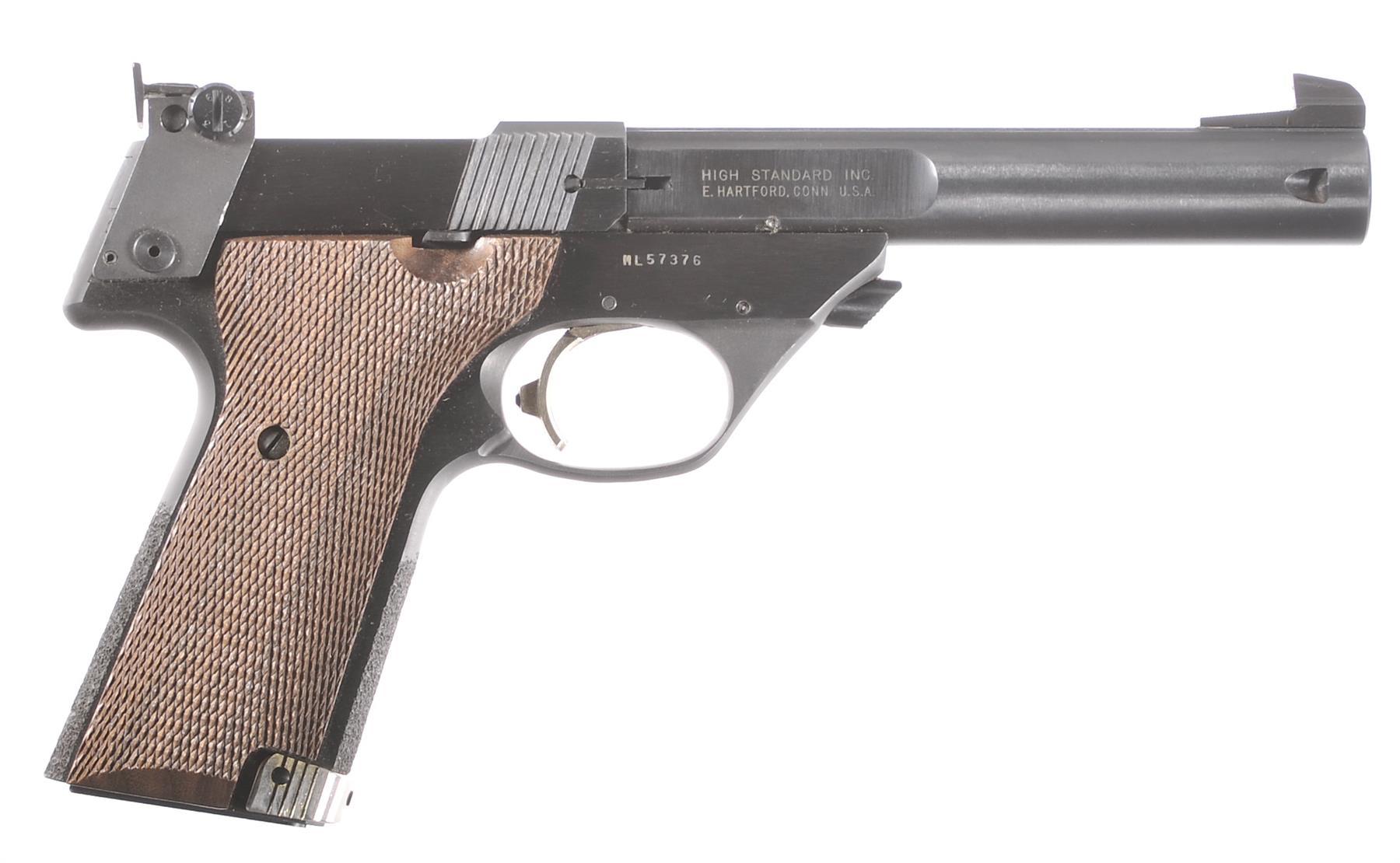 Condition of this pistol is described by Rock Island Auction as follows: “NC – FINE: All original finish 90% – 94% or better, some dings in wood wear commensurable with percent of finish” This pistol also comes with a custom holster.

Expected sale price for this pistol is in the range USD$400-700. 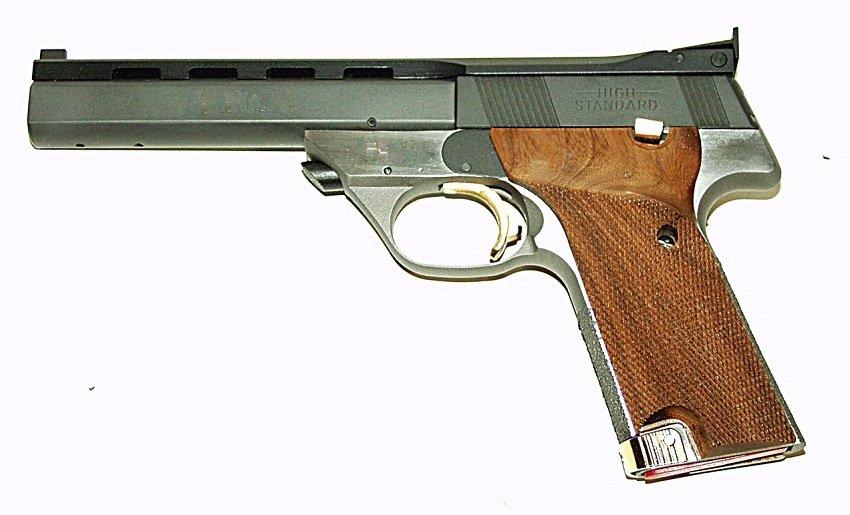 High Standard are still in business making pistols and other types of firearms.

You will find the current production High Standard HS-22 pistol if you click here.

If you have a High Standard Supermatic pistol and need instructions to strip and maintain it you will find the owner’s manual at stevespages if you click here. 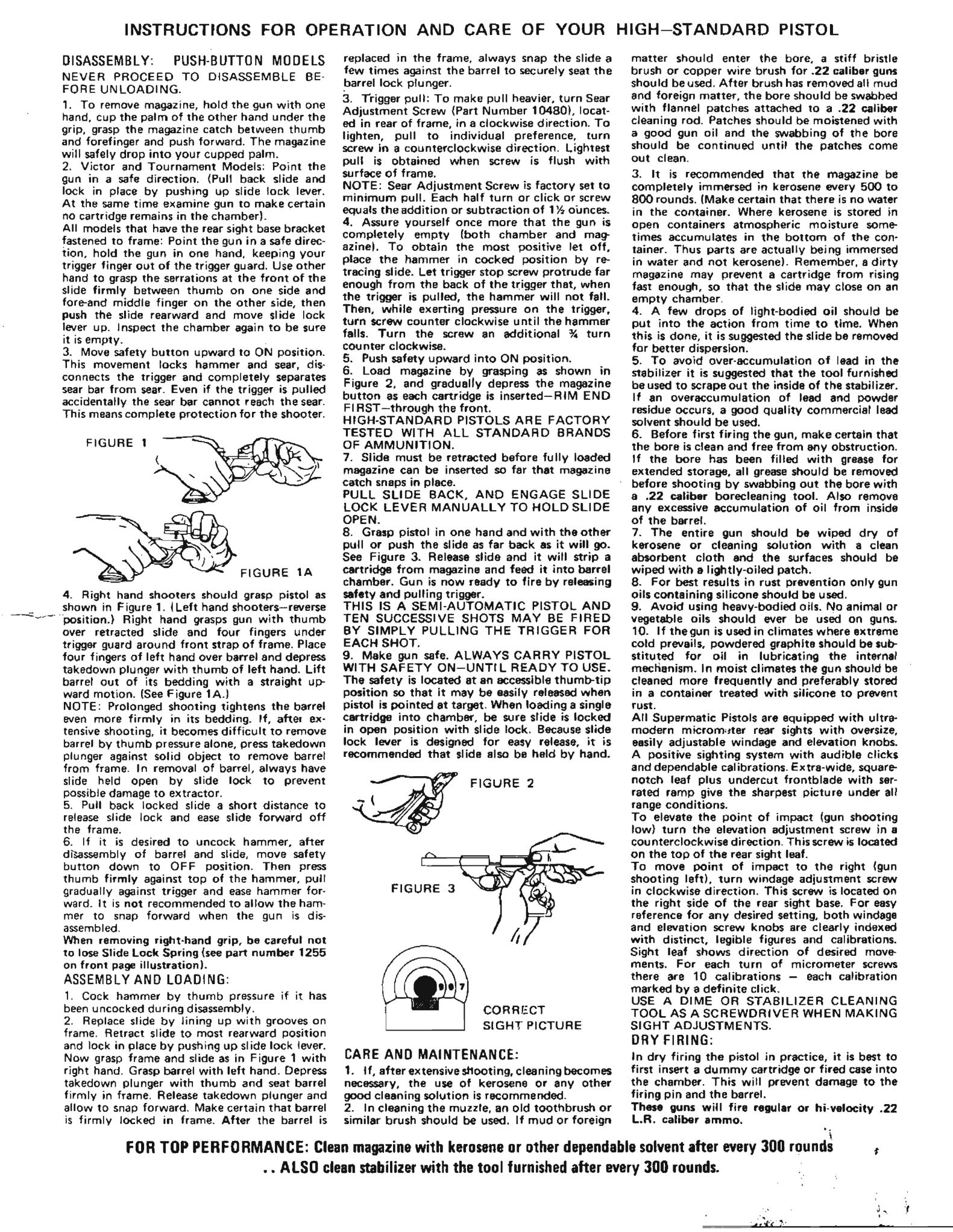 The High Standard Supermatic pistols have excellent and adjustable triggers on many models and have acquired a reputation as accurate and dependable pistols. If you have one at home you might just want to dust it off and spend some time re-discovering it. 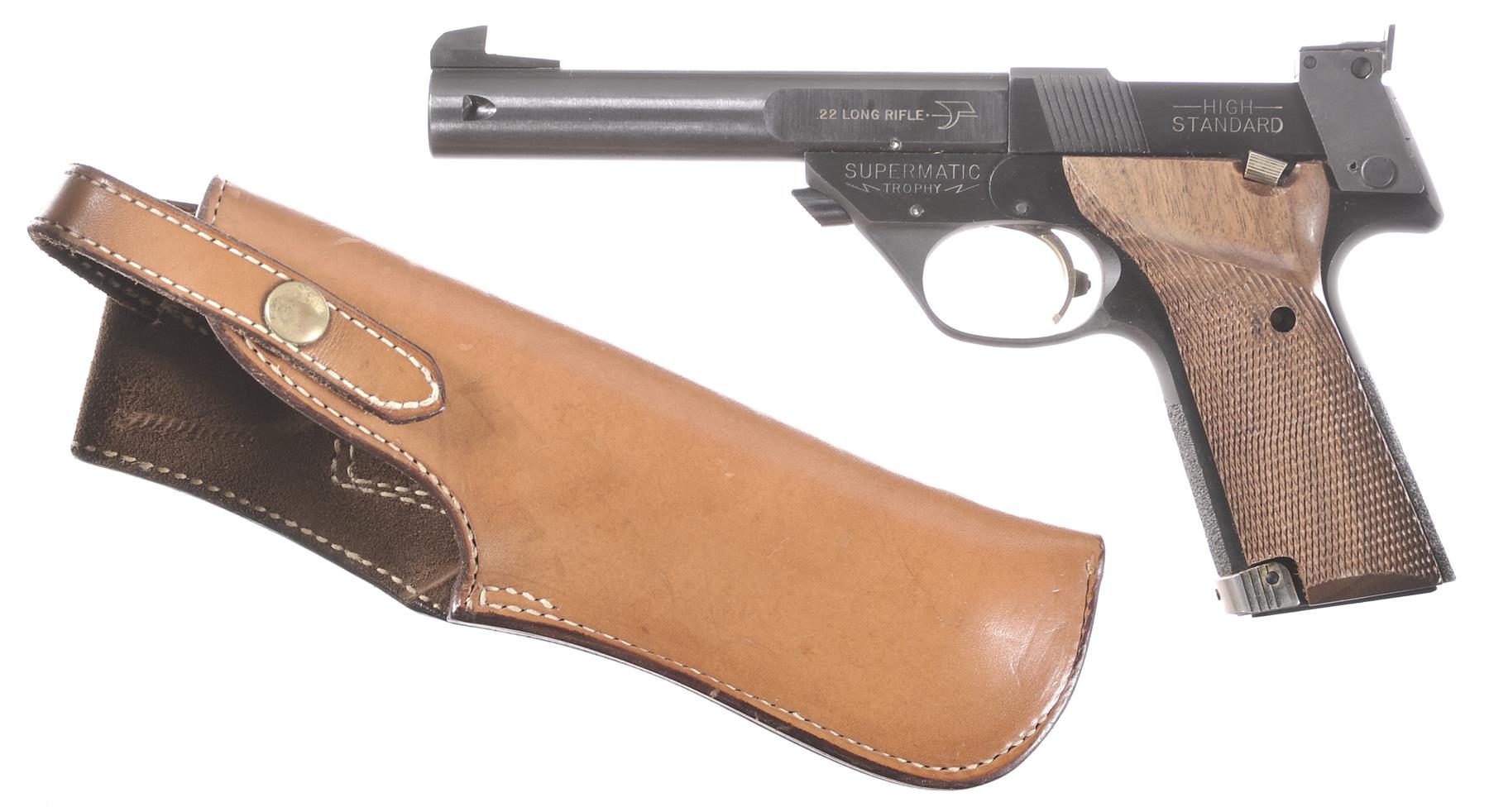