Recently we featured a Second World War Harley Davidson WLA for sale on eBay and this week we’ve stumbled across an Indian Motocycle 741 Military motorcycle (the spelling “Indian Motocycle” is coincidentally correct as you will see in the last picture in this post).

The Indian Motocycle 741 was one of three types of motorcycles that Indian produced for the US Military during the Second World War although these bikes are by no means as common as the Harley Davidson WLA. Through a series of bad management decisions Indian Motocycle had lost the men who were the original visionaries who started the company, and had lost their dealer network at the outset of the First World War when they essentially strangled supply of motorcycles to their dealer network in order to pursue supplying the US Government. It was a fatal error of judgment that Indian Motocycle never recovered from. 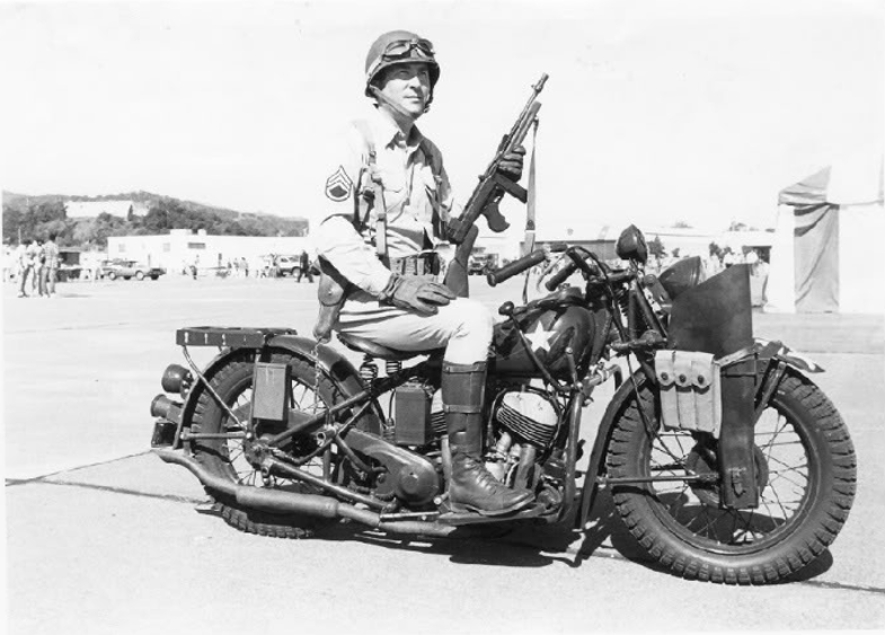 Indian’s first effort at producing a motorcycle for the US Military was the 640. (Picture courtesy g503.com).

The first motorcycle Indian produced for the war effort was the 640 which was based on their civilian Scout 640 and had a 750 cc (46 cu in) V twin engine. This bike was set up very similarly to the Harley Davidson WLA. Visible features on this bike are the gear lever for the three speed gearbox at the side of the gas tank and the luggage rack mounted to the rear of the center of the rear wheel. This model also does not have the tool box on the left front fork.

Other than the 640 pictured above and the 741 (such as the eBay sale bike) the third Indian model that was made for the military was the 841. This is a very different bike and examples are hard to find as only 1,056 were made.

The third and last Indian made for the US military was the 841. (Picture courtesy curbsideclassic.com).

The Indian Motocycle 841 was a copy of the German BMW R71 and was built at the request of the US Army with a horizontally opposed engine and shaft drive to make it suitable for desert warfare. By the time the 841 was produced the US Army had already decided that the Jeep was a better choice than a motorcycle and they canceled the order and bought Jeeps. An Indian 841 is a very desirable motorcycle to find because of their rarity and if you have one sitting in your barn just waiting to be found you might want to get it valued and get it on eBay yourself. Then again it has a convenient scabbard for a carbine on the front forks and your lever action deer rifle might just fit that so nicely you’ll want to use the bike for deer hunting. The money or the enjoyment? Life is full of tough choices. These bikes were sold off by the factory at around US$500.00 each so there are near certain to be a few sitting in barns, garages and sheds across the USA. The ones that have been left out in the weather will be unlikely to be salvageable however. 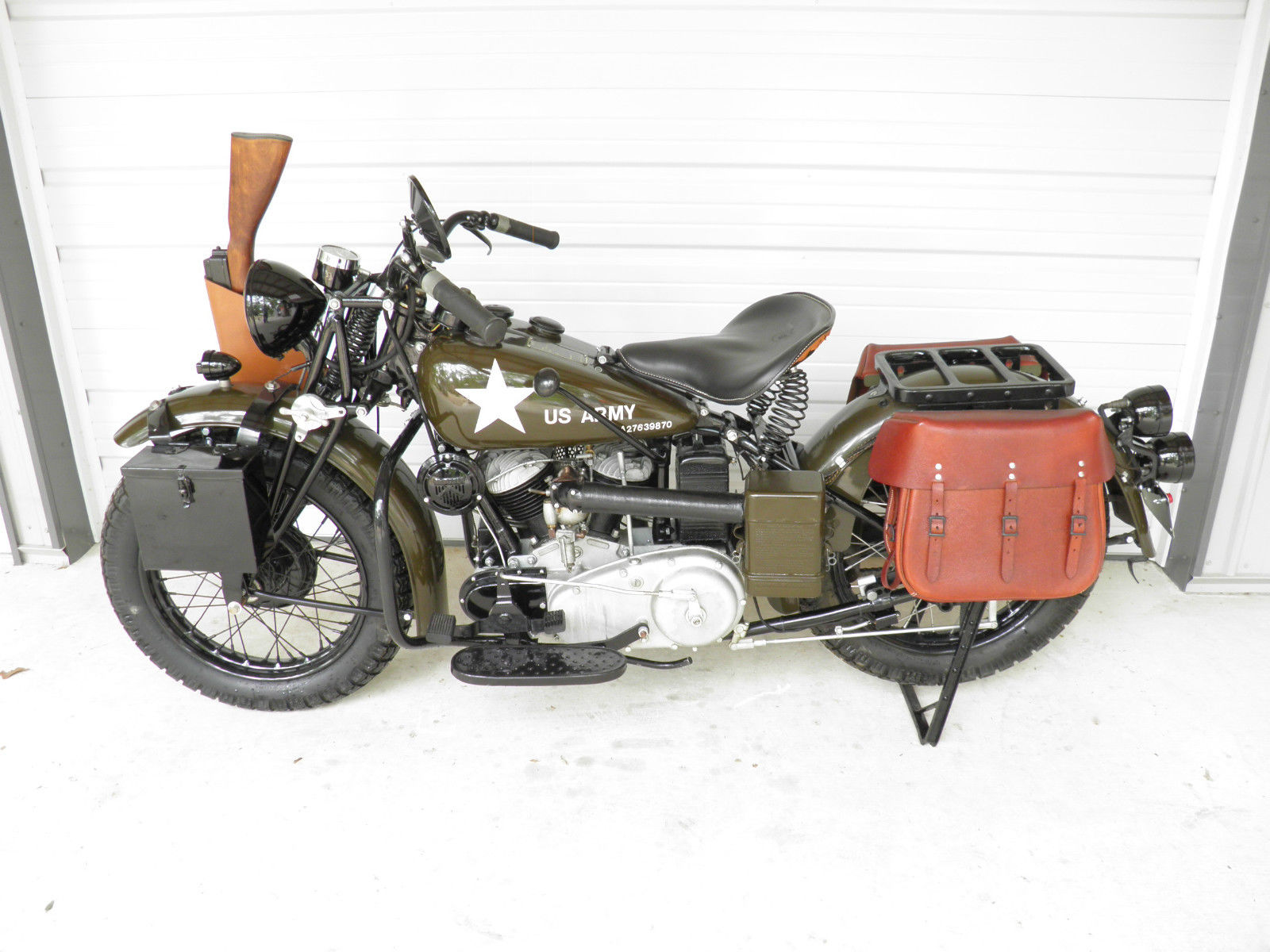 This is the Indian Motocycle 741 for sale on eBay. Note the different placement of the gear lever, the tool box on the left fork, and the carrier located over the center of the rear axle. (Picture courtesy eBay).

The main motorcycle made by Indian for the Second World War was however the 741 of which over forty thousand were made. Many of these bikes were shipped off to America’s allies and finished up in the hands of the British and ANZAC troops. A shipment of 2,200 of these bikes heading for France on a ship named the Hanseatic Star in 1940 was sent to the bottom of the Atlantic by a German U Boat. C’est la vie as the French would say. 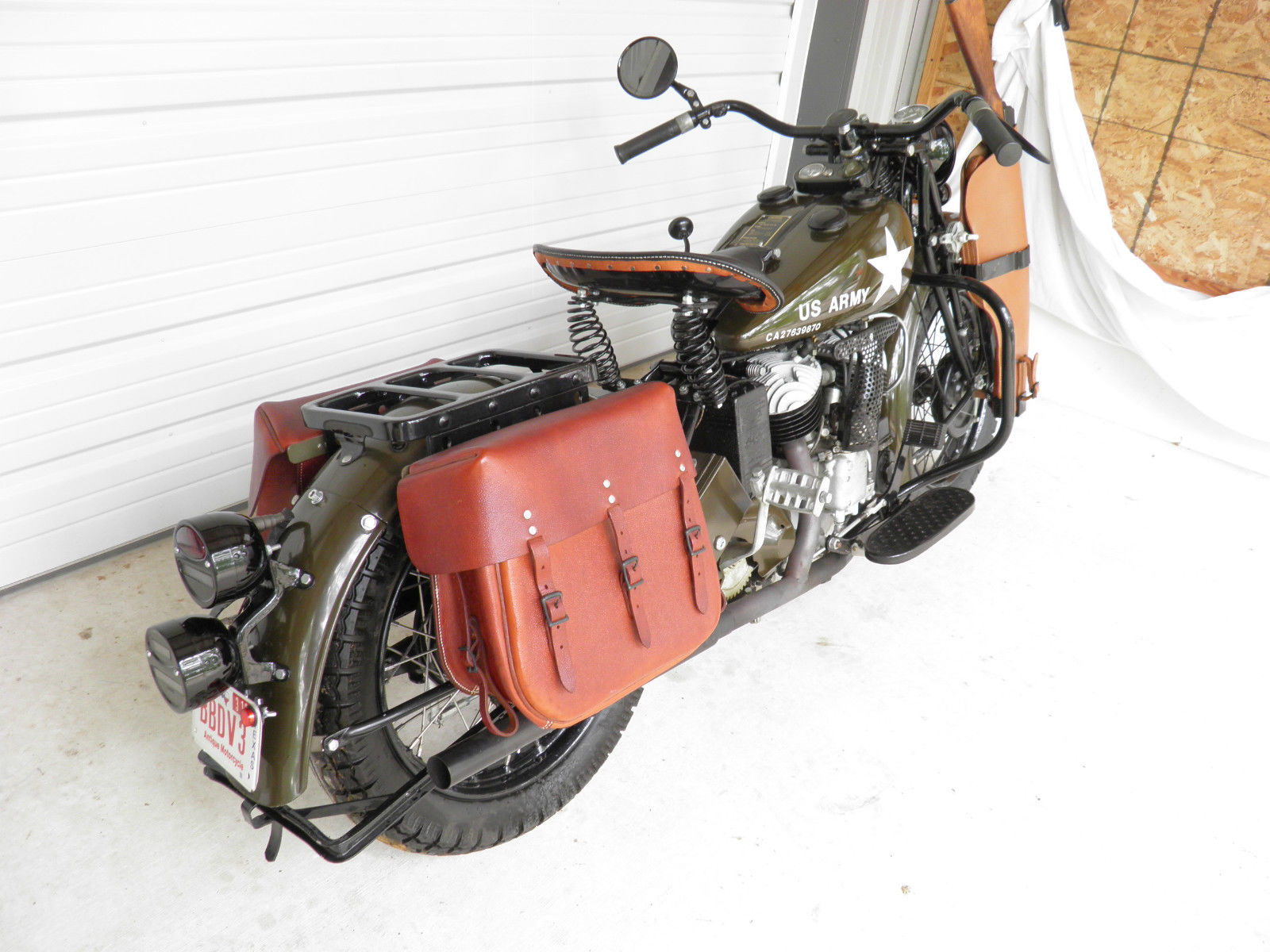 In addition to the forty four thousand Indian 741 bikes made for the US Military Indian shared with Harley Davidson in filling an additional  five thousand bike order from the British War Department. The order was placed when the British bike manufacturer Triumph’s factory in Coventry was bombed halting production. 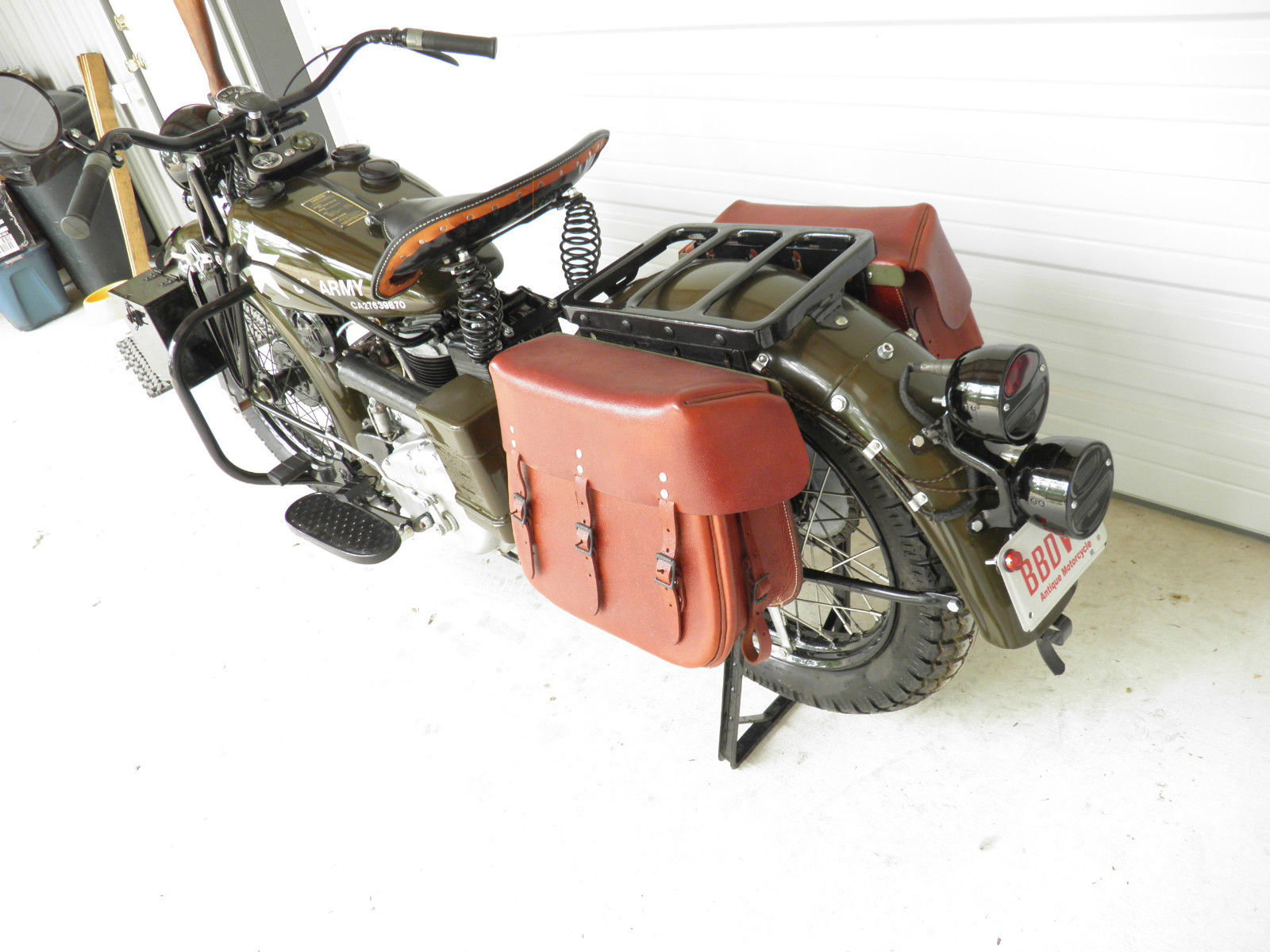 The sale bike appears to have all the original equipment including black out lights. (Picture courtesy eBay).

The eBay seller of this bike describes it as follows:-

“1941 Indian 741
This is the real deal, the engine and frame numbers match. The bike was bought from Bob Stark years ago.
The machine starts easily and runs great. There are no gas or oil leaks. The petcocks and carburetor were just overhauled, oils changed and it has a new battery. The tires are in very good condition. The charging system works.
There is one light scratch on the tank that looks worse in the photo than it is. There is no key to the lock box. Some of the black paint on the speedo is pealing. The civilian lights and horn work, I have not seen the blackout lights work, I do not know how to turn them on. The graphics on the tank are vinyl.
The speedo reads 129 miles. It is hard to believe that is the original mileage, it might be 129 miles since the engine has been rebuilt. The owner has passed and nobody knows how that went.
The Tommy Gun is a replica maid in Italy. The barrel end has an orange plug.”

To verify the bike’s authenticity the serial numbers should be checked. The source I have referred to says that for the 741 bikes ” Serial numbers on engines start with GDA and up to 5 digits after. The rear frame will have a boss with 741 and same # if matching number bike.”

For those living in a state where acquisition of a current production Thompson SBR is legal it will fit the scabbard nicely. For those elsewhere the replica will have to do, although there are some nice all metal BB replicas out there and they can be a lot of fun to shoot.

The Indian Motocycle 741 Military motorcycle is a bike with an interesting history from America’s second most famous motorcycle manufacturer. 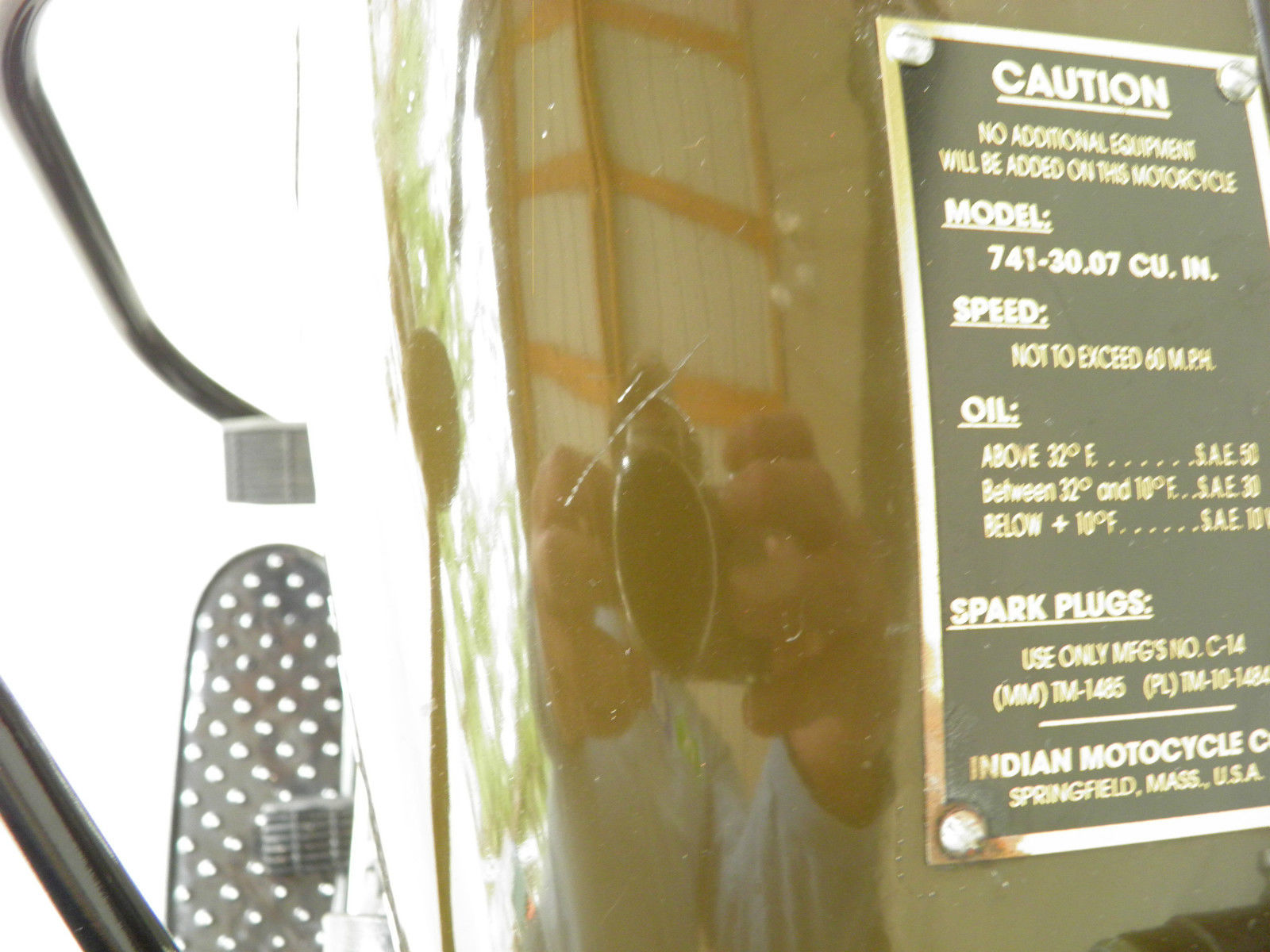 As can be seen on the manufacturer’s plate “Indian Motocycle” is indeed the correct spelling. (Picture courtesy eBay).