(This was an article I wrote for Hagerty which was published on 15th March 2015. You’ll find the original on the Hagerty web-site if you click here.)
I sometimes wonder if all Britons have just a trace of lemming blood coursing through their veins. We are all familiar with Lemmings; cute little animals with whiskers and bright eyes who occasionally decide to go on great adventures and so leap off cliffs and attempt to swim the ocean in search of …? I wonder if the lemmings actually know what it is they’re seeking? Then again I wonder if that actually matters to them. Perhaps, like an old fashioned Brit, they just think “time for an adventure” and off they go.

We see this curious trait in Britons throughout history. Alfred Lord Tennyson celebrates something of it in his “Charge of the Light Brigade” “Half a league, half a league, half a league onwards, into the Valley of Death rode the six hundred…” and Britain’s military history is full of people like Horatio Nelson taking his decision to “Cross the T” at Trafalgar. We can imagine Lieutenant Chad at Rorke’s Drift addressing the soldiers before the Zulus arrived; “Well chaps, I’m afraid we won’t be handing out port and cigars this evening. We have a few thousand not so friendly guests coming to pay us a visit so we’ll be handing out cartridges instead”.

One of my old school friends had a dose of this lemming like passion for adventure. Thus it was in what may have been some sort of vision of the future of motor racing his first car, which he bought in 1968, was an Austin A35. Let’s call him “Joe” (not his real name). Joe liked to drive adventurously. Thus it was that the Austin A35 didn’t last long before it was retired in a plume of blue smoke and he moved on to something more sophisticated that he thought girls might like, a Morris Minor Convertible. It was whilst riding with Joe in the Morris Minor Convertible that I experienced my first car crash; it was raining, he hadn’t seen the pole, and thankfully we were only doing twenty miles per hour at the time of impact so the injuries to people were minimal, the pole was not injured at all, but the Morris Minor Convertible was not so much “face lifted” as “face drooped” by its little altercation. Joe reckoned we could just keep driving and we did for another few hundred yards until we realized that the radiator had been broken amidst the steam and blue smoke that brought us to the involuntary halt of a seized engine. Joe’s next car was a nice Triumph Herald. One day he tried to pass a semi-trailer on the left hand side in a quick nippy maneuver except he realized too late that the semi was turning left at the time. The result was the dual wheels of the semi’s trailer crunching their way over the bonnet of the previously quite pretty little Triumph Herald. Happily Joe did not lose his legs but was on crutches for a while and perhaps he lost his penchant for lemming like behaviour in that incident because he seemed to settle down and went on to become a school master.

When I went to see the movie “Rush” a little while ago the character of James Hunt reminded me a bit of Joe; and as it turns out they do share something in common, both really enjoyed driving an Austin A35 adventurously. 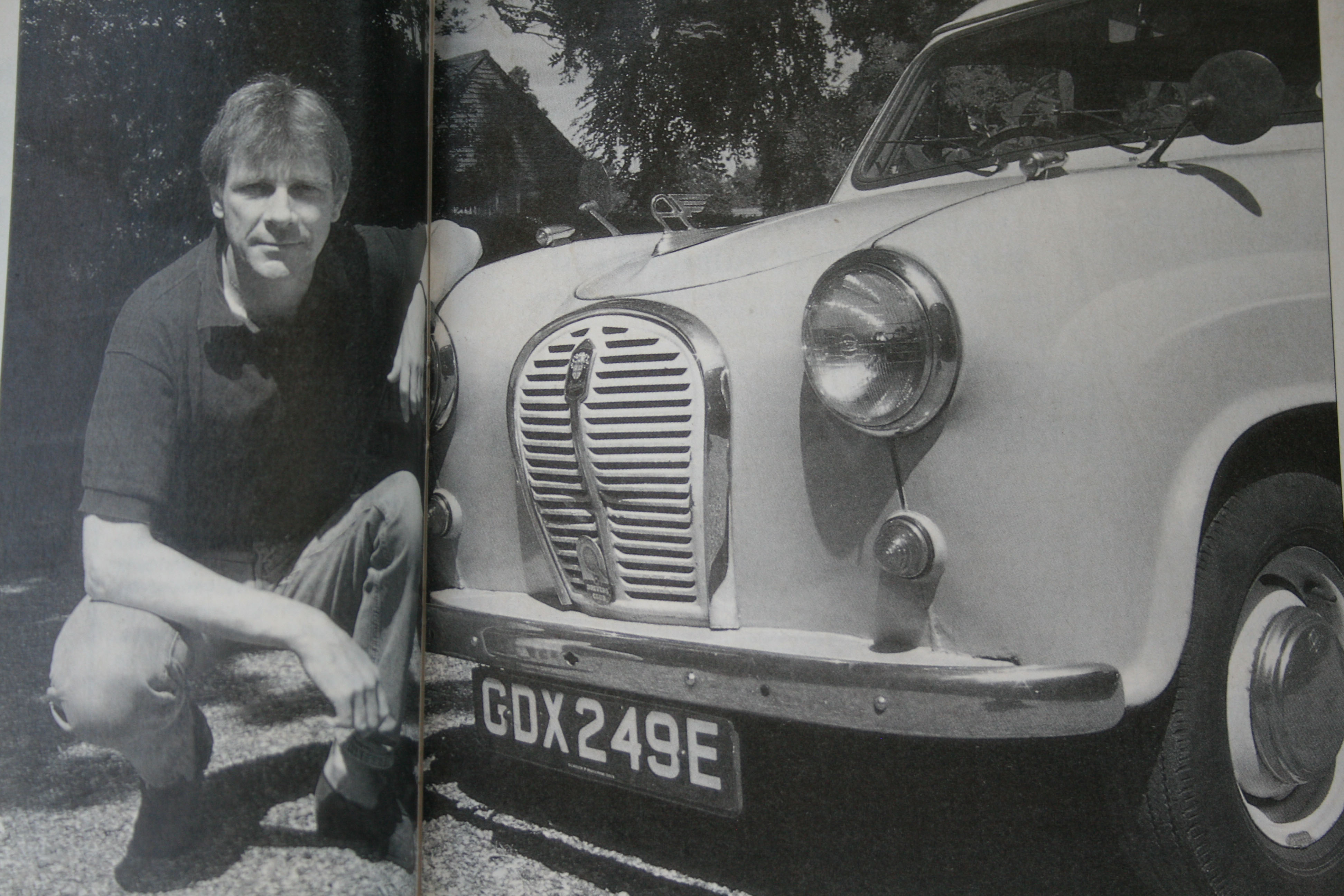 James Hunt with his Austin A35 van.

I must have been a very unimaginative teenager. I drove Joe’s Austin A35; it didn’t so much accelerate as “gain momentum”. When you put it into a corner fast the body roll made you wonder if putting wheels on the roof might be a good idea. As a teenager I just couldn’t see an Austin A35 as a sports car much less as a racing car. I saw the Austin A35 as being the sort of car “little old ladies drive to church on Sundays”. Although I had seen the Abarth tweaked up Fiat Bambina at the Earl’s Court Motor Show my teenage mind just wasn’t developed enough to join up the dots and think “if you can make a Fiat Bambina do 120mph and make it corner then we could do that to an Austin A35”. I guess that’s one of the reasons James Hunt became a Formula 1 champion and I didn’t.

Though I may be lacking the imagination the people over at the Historic Racing Drivers Club do have the imagination to see the potential in the Austin A35 and to develop budget racing based on those cars, and my goodness what cars they become. If you head over to http://www.hrdc.eu/academy.html you will find some information on getting started in affordable and fun historic motor racing. 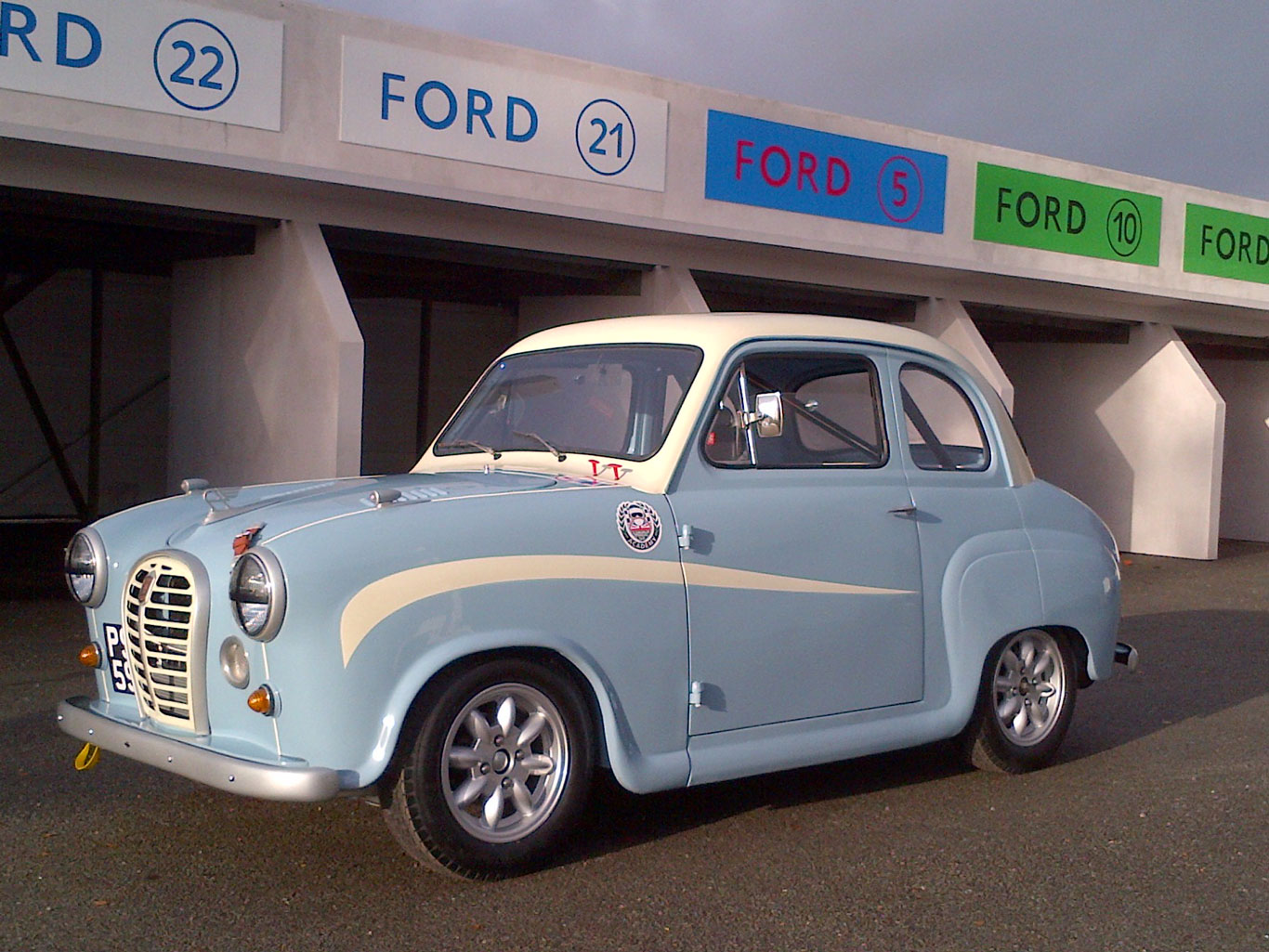 An Austin A35 prepared for HRDC Academy racing. It might not be a Ferrari, but it is a recipe for fun on for wheels.

What do you need to get started? First you need an Austin A35 saloon, either two or four door but not a van, “Countryman” or pickup. Then you’ll need the authorized race kit which is available from HRDC nominated suppliers. The idea of the “Academy” A35 cars is that they are all kept to a close standard so the car itself doesn’t give a driver a significant advantage over other drivers. That way the racing comes down to driver skill and strategy. To this end all cars have to run sealed engines supplied by Classic and Modern Engine Services in Bracknell. Cars have to be MOT inspected and  run on Dunlop CR65 L section tyres.

This is probably the sort of thing my friend “Joe” and I needed when we were wanting to get into motor racing. HRDC Academy is aimed a being affordable and enormous fun spelled FUN in big friendly letters. In my young days I was fortunate enough to have a taste of motor racing by doing a competition drivers course over three months on a local racing circuit. I still remember the thrill the first time I cornered with an inside wheel off the ground. I wasn’t in a high performance car but when when that car was pushed to its limits on a race track it was the most fantastic adrenalin rush I think one could get – well, the best adrenalin rush short of buying a Spitfire anyway.

So, do you have a yen to try your hand on the race track? James Hunt used to love racing his A35 against all and sundry so it can’t be a silly idea if a veteran Formula 1 champion loved it. If you’ve longed to get into motor sport but always thought it to be out of reach then HRDC Academy A35 racing might just put that dream in reach for you. Go for it. 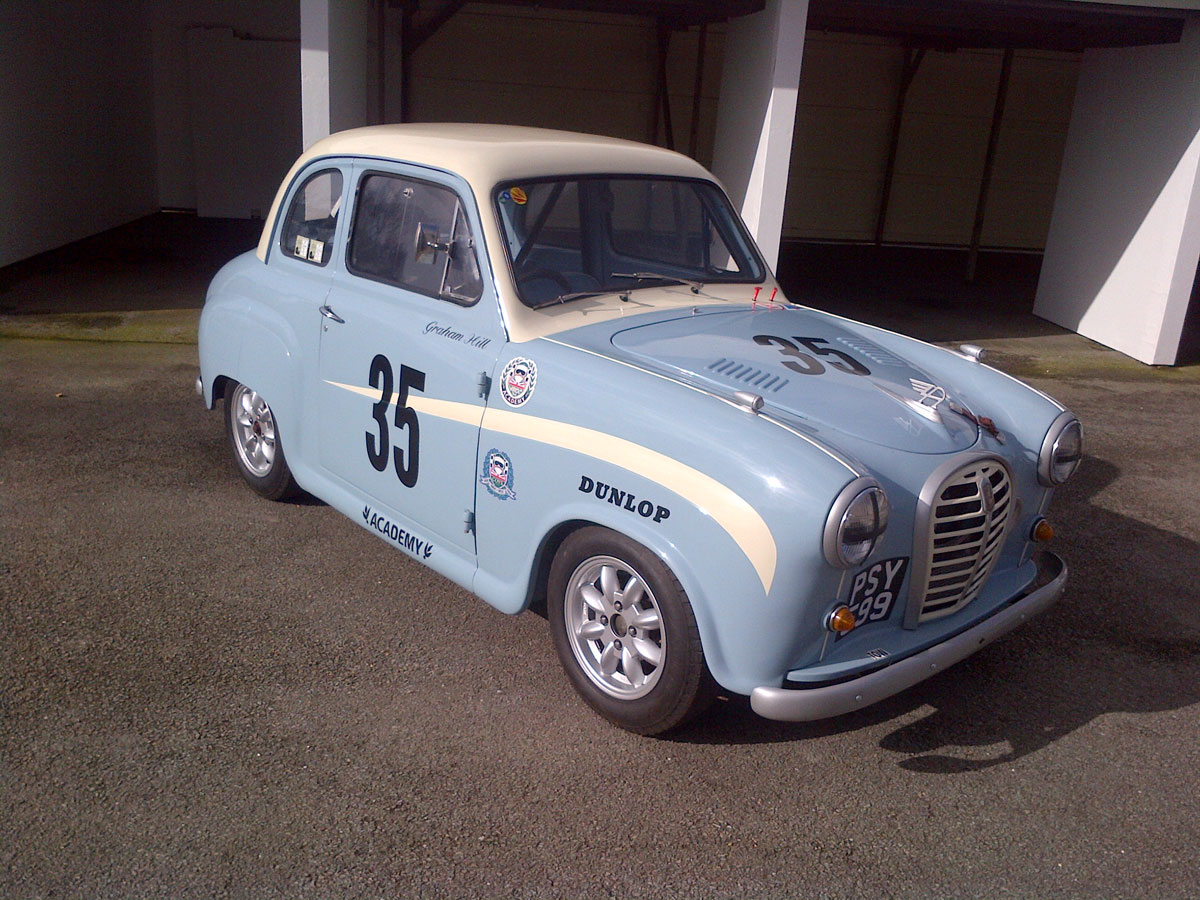