The Mauser 66 is one of the most interesting rifles ever designed and manufactured. They were a product of intelligent design and top quality German engineering melded together in a rifle that, arguably, should have been rather more popular than it was. The first thing that struck me when I was first privileged to handle one was the solid feel, the “closing of a bank vault door” quality as one worked and closed the bolt, and the fabulous single set trigger on the first example I examined. Combined with this impression was the unusualness of the design with its telescoping bolt action, and the fact that it had a brilliantly designed take-down system. 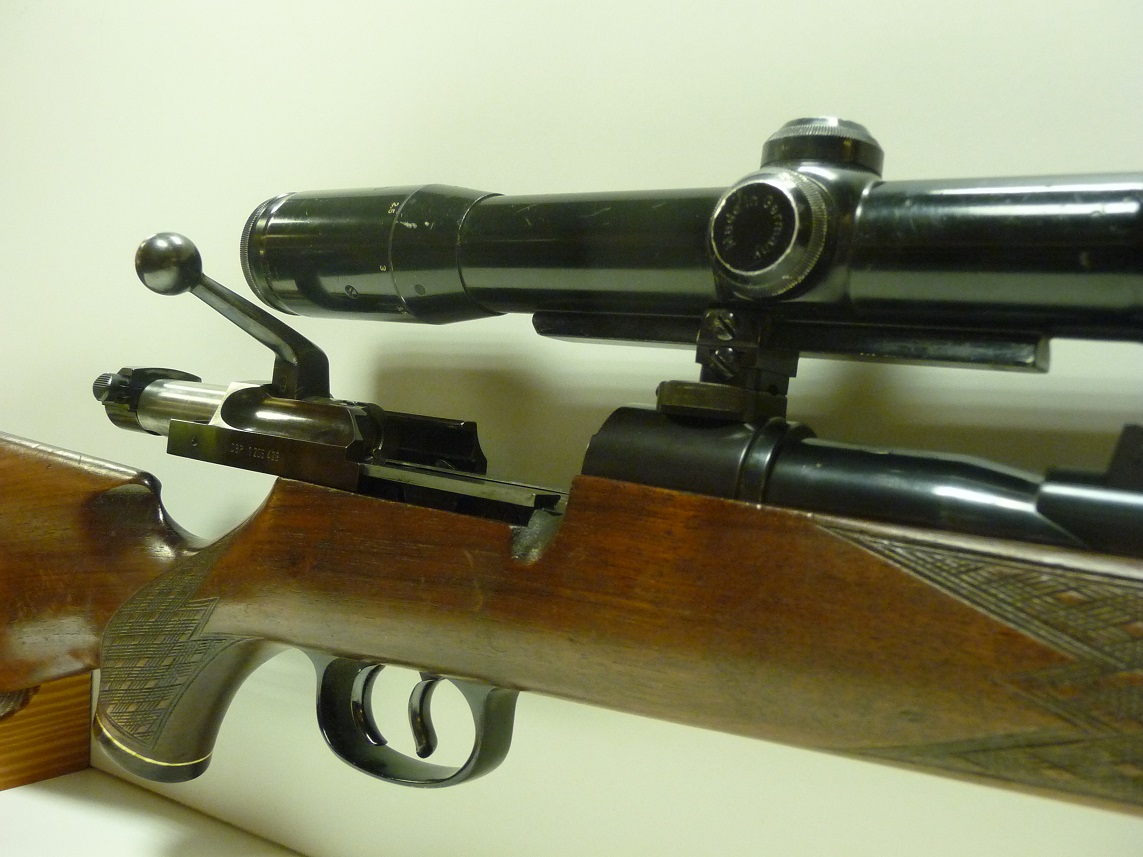 The telescoping bolt action of the Mauser 66. The action is smooth and permits the action length to be much shorter than on a conventional bolt action rifle. (Picture courtesy of dorhoutmeeswinkel.nl). 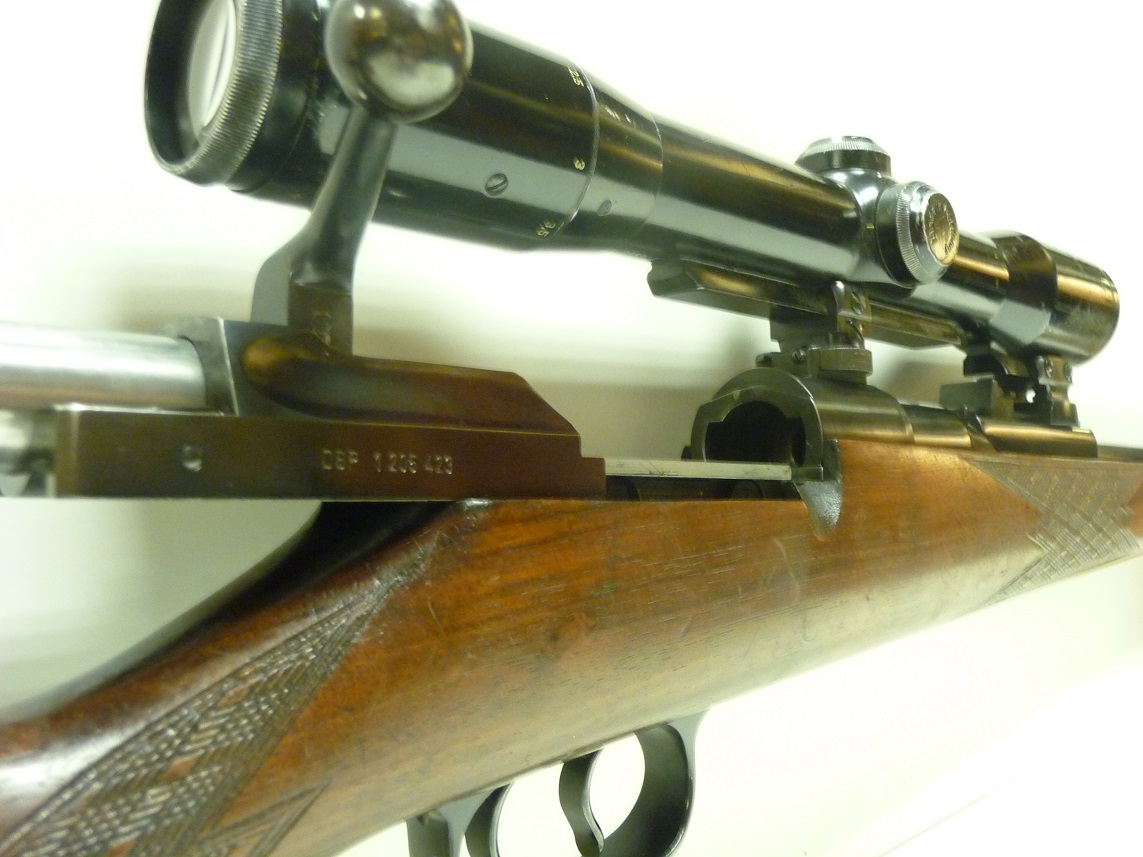 The smoothness of the action and the quality of manufacture pretty much guarantee that owners will tend to be satisfied and content to keep their Mauser 66. A comment from an owner listed as “atkinsonhunting” on the 24hourcampfire.com forum is typical of what owners tend to report. He says:-

“I have had two of them, one a high dollar custom rifle by a top of the line Custom gun guild gunmaker, and the other was a std. grade, both in .375 H&H… I view them as butt ugly in appearance, but that is where it stops, they are smooth as silk, they feed like a poop through a goose, I doubt that you could make one jam, triggers are good, and they are bench rest accurate, It just can’t get any better than that, not to mention they are shorter by about 6 inches than a std. bolt action…they in fact are a short as a double rifle.”

A writer named Rod Cockerill from an African web forum (africahunting.com) suggests that the rifles are beautifully made but that they “can fail horribly when exposed to the dusty conditions of the African bush”. It would be interesting to find out what kind of failure is being described, though, for a dangerous game rifle, I would probably baulk at taking a Mauser 66 along on a hunt purely because of the age of the rifle and the difficulty of getting parts. For a Mauser for dangerous game I would almost certainly choose one of their new M98 Magnum rifles. You’ll find them on Mauser’s web site if you click here.

A Mauser 66 taken down with two barrels showing the components of the system. (Picture courtesy of waffenboerse.ch)

The interchangeable barrel system of the Mauser 66 enables the owner to have two or more calibers available in one rifle. The caveat is that calibers to be interchanged have to match the bolt face dimensions of the action. For the Mauser 66 there are four caliber groups within which it is possible to interchange barrels.

Calibers: 7mm Remington Magnum, 300 Winchester Magnum, 375 Holland and Holland Magnum, 458 Winchester Magnum. (Note: In the factory manual for the Mauser 66 the 300 Weatherby Magnum is not included in the list of available calibers but is listed in the available interchangeable barrels.)

So, it would be possible to have a Mauser 66 which would accommodate 7x64mm and 30/06, and also 9.3x62mm as they all have identical rim sizes. Or you could have one with barrels for 6.5x68mm and 8x68mm. Or you could have one with a bolt face for the belted magnums and use such things as the 7mm Remington Magnum and any of the other belted magnums. All that being said I don’t know that many purchasers of Mauser 66 rifles purchased multiple barrels with their rifle. I certainly don’t see too many appearing on the second hand market so equipped. It would be possible to have a Mauser 66 set up with two or three different caliber barrels and either have a different telescopic sight fitted to each barrel or even use just the one telescopic sight and, back in the sixties and seventies when rifle-scopes did not have some of the features we find nowadays, re-zero each time you changed over. But would it be worth it? My thought is that interchangeable barrel systems are a nice idea, but I would rather shell out the shekels on two or three rifles rather than go through the hassle of trying to change barrels and scopes over. 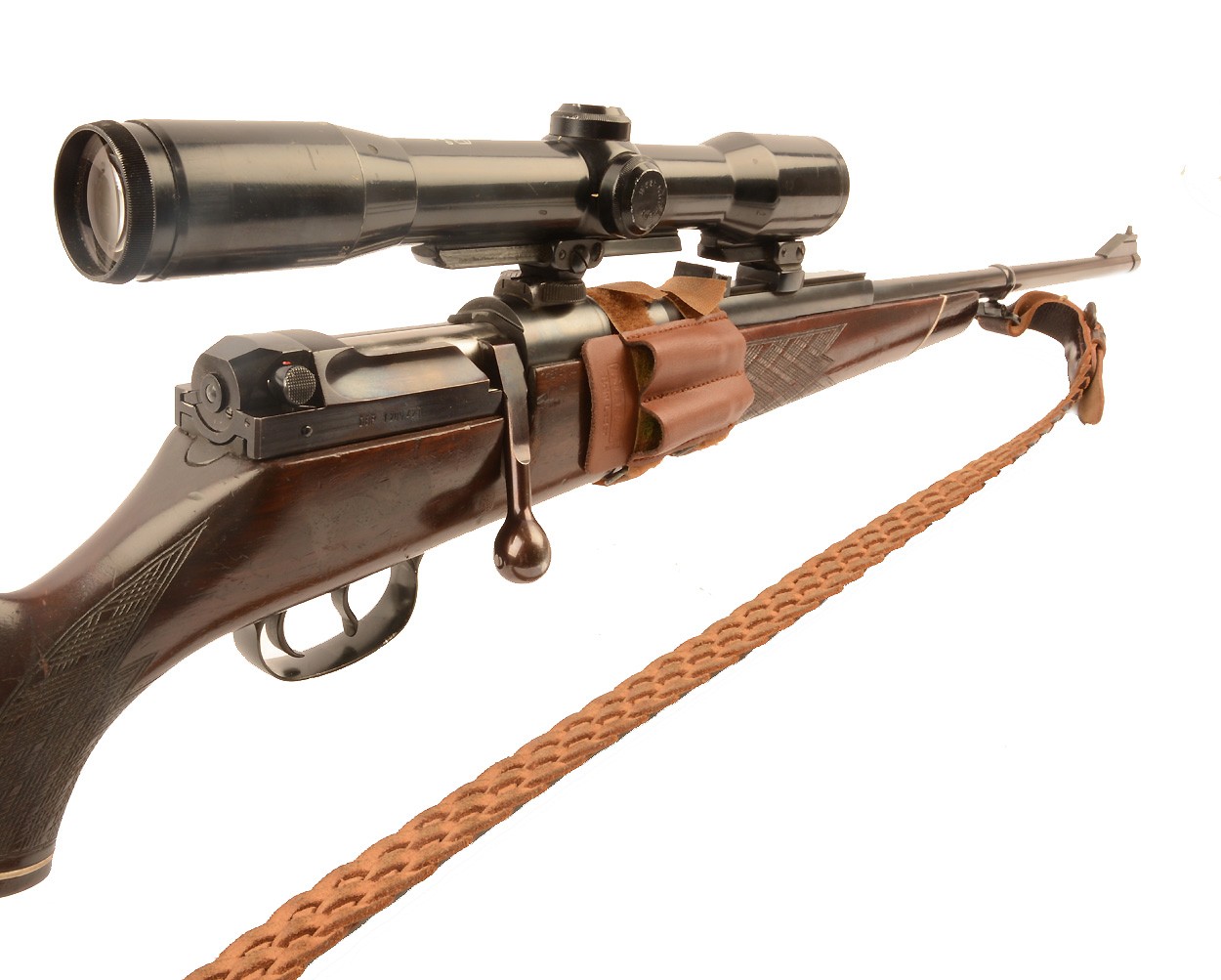 A Mauser 66 in 5.6x57mm with an unusual two cartridge leather pouch. (Picture courtesy of waffenboerse.ch)

The Mauser 66 came with three optional choices of trigger. A conventional European double set trigger, a single set trigger, and a single stage “shotgun” type trigger. For those unfamiliar with the double set trigger, the front trigger is the only one that will discharge the rifle. If it is simply pressed it will provide a heavy but crisp “shotgun” trigger pull. However, if the rear trigger is pressed first it “sets” the front trigger as a light “hair trigger”. To unset the hair trigger one can either apply the safety catch and trip it, or, apply the safety, then hold the rear trigger back, and then press the front one to unset it.  For the single set trigger there’s a switch that looks like a tang safety at the rear of the action; push it forward and it sets your trigger as a “hair trigger”. If it is not set it is a conventional heavy single stage trigger. To unset it Mauser recommend that one engage the safety catch and then push the tang mounted button forward and hold it whilst pressing the trigger, then release both slowly. 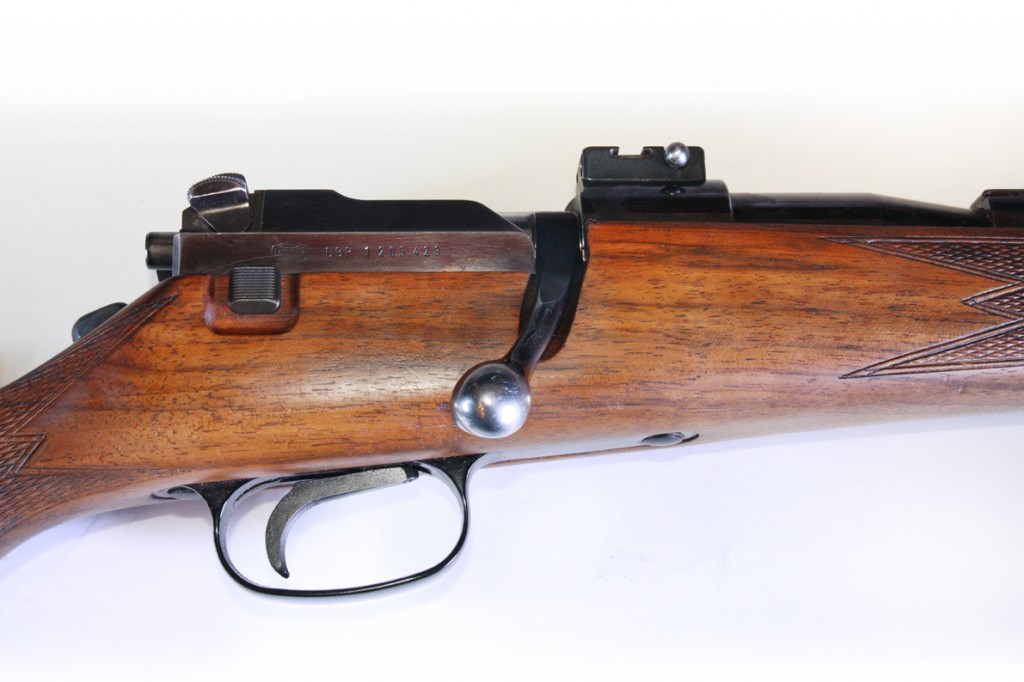 The optional single set trigger on the Mauser 66. The button on the tang that looks like a tang safety is in fact the push button to set the trigger. The button is pushed forwards as one does with a tang safety. The actual safety catch on the Mauser 66 is on the rear of the bolt assembly. The square button visible behind the bolt handle is the bolt release. (Picture courtesy of serbaldeloscazadores.com)

The safety catch on the Mauser 66 is mounted on the rear of the bolt assembly and blocks the firing pin in addition to locking the bolt closed.  The safety is pulled back to engage; once engaged the bolt is locked shut and the rifle cannot fire. To disengage there is a tab button on the top of the safety button. This tab must be pushed down and then the safety pushed forward. The button acts as a safety lock and is easy to operate. The safety catch is silent in operation.

Although the only Mauser 66 rifles I’ve seen have the safety catch described above I note that some of the pictures from European web sites show what appears to be a different push button safety catch. I don’t have specific information I can share on that. 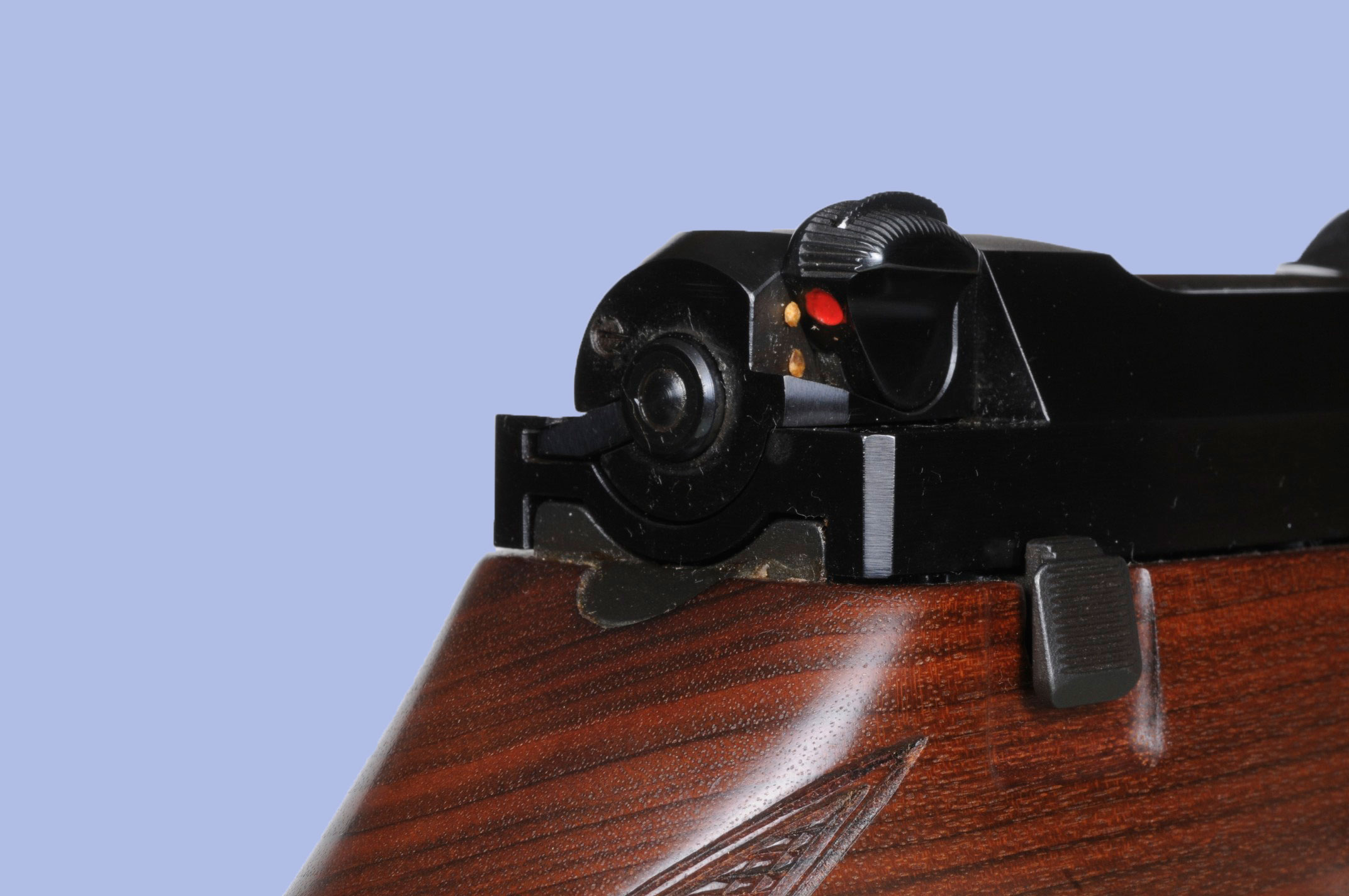 The safety catch of the Mauser 66. The locking button is visible at the top of the safety button. (Picture courtesy of armes.be)

This model was available with the choice of a single stage “shotgun” type trigger, a single “two stage” set trigger or the European standard double set trigger.

This model featured the single set trigger actuated by a push button on the tang.

Barrel length for these standard calibers was 60cm

Barrel length for these magnum calibers was 65cm

Barrel length for these big game calibers was 65cm

There was also a “Sniper” model for military and police use, the Mauser 66 SP, and a model specifically for 300 meter Free Rifle Match. These were both chambered for the 308 Winchester/7.62mm NATO cartridge.

Magazine capacity is listed as 3 rounds.

The telescoping action of the Mauser 66 requires some variations in mounting a telescopic sight. It isn’t difficult but does require specially designed mounts. (Picture courtesy waffen-faude.de)

The Mauser 66 was a product of the sixties and seventies, a post-war era that has given us some of the most creative and desirable motor car designs, and some of the most creative rifle designs, of which the Mauser 66 is undoubtedly one of the best examples. Designed by the visionary Walter Gehmann it endures as a rifle to use and enjoy, or to collect and enjoy, or both.

Above User’s Manual courtesy of Mauser.com. For the original file on Mauser’s web site click here. 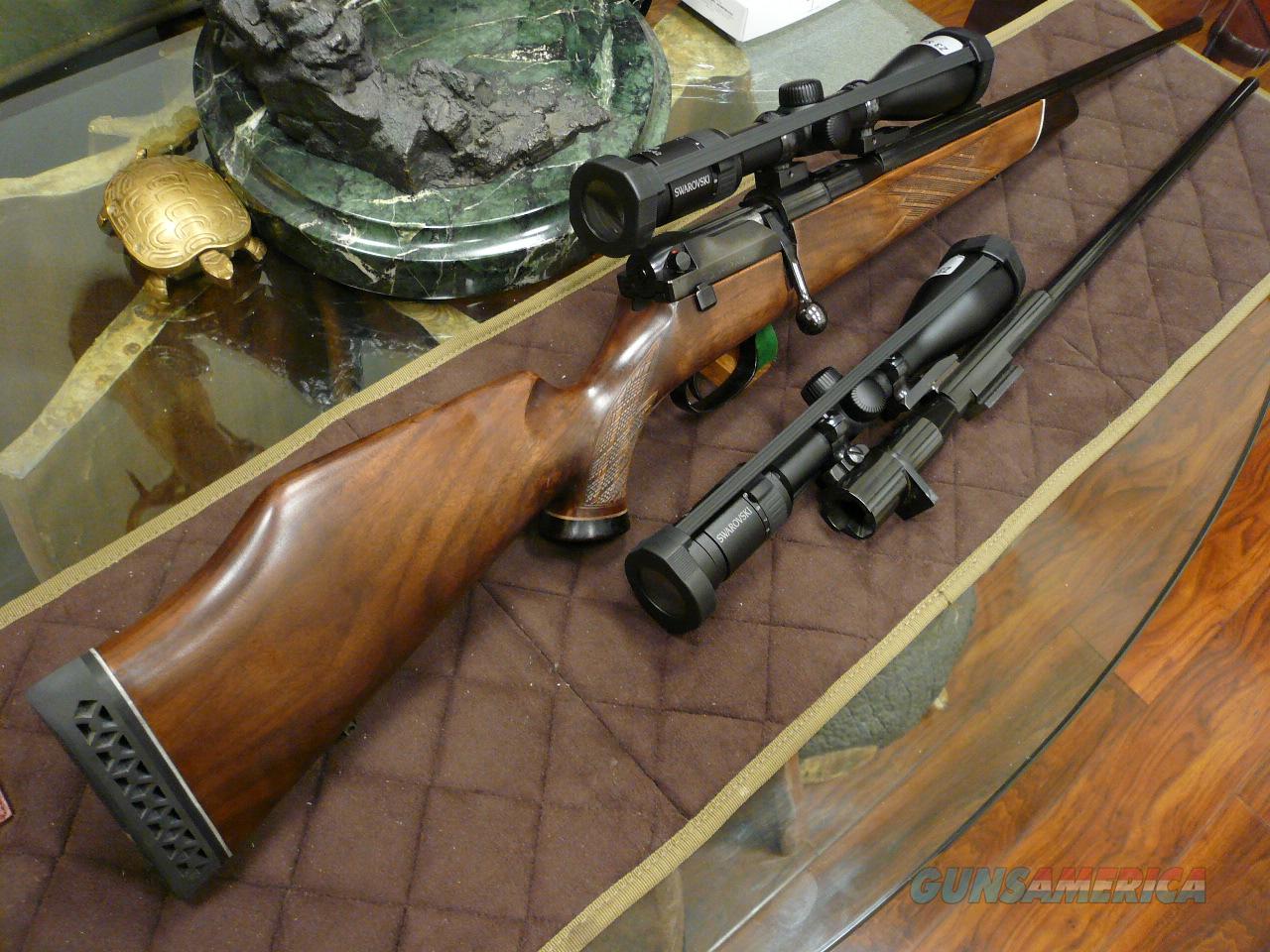 (Picture courtesy gunbase.com) – This is a wallpaper quality image. Just click on the picture to see it full size 1280×960).

There is a comprehensive article on the Mauser 66 in PDF format from Thames Valley Guns available if you click here.

(Our feature image at the head of this post courtesy of waffen-faude.de)