I suspect that it is the secret desire of almost every gun enthusiast to have the opportunity to fire a Thompson sub-machine gun. Winston Churchill was one who was given that opportunity, but there are a lot of others of us just waiting in line. The Thompson sub-machine gun is something of an enigma. It was originally designed to fulfill a role in the First World War as a “Trench Sweeper” to sweep enemy troops from trenches in close quarters combat and could have served that role well had it not been for the fact that the war ended before it could be manufactured and deployed. Yet the Thompson was to go on and find roles in historical events that the Thompson’s inventor did not foresee.

This Thompson was manufactured new by the Auto Ordnance Corporation of West Hurley, New York when they resumed production of this classic gun 1975.

To see the sale page for the late production classic Thompson pictured above click here.

But there is much more to the Thompson than just being an efficient combat weapon. It stands out as being quite different to other weapons of war in that it has a unique character that sets it apart. Created by General John T. Thompson back in 1915-1916 his initial notion was to create an automatic rifle. Thompson’s idea was to create something more like the later “assault rifle” that was subsequently invented by the Germans during the Second World War. John T. Thompson’s idea was to create an automatic rifle that would be easy to manufacture. He envisioned it to be light, and capable of delivering overwhelming fire power.

This Thompson is a late production example made in the 1975 and later production run.

To see the sale page for the late production classic Thompson pictured above click here.

This 1942 production Thompson is of the simplified type re-designed to enable quick and inexpensive wartime production.

To see the sale page for the 1942 wartime Thompson pictured above click here.


General Thompson re-adjusted his thinking and the rifle designed fired the .45ACP cartridge, a cartridge that had an excellent reputation as a man stopper at short range, and created his sub-machine gun with fully automatic capability to be used in situations where the ranges were short and the enemy many. It was to become a gun that would prove its worth in jungle warfare and urban warfare. It was a gun that would be carried in the scabbard of US Army courier riders on their Harley-Davidson WLA motorcycles and it would be used by British and Australian soldiers in Malaya, Burma and New Guinea.

This is a late production Thompson made in the simplified World War 2 style.

To see the sale page for the late production simplified style Thompson pictured above click here.


Prior to the Second World War the Thompson sub-machine gun was adopted by the US Marines for use in the Nicaraguan “Banana Wars” and in China. Quantities were also purchased by the Irish Republican Army but it was their acquisition by Chicago gangsters that ensured their notoriety and ensured that police departments that had to deal with the gangsters and their anti-social habits also acquired them. 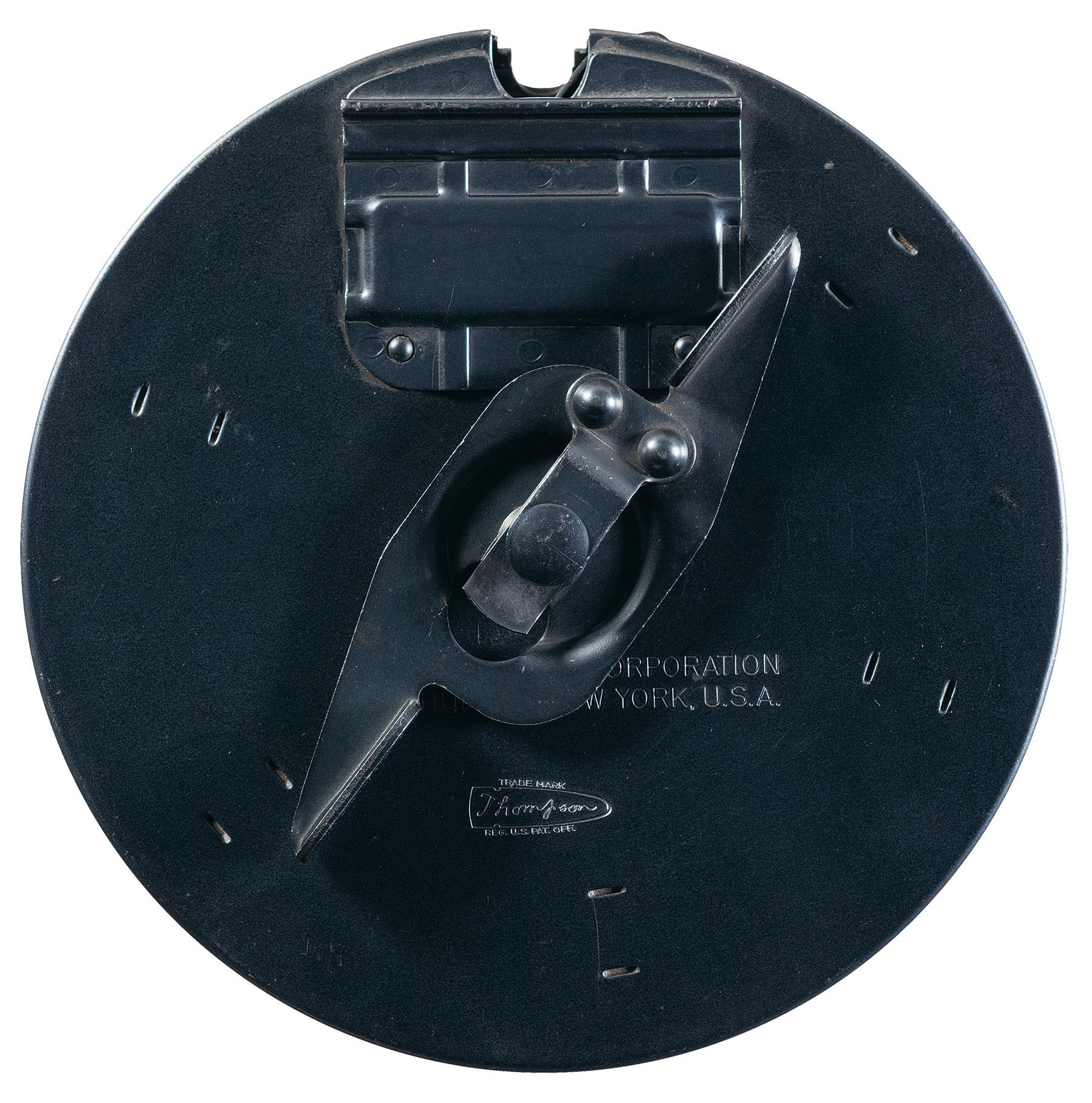 Drum magazines such as this one are most commonly associated with the Thompson despite the fact that the less dramatic looking stick magazines turned out to be more practical and quieter.

If you have a desire to acquire a Thompson or two for your collection, or just to enjoy out at the shooting range then the four Thompsons pictured above are coming up for sale by Rock Island Auction. Each one is capable of fully automatic fire and so require a Class III authorization. These guns are in accordance with National Firearms Act (NFA), fully transferable Class 3, which is registered with the Bureau of Alcohol, Tobacco, Firearms and Explosives, (BATFE) under the provisions of 18 U.S.C. Chapter 44 and 27 CFR part 478.

Thompsons were never an inexpensive gun to purchase or to use but this auction offers the opportunity to acquire an icon of world history and one of the most interesting guns to own and to fire.

Winston Churchill certainly seemed to enjoy his time at the shooting range with one. 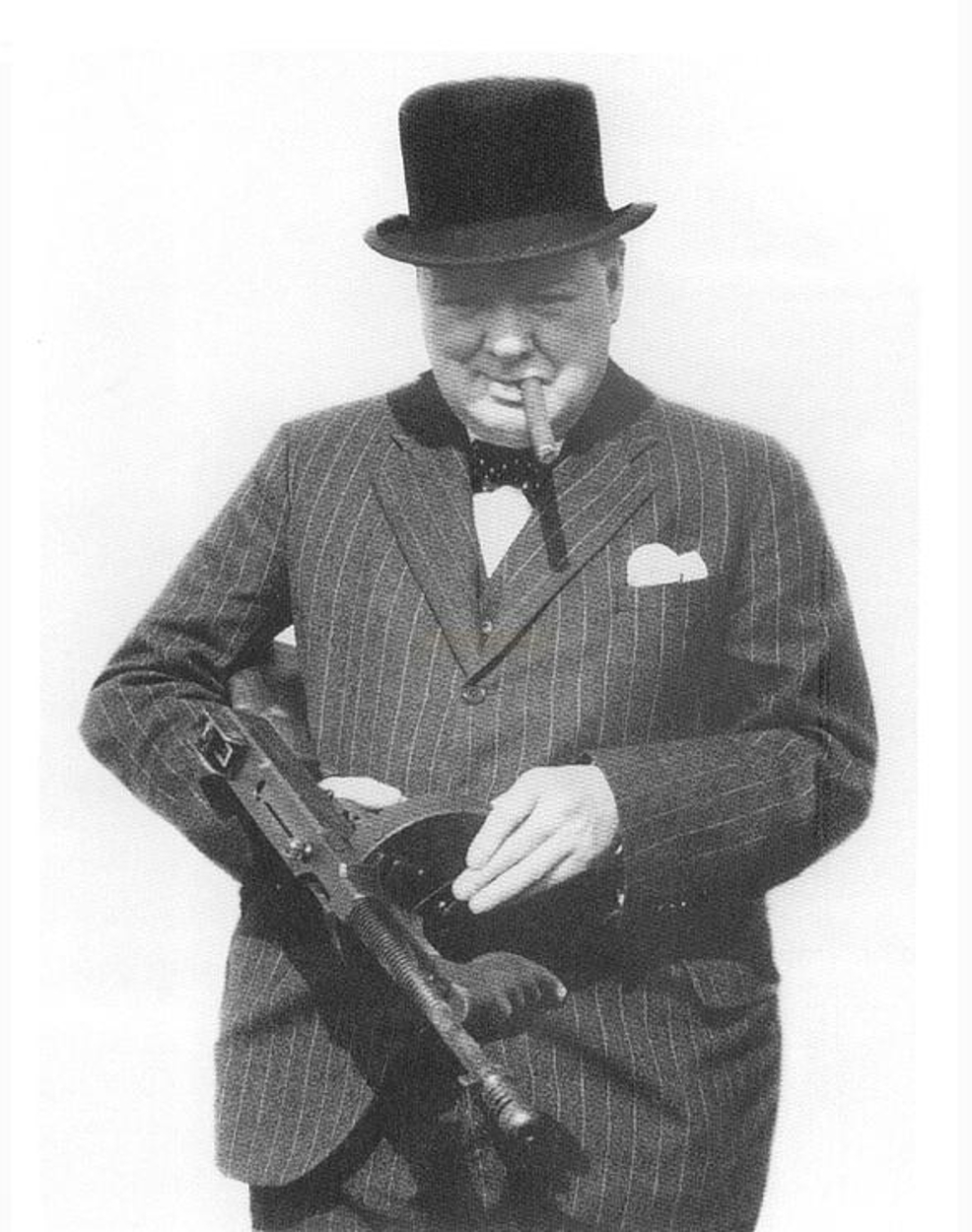 (All pictures courtesy Rock Island Auctions except as otherwise noted).