The 7×66 Super Express Vom Hofe cartridge has enjoyed a dedicated following in Europe but is almost unheard of in the United States. It is a cartridge that has recently experienced something of a renaissance however as it has been effectively redesigned and reborn as the 28 Nosler: the principle difference between the 7×66 SE vom Hofe and the 28 Nosler being in the neck angle of 35° for the 7×66 SE and 30° for the 28 Nosler. The 7×66 SE however has one aspect of its design that remains unique (at least to the best of my knowledge), and that is that it features a double venturi shoulder that forms when the cartridge is fired.

The 7×66 SE Vom Hofe express is quite unique in that it features a double venturi shoulder that forms when the cartridge is fired. (Picture courtesy cartridgecollector.net).

Back in the 1930’s when the 7×66 SE Vom Hofe was created there was a great deal of thought going into cartridge design and part of that thinking was in optimizing the gas flow from the cartridge case into the barrel to propel the bullet in the most efficient way possible. Ernst August vom Hofe was involved with a number of the most notable names in German gunsmithing during this period: he had worked with Wilhelm Brenneke and been an assistant to Herman Gerlich before forming a partnership with Richard Schienmann to form Hofmann Waffen und Munition in Berlin in 1930. The name “Hofmann” was made by merging the two men’s names, vom HOFe+SchienMANN.

In Europe and Britian during the pre-war years reloading was largely unheard of and European ammunition makers made it quite difficult for anyone who might have wanted to reload their own ammunition for either cost saving or for rifle and ammunition tuning. British ammunition makers were using corrosive mercury fulminate primers which made the brass unsuitable for reloading. In Europe this tended not to be the case with non-corrosive primers being much more common, especially for quality sporting ammunition. However European ammunition almost universally used Berdan primers which made de-capping a cartridge case more difficult. The upshot of this was that Ernst vom Hofe’s 7×66 Super Express could use a shoulder that would fire-form into a double venturi, leaving a very short neck to retain the bullet, because the bullet had already left the case and it didn’t need to perform that task anymore.

An example of a reloaded 7×66 SE cartridge. Note that the fired case now has a very short neck with which to provide support and neck tension for the bullet.

The 7×66 SE Vom Hofe was based on the .404 Jeffrey cartridge case necked down to take 7mm bullets, just like the modern 28 Nosler. The Germans were applying a thoroughly scientific approach to the development of propellant powders and so not only were their cartridge designs scientifically thought through but also the powders that drove the bullet and the primers that ignited the charge. However, there was also a desire to state test velocities from these new cartridges that would impress potential buyers into wanting a rifle made in one of these new proprietary cartridges. To this end test barrels were often 75cm (29.5″) long. This ensured that the large charges of slow burning powder would produce very impressive ballistics tables. That being said the ballistics chart below produces results identical with those for the 28 Nosler with a 26″ barrel. So we can reasonably surmise that the results shown below were taken from a 65cm (25.6″) barrel. 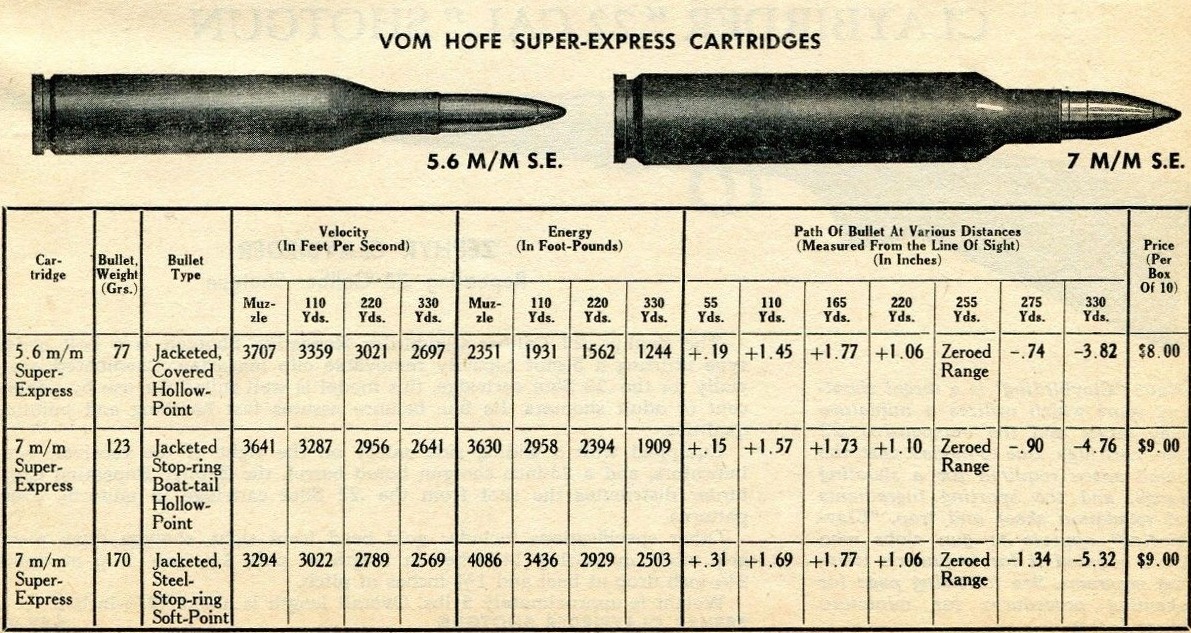 Ballistcs chart for two of Ernst vom Hofe’s cartridges; the 5.6×61 and the 7×66 Super Express.

For comparison here is the loading data for the 28 Nosler using their 120 grain Spitzer bullet. As you can see the two cartridges are ballistic twins.

Load data for the 28 Nosler. Compare this with the ballistics above for the 7×66 SE and you’ll see they’re near identical with the 123 grain 7×66 SE. (Picture courtesy Nosler Bullets).

The heavy bullet loading for the 7×66 SE is with the unique 170 grain “ToSto” Torpedo Stopring. Below is the Nosler Bullets data for the 28 Nosler with 175gn AccuBond and Partition bullets. 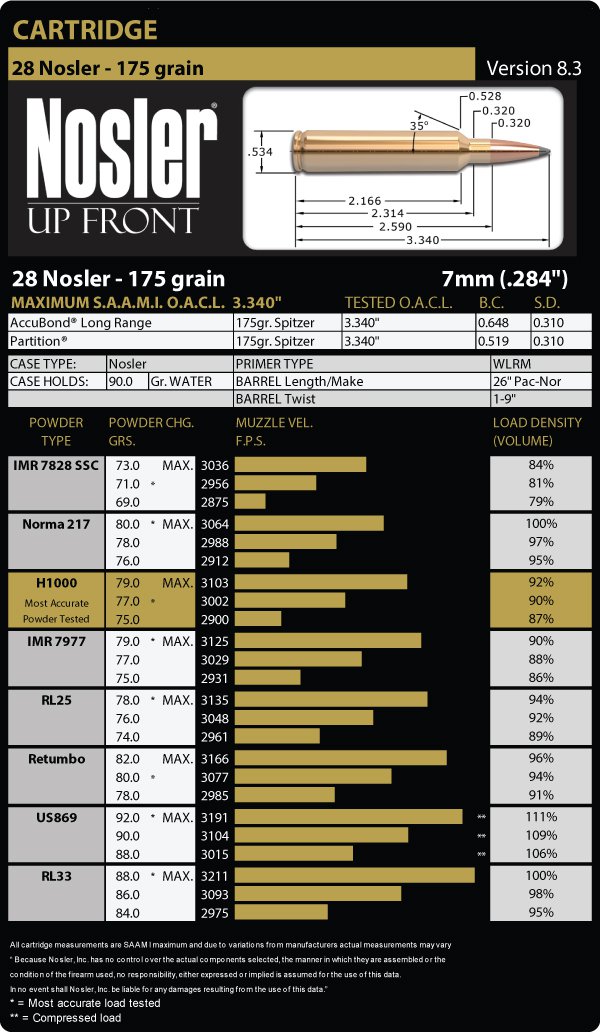 Nosler bullets load data for the 28 Nosler with the 175 grain AccuBond and Partition bullets. the last listed loading using RL33 is near identical with the 7×66 SE 170gn ToSto bullet loading. (Picture courtesy Nosler).

As can be seen above the load data for the 28 Nosler from a 26″ barrel for the slightly heavier 175gn AccuBond bullet the performance is near identical with the 7×66 SE using the Stropring-Geschoß (“ToSto” bullet or Torpedo Stopring). This is especially true if you look at the last couple of load data using US869 and RL33.

The Post-War Period and Walter Gehmann

After the end of the Second World War as Germany began to re-build Walter Gehmann, a gunsmith of Karlsruhe established his business in 1949 and in 1955 he took over the “Vom Hofe” trade name: Ernst vom Hofe had passed away ten years earlier in 1945. Walter Gehmann promoted and improved the cartridge and is credited with the design of the Stropring-Geschoß “ToSto” Torpedo Stopring projectile associated with the 7×66 SE. The Stropring-Geschoß ToSto bullet has some similarities to the Wilhelm Brenneke designed TIG and TUG bullets. They all feature a nickel plated steel jacket and provide a front section that is typically designed to fragment once the bullet is in the body of the game to maximize instantaneous vital organ damage. The core in the rear portion of the bullet is held to the jacket by a ridge inside the jacket to keep the rear section contained within it. This rear section of the bullet continues after the front section has fragmented and ensures complete penetration. 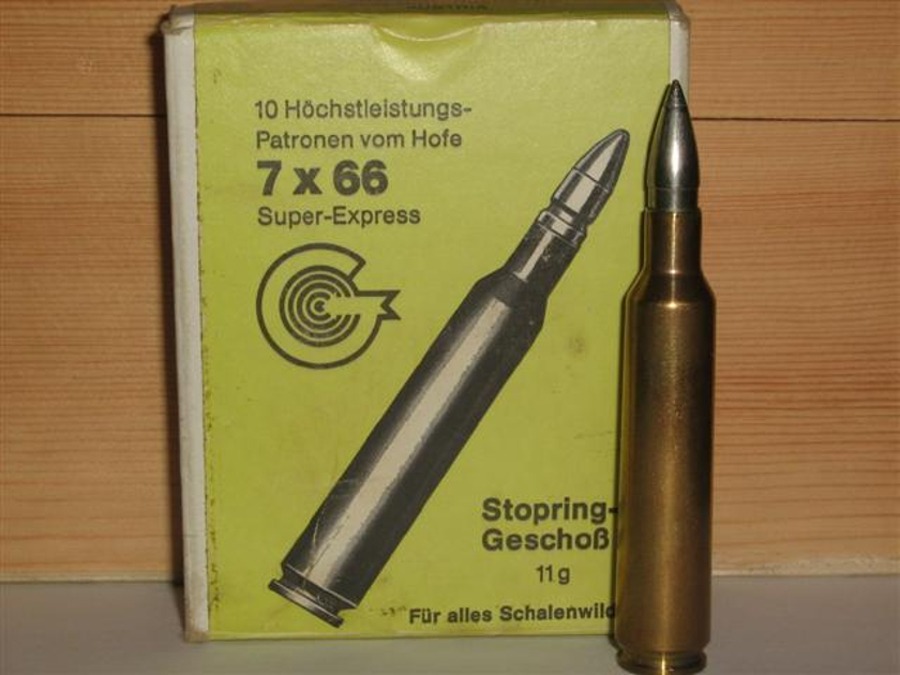 7×66 SE ammunition by Geco loaded with the Stropring-Geschoß “ToSto” bullet. Note the similarity between this bullet and the Wilhelm Brenneke TIG and TUG. (Picture courtesy cartridgecollectors.org).

In the Stropring-Geschoß bullet the reinforced section of the jacket has a reduced diameter to ensure it does not cause excess pressures. It would appear that this bullet went through design changes during the years of manufacture as there are some apparent differences in the diagram above. The 7×66 SE was loaded by a number of makers although the cartridge may have been manufactured on behalf of Walter Gehmann as his name appears on the headstamp of numerous examples. 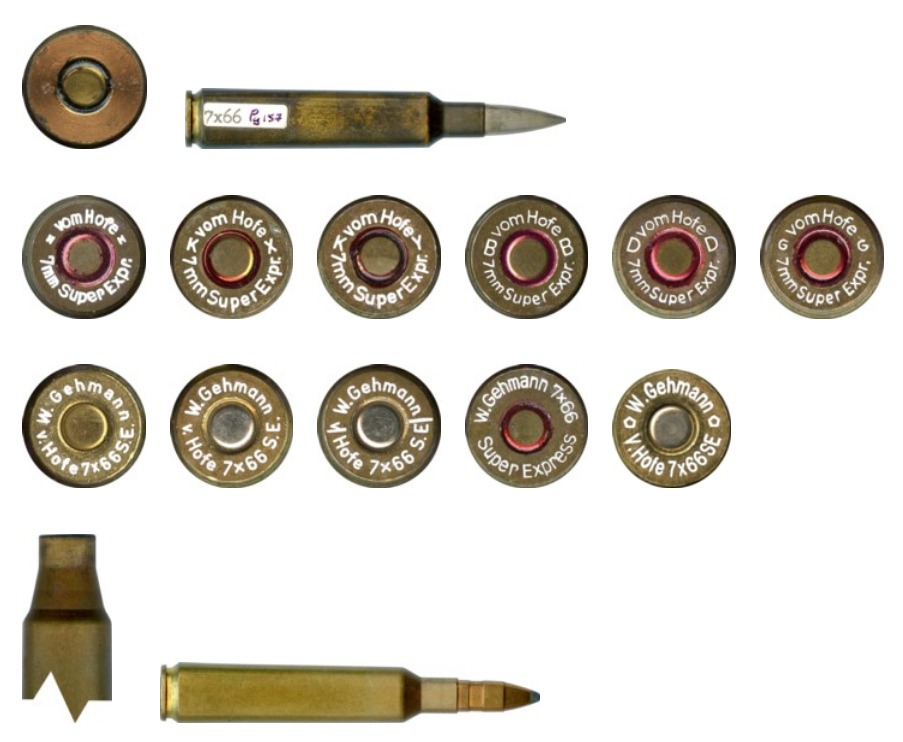 7×66 SE cartridges often have Walter Gehmann’s name on the headstamp indicating they were manufactured for him. Also note that the design of the ToSto bullet at bottom is different to the one illustrated in the previous picture. (Picture courtesy cartridgecollector.net).

The 7×66 SE was loaded with a range of bullets both European and American. 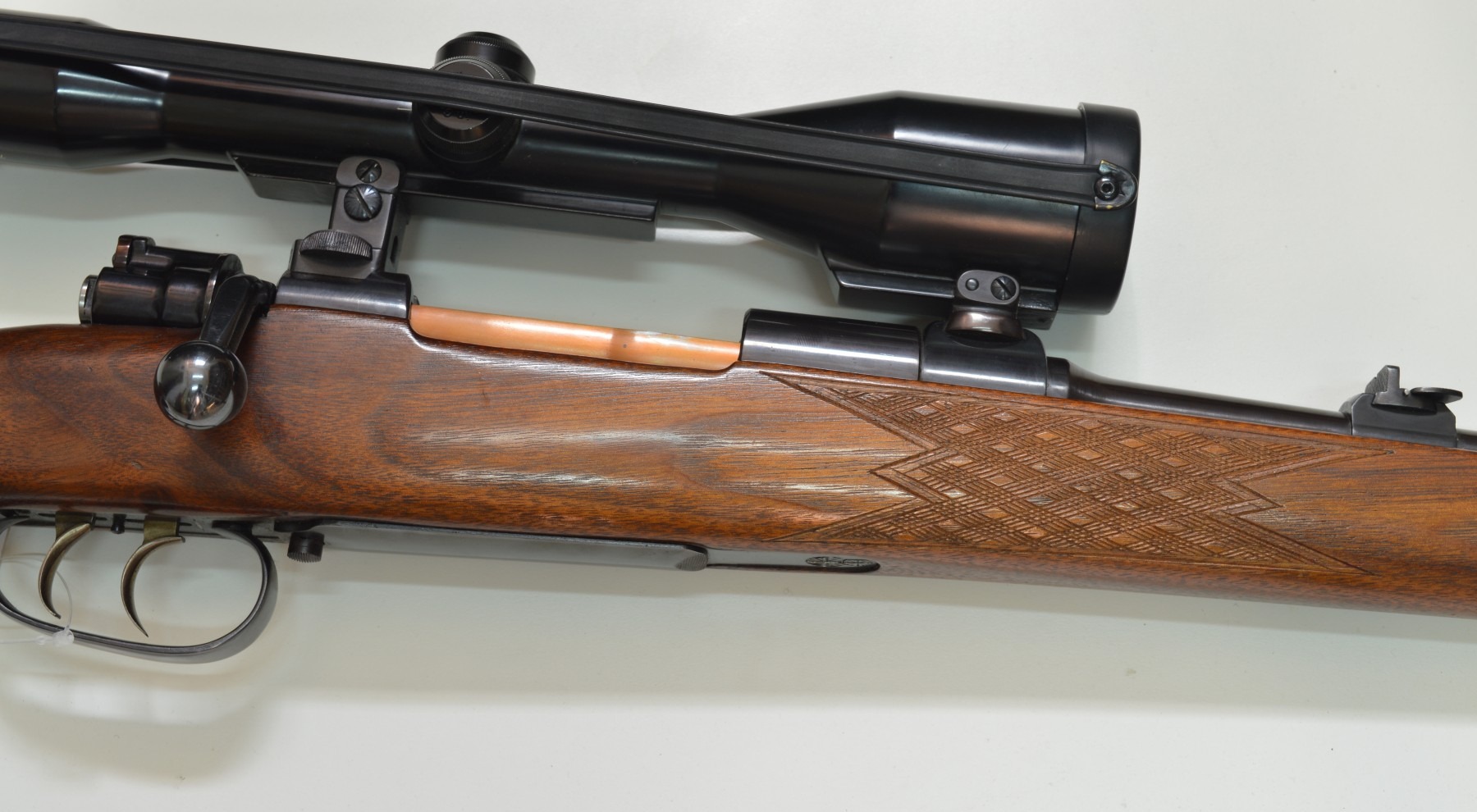 (Note: You can find the sale page for the above rifle if you click here).

The 7×66 SE was not only chambered in bolt action rifles however but also in single-shot rifles. Given that the cartridge produces the pressures of a high intensity cartridge such single-shots needed to be solidly constructed. In the video below courtesy WaffenlandTV we see a 7×66 SE single shot in action.

During the 1960’s Walter Gehmann finalized his own design for a bolt action rifle and arrangements were made with Mauser to manufacture it. This rifle became known to the world as the Mauser 66 and it incorporated a telescoping bolt action which featured both a short bolt and a slide. The advantage of this action was that it made the rifle significantly shorter, and the Mauser 66 was one of the early rifles to feature interchangeable barrels so that one rifle could be adapted to a number of calibers. 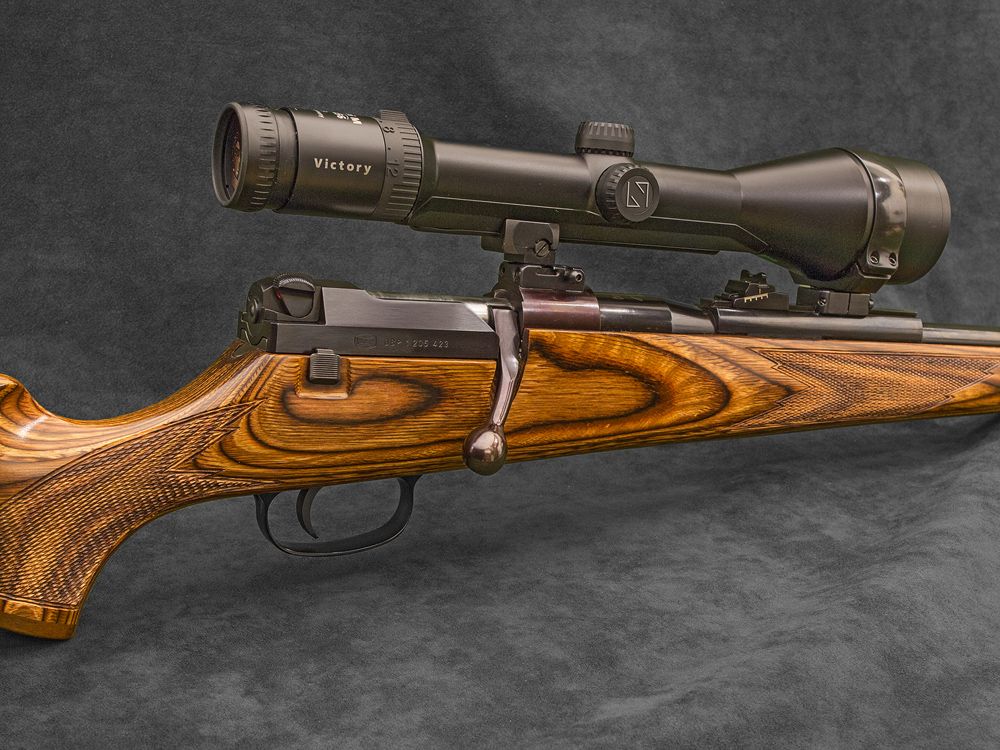 (Note: You will find the sale page for the above rifle if you click here).

Rifles in 7×66 SE are not common, but they do turn up, and will commonly be high quality rifles that have collector value, but which are also just begging to be put back into action. Reloading dies have long been made by RCBS or Huntingdon Die Specialites so it is possible to get a 7×66 SE rifle shooting again. There was a forming die set made to form 7×66 SE cases from .404 Jeffrey brass although it should also be possible to use 28 Nosler brass. Given that the 28 Nosler is almost identical that should be possible as long as the 28 Nosler brass can be resized to a “crush” fit in the 7×66 SE for fire-forming. The principle difference between the two is that the 28 Nosler’s shoulder angle is 35° while the 7×66 SE is 30°.

Would it be worth the trouble of having a custom 7×66 SE rifle built nowadays? The short answer is no. The vom Hofe design creating the double venturi shoulder during firing is interesting, but it creates problems for the reloader because it leaves a very short neck to support the bullet and provide adequate neck tension. If one wanted a rifle as close as possible to a 7×66 SE it would be best to opt for a 28 Nosler which is its ballistic twin and also its dimensional near twin.

The 7×66 Super Express Vom Hofe is an interesting and quite unique cartridge. Its double venturi shoulder has fascinated many, but the idea that such attention to gas flow would be advantageous turned out not to be so. Others created cartridges with similar but more simple gas flow streamlining, such as August Schuler’s 6.5×68: but in the post war years shoulder angles became sharper or in Roy Weatherby’s case double-radiused, and most of the German designs of the 1930’s slipped into obsolescence: the 7×66 Super Express Vom Hofe was one of those.